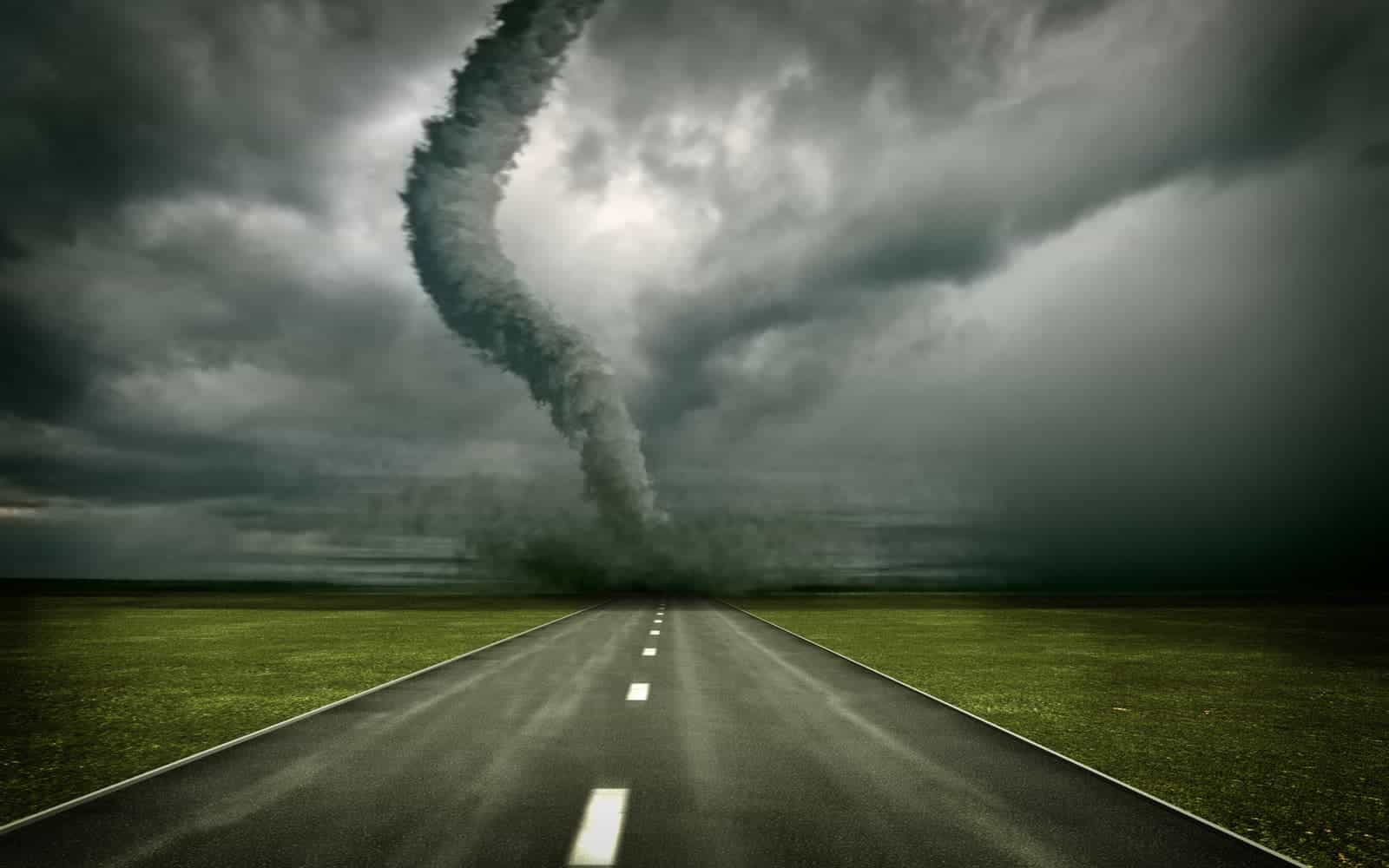 Tornados and related severe storms show the real power and destruction that Mother Nature can dish out.

Rather than go out and brave the actual elements, this is a much safer and saner way to spend your time.

Many movies have captured or reimagined these atmospheric events in interesting, telling, and even hilarious ways. Some of these films are bad to the bone, and some are a bit bad, but they are all entertaining.

Face it; most people love to watch things get destroyed in movies. There is a certain amount of twisted satisfaction watching a skyscraper fall or a city block getting wiped out.

It is like playing with building blocks as a kid. Making the tower is fun and challenging, but knocking it down is so devilishly satisfying.

One movie is a documentary, so the real, serious, and heartbreaking reality of tornados is also included.

So stay inside, maybe near a fire, snuggled with a significant other or a furkid. Or maybe with a ton of blankets and a warm drink.

Whichever way you choose to partake, here are ten great choices and one bonus movie for you to enjoy while “the storm rages on” outside. Elsa, thank you for the mini-quote from Frozen, another storm movie.

Let's start with a nuclear power plant and say, throw in a tornado (surprise, surprise) to make things interesting in this small town in West Tennessee. Don't worry; we have Sharon Lawrence running the nuclear plant and Mark-Paul Gosselaar as a deputy both working to save the day. But can they?

Don't be fooled by the first few minutes of this movie. Mr. Roger's Neighborhood meets Babe opening quickly turns into the disaster sequence that you want to see.

My favorite lines from the movie are: “Great, we are in a nuclear power plant, and we can’t get power.” “This is no time for irony, Potter.”

Speaking of irony, there is one particular and most appropriate game that finds its way in the movie. How it has never been featured in any other tornado disaster flick, I have no idea. Kudos to the writer or director who included this scene.

The drama is intense with this one. There are plenty of twists and turns to keep you on your toes while you hopefully still stay on the ground. The film is very loosely based on the F2 tornado that hit the Davis-Besse nuclear power Station in Ohio in 1998.

The government. Are they there to help? Or is this some nefarious conspiracy? Is the local police in on it also?

This movie does move in directions that are so unpredictable you might consider the title completely misleading. In fact, the movie is known by another name, but it is a huge spoiler so don’t go looking for it before you watch the film. Rest assured, there are tornados in this.

The writer obviously had free reign to take this screenplay, “Where no tornado has gone before.” I will not spoil this storyline for you but wow, is it something else that is definitely worth watching once.

Favorite lines: “There is no plan. You are just making this stuff up as you go along and hoping this whole thing will blow over.” “Blow over. Oh, that is clever. Be careful sheriff, because clever isn’t always smart.”

Since the days of Airport and The Towering Inferno, TV has been the home of the major disaster films. CBS gets back to this tradition with the 3-hour miniseries Category 6: Day of Destruction.

This superstorm, consisting of 3 storms converging on Chicago, is going to wreak havoc on the city. Throw in some power outages, life-threatening extreme heat, and Randy Quaid, and this is definitely worth watching.

Nancy McKeon is outstanding as a reporter trying to gather all the facts and expose the truth about the city’s power issues. Brian Dennehy is impressive as the head of the National Weather Administration’s Severe Weather Center.

Randy Quaid provides some comic relief, while nearly reprising his Independence Day role, as the wild storm chaser Tornado Tommy. Dianne West convincingly plays the tough as nails Energy Secretary who does what it takes to help Chicago obtain the desperately needed resources.

Yes, this move is long. Try watching it in 2 parts, just as it was presented. Yes, the CGI is dated now, but at the time, it was as good as any “big-budget movie.” Yes, there is a chance people might not like all the dialogue. Everyone should watch it anyway.

Favorite line: “ “Whoaaa baby, we are going for a ride!”

Storm Chasers. Sarah Wayne Callies. Sorry folks, there aren’t any zombies in this film TWD fans. Sarah is the weather expert for a hi-tech storm chaser team that lost their only sponsor. It is now or never for them to get results to keep them afloat.

The ”found footage” style from different viewpoints is mixed in with a cinematic camera, which can be confusing at times. The CGI is outstanding with some of the best looking tornados on film.

One scene, in particular, is really cool when a character goes up into the eye of the storm. Of course, there is also the airport scene, which was part of the trailer. I am sure the passengers on the planes received some bonus miles or a coupon for their very unexpected short flights and for their trouble.

The Titus is the amazing Storm Chaser vehicle which can even anchor down into the ground. It has a viewing turret that can spin 360 degrees for viewing those oh so close tornados that try to sneak up on the chasers.

Favorite line: “Grab a broom. It is like a Zombie Apocalypse out there.”

This made for TV movie is loosely based upon the book by the same name by Ivy Ruckman. The book was a generalization of a real event that involved seven tornados that hit Grand Island, Nebraska, in 1980.

The story surrounds a family and how they were split up by circumstances. They struggled to find out what happened to each other as well as trying to find one another.

Luckily the son who occasionally had trouble taking responsibility took it by doing something illegal and ignoring a police officer. Because that is what responsibility is all about.

Random acts of observation: Beware of flying trash can lids. When that tornado siren blasts, get to shelter fast. The interior house scene, as the tornado hit, has some cool practical effects. When you get to a shelter, stay at the shelter. Harmonicas are your friends.

Favorite lines: “All you can do is hope the best and prepare for the worst.” “ You can’t play Nintendo on an empty stomach.”

Possibly the pinnacle of all tornado movies, Twister is the force to be reckoned with. This has been the weather disaster feature upon which all others have been judged by for over two decades.

There are numerous iconic scenes, including the cow, the house, the water pipes, the farm, the drive-in movie theater, the tanker truck, the cornfield, Dorothy, Aunt Meg…the list goes on and on.

Although the graphics have aged, the story has not. Amazing, meaningful, touching, endearing, hopeful, exciting, devastating, and thrilling all correctly describe this film.

One thing Geeks did learn from this movie was always to have full coverage on a brand new truck.

“Cow. Another cow.” “Actually, I think that’s the same one.”

One boat. Three storms were converging into one. One massive wave, preceded by many other waves.

The Perfect Storm is very loosely based upon the book by Sebastian Junger. No one knows what happened to the real boat since it sank without any survivors.

The bills are not paid. The swordfish is not biting. The crews' significant others do not want them to go out again. So, what do they do? Of course, these “manly” men go out to provide for their families and not be defeated by the ocean.

Favorite lines: “Billy, get outta there! You’re steaming into a bomb, turn around for Christ’s sake!”

“Christina, can you hear me? I don’t know if you can, but I’m talking to ya. I love you now and forever. No goodbye. There’s only love, Christina, only love.”

“It’s not that Skip. I’m out here because I need the money.”

Tornados, superstorms, hail storms, massive storm surge flooding, and flash-freezing events. This is the royal flush of weather disasters in a card game that no one can win. For those in the snowcone business, they definitely will take a hit.

Hailed for its stunning visuals and based upon the book, The Coming Global Superstorms, this massive undertaking of a movie resonated with audiences. This time another Quaid, Dennis, is the main character searching for his son despite impossible odds.

The weather patterns quickly and dramatically change, altering the climate of the entire northern hemisphere. Keeping warm becomes the most important aspect of survival. Having a character named “Elsa” in the movie probably explains it all, but that scene must have hit the editing floor.

“His son is in Manhattan. I just thought you should know that before you start questioning his motives.”

Containing arguably the most famous tornado of all time, The Wizard of Oz is the oldest film on this list. You might have heard of it before. It is based on L. Frank Baum's 1900 children's book The Wonderful Wizard of Oz.

Of course, this movie has it all. A “flying” house. Witches and a wizard. Colorful scenes. Beautiful singing. Villians. Flying monkeys. A quest. Even a hot air balloon. And yes, the one-way tornado.

Favorite Lines: “Some people without brains do an awful lot of talking, don’t you think?”

This documentary film is about the Moore, Oklahoma families that were affected by an F5 tornado in 2013. A story about a community. Devastation. Hope. Anger. Twenty-four lives were lost; hundreds of others were injured.

Moore had four tornados EF4 or greater hit between 1999 and 2013. Since the storm was predicted to hit that area, a group of volunteers on the way to help unfortunately also got caught up in the tornado.

The individual family stories are both heartbreaking and inspirational.

That’s the Top Ten, but Wait…we Have One More.

A list of this type is totally incomplete without the most prominent social media influenced movie involving a tornado…Sharknado!

I guess that everyone has either already seen or at least heard of Sharknado. At the time, the little known company The Asylum, struck shark teeth gold with their “flying out of tornados” sharks attacking grounded humans.

This freak phenomenon of tornados being able to lift sharks out of the water and onto land where they do what sharks do best, prey, and eat is the brainchild of Thunder Levin. Let's say this doesn't

You can also try watching this with others to help keep of how many people die and in how many different ways. Some serious Sharknado parties have even made up bingo cards to fill out which include the above

You'll laugh, you'll cry, you'll duck, or you'll die could have been a tagline for Sharknado. For a lighter take on the whole, end of the world weather scenario, this is your best option. You can read a previous blog that Brian wrote about the Sharknado series did right here.

This blog has been edited and expanded by Brian Piotrzkowski.

Cheap Meal Plans Under $75 Weekly for a Family of Four