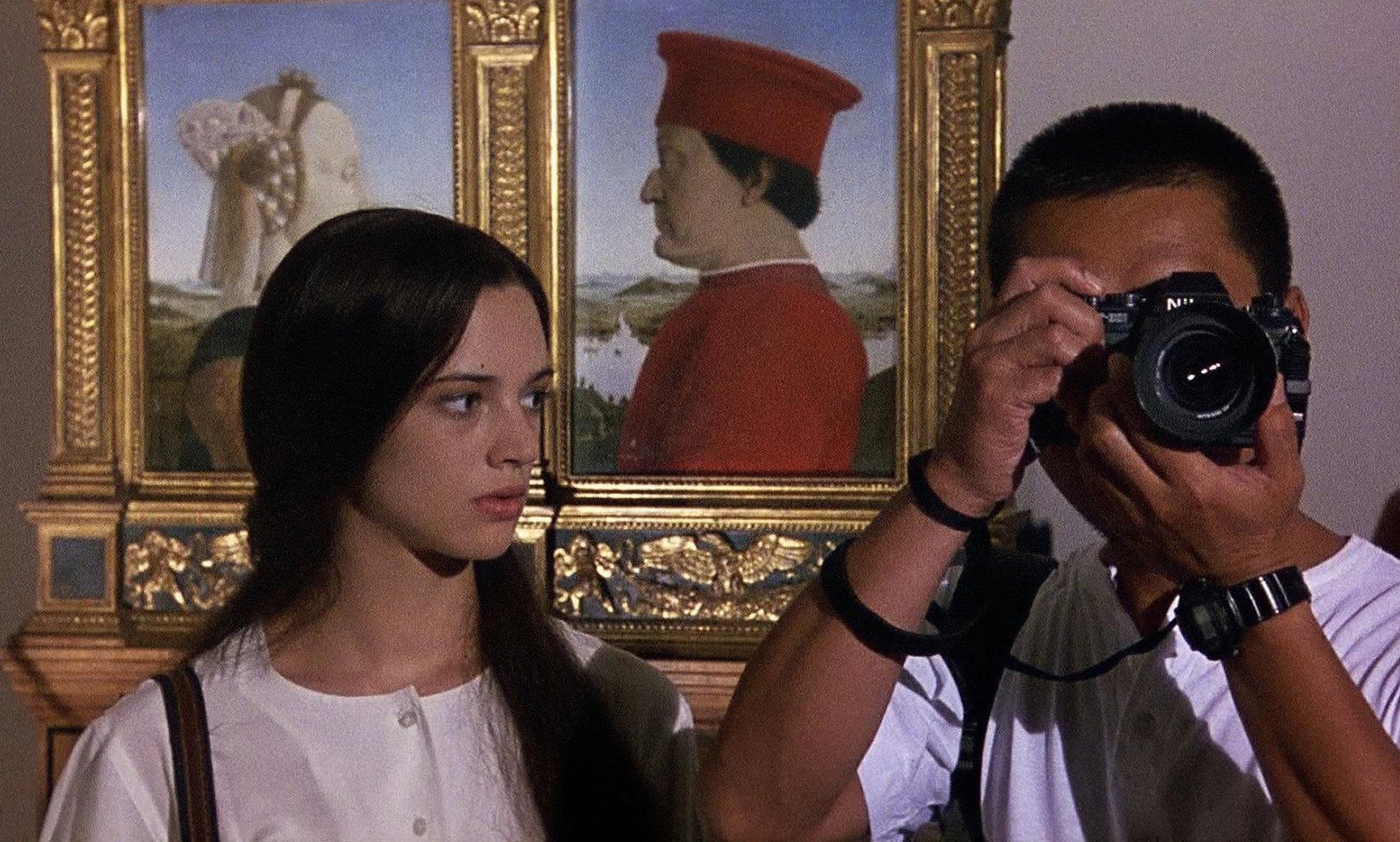 From the classic thrills of the 1980s to laughably bad horror films that we love to hate. We even love reading horror books and comics filled with over-the-top ghoulish hosts and post-apocalyptic zombies.

Lynch’s greatest film doesn’t usually get listed as a horror film, but it’s easily the most terrifying movie of the decade. The director’s usual themes and obsessions—doubled identities, dream imagery, incongruous flashes of innocence—take on an unbearable weight as the quirky opening sequences turn into a narrative of brutal sexual abuse, incest, and violence.

Abusive father Leland Palmer  (Ray Wise) has a pleasantly lived-in face across which rage, confusion, and a chilling normality flicker like ominous shadows. But it’s Sheryl Lee’s Laura Palmer who carries the film as a good girl who is actually a bad girl who is actually seeking desperately for some way to protect herself and others from a power more sweeping and more evil than that of any supernatural demon or serial killer.

David Cronenberg’s oddest, funniest, and most heartbreaking body horror movie is this semi-biographical film. It’s sort of about the writing of William Burroughs’ novel Naked Lunch, sort of about Burroughs’ possibly accidental murder of his wife, and sort of about espionage networks distributing the Black Meat of giant aquatic centipedes as a hallucinogenic narcotic.

The movie includes some of Cronenberg’s most vivid nightmare imagery, including a scene of the impassively amused Peter Weller as the Burroughs character sensually spreading heroin/bug killer on the talking asshole of a giant cockroach. Even more memorable is the film’s narrative, with images, fragments of dialogue, and themes recurring and rhyming out of order, but with an inescapable dream logic, like the sliding blocks of off-kilter sax squiggles on the wonderful Ornette Coleman soundtrack.

Audition starts off as a comedy about widower Shigeharu (Ryo Ishibashi) seeking new love by setting up a film project and secretly auditioning the applicants as dating prospects. That’s a little creepy, yes. But then things get a lot creepier when Asami (Eihi Shiina), the woman he chooses, turns out to have lied to him as well, and even more dramatically and effectively. Also, what’s in that mysterious thrashing bag in her apartment, anyway?

Director Takashi Miike delights in over-the-top violence—no one has ever radiated as much joy while sawing off a foot as Asami does. But the film is much more than just a gorefest, as the line between abuser and abused crumbles along with chronological narrative and reality itself. Audition jams a steel needle into the male gaze, though whether Miike wants to cut up men or women on it is unclear. He may be auditioning both.

Barton Fink is the Coen Brothers’ only foray into the horror genre, but they plaster on a lot of the tropes. Earnest playwright of the working class Barton Fink (John Turturro) takes up residence in an eerie hotel room, with peeling wallpaper and out-of-season mosquitoes. Its corridors soon open to reveal bellowing serial killers and a nightmare of fire and blood.

The Coens throw in their usual snappy patter and indelible character acting too, especially in the form of supposedly-but-not-really common man Charlie Meadows (John Goodman). The result is a film in which Hollywood itself becomes a kind of abyss, with the guffawing, fast-talking devils in suits vying to cut off the life of the mind that Barton values so highly. They store it in a box he can never open.

Francis Ford Coppola’s campy gothic aesthetic arguably found its perfect subject not in the mob, nor in the Vietnam war, but in this gloriously bloated monster pic.

Contrary to the title, the movie is not particularly true to Stoker’s vision (I’m pretty sure there wasn’t an explicit werewolf scene in the 19th-century novel).  What Bram Stoker’s Dracula does have, though, is luscious visuals, an incongruous Hollywood doomed love story, and Gary Oldman practically crawling headfirst down his own melodrama to sink his fangs into the scenery. The dynamic between his Dracula and Keanu Reeves’ stiff-as-plasterboard Jonathan Harker is spectacularly, gloriously ridiculous. It makes you wish Coppola set his self-seriousness aside and just indulged in toothy genre romps more often.

Michael Haneke’s film received a solid American remake ten years later, but the original remains the thing to watch. Two apparently affluent young men, Paul (Arno Frisch) and Peter (Frank Giering), stroll into the home of Anna and Georg Schober (Susanne Lothar and Ulrich Mühe) and casually terrorize them for hours by forcing them to play a series of degrading and life-threatening games.

The film has often been read as Haneke’s sadistic fantasy of torturing the bourgeoisie. But it also is a drawn-out parable about utter helplessness before the whims of the bored and wealthy. Haneke keeps almost letting the Schober’s escape or revenge themselves. But every hope is systematically pulled away from them, as if God himself is on the side of cruelty.

I’m among those who think the 2021 Candyman is the best of the franchise. But the original is still a classic. Set in Chicago’s Cabrini Green housing project where a white anthropologist is studying urban legends, the movie’s forthright engagement with white appropriation and racial violence was virtually unprecedented in horror, or in most genre film of the time.

The film’s fractured narrative at times has an eerie dream logic, and at times just seems to be poorly constructed. But Tony Todd as the hook-handed Candyman always makes sense. His voice is honey and sex and dread—one of the few movie monsters who manages to be both truly terrifying and truly seductive. You can see why people would look in the mirror and say his name, no matter what the consequences.

It’s appropriate that the film can’t be contained in a single decade since it is a film about boundaryless amorphous masses. Young Bill Whitney (Billy Warlock) slowly realizes that his family and their friends are all inhuman shape-shifters who engage in orgiastic group sex incest rituals known as “shunting.”

Most of the film is a pretty standard Cold War paranoia body snatchers riff. The climax, though, is something else: a massive KY-jelly drenched special effects ooze extravaganza, in which director Brian Yuzna pulls out all the special effects. People are devoured by slime and turned inside out. Heads form out of rear ends and start to cackle. Everyone turns into a single thrusting throbbing puddle. Sometimes the best horror movie is the one where you leave saying, “I can’t believe they did that. I don’t even know what that was.”

The Stendhal Syndrome is not one of Dario Argento’s best-known films, but it’s arguably one of his best. Argento’s daughter Asia (Anna Manni) plays a detective who suffers from Stendahl Syndrome; she experiences hallucinations when viewing art. After being overcome in a museum, she is sexually assaulted—and then both takes revenge upon and merges with her abuser.

The film is a dig at critics of horror films who, like Anna, have trouble distinguishing art from life. But it’s also about how reality and patriarchal narratives become tangled together, and about how revenge can be part of a cycle of abuse rather than an escape from it. Like the paintings that overwhelm Anna, it’s an art that makes you despair.

The viral marketing campaign was a bit numbing for those of us who experienced it, but if you can put that aside, The Blair Witch Project gets onto the list through sheer audacity.

The found footage genre is an old rusted ax by this point. But two decades ago horror had seen nothing quite like this 81 minutes of shaky-cam footage pulling terror out of nothing but some trees and a bleak prayer to dark gods. Heather Donohue playing a character named Heather Donohue set the genre’s standard for non-acting acting as she vacillates between irritating nagging and escalating terror. The bizarre, elliptical ending remains one of the best jump scares, and one of the oddest images, in horror.

Besides The Silence of the Lambs the other most-often cited movies of the 90s is probably The Sixth Sense. Which, unfortunately, I also don’t like that much. (Keep the hokey movie of the week sentiment out of my horror, M. Night Shyamalan!) Another standard, Scream, almost made it through, as did  Peter Jackson’s Dead Alive, John Waters’ Serial Mom, and the delightful horror-action Brandon Fraser version of The Mummy.