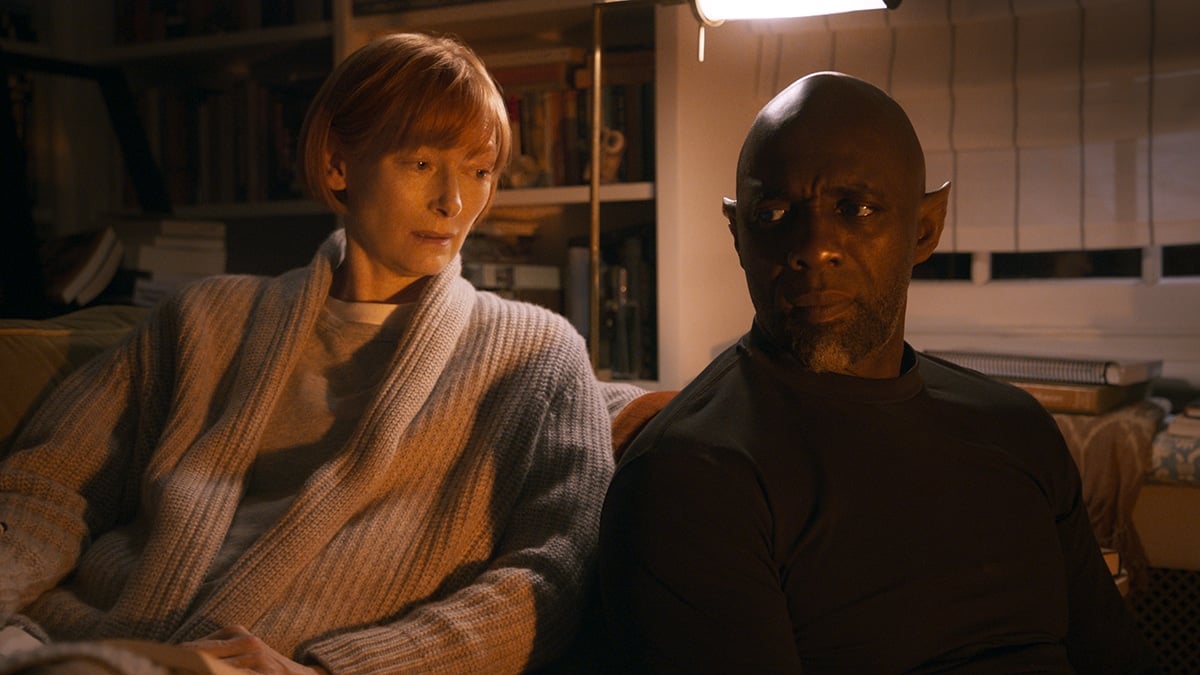 Three Thousand Years of Longing is a story obsessed with stories and our need for them. By its nature, it would ultimately be all about us, since it is the ultimate self-obsession to tell a story that is all about the stories we tell. As the movie goes back thousands of years in its exploration of myths and cultures that will be more unknown to Western audiences, the ultimate question is whether our own is ending. Or it would be if Longing didn’t get so distracted and succumb to a few of our more pernicious myths in the process.

Like many a strange cinematic journey, this one stars Tilda Swinton, who is more down to earth than usual in her role as Alithea, a scholar of the stories mankind has told over the millennia. Per usual for a female character created by men who is meant to invoke lofty thoughts, Swinton is dressed both down and conservatively, with the kind of short bob and sensible shoes which confirm her status as a serious person with serious thoughts and none of that pesky sex appeal to distract. Only her eye-catching, unnaturally red hair and brightly appealing wardrobe confirm her status as a heroine.

The real flaw she must overcome to retain our sympathies is her contentedly loner status, or so the cinematic wisdom goes. At least director George Miller always has his own unique way of doing things, so thawing Alithea’s perceived frigidity will involve thousands of years of history and eye-popping visuals.

Hints of unearthly forces pepper the film from the beginning, but when Alithea buys a small lamp in a little shop in Turkey while she’s attending a conference, we know things are about to get started. Sure enough, when she ends up fulfilling tradition and giving the lamp a rub back in her motel room, out pops The Djinn (Idris Elba). Once the intellectual aspirations are further confirmed by having the two communicate in Greek (if this wasn’t already somebody’s fetish it will be) before The Djinn magically picks up English, he gets around to offering her three wishes.

Alithea is hesitant to opt in, since as a scholar, she’s well aware of all the numerous stories that involve humans wishing for what they can’t have, and how seldom that desire goes unpunished. Not to mention how many of the granters tend to be tricksters who ensure that humans get the worst of it. To prove his sincerity, The Djinn regales her with his backstory and the humans he has loved, lost, and attempted to aid. Thus begins a lusciously told tale of mythical Middle Eastern and North African adventures, from Biblical to modern.

Those tales, which involve royalty, the enslaved, and repressed wives, are so exquisitely filmed that we might forget why Swinton needs to have a part in it at all. As a character, it’s hard to see what exactly she has to offer besides acting as a medium that allows queens, harems, and even a tiny room full of intellectual and creative repression to unspool before our eyes to dizzying, luscious effect. The Djinn has his own loves too, some of them with the very humans whose wishes he’s granting. But his freedom has eluded him due to the fact that none of them managed to make the three wishes necessary for his release.

His story is related with such reverence for life and creation that a lingering question over whether the story of humanity is ultimately ending casts a glooming note of finality that can only be at odds with the film as a whole, especially since it’s clearly determined to do justice to the short story it’s adapting, A.S. Byatt’s The Djinn in the Nightingale's Eye. Why then did Miller choose to set his version in today’s world rather than the ‘90s, the decade that Byatt wrote and set her story?

It’s more than Miller’s clear disinterest in nostalgia. The ‘90s could easily represent a vanished world that would seem every bit as magical to modern audiences, yet full of unsettling warnings of things to come. Byatt didn’t only bring an enchanting past to vivid life, she gave us ominous portents in her own present – women proudly and conspicuously covering their hair as a rebellion against secularity, and men who outright spoke of the evils of the decadent, dying West and the jihad to come.

When it was published, such developments were little more than theoretical food for thought or amusement at the ignorance of such foolish manifestations of religious fanaticism, since the book’s central heroine and her Muslim friends had no reason to consider their freedoms actual freedoms at all. Who could imagine that their movement would be so constricted when they could casually visit a Turkish market and chat with residents who nonchalantly spoke of their journeys to Iraq, Iran, and Afghanistan to gather and sell their wares?

To view past Middle Eastern and North African civilizations with reverence and loss is one thing, but to depict European and North American societies similarly is another creature entirely. Rather than reflect on that or our own protagonist’s historical introspections, the film would rather substitute development for a new name that is meant to indicate her importance, with Gillian Perholt becoming Alithea.

Instead, the modern, desperate need for connection is taken so much for granted that wondrous creatures such as The Djinn are reduced to mere live-in gigolos who can casually win over elderly bigots by literally providing them the food of his culture as a substitute for thought. This determination to look without rather than within amounts to a central love story that’s as ephemeral and weightless as smoke, but such is the genius of Miller that even smoke is hypnotic, much in the way that Alfonso Cuarón can make the Academy swoon over a puddle of cleaning water in a garage.

The execution may be flawed, problematic even, but seeing Three Thousand Years Of Longing on a big screen is an experience you won’t soon forget. If you see it, might as well see it right.

Follow us here for the latest on all the movies in theaters now!

Am I the Only One Who Found ‘House of the Dragon’ Scenes Abhorrent?