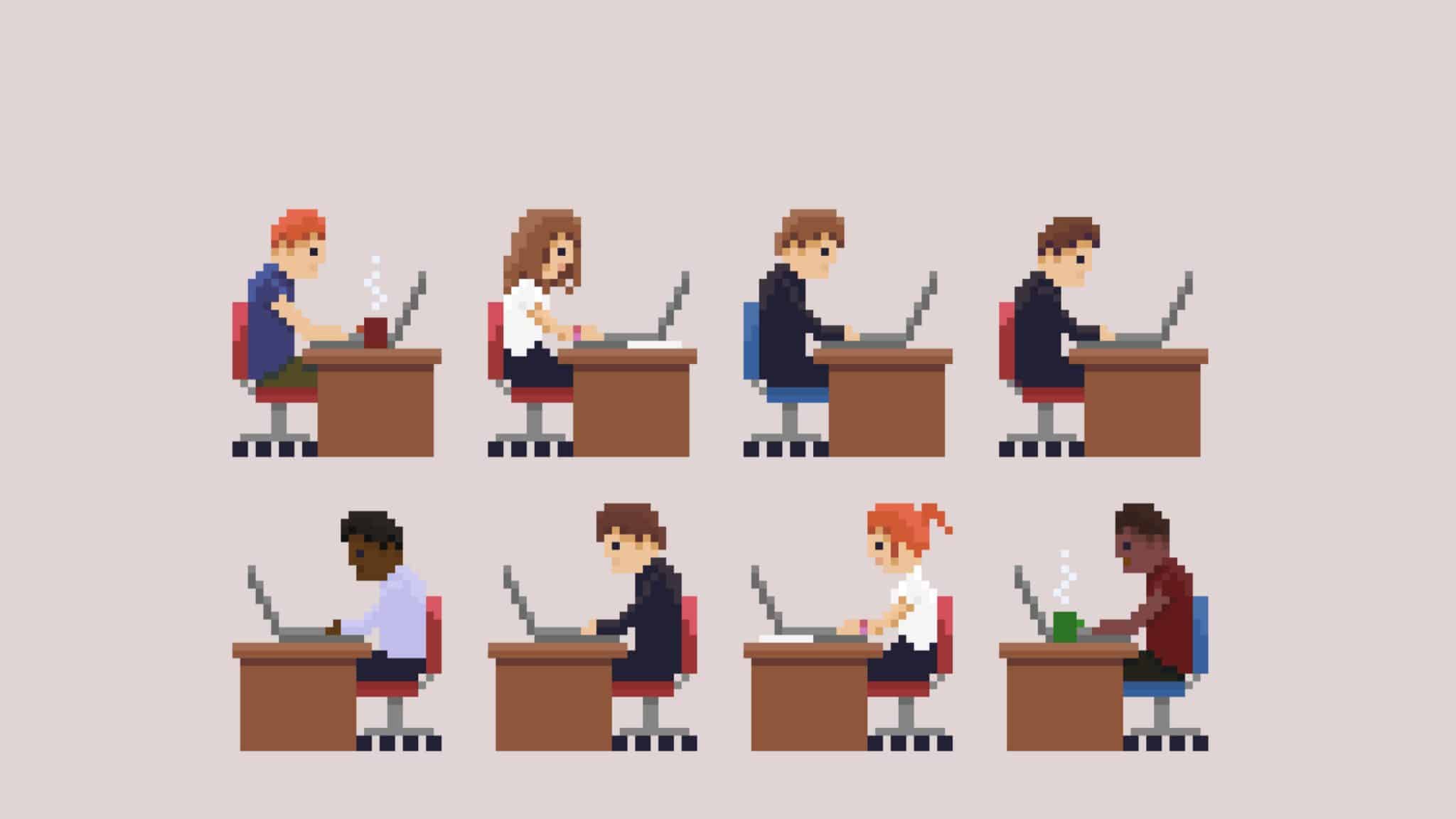 I've never felt like I was the smartest person in the room.

But looking at how I work and what I've accomplished, I think this mindset has helped me achieve more.

It's interesting because it seems like having an inflated view of yourself can work against you. This article is my attempt to process what this means.

I've determined that whether or not I am the smartest person in the room is irrelevant. Even “if” that is the case sometimes, it does me no good thinking this is true.

No one likes to work with someone who thinks they are the creme-de-la-creme.

These types of people not only make it clear how awesome they are, but they make you feel like an idiot when you don't have the knowledge or experience they have.

And the result of this mentality is that we end up creating a hierarchy. We create a system where you have value if you are at the top or near the top. And everyone else is peasants.

If you want to create an efficient team, you want to see the value in everyone. It's not an excuse to accept bad behavior or laziness, but it becomes about motivating everyone to be a part of a cohesive team.

Arrogance does not create an environment where openness, transparency, and honesty are promoted.

If you think you know it all and are the best, you probably will not be motivated to learn continually. What do you have to learn when you already know everything?

Even “if” you are the best, there are always things you can learn. Maybe it is increasing your soft skills, like communication or how you talk to people. And there are most likely ways you can still improve your strengths.

If you get into the habit of not continually learning, you will most likely encounter the following:

The moment we get comfortable, we can quickly miss out on things that can save us time and energy. This will ultimately hurt our careers and put us at a disadvantage.

Arrogance also doesn't tend to want to teach people because they have de-valued their co-workers. It contributes to creating a toxic environment that hurts the team and the company.

Knowing that I can always improve makes me realize that I am not, in fact, “the chosen one.” The only reason I got to where I am is through hard work.

And hard work is going to take me forward continually.

No one is going to give me what I want. I have to earn it. And this is an incredible motivator. Realizing that nothing in life is easy, and if I want something, I have to achieve that goal.

There is also a sense of accomplishment by me achieving something from hard work. It wouldn't feel nearly as good if someone just gave it to me.

It is not too different from backpacking. Part of the joy of getting out into the wilderness is the effort required to get to these remote locations. If I hiked 20 miles, only to get to a road where I see people driving, that would suck the joy out of what I accomplished. But when I arrive at a lake that few people have seen, there is something about that experience that is intangible.

Having this idea that to accomplish and maintain my success, I need to be constantly putting in a high level of effort makes me a valuable member of the team. There is never a point where I've learned “enough” and can stop trying. I always have to be pushing things forward to keep my brain sharp and on top of changes in technology and projects.

If you think you know it all and are focused on appearing like you are the best, you aren't going to be too thrilled about admitting your mistakes.

And we all are humans. No one is perfect.

Even when you realize you've messed up, instead of owning up to your mistake, you will be tempted to blame it on someone else. This not only makes you look like a jerk, but it ends up hurting the team.

Admitting your mistakes isn't about hurting your standing in “who's the best.” It is about improving your team's performance. Your mistakes hurt everyone. And by working on making sure you avoid those same mistakes in the future, you can help other people not do the same things.

No one likes to admit when they make a mistake, but owning up to your part of the problem helps with the recovery.

By ignoring or pretending the mistake didn't happen, it will ultimately hurt you as well.

Reason #5: Masking Hurt/Pain With Over Confidence

I'm learning that most people who are obsessed with appearing like they are the best are people who are hurting on the inside. They are insecure in who they are, and they project that insecurity on others by trying to manipulate how they appear.

And maybe this came from their childhood experiences. Maybe their dad was hypercritical about everything they did, so they learned to always work on how others think about them above everything else. Projecting this super confident, perfect persona makes them feel accepted and appreciated.

I have anxiety issues, which have affected my self-confidence. But I try not to redirect that struggle in a false sense of pride and arrogance. I'm definitely not perfect, and sometimes I fail.

If our behavior is demeaning, insulting, or mean, that's a problem.

Reason #6: Looking Down at Others

The biggest issue I have with overly arrogant people is that they tend to look down on other people.

If you don't match up to their standards, they make you feel inferior. Like your worth is less because you don't know or can't do something.

And I'm afraid that's not right. We are all at different stages in life with different experiences. We also have different strengths and weaknesses.

Our goal should not be to judge where everyone is at. It should be to try to contribute as much to the team as possible and drive things forward. This is what makes the best teams possible.

It would be like me making my child feel bad for asking what I perceive as a dumb question when it comes down to them being young and trying to figure things out. By helping others with their knowledge gaps, we show them that life is less about what you know and more about your ability to learn new things and solving problems.

Being on a team is about tackling problems together and moving things forward. It isn't about seeing who is the best and trying to get to the top.

Take a look at what I've done and give me an honest evaluation — that's what I want.

Some people might not like me, or they might think I'm a weirdo. But what matters the most to me is that I'm a valuable member of the team and a good problem solver. People's opinion of me will change, and there is a part of me that wants to be liked by people. But as far as my job is concerned, it all comes down to my output.

Measure me on my accomplishments and failures. That's what really matters.

These measuring sticks people like to bring out is not measuring anything useful. It's all based on perception, which can easily be manipulated.

I just finished season two of the Mindhunter series on Netflix. I found it interesting that one of the common traits of the serial killers they interviewed was that most of them were incredibly arrogant.

Some of these people thought they were smarter than everyone and couldn't be caught. Or that what they were doing was helping other people.

Of course, all of this was not true, and it is interesting to think about how their inflated ego ended up leading to their capture and imprisonment.

Obviously, this show is looking at extreme examples of arrogance. But I think some people can struggle with some of the same things to a lesser degree. Creating a pedestal for yourself to stand on might temporarily make you feel good, but it will hurt your relationship with people over the long haul.

Mindset Is More Important Than Intelligence.

Obviously, there is a base level of intelligence required to do certain things.

But I think we can depend on “being smart” and “highly intelligent” too much. In most cases, people have gotten to where they are at because of hard work and dedication.

I've tackled complex projects and problems, and I often had no idea what I was doing initially. But it was the act of trying different things and beating my head against the wall for multiple hours that led me to a solution.

In other words, my success only came after a bunch of failures.

If I quit the second I couldn't figure out a problem, I wouldn't be where I am today.

The process of figuring out how to tackle things I don't understand is precious and is one of my strengths. Even today, this is still not a comfortable process for me, and at times I get tempted to give up on problems. But my past results have taught me that as long as I stay focused, I can usually find a solution that will work.

But understanding my strengths does not give me the right to look down on people who don't have the same skills.

Someone who assumes they are the best may not be willing to give the required energy in figuring out a problem. They might think that if a solution doesn't immediately come to mind, it is impossible to solve. And this not only naive, but it can end up making you look bad when someone who is “less intelligent” comes in and figures out the problem through sheer effort and willpower.

To be a valuable member of your team, you have to try to push ego to the side to work as one team together.

Chris is a financial blogger who loves to be transparent about money-related issues. He’s paid off massive amounts of credit card debt and is the blog author of Money Stir. His main focus on Money Stir is talking about how money relates to our relationships, personal development, and how to plan for the future we want. He’s been quoted on Market Watch, The Ladders, and other publications.

25 of the Best Anime on Netflix