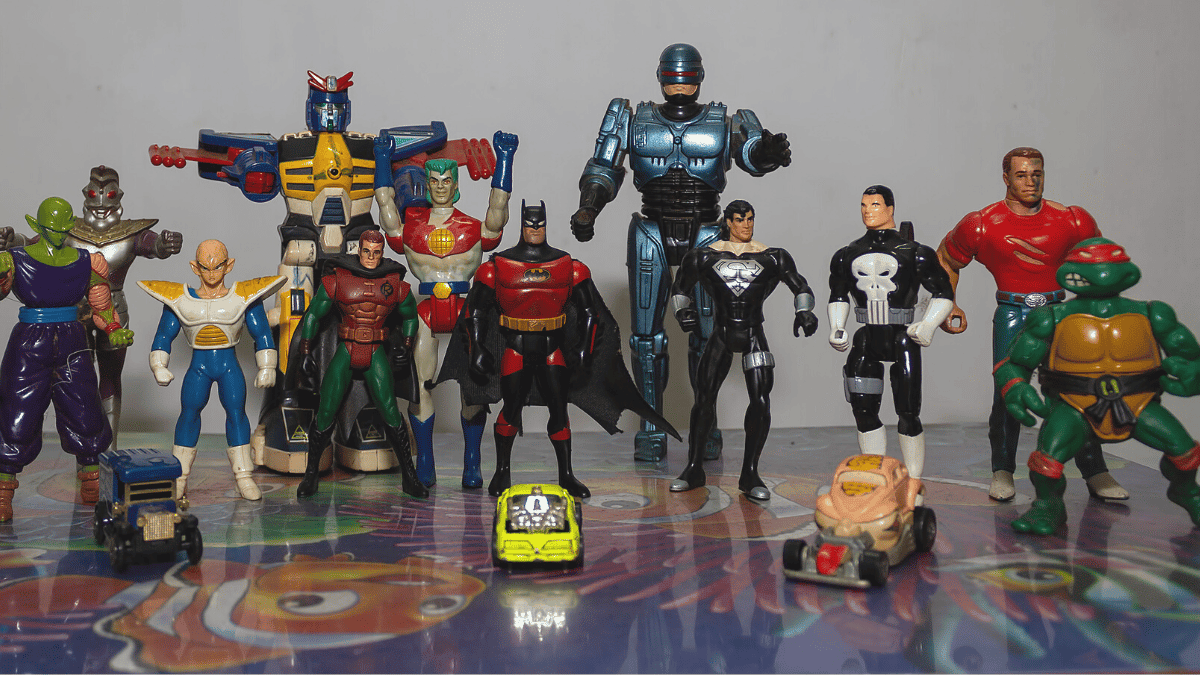 If you were alive in the 80s you likely have fond memories of a simpler time and getting to play with some of best action figure toylines.

The Most Diverse Toys

Children love toys. For the more fortunate children of the world, they're a crucial and memorable part of their childhood for enjoyment and learning. Although the earliest-known written historical mention of a toy dates back to around 500 BCE in Greece, referring to a basic yo-yo (although it's believed yo-yos existed even earlier than that in China), it's arguable that toys peaked in the 1980s.

Action figures were the most fun and diverse toys in the 80s. They came in all shapes and sizes and were the first to completely deviate from the more grounded “Action Man” type figures of previous years.

Put your nostalgia hats on because, in this piece, we'll take you through what we believe are the 12 best action figure toylines from that great decade.

1. Masters of the Universe

Masters of the Universe was superb. The Mattel toys revolved around the conflict between the heroic He-Man (a muscular, magically-empowered, sword-wielding warrior) and the villainous Skeletor (an imposing, skull-faced sorcerer) on the planet Eternia. A Filmation animated series followed in 1983.

This franchise was a hybrid of stereotypical medieval sorcery and sci-fi technology, which made for a very varied array of characters. There were humans, monsters, aliens, robots, mythical beasts, and more. The original toys saw new releases until 1988, which meant there were hundreds to purchase if you wanted the complete set.

The first Star Wars movie hit theaters in 1977, but Kenner made the original toys between 1978 and 1985. As the epic space opera, Star Wars is one of the most popular media franchises in pop culture history, so it's no surprise the toys were a big hit.

Characters from the original trilogy were all made into plastic figure form, including heroes like Luke Skywalker and Han Solo and villains like Darth Vader and Jabba the Hutt. Still, the vehicles were the biggest hits – the AT-AT, AT-ST, and Millennium Falcon were particularly cool and popular.

ThunderCats was influenced by Masters of the Universe, with a sword-wielding protagonist, a magical antagonist, and many other derivative characters, but it was still great. The toys were released in 1985, as was the cartoon. They featured a group of catlike humanoid aliens fighting against the evil Mumm-Ra and his beastly minions on Third-Earth.

The L.J.N. range of toys was relatively small and received limited distribution. Still, the figures were fantastic – with Lion-O and Mumm-Ra memorably having light-up eyes. It lasted for three years, ceasing manufacture in 1988.

Transformers is still a popular franchise today, thanks mainly to the live-action movie series that's been going since 2007 and has six installments. Its popularity peaked in the 1980s when there were cartoons and Hasbro toys based on the franchise, and the toys lasted eight years from 1984.

The franchise is about the Autobots and the Decepticons – warring alien robot factions that can transform into other forms, such as vehicles and animals. That concept lent itself perfectly to making great toys and even though Transformers toys were pre-dated by Go-Bots, made for one of the most creative lines of figures ever seen. Kids played with the likes of Optimus Prime and Megatron for hours on end.

The Real Ghostbusters was an animated spin-off of the 1984 live-action Ghostbusters movie. The franchise spawned a cartoon and a line of Kenner toys – both of which lasted from 1986 until 1991. The toys were a truly color-filled joy.

There was an array of spectral villains to purchase, a variety of ghost-busting vehicles, the four Ghostbusters (along with proton packs and ghosts, and the team's fire station headquarters. The figures and accessories provided everything required for a thorough spook-busting playtime.

Dino-Riders was a brilliant concept. It focused on the battle between the heroic Valorians and the evil Rulon Alliance on prehistoric Earth. The two sides harnessed the power of dinosaurs – the Valorians by befriending them and the Rulons by brainwashing them – and they rode the creatures and equipped them with futuristic weaponry.

The cartoon aired briefly in 1988, but the Tyco toys lasted from 1987 until 1990. They were fantastic and featured various breeds of dinosaurs, characters to ride them, and the weaponry with which to equip them.

Visionaries: Knights of the Magical Light was very short-lived. The cartoon aired in 1987, and the Hasbro toys were released after it ended. They only lasted for one year, but they were very cool regardless.

Set on the planet Prysmos, the franchise's story sees all technology and complex machinery suddenly cease functioning. The citizens then rely on ancient magic to survive. Two opposing factions of knights – the Visionaries and Darkling Lords – receive magical totems on their chests. On the toys, these totems came in the form of a hugely popular 80s fad: holograms.

Throughout the years, Teenage Mutant Ninja Turtles has existed in several media forms, but the original cartoon aired from 1987 until 1996. The original toys, therefore, were released by Playmate Toys in 1997 – and they've never really stopped.

The franchise concept sees four anthropomorphic turtle brothers trained in ninjutsu fighting evil in New York City. The fantastic toys included action figures, vehicles, playsets, and accessories. They were some of the most sought-after and challenging to get hold of in toy history.

The M.A.S.K. cartoon aired from 1985 until 1986, while Kenner produced the toys from 1985 until 1988. They were brilliant and consisted of vehicles with hidden gimmicks designed to represent combat-ready forms and drivers who came with unique masks (generally one or two drivers).

Set in the not-too-distant future, Centurions is a franchise about a team of men wearing exo-frames that allow them to fuse with incredible assault weapon systems. The team battles the cyborg mad scientist Doc Terror who seeks to conquer the Earth and turn humans into robotic servants.

The cartoon aired for the majority of 1986, while the line of toys – which wasn't very extensive but was certainly cool – was released the same year. The action figures were huge by 80s standards, and all came with awesome attachable accessories.

G.I. Joe has been around since the 1960s when Hasbro released a line of 12-inch action figures. However, in 1982, a new line of more miniature 3.75-inch figures hit store shelves worldwide. The 80s concept followed the fight between the military G.I. Joe team and the nefarious Cobra organization.

There was a 1983 cartoon series, a 1987 animated movie, and a 1989 cartoon series to accompany the toys – and the “A Real American Hero” line of toys continued production until 1994. They were wildly varied and great fun with which to play. In addition to the figures, they featured vehicles, playsets, and more.

Of the entries on our list, this is probably the one most people least expected to see. There was no MANTA Force cartoon, just a line of Bluebird toys that began in 1987 and ended in 1991, available almost exclusively in Great Britain. The franchise initially featured two main factions – the heroic MANTA Force and the evil Viper Squad – but other foes later emerged in the form of the robot Karnoids and the swamp-dwelling Stenchoids.

The action figures were tiny, which made the vehicles the best features of these toys – and they were so cool. MANTA Force is one of the most playable lines of toys ever made – and that's not an exaggeration.

All the Resident Evil Movies in Order