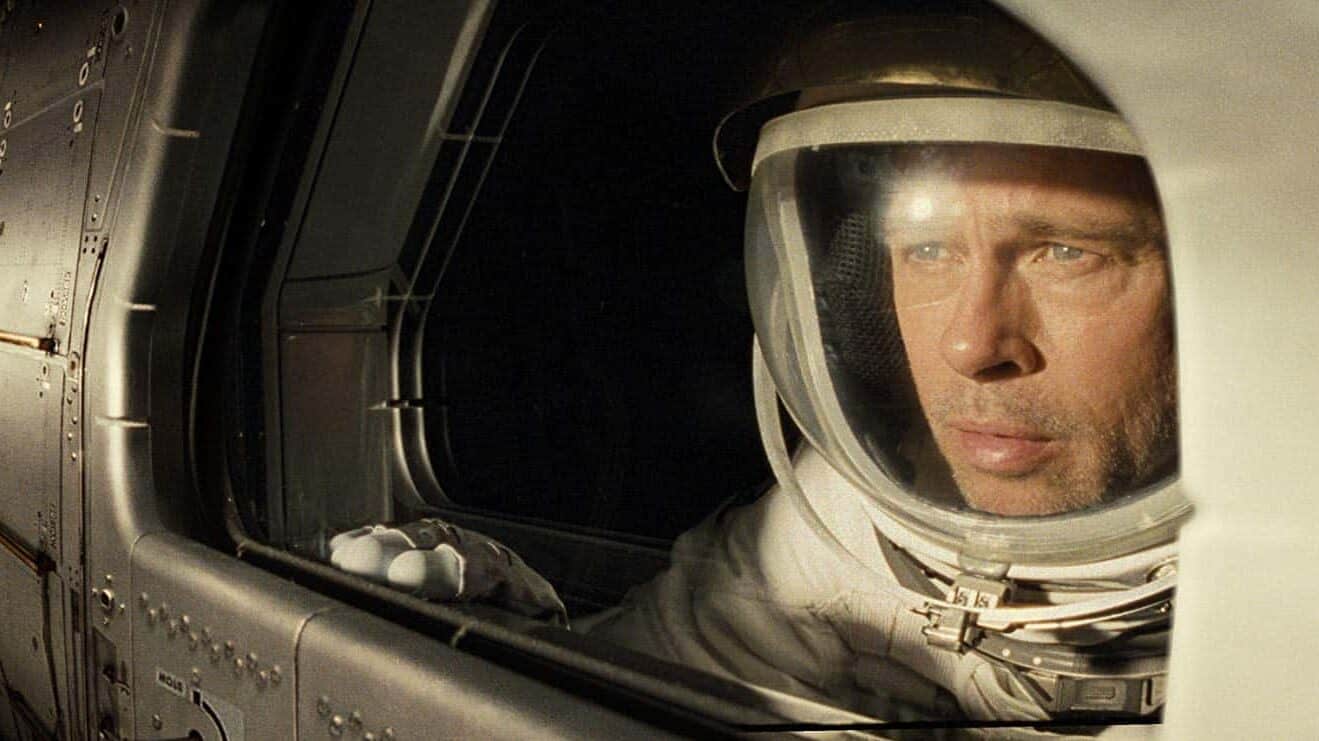 I love the smell of Neptune in the morning!

James Gray is a filmmaker known for intimate human dramas like We Own the Night, Two Lovers, and The Immigrant. After nearly three decades of writing and directing movies in this vein, he finally took a crack at a different genre, science fiction, with Ad Astra.

Not only did he crush a sci-fi venture on his first try, but the movie (whose title is Latin for “to the stars”) also cements Gray as one of Hollywood’s most interesting storytellers of the last 25 years.

Set in the near future where humanity has achieved the ability to travel to the moon, Mars, and beyond, Ad Astra finds our species looking to conquer the next great hurdle: finding intelligent life beyond ourselves in the universe. In an effort to find out, we have built a massive antenna that stretches from the ground into the upper echelons of the atmosphere. An electrical surge at the very start of the plot offers us two things: 1) a breathtaking set-piece to rival Gravity and 2) an introduction to Roy McBride (Brad Pitt), our cool-headed astronaut protagonist who works for Earth’s official “Space Command.”

After here’s nearly killed by a fall from the antenna, Roy is asked by his superiors to undertake a mission to travel to the outermost reaches of space to find his father, Clifford McBride, one of the most accomplished astronauts that ever lived. Tommy Lee Jones plays Clifford in his first major starring role since 2017, and his hauntingly powerful performance that only lasts a handful of minutes will make you realize just how much the 73-year-old actor has been missed these last two years.

Roy’s dad was part of the Lima Project, an expedition that hoped to prove the existence of alien life in the cosmos. The Lima and its crew mysteriously vanished several years ago, but the government begins to suspect that Clifford might be alive when those unexplained electrical surges (originating from Neptune) start wreaking havoc on Earth and killing people. As a result, they commission Roy to head to Mars and send a message to his long-lost father to stop the deadly electrical pulses.

What follows is an epic space odyssey that takes inspiration from (you guessed it!) Francis Ford Coppola’s Apocalypse Now or if you want to strip away all the pomp and circumstance, Joseph Conrad’s Heart of Darkness.

Through the use of heavy voiceover (a la Martin Sheen’s Captain Willard), Roy gives us a window into his mind and personality: he’s estranged from his wife (Liv Tyler in a glorified cameo) for being a distant workaholic, doesn’t necessarily play well with others, and is struggling to live up to his father’s momentous legacy. But does he really want to be like Clifford? That's the big question our hero's journey of self-discovery is out to answer.

Submitted to constant psychological evaluations that every Space Command astronaut must take, McBride Jr. always seems to be on the verge of slipping into the Colonel Kurtz-like madness his father ends up demonstrating after years of isolation among the ghostly blue rings of Neptune. Roy’s inner monologues can get pretty Terrence Malick-y at times, but given the effective Apocalypse Now homage, we can let it slide.

As always, Pitt knocks this one out of the park, playing Roy as shrewd, confident, and introspective. He can hold his own in a zero-gravity fight but isn’t afraid to get philosophical about humankind’s place in the universe, especially when he’s drifting amongst the stars all by his lonesome.

The mostly-airtight tight script written by Gray and Ethan Gross (Fringe) does some pretty fantastic sci-fi world-building, a lot of which comes during Roy’s trip to the moon with Colonel Pruitt (a criminally underused Donald Sutherland). In the future of Ad Astra, traveling to Earth’s one and only natural satellite is no different than taking a commercial flight across the country. The only difference is that a blanket will run you $125 a pop and you can dine at an Applebee’s once you land on the cratered surface. Slowly but surely, humanity has found a way to commercialize outer space, and it’s awesome.

Naturally, the film looks beautiful as Gray was able to secure Hoyte van Hoytema to be his cinematographer, the very same DP who shot Christopher Nolan’s Interstellar. Whether it’s a moon rover chase with space pirates (yes, space pirates) or a divinely Kubrickian shot of another planet (you'd be crazy not to think of 2001 at times), the film milks the beauty and awe of the universe for all it’s worth, painting a world of outlandish possibilities that still feel unattainable. It might as well be a propaganda poster from the Space Age that declares, “Our future awaits in the stars!” or to quote Charles F. Muntz, “Adventure is out there!”

In some ways, Gray prepared himself for Ad Astra with his last feature, 2016’s The Lost City of Z, which was all about an adventure into unknown territory. And while that film didn’t have the same scope as Ad Astra (after all, it was set in the early 20th Century), it did grapple with similar themes of uncovering a great human mystery. Swap outer space with the Amazon jungle and you’ve got a companion piece that looks at our penchant for voraciously seeking existential answers through a different lens. The Lost City of Z unfurls in a time when interstellar travel was limited to the works of Jules Verne and H.G. Wells, but it’s basically a prequel to Ad Astra.

Both movies are interested in what we do when we’ve found all there is to find; what unexplored frontiers we seek out when uncharted territories become multi-colored pins on a map. Ad Astra expands on this idea by using our solar system (and the wider universe) as a jumping-off point for the big questions like “Are we alone in the universe?” And “If we are, were we just some big cosmic fluke?” On Earth, we’re cognizant of our penchant for war and cruelty, but at least we know where we stand on that front. The darkness of our hearts is an unfortunate but known quantity. When faced with the great vacuum of space, however, we’re less sure of ourselves—less confident on where we stand amid the trillions of stars and planets that have yet to be discovered.

The horror of it all, is realizing that no one else is out there, that no one is coming to save us from ourselves. Luckily, Ad Astra doesn’t end on that kind of bleak note. Instead, it posits that if there are no aliens out there, then life on Earth is all the more precious because there’s nothing out there to replace it. As Roy says, “We’re all we’ve got.”