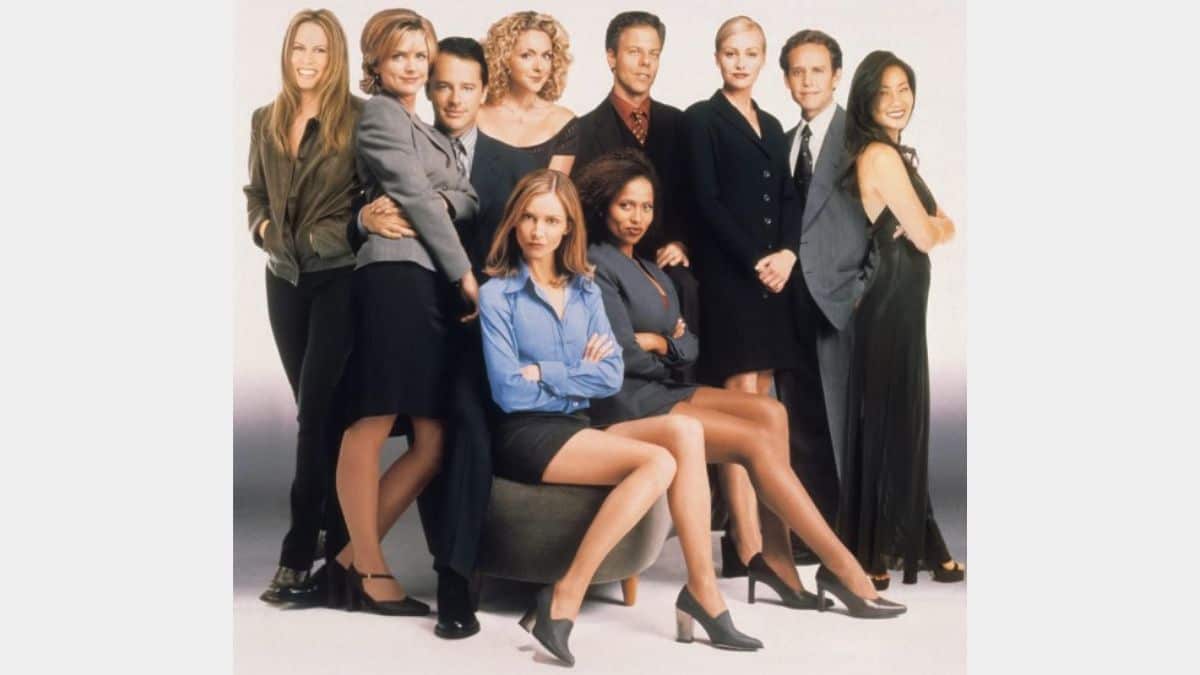 Alright, I lied; season five is garbage because many of the main characters left.

However, the first four seasons are a phenomenal binge demonstrating the worthiness of the 12 Golden Globe and 34 Primetime Emmy Awards the show produced.

It follows an insecure lawyer who joins a prestigious Boston firm, Cage & Fish. She lives a chaotic life and immediately realizes she's working with Billy Thomas (Gil Bellows), who incidentally is her childhood and high-school love. So there is drama from the beginning.

In addition to an all-star lineup of guests, several cast members can carry a tune. Honestly, a few people from the cast could sell records tomorrow with the talent demonstrated on the show.

And a couple should just stick to being lawyers. Guest singers, including Barry Manilow and Gloria Gaynor, also pop up in Ally's hallucinations now and then.

Okay, the only good thing about season five is Jon Bon Jovi and Taye Diggs, who both sing. Alright, Regina Hall as Coretta Lipp and Christina Ricci as Liza Bump aren't terrible, but the show without Larry Paul destroyed its viewership.

Watch Ally McBeal streaming on Hulu if you missed these celebrities' first performances.

Anne Heche played Melanie West and John Cage (Peter MacNicol)'s love interest in season four of Ally McBeal. Although to be fair, she picks up a guitar, not a mic. However, she carried a tune in “Mr. Bo.”

Sadly, we need to take a moment of silence. Anne Heche died on August 12th, 2022, after being taken off life support. She had been hospitalized following an incident where she drove her car into a building with narcotics in her system.

The legendary Tony Stark / Iron Man (Robert Downey Jr.) was iconic as Larry Paul in Ally Mc Beal. So much so that the show fell apart without him. Other cast members left but losing Larry Paul after seeing Ally finally so happy destroyed us.

Robert Downey Jr. is a fantastic singer who recorded songs for the Ally McBeal soundtracks. RDJ is also in Sherlock Holmes and its sequel, among many other films.

Vonda Shepard was the resident performer at the bar where the lawyers from Fish & Cage went to drink, dance, and talk trash after work. She co-wrote and sang the theme song, “Searchin' My Soul.”

Additionally, there are five Ally McBeal soundtracks full of her hit songs. Her rendition of “(Everybody's Waitin' for) The Man with the Bag” is a popular holiday tune that resurfaces annually.

She starred in several films, including Two Weeks Notice (2002) and 88 Minutes (2007). In addition, Alicia Witt has been on TV shows such as Nashville, Orange is the New Black and Twin Peaks.

Ally had Al Green hallucinations in two episodes, and he can definitely sing. He's best known for hits like “Let's Stay Together” and “Tired of Being Alone.”

Green is a fantastic performer and singer-songwriter with 11 Grammy awards. So if you have an opportunity to see him live, it's an incredible, high-energy experience.

Lisa Nicole Carson should always walk around with a microphone in her hands. She's sensational as a singer and performer. Carson played lawyer Renee Raddick and Ally's best friend and roommate in Ally McBeal.

The one and only Barry White had guest appearances in two episodes. However, his music was recurring. His hit, “You're My First, My Last, My Everything,” was John Cage's theme song to get hype for trials.

It's one of the “Funny little man's” many quirks. When Nelle and Cage were dating, she surprised him with a Barry White performance at the bar. Again, he shows up in Ally McBeal‘s finale.


Jennifer Holliday is a phenomenal singer with an out-of-this-world power and range. She has gospel influences and played the gospel choir leader (Lisa) at a church frequented in Ally McBeal.

Holliday starred in the musical Dreamgirls (1982-83). She's best known for her Grammy Award-winning debut single, “And I Am Telling You I'm Not Going.”

In Boy Meets World, William Russell plays Alan Matthews (dad). He also played Michael Bassett in “Two's a Crowds” and “Without a Net” in Ally McBeal.

He's the piano playing, Neil Diamond singing father in the father-son duo that Ally dates in a mishap. He's been all over television in shows, including Girl Meets World, 9-1-1, and Animal Kingdom.

Legendary rock icon Tina Turner's guest appearance on Ally McBeal is in “The Oddball Parade.” She hosts a contest, and the winner will have the honor of being a backup singer in her performance at the bar.

Naturally, Ally wins. Turner's hits include “What's Love Got to Do with It,” “The Best,” and “Proud Mary.” Additionally, her documentary Tina is an incredible watch on HBO Max.

In “Cloudy Skies, Chance of Parade,” Sting is being sued by a husband who accuses him of wooing his wife at a performance. It's one of the sillier Ally McBeal episodes. Still, it resulted in an incredible performance with Robert Downey Jr.

Sting was the frontman, songwriter, and bassist for The Police. He also went solo successfully and added acting to his resume.

Jane Krakowski is a remarkable singer and performer. Before she was on Jenna Maroney on 30 Rock, she played Elaine Vassal in Ally McBeal. Krakowski was the flirty office assistant who invented the “Face Bra.”

She also plays Jacqueline White in Unbreakable Kimmy Schmidt. In addition, Jane Krakowski is a Tony Award-winning actress who regularly performs on Broadway.

Josh Groban played Malcolm Wyatt in two episodes of Ally McBeal. He was an outcast teen who sued a girl for backing out of their prom date. Fortunately, consent won, and Malcolm lost the case.

However, he shows her what she was missing when he performs at prom and blows the roof off. Josh Groban's performance caused 8000 viewers to write emails. Furthermore, it helped launch his career.

Our favorite lawyer Ally McBeal (Calista Flockhart), is an eccentrically idealistic lawyer best known for her neurotic behavior and wild fantasy life. While not a regular cast singer, she grabbed the mic several times.

Her most notorious song choice was likely her “Santa Baby” performance at the bar. Calista Flockhart has also played in Brothers & Sisters and as Cat Grant in the first season of the superhero show Supergirl.

Before he was Captain Joe West on the TV series, The Flash, Jesse L. Martin played Greg Butters on Ally McBeal. He was a serious love interest for Ally and a fan favorite. In addition, Martin is an incredible singer with a sultry voice.

Anastacia is best known for international hits, including “I'm Outta Love,” “Paid My Dues,” and “One Day In Your Life.” In addition, she sang at the bar in two Ally McBeal episodes with Vonda Shepard.

Anastacia has been a guest judge for shows, including The X Factor and The Voice. Furthermore, she won as the Vampire in Australia's version of The Masked Singer.

“The Biscuit” and funny little man John Cage was one of the show's quirkiest, lovable characters. He dated Nelle Porter (Portia de Rossi) and was in love with Ally. Although, she didn't reciprocate his feelings.

He finally got on stage with Renee on her birthday and sang “Till There Was You.” While not a lead singer, John Cage can carry a tune, and Renee always makes songs great.

Loretta Devine was Lorrell Robinson in the original Broadway production of Dreamgirls. She also played Gloria Matthews in the film Waiting to Exhale and Adele Webber on Grey's Anatomy.

Divine won a Primetime Emmy Award for the latter. In addition, she played Nora Mills in the episode “I Will Survive” on Ally McBeal, and Ally hallucinates her singing on the stand. She's a phenomenal performer in this quirky series.

James Marsden played Glenn Foy in Ally McBeal, and his performances on the show opened him up for roles, including The Notebook (2004). In addition, he's well known for playing Cyclops in the X-Men (2000) franchise.

Marsden is a fantastic singer, and that smile, my gosh. In addition, he's in television shows, including Westworld and the Netflix black comedy television series Dead to Me.

Before playing Lyndsey McElroy on Two and a Half Men, Courtney Thorne-Smith was Georgia Thomas on Ally McBeal. She married and divorced Ally's childhood sweetheart, Billy Thomas (Gil Bellows).

She's also known for starring on Melrose Place and According to Jim. Conversely, she's not known for her singing, and we hope she was intentionally making things worse in her Ally McBeal performance.

Greg Germann played Richard Fish, a partner in the prestigious law firm Cage & Fish that ultimately became Cage, Fish & McBeal. Between his “fishisms” and love for “wattle,” he found time to rehearse a song for his girlfriend and judge, Whipper Cone ( Dyan Cannon).

Greg Germann had a recurring role on Grey's Anatomy as Dr. Tom Koracickand and is known for roles in Ned & Stacey and Once Upon a Time.

Lucy Liu played Ling Woo, the fierce, asexual lawyer who loves to sue people. Once, she sang at the bar using Elaine's voice.

Ling also performs “Hey Paula” to an apparent recording with Richard Fish. So we never hear her honestly sing, but she's a hell of a performer.

Lucy Liu was terrific on the television series Elementary and Why Women Kill. She's also known for her role as Alex in Charlie's Angels and her voicework in the Kung Fu Panda and Tinkerbell franchises.

How To Deal With a Volatile Stock Market: 5 Simple Tips