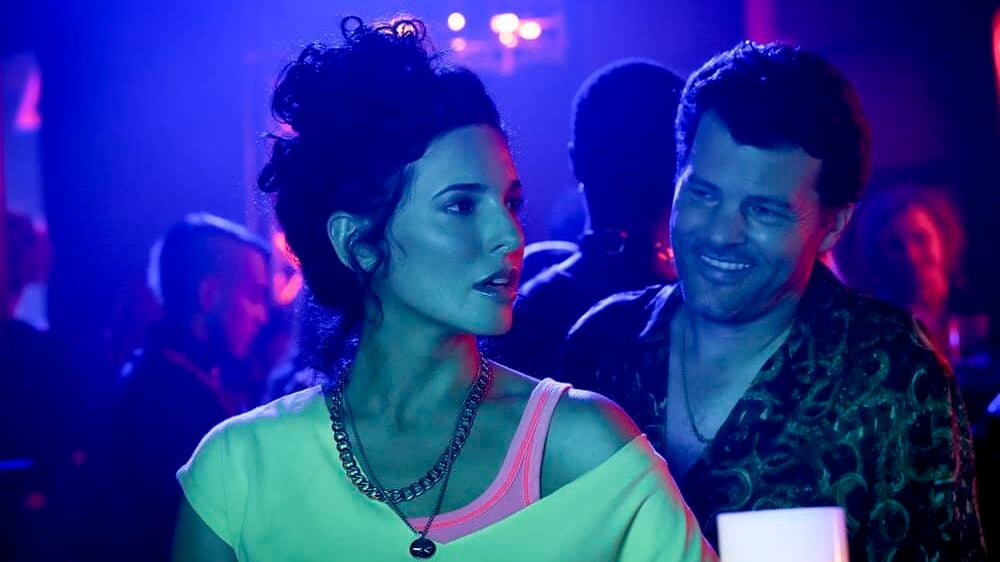 Fans of the 80s sci-fi-meets-historical thriller series Quantum Leap are excitedly eating up NBC’s 2022 revival of the show as episodes air each week. NBC recently ordered 9 more episodes of the show, reflecting its status as the most-watched network debut this year. As Dr. Ben Song (Raymond Lee) travels through space, time, and other people’s bodies, he uses his incredible power to alter devastating events from the past to shape the future.

Dr. Song inhabits many bodies throughout his mission, One of which is Eva Sandoval (Anastasia Antonia). She’s a determined female bounty hunter in the 1980s, working on an important case when Dr. Song takes over her body to change the course of history.

At Wealth of Geeks, we had the chance to talk with Anastasia Antonia, the talented actor who plays Eva in the fourth episode of the Quantum Leap continuation. She told us about her life-long passion for entertainment, her start in the modeling industry, and her experience portraying both Eva herself and Dr. Ben Song inside Eva’s body.

Maya Capasso: How did you get into the entertainment business? You began as a model, which shifted into an acting career. Can you talk about that experience?

Anastasia Antonia: It started when I was a kid with theater performances in the summertime. I loved acting, and I loved the transformation; I loved being on stage. It was my little private goal.

Ford Models scouted me right out of high school. I was really excited about that opportunity because I saw it as a way to parlay into acting. I let my agents know that I was interested in acting roles, and I actually booked the very first audition that they sent me on, which was for the movie The Promotion (2008). I got to act across from John C. Reilly, who I’m a huge fan of. I worked with Sean William Scott, Fred Armisen, and Jenna Fischer; it was a magical experience. I was very lucky.

I then jumped to New York and did some more modeling out there. It happened because I was given the opportunity to be out there during fashion week. I had a designer that really wanted me to be the face of her brand. I went out there for a while, but the goal was always to come to LA and focus on continuing my acting career. So I did!

MC: Was being a model and an actor always your dream? When did you know it was the right path for you?

AA: My first love as a small child was piano. I grew up with a ton of instruments in the house. I come from a family of musicians and artists. As soon as I could write, I was really into writing poetry and stories. I wasn’t really introduced to acting until, I would say, maybe eleven or twelve years old. I had a cousin that was doing theater, and I went to go check it out. They invited me to go and be a part of the auditioning process in the play. As soon as I performed in my first play, I was like, “oh, this is what I want to do. This is it.”

I can recall with great clarity sitting on the theater steps and thinking, “Everything feels right. This is what I want to do for the rest of my life.” But I didn’t want to tell anyone because I didn’t want anyone to take away from that dream in any kind of capacity. So I just kept it to myself and focused on that.

MC: How did you cope with negative comments from others who claimed that acting isn’t a real career or something you should pursue?

AA: I didn’t talk about it until I was pursuing it. I bypassed it all and was like, “well, I’m doing it.” I remember telling my parents because it was like, college or this, and I said, “just give me a year. Just give me a year to try this out.” And within that year, I was blessed enough to find success. So my parents were like, “okay, fine.”

MC: How did you find out about the revival of Quantum Leap?

AA: I didn’t find out about it until my agent sent me the audition. And it was boom boom boom from there. I auditioned for it, and the booking process was very quick.

MC: Were you a fan of the original Quantum Leap show from the late eighties? If so, what was your favorite thing about the show?

AA: It was actually before my time. What I did get to do once I got the audition was go check out the original, and I would say I’m becoming a fan of this old series. It just has so much charisma and so many crazy scenarios. It’s like in society when we’re always reading these stories of things that happened, you kind of put yourself in there like, “what would I do, or how could I have circumvented the circumstances,” especially in some of the more horrible stories from the past. I think it’s amazing to watch someone scratch that itch of going in there, taking charge of the situation, and correcting past mistakes.

MC: Can you talk a bit about your character, Eva Sandoval, and what it was like to portray a female bounty hunter in the eighties?

AA: It was so much fun. I mean, first of all, the 80s and 90s were when so much stuff was very real around here, y’know? So it was a tough time to be a part of. And a bounty hunter, I mean, any kind of tough female lead is a joy for me to play. You get to exercise that part of you as a woman. It was a joy. She’s tough and career-oriented, which I am too. She’s somebody who places a lot of emphasis on family, and I can relate to that. She’s somebody who is a justice seeker. That’s another thing I can relate to. So she was kind of an easy character to get into. I’d say when I was younger, I was very ruthless about career coming before any sort of social aspect of my life. Overall, playing Eva — it was a lot of fun.

MC: You play two roles in the show: one as Eva herself and the other as Dr. Ben Song inside Eva’s body. Can you tell me what that was like for you?

AA: It was really fun. First of all, when I got to the set, Raymond Lee was super accommodating. He’s very nurturing as an actor. He’s generous and giving. He walked me through what he did, how he felt, and his take on the character. So I got to bring in his perspective. It was interesting. Because, to some degree, I got to jump into his mind. What would it be like to be Raymond Lee if he were inside my body?

At the same time, it was actually freeing, even though it sounds even more confining. Now I’m a character inside a character. But I just got it immediately. And it probably was because of Raymond. Having empathy for what he was going through and his approach, I was like, “yeah, I got this.” With Eva Sandoval, I get it. She’s a lot like me. There’s a lot of me in that role. And then, to imagine being a man in my body was actually quite an easy switch.

MC: What do you hope viewers will take away from Quantum Leap?

AA: I hope it inspires viewers’ creativity and imagination because it is such a ride. And also to keep seeking. Seeking different ways of seeing the world. Seeking ways of understanding different walks of life; through the eyes of different people. Because I think that is such an important part of Quantum Leap: The experience of actually being in another person’s shoes. I would hope that it inspires our audience and excites them with their imagination and with what possibilities in the near distant future could be.

MC: What do you hope viewers take away from your performance as Eva Sandoval in the series?

AA: I hope it inspires vulnerability and love.

Quantum Leap airs Mondays at 10 pm on NBC and streams the following day on Peacock.