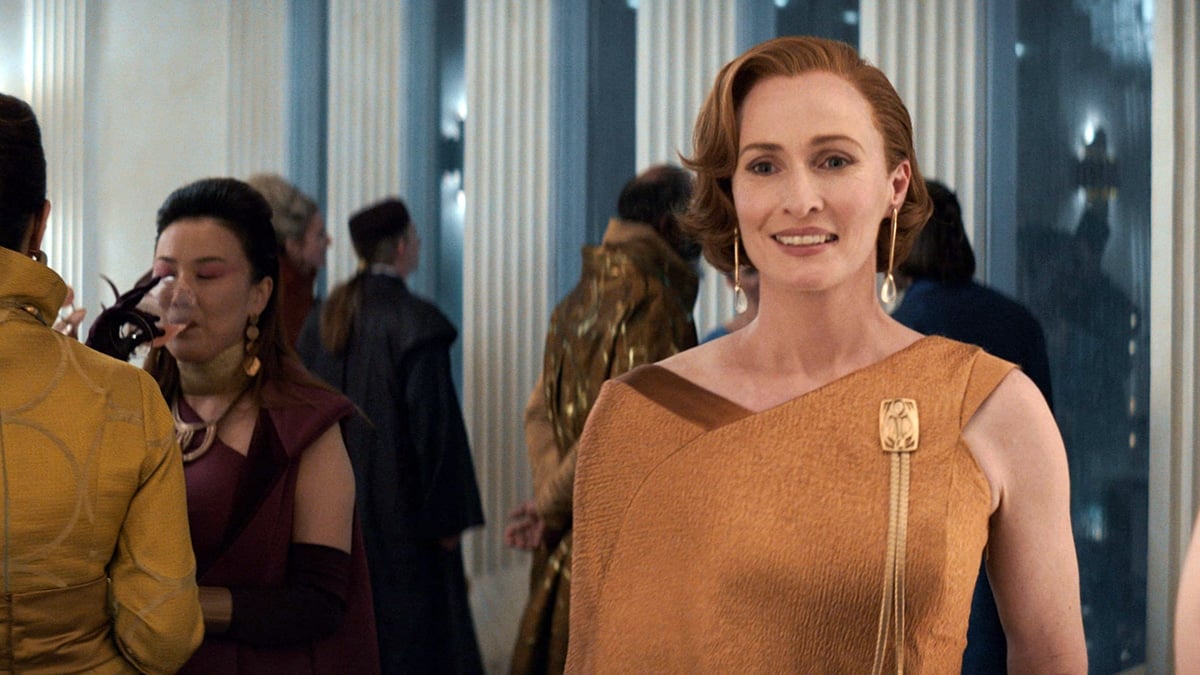 Warning: Spoilers for Andor Episode 4 Ahead.

After an epic start to the series with three fantastic episodes, Andor continues Cassian’s journey in episode four as he joins up with a team for his first actions as part of the Rebellion. While he is certainly a big part of this episode, fans will also get to see another fan-favorite step into the limelight.

That’s right, Mon Mothma (Genevieve O'Reilly) is officially back in Andor episode four, and she is a force to be reckoned with.

The episode starts off with Luthen Rael (Stellan Skarsgård) and Cassian Andor (Diego Luna) in the ship they got off-world with in the last episode. Rael is explaining to Andor what he needs him for – they are going to steal the quarterly payroll for the Imperial Guards in order to help fund the Rebellion. Andor is willing to help and comes up with the name Clem as an alias.

Rael introduces “Clem” to the leader of this team and lets her know that including him in the plan is a requirement. She knows the rest of the rebels will not be thrilled with a newcomer coming on too late, but she tells Clem to say this was always the plan and they will put up less of a fight. She is exactly right, as most of the team argues with her upon their arrival at camp, but eventually give in as they know they need all the help they can get.

The plan is to break in under the cover of what the locals call a meteor shower, which means they have a very small window. Andor / Clem is given a lot of things to study so that he can fit right in. It is assumed the next episode will feature the actual mission, which is exciting for fans because this episode really did not have any action – at least nothing like the first three episodes. Still, it helped move the story forward which is important with something like this.

Meanwhile, Back on Coruscant

Like we said, this episode doesn’t just focus on Cassian. In fact, it spends quite a bit of time with Mon Mothma. We are introduced to her again when she visits an undercover Luthen Rael under the guise that she is buying a gift for her husband. She is a Senator but is being followed by security wherever she goes, since the Empire does not trust… well… anyone. This causes the two to speak in riddles until they can find a spot to speak freely out back, while Rael’s “assistant” distracts the security detail.

She requests to bring someone else on, which is a fun parallel to the fact that Rael just did the very same thing with his team and Andor. While Rael is skeptical, he tells Mon Mothma that he trusts her judgment, and she is very appreciative of this.

When she returns home, she learns that her husband has invited several people over for a dinner party. These are people that try to block her moves at every turn, so she is, understandably, not thrilled about it. Seeing this side of Mon Mothma’s journey is interesting, and we cannot wait to watch it all play out.

Overall, this episode is a nice change of pace from the first three episodes. That isn’t to say there is anything wrong with them because there isn’t. However, it is nice to travel to another planet or two and move Cassian further down the path to becoming the Rebel hero we all know him to be. It was also wonderful to see Mon Mothma again and learn a little bit more of where she is coming from as well.

We also get to see inside the Imperial Security Bureau, kind of the Star Wars version of the Komitet Gosudarstvennoy Bezopasnosti (KGB).

If Andor continues to be as interesting and exciting a show as the first few episodes have let on, Star Wars fans are in for a treat!

The fourth episode of Andor season one is now streaming on Disney+, with a new release every Wednesday until the season one finale, episode twelve, on November 23rd.

Get Paid for Your Data With These 14 Data Collection Apps