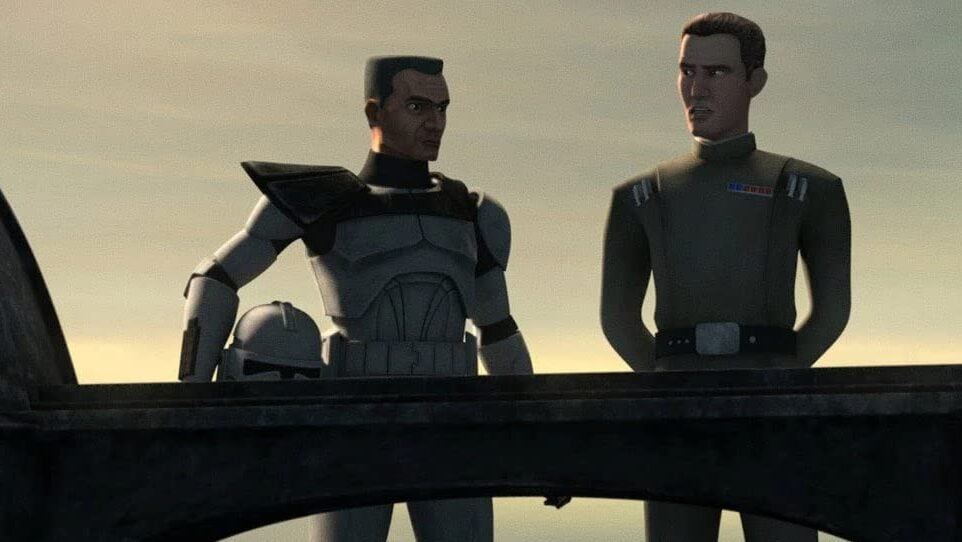 The premiere episode of Star Wars: The Bad Batch season 2 left off with the clones in quite a dangerous predicament. However, Dave Filoni and co. were not going to force fans to sit on that cliffhanger for too long. The second episode of the season was released to Disney+ the same day as the first, and thankfully it picks up exactly where episode 1 left off.

As you might recall, Omega, Echo, and Tech were last seen hurtling towards the ground in a cargo crate at intense speed. Of course the plan was never to kill off three of the main characters at the start of season 2 so they land safely in the Serrano mountains thanks to some extremal thrusters. Unfortunately for Tech, it isn’t that soft a landing and he ends up with an injury, but we are sure he will heal quickly.

Meanwhile Hunter and Wrecker continue to fight off Stormtroopers and are able to take cover in city ruins that are close to Dooku's palace. Captain Wilko leads stormtroopers in an effort to find them, and calls in air support so they can track them down.

Stubborn Omega Won’t Give Up The Prize

Omega, Tech, and Echo meet an old man named Romar as they are looking for Hunter and Wrecker after escaping the cargo crate. They learn all about him and how Dooku helped to ruin his life. Omega still wants to work on the mission, against the wishes of the other clones, and she uses one of Romar’s repelling cables to get to the crate containing the war chest.

Echo decides to follow her but is almost immediately descended upon by Stormtroopers that were sent to inspect the crash site. Since Tech is injured, he arrives to work as a distraction – and keep the troopers busy – while Echo goes after Omega.

When he finds her, he attempts to help her with the crate but it spills and jewels tumble out of reach. Echo practically begs Omega to leave them be, but she refuses. She just will not accept that their mission is a failure. She tells him that she overheard Echo and Hunter talking, and that Echo was saying the only reason they are on the run is because of her. She wants to earn her spot with the team, and help them gain a reward that will allow them to finally be free from all of that.

Romar To The Rescue

Back at the top of the cliff, Romar throws a rope to Omega and Echo so that they can climb back up. Troopers are still attacking but Tech eventually stops the majority of them, allowing them the time to help Omega and Echo to safety.

Wrecker and Hunter arrive with their ship. The Bad Batch says their goodbyes and thanks to Romar and leaves Serrano. Omega apologizes to Echo for losing the war chest to which he tells her that he would make the same choice to rescue her over and over again, given the chance.

The end of Star Wars: The Bad Batch season 2 episode 2 shows Vice Admiral Rampart arriving on Serrano. When Wilco tells him that Clone Force 99 was there, and discusses everything that happens, Rampart says that he must be mistaken, because they are all dead.

Wilco doesn’t take the hint and puts his foot down that he knows what he saw. Rampart explains that he needs the reports to have no mention of Clone Force 99 and when Wilco refuses to falsify documents Rampart kills him.

It is easy to see why this episode was released along with the first one of the season as they tell a cohesive story together. Thankfully fans did not have to wait long for the events on Serrano to be resolved, and they were done so in a way that was full of action and even included some emotional moments.

With the way this episode ended, we are not sure where things are going but one thing is for sure, they are very exciting. Rampart isn’t messing around and will surely be coming after Clone Force 99 sooner than later.

New episodes of Star Wars: The Bad Batch drop every Thursday on Disney+.

Coachella 2023 Has Some Surprising Artists Performing