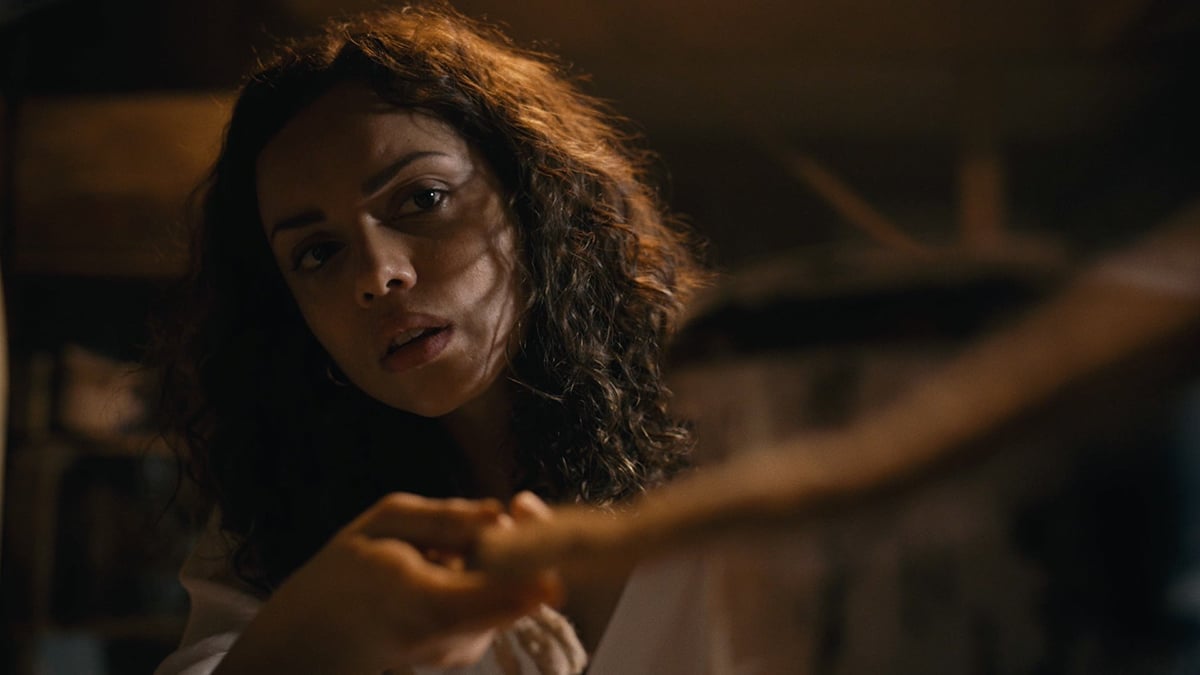 Barbarian is one of those movies that will leave viewers with their jaws on the floor wondering what the heck they just witnessed. Packed with unexpected twists and turns this thriller is truly shocking. The audience might think they have it all figured out but trust us, they won’t know what hit them.

This movie is a truly wild ride that thriller/horror fans will be ecstatic to go on.

The movie starts off with a double-booked Airbnb rental. A young woman named Tess (Georgina Campbell) shows up on a rainy night to a home she rented only to find out that another person, Keith (Bill Skarsgård) is already staying there. When the rental agency doesn’t answer, and since all the local hotels are booked, they are forced to stay together for the night.

And here is where we refuse to give away any more of the plot. Why? Because this is one of those movies that viewers should go into as blind as possible. You might think you know what is going on but trust us, you don’t. That is what works so well about Barbarian. This film deserves to be seen on the big screen, with a packed audience. It is one that is worthy of staring at your fellow moviegoers with bewildered looks on your faces as you try to process what is going on in front of you. This movie is bonkers in the best way possible.

Perceptions Can Be Deceiving

The main thing to know about Barbarian is that it takes a lot to process it. This movie is going to stick with viewers long after the credits finish rolling.

Writer/Director Zach Cregger explained his inspiration at an LA screening, stating that there are many subtle things a man can do when in the presence of a young woman that will rub them the wrong way. That isn’t what the whole movie is about, but that inspiration can certainly be seen – and even felt – by everyone in the audience.

This movie is unafraid to tackle the nature of human beings, and the many types of monsters that are out there. Some scenes are particularly hard to watch, and we aren’t talking about the ones with blood and gore (although those ones do get a bit intense). It is the ease with which some people can be truly horrific, that is going to hit a lot of people in the gut.

In true thriller fashion, there are intense and quiet moments interrupted with some of the most terrifying jump scares. The score and cinematography work together extremely well, making this one of the most effective horror movies in a long time.

Cregger was clearly influenced by one of the best horror directors in the business, Sam Raimi. However, the similar style does not feel like an imitation at all. This is important when taking inspiration from someone that you most certainly do not want to have to be compared to. Raimi is brilliant at what he does, but Cregger has a long future in movie making too if he keeps this up.

This movie is horror at its finest. There are twists and turns that no one will see coming, intense action and chase sequences, and an underlying message that is more terrifying than you can imagine. Because it shines a focused light on things that happen in real life. Many viewers will be unsure what they think about Barbarian when it ends. But it is the way it will stay in your head for days, weeks, months, that is what makes it so scary and powerful.

This is sure to be one of the most talked about films of the year – perhaps even longer.

Barbarian arrives in theaters, Friday, September 9th. Here's the latest on all the films now in theaters.

Leasing vs. Buying a Car: Which Is Smarter?