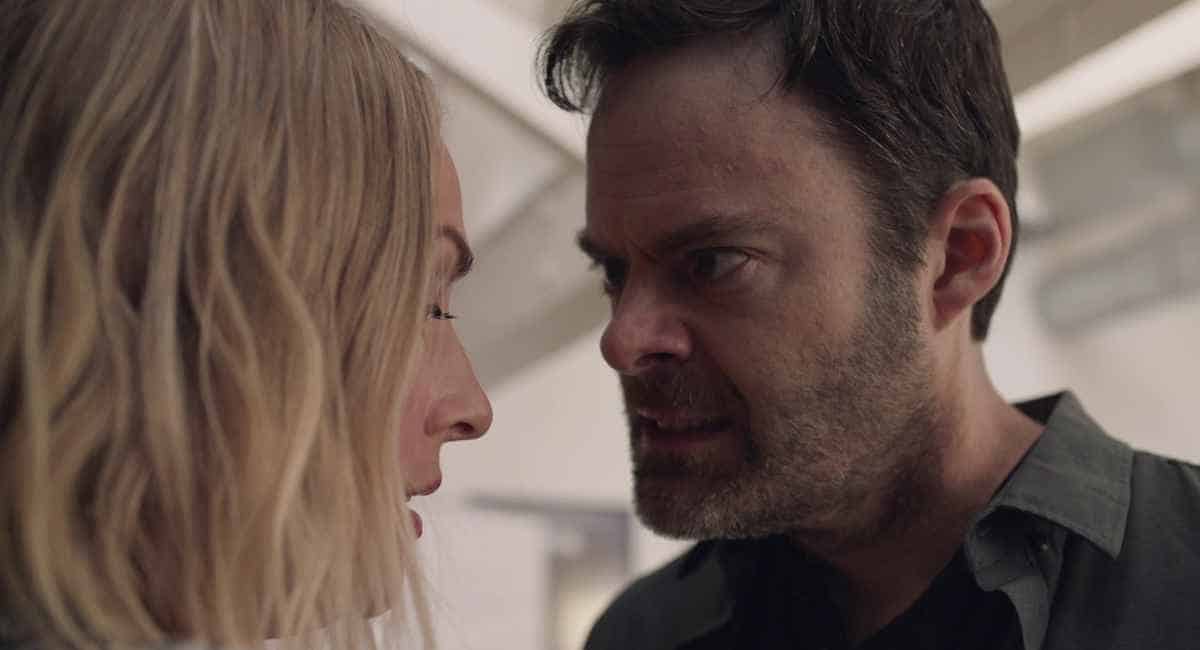 In last week’s season premiere of Barry, we saw the HBO series enter perhaps its darkest phase yet, with Bill Hader’s title character indiscriminately murdering several people without any regret, hesitation, or moral conflict. His acting career stalled and his professional life crumbling around him, he’s returned to contract killing, dividing his time between murdering and coach-loafing. While he struggles to find direction in his life, Gene tries to kill him, only for Barry to turn the tables on his old acting teacher, nearly murdering him before Barry “has an idea,” perhaps saving Gene’s life — the main focus of the season’s second episode, “Limonada.”

In the opening moments of “Limonada,” Barry’s idea to save Gene is revealed: he plans on getting Gene an acting gig on Sally’s show, reviving Gene’s own failing career. When he brings the idea up to Sally at her show’s offices, Sally reveals to him that she had already tried securing Gene a role, but that his poor reputation in Hollywood and eccentric personality has pretty much blacklisted him from every major television studio in town. Frustrated, Barry breaks down in anger in front of Sally and her employees, backing her into a wall and screaming at her that they need to do more for Gene — something that Barry “needs” to do in order “to live.”

Driving around town trying to find Gene's work, Barry stumbles onto an audition in a police procedural series, securing a role for himself while also negotiating that Gene appears as a background extra in the episode. Elated, he unlocks the trunk that Gene has been locked in for the past day, only to find that Gene has escaped into the nearby suburbs. Giving chase, Barry eventually meets Gene back at his son’s house, silently threatening Gene’s family in order to keep him quiet, and informing Gene about the duo’s role in the police series.

Meanwhile, Hank’s lover and former rival, Cristobal, is shocked to find that his father-in-law, Fernando (Miguel Sandoval), has arrived in town, bringing with him a huge group of elite Bolivian mob members to eliminate Hank and permanently purge the Chechens from Los Angeles. Conflicted over where his loyalties lie, Cristobal privately advises Hank to run for his life, saving him and his men from an organized mass hit from the Bolivians, and essentially breaking up with Hank as a result.

For such a somber and often times incredibly serious episode, “Limonada” seems like a return to form for Barry, balancing its bleak atmosphere with the series’ signature blend of light-hearted and dark humor — something that was noticeably missing in the practically humorless season premiere, “forgiving jeff.”

One of the strongest and most unique traits Barry has is its ability to inject almost SNL-levels of comedy into its otherwise serious plotline, and in “Limonada,” we see that trait reintroduced, coming into play several times throughout the episode, undercutting the tensity of one scene and allowing for a small laugh when you least expect it.

Particularly noticeable examples of this can be found when Cristobal breaks up with Hank — the camera lingering on Hank’s heartbroken face for a comically long stretch of time as we hear Cristobal loudly walking away, getting into his car, starting it up, and listening to a blaring sports radio broadcast as he drives away (something that seems like a gag straight out of Family Guy or The Simpsons). Or later, there’s the hilariously unexpected scene during Gene’s escape from Barry. As he races through suburban backyards, we see two women in the midst of their own breakup inside a house, with the main cause of their romantic issues stemming from the fact that one partner has too many dogs (in the background, we see Gene being mauled by at least 20 different dogs, a highly original parody of the classic “rottweiler in the backyard” cliche we’ve seen in dozens of movies and TV shows prior).

While descriptions of such scenes may seem a tad ridiculous at first, clashing with the overall seriousness of the episode, the series’ humor remains arguably the strongest feature of Barry — the comedic moments making the drama that much more sobering, giving viewers a much-needed bit of relief from all that intensity.

However, for all the comic elements you can find in “Limonada,” the episode still contains some poignant or emotional moments as well, harking back to the downbeat tone of “forgiving jeff.” The main storyline involving Barry’s quest to save Gene’s career — ultimately, the only way that he believes he’ll be able to redeem himself for killing Janice — may seem noble and a step towards his redemption, but is actually proof of his own gradual path towards irredeemable amorality.

It’s worth mentioning that Barry does indeed love Gene — something that Bill Hader himself confirmed when discussing the episode. As Gene points out to him, Gene is the person responsible for Barry turning his life around, helping him get into acting, and overcoming his past traumas in the war (as Gene puts it, “Not only did I teach you to become a good actor, I taught you to be a good human being”), and Barry is forever thankful for him because of that.

However, Gene’s attempt to kill Barry has locked them in some sort of weird stalemate: either Barry kills Gene, preventing anyone else from ever learning the truth about his criminal past, or Gene accepts Barry’s help to jumpstart his career. In Barry’s mind, helping Gene land a role is a way of paying Gene back for Janice’s murder, with Barry believing that Gene will (hopefully) be thankful towards Barry as a result, and somehow forget all the pain Barry caused him.

Of course, this is all a complete delusion on Barry’s part, almost certainly stemming from his already dubious mental state — something we saw in “forgiving jeff,” when Barry randomly begins hallucinating visions of bullet wounds in people’s heads. As he tells Sally in the middle of his breakdown at her office, he isn’t really trying to help Gene — not on a personal, emotional, or profound level. He just mistakenly believes that helping Gene’s career will somehow redeem himself in Gene’s eyes, mending their relationship and helping Barry overcome his own depression.

Barry wants so badly to be a good person — in spite of all the horrible things he’s done — and he hopes that by getting Gene to acknowledge his good deeds that it will correct any wrongdoings he’s guilty of committing.

Because Barry loves Gene so much, he holds an unbelievable amount of weight on Gene’s assessment of him: If Gene thinks Barry is a bad person, Barry must be a bad person. If Gene says “I love you, Barry,” as Barry pressures him to do in the final moments of the episode, that would mean Gene (in Barry’s eyes) forgives him and is grateful for Barry’s efforts in reigniting his career, making him a good person by proxy.

Ironically, this is juxtaposed with Barry threatening to kill Gene’s family — his son and grandson — should he step out of line and call the police, warning Gene to accept his help or suffer the consequences.

All of this is just further evidence of Barry’s increasingly unstable mental state — his gradual Walter White descent into complete amorality. (Although it’s unknown whether this threat is a bluff on Barry’s part — something to scare Gene into remaining complacent — or whether Barry is actually promising Gene he’ll kill his family if he acts out again.)

Aside from the episode’s main storyline involving Barry and Gene, we’re also beginning to see some deep-seated problems for Sally in her professional life as a showrunner and in her relationship with Barry. As mentioned above, Barry has a nervous breakdown in front of Sally at her office, angrily lashing out at her in front of her entire production team — one of the most tense, uncomfortable scenes in Barry so far, and one that queued Sally into the kind of person Barry secretly is.

If that weren’t enough, Sally also begins facing mounting pressure from studio executives, who bump her series up to a closer release date in order to avoid launching simultaneously with a sitcom that has a previous premise to Sally’s own show.

Though this requires her to renew her focus on the show — giving it her undivided attention so that she’s able to make her due date — Sally returns home, picking up a nice pasta dinner for Barry, setting his place with a fresh beer and gifting a new video game remote control, anxiously awaiting his arrival home.

Sally’s arc throughout this episode is a troubling one. We know that she suffered from domestic abuse at the hands of an old boyfriend, Sam, and here, it seems that she’s reverting back to her more culpable self, instinctively feeling that she’s in the wrong when her Barry lashes out, going out of her way to try and make it up to him as a result.

To Sally, Barry’s breakdown wasn’t an argument or even Barry bursting out in irrational anger. She truly feels she was in the wrong and that Barry was in the right, and that she deserved being yelled at. It’s a deeply concerning development in their relationship — one where Barry may be slowly becoming the perpetrator of domestic abuse against Sally, and one that shows Sally’s struggle to move past her own past trauma and forge a life for herself first and foremost.

It’s difficult to say where the events of Barry will head from here, but it’s plain to see that this third season — though only two episodes in — is perhaps the most downbeat and depressing season of Barry so far, one characterized by mounting mental unease in practically every major character (except for the newly-introduced Fernando — played by the brilliant and effortlessly funny Sandoval — who provides much of the humor for the episode).

Will Barry and Gene’s role on the police series redeem Barry? Is he past redemption entirely?

We’ll have to tune in next Sunday to find out.

Barry airs weekly on HBO and HBO Max, every Sunday at 10 pm EST.

Inflation May Cause Headache for Tourism Industry