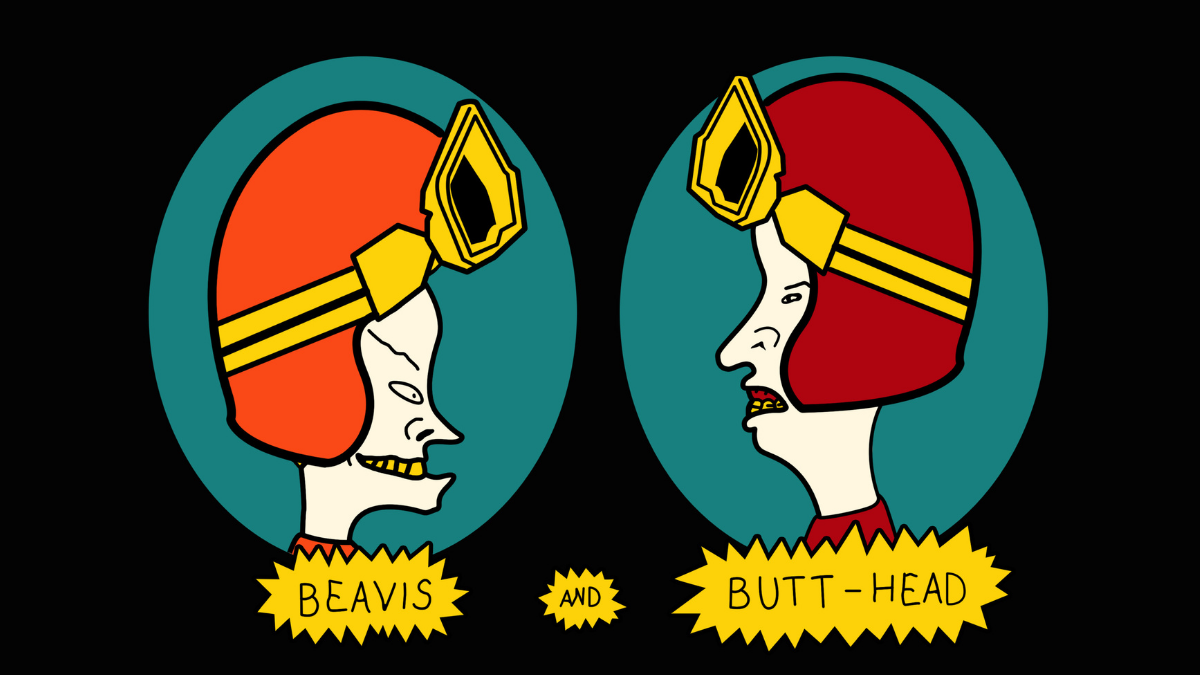 Annoying laughter from two infamous teens ripples through the screen, inviting devoted viewers back to the familiar universe of Beavis and Butthead.

The taller brunette ACDC-adorned teenager matches his ‘Uh-Huh Heh-Heh' giggles with the laughs of the shorter, scrawnier blonde Metallica lover as viewers watch them embark on their lifelong goal to ‘score' and impress women.

Here's a list of their top ten funniest moments to ring in their new flick.

Beavis and Butthead wouldn't be who they are today without their laughter. Low rumblings and musings at the mention of the number 69, giggles at the comment of ‘wood,' and inappropriate laughter throughout tense moments.

Try looking at the cartoonish teens without hearing their infamous “Heh-Heh, Huh-Huhs.” You can't. Every time they laugh, you can't help but laugh at their stupidity or turn the channel away from their ignorance.

Like typical teenagers, the two best friends tend to get into meaningless disputes over inconsequential matters.

Whether Butthead beats Beavis with a wooden glove or Beavis attempts to gouge Butthead's eyes out, each fight ends the same. Both boys forget what they were upset about and make an immature joke.

One character trait spanning the entire history of Beavis is his adoration for fire. Although a controversy revolved around the show's use of the word fire, eventually, MTV permitted Mike Judge to utter the word aloud again. When MTV censored the word, Beavis said similar words that rhymed with fire, such as fryer.

Beavis becomes excited at the thought of fire and makes his desire for more fire known. In a particular episode entitled “Werewolves of Highland,” Beavis and Butthead mock the music video for MGMT's single “Kids.” This episode is the first one since Beavis got clearance to say ‘fire' in the show. Beavis mutters the two-syllable word seven times in twelve seconds, highlighting his pyromania.

Beavis and Butthead's teacher, a peace shirt-toting, blonde-haired hippie, David Van Driessen, tackles the responsibility of attempting to educate the high-schoolers. He speaks in a soothing voice and strums a tune on his guitar.

Perhaps the most comical classroom lesson occurs when the teacher explains the Pythagorean theorem. Butthead raises his hand in response to the chalkboard drawing of the Pythagorean Theorem. Van Driessen answers, “Yes, Butthead?”

“We shouldn't have to learn this.”

“Cause my uncle's not a monkey.”

“This is geometry, not evolution.”

Of course, Butthead responds with what he thinks is a clever comeback, “Tell that to the Lord.”

Beavis then says, “But it shall go unanswered, as you roam the fiery pit of damnation.”

Quite an interesting math class.

6. The “Breaking the Law” Chant

Episode 16 of season two, “Lawn and Garden,” shows us Butthead discovering a grasshopper and sentencing it to death. Beavis cuts the grasshopper in half with a chainsaw, not giving enough space for Butthead's index finger, and saws it off with the bug.

Butthead's bone protrudes, and blood splurts out while Butthead mumbles, “He-heh, that was cool.” Beavis adds to the excitement by chanting, “Breaking the law, breaking the law.”

In its prime, MTV played music videos during commercial breaks. To complement this, Beavis and Butthead sometimes lent their commentary on specific music videos. This segment featured Radiohead, Nirvana, and Green Day critiques, to name a few, and if the music moved the boys, they'd get up and dance.

Butthead seemed to invent his style of twerking, folded in half near his couch and throwing his body from side to side, while Beavis kicked his leg up and down with an elegant tempo.

Cars line up around the fast-food chain filled with hungry families who want a cheeseburger and fries to complete the night. But, a minor issue arises, Beavis and Butthead are the only workers on shift. So, instead of responding to customers, the boys throw the ringing phone into the fryer and tell their customers to “Shut up and go away.”

Who doesn't love a good foil?

Daria, the witty, charismatic, intelligent, and monotonous character, emerged in Beavis and Butthead. She is only in a few episodes with the boys; however, her direct foil to them proves the show's satirical mastery. So much so that Daria had a successful spinoff series.

In the “Scientific Stuff” episode, Daria and the boys work on a science project together. Daria stands in front of the class, gesturing to Beavis, who knocks on his hollow head, and Butthead, who blows his thumb.

She says, “And so we raise an age-old question, idiocy, genetic or environmental? Our examples of Beavis and Butthead indicate that both are contributing factors.”

Beavis and Butthead spend excessive time sprawled out on the couch watching TV. The episode “Most Wanted” presents the boys with the news of a killer on the loose. The evening news segment announces a cash reward for the person who finds the dangerous killer. Since the killer has ‘killer' tattooed on his forehead, the news host mentions he shouldn't be hard to identify.

Beavis and Butthead take the promise of cash (and the premise of new tattoos) to experiment as sleuths. Funny enough, they stumble upon the killer in their backyard. However, when he shows them his tattoo, they pronounce ‘killer' as ‘Kyler' and invite him inside to give them tattoos.

In an interesting twist, the killer “finds himself” through the boys and turns himself in, devoting the rest of his life to giving other inmates tattoos.

The winner is Beavis' esteemed alter ego, Cornholio. This beast emerges when Beavis consumes generous doses of sugar, caffeine, or sometimes unspecified pills. Once Cornholio is activated, Beavis yanks his shirt over his head, raises his arms, and speedwalks in circles. He repeats phrases such as, “I am Cornholio! I need TP for my bunghole!” Or, “Are you threatening me?”

The best part of Cornholio? Beavis has no recollection of him.

Beavis and Butthead Do the Universe is now playing on Paramount+.

Follow us to stay updated on what movies are playing now in theaters.

From General Hospital to G.I. Jane, at 59, Demi Moore’s Net Worth Is Shocking