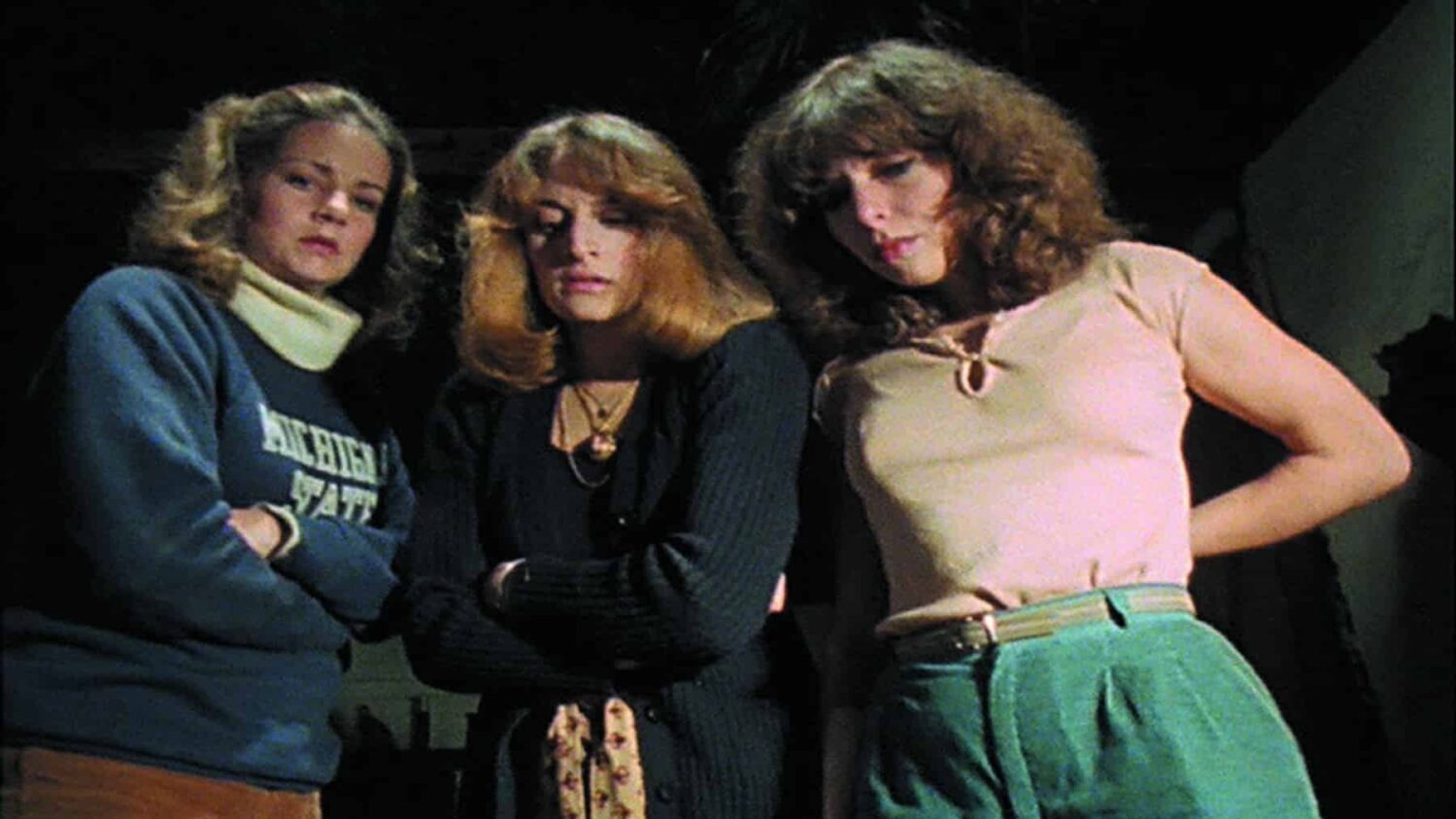 Many of the major directors and genres of modern horror were established during the 70s. But Cronenberg, Carpenter, Stephen King adaptations, body horror, slashers and more replicated wetly and crawled into their true skin suits in the high gloss 80s.  Look upon the most hideous visages of the decade and despair!

(Note: Only one film per director, because a list of Carpenter and Cronenberg would be repetitive. But tempting! But, no.)

Lots of mad scientists cackle with glee. But it’s hard to think of a Dr. Frankenstein knock-off who takes as much sheer pleasure in his work as director Stuart Gordon and his self-insert, Herbert West (Jeffrey Coombs.)

Re-Animator has a notional plot in there about a couple (Bruce Abbott and Barbara Crampton) thwarted by her disapproving professor father. But mainly the film is just an excuse for the intensely smirking West to pull out his glowing green serum and inject it into various corpses, leading to chaos and macabre FX.  Nothing quite captures the joy of horror films like Herbert looking back and forth between a head and a body and exclaiming, “I’ve never done whole parts before!” Then, of course, he brings them back to life.

Stanley Kubrick and Jack Nicholson spend two and a half hours of The Shining trying to see who can chew more scenery. Nicholson smiles and chuckles and deploys advanced eyebrow-waggling technology. But it’s still no contest when Kubrick has the camera and can make the scenery eat itself.

The haunted Overlook Hotel had a personality of its own in Stephen King’s original novel. That’s nothing, though compared to Kubrick’s adaptation, which virtually bursts with flamboyant over-exuberance, from its patterned rugs to its elevators full of blood to the hallways vibrating with the sawing menace of Penderecki. You can just about see the director skipping through the ballroom or knocking on each of those rows of doors, reveling in the perfectly composed visuals of his magnificent, malevolent machine. Jack, Jack; you can try not to be a dull boy, but you never stood a chance.

Blue Velvet is usually classified as a noir or a thriller or an art film rather than as horror. Dennis Hopper’s volcanically bizarre, gas-mask-huffing performance as the villainous Frank alone makes the film right for this list, though.

Lynch’s shadow-haunted suburbia occupies a space more than half “In Dreams,” as the hauntingly reverb-and-agony drenched Roy Orbison song on the soundtrack puts it. Virtuous Jeffrey (Kyle McLachlan) rides those warbled notes into a twilit closet of obsession and twisted desire where he finds Dorothy Vallens (Isabella Rossellini) waiting for him. But the sunny moments of innocent love with Sandy (Laura Dern) are almost creepier; in their scenes, you feel like you’re watching mannequins perched on the edge of an abyss.

Sam Raimi perfected his Loony Tunes brand of horror comedy with the 1987 remake of Evil Dead II. But as great as that film is, I still pledge my love to the original. The acting is awkward and it lacks the demented genius of Raimi’s follow-ups. But its low budget gives it an improvisatory grunginess which is simultaneously charming and terrifying.

Bruce Campbell as Ash would become a better actor. But his charisma is already firmly in place as the shaky-cam roars through the woods around him, magically changing friends and lovers into ranting deadites. The virtuoso moments—as when the camera peers at Ash from through the floorboards, from the ceiling, from behind the clock—make it seem as if the film is a conspiracy against its protagonist. The indifferent, stiff actors are just waiting to be possessed by the director/demon, eating their souls and giving them life.

Scanners, Videodrome, and The Fly established director David Cronenberg as a master of body horror, exploding heads, and giant larva babies. But his best of the decade is this largely gore-free Stephen King adaptation.

Johnny Smith (Christopher Walken) is in a car crash; he wakes up from his coma five years later with atrophied muscles and the ability to see the future of anyone he touches. When he discovers presidential candidate Greg Stillson (Martin Sheen) will start a nuclear war, he sets himself to the task of assassination. The movie’s cold New England setting is the landscape of repression and despair, through which a cadaverous Walken hobbles like a man who ran out of time long ago.

James Cameron’s Terminator takes unstoppable killers like Michael and Jason, gives them a chrome tune-up and a science-fiction logic, and sends them out to slaughter street thugs and cops alike. Arnold Schwarzenegger radiates glowering charisma. Linda Hamilton as Sarah Connor goes from ditzy 80s every woman to Final Girl force of nature. And Kyle Reese (Michael Biehn) sounds like he’s spewing adrenaline from his hindbrain as he sputters, “It can't be reasoned with, it can't be bargained with…it doesn't feel pity of remorse or fear…and it absolutely will not stop! Ever! Until you are dead!” Though Terminator’s got an action movie chassis, the heart-pumping black fuel under there is all horror.

Alan Parker’s Angel Heart looks like it’s going to be a gritty noir in which morally ambiguous heroic detective Harry Angel (Mickey Rourke) brings order to the evil New Orleans bayou. Instead, we learn that Harry is neither morally ambiguous nor a hero, and whatever evil he finds he has brought with him.

The film systematically reverses every Hollywood expectation about what is good and what is horror. Male/female, white/black, hero/villain, all the dualities flip with the inevitable rotation of the film’s slow, ubiquitous ceiling fans. Beautifully shot and featuring indelible performances by Lisa Bonet, Robert DeNiro, Charlotte Rampling, and Rourke himself, this is one of the most unblinkingly ruthless films Hollywood has ever produced.

Of course, the end is the apocalypse, with salaryman and fetishist fused together into a single mass with rotating corkscrew unmentionable and set on destroying Tokyo. The future has rarely looked so exuberantly nightmarish.

There are phallic symbols and then there is the 30-foot monster white worm god summoned from the deeps by the painted blue, strap-on wearing Lady Sylvia (Amanda Donohoe).

That’s not even the most egregiously over-the-top single entendre in Ken Russell’s campy tour-de-force about a snake cult slithering through Derbyshire. Lady Syliva spits at crucifixes and seduces smelly hitchhikers. An accursed country policeman dances helplessly to the forlorn snake-charming sound of a bagpipe. A very young Hugh Grant slowly realizes the truth…too late? You can but hope so. If you’re not rooting for the snake apocalypse in this one, you’re missing the sinuous thrust.

John Carpenter never surpassed his masterpiece of icy, oozing male paranoia, but no other filmmaker ever did either. In “The Thing” the crew of an Antarctic station is invaded by some alien something, which devours and then replaces them. The stunning, stomach-churning scene in which one man’s head slides off his neck, sprouts insect legs, and then scurries away is arguably the greatest effects scene in horror movie history. No computer will ever match what Rob Bottin could do with a lump rubber foam and a few cases of K-Y jelly.

Great as the spectacular grotesques are, though, what really makes the film is the intense aura of creeping suspicion as the passel of comfortably familiar character actors turn on each other in terror and rage. “Tough is a hard thing to come by,” MacReady (Kurt Russell) says with resignation. “The Thing” shows that tough guy independence and abject shapeless monstrosities are one and the same.

There are lots of films that almost made this list: Gremlins, Vampire’s Kiss, Friday the 13th Part VII (so I like Friday the 13th Part VII, okay?) I’d be remiss, though if I didn’t mention Society, Brian Yuzna’s eye-popping (literally) FX extravaganza in which vampiric shape-shifters live among us and amuse themselves by merging into incestuous globs. The movie was finished in 1989, but not released until 1992. Some movies are just too sinisterly shapeless to be contained in one decade.

12 Netflix Shows That Should Do a Crossover With Stranger Things

Queasy Travellers Rejoice! These 10 Tips Will Help You Beat Airsickness