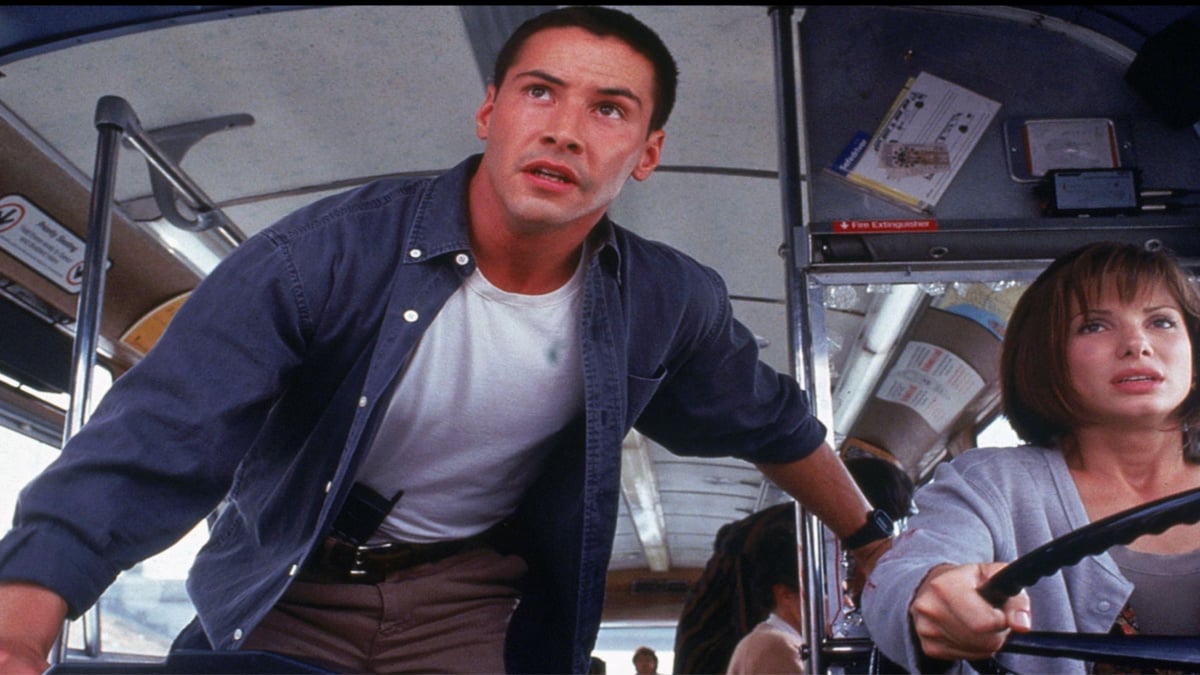 Are you in the mood for nostalgia? Redditor u/jaft0000 asked, “What 90s movies do you find very nostalgic? I do not know what it is, but there is something about movies from the 1990s that bring me back more than any cartoon or kids' show could.”

They continued, “Any genre but preferably the more serious ones like drama or thriller.” Redditors responded with several 90s classics. So here are the top nineties films for nostalgia in no particular order.

Speed is an action thrill ride that tells the story of a madman who armed a bus with explosives. If the police don't meet his financial demands or the bus slows to under 50MPH, it will explode. A young officer (Keanu Reeves) jumps onto the bus, and Wildcat Annie (Sandra Bullock) takes the wheel. It's a heart-thumper.

Jurassic Park is the monumental start of the Jurassic film franchise. It tells the backstory of how the scientists created the dinosaurs before unleashing carnivorous disasters. It's a wild chase that had cinema audiences gasping.

The Craft is an iconic 90s film that featured several nightmarish scenes. It follows a teen new to a Catholic prep high school. She befriends a group of outcasted girls who practice witchcraft. At first, they conjure curses and spells on people who mistreat them, but it quickly becomes something more.

Forrest Gump follows a dimwitted but kindhearted man (Tom Hanks) who shares his life story with strangers that come and go at a bus stop. The film places him in essential parts of history in and around the Vietnam War. It's filled with life lessons, love, laughter, and heartache. Oh, and great music!

Heart and Souls tell the story of four strangers who died in a bus crash in 1959 before being attached to a baby. They can't move beyond an invisible barrier and don't understand until he's an adult (Robert Downey Jr.) they were supposed to use to ‘right their wrongs' before the bus to heaven picks them up.

So now they are racing against the clock, and adult Thomas is not having it! The film co-stars Elisabeth Shue, Kyra Sedgwick, Alfre Woodard, Tom Sizemore, and Charles Grodin.

American Pie is a coming-of-age sex comedy that centers on five classmates who attend East Great Falls High. The teens make a pact to lose their virginity before high school graduation.

The title refers to when the film's protagonist puts his manhood in a warm apple pie after being told it feels like third base. There have been three sequels and five spinoffs.

The Wedding Singer follows Robbie Hart (Adam Sandler) getting left at the altar and his subsequent friendship with a waitress (Drew Barrymore) who caters to the weddings he sings.

She's engaged and asks him to please help her plan her wedding because he knows all the places to get good deals. He reluctantly agrees, but love blossoms between the two along the way. It's definitely a 90s movie, but it gives major 80s vibes.

The Fugitive is an action-packed thrill chase of cat and mouse. An escaped doctor (Harrison Ford) convicted of killing his wife sets out to prove his innocence.

Deputy U.S. Marshal Sam Gerard (Tommy Lee Jones) and his team quickly assemble their hunt. The Fugitive has several twists and turns. It also has a sequel, U.S. Marshalls (1998).

What do you think? Did these Redditors get it right, or are some major nineties 90s nostalgic films missing from this list?

This article was produced and syndicated by Wealth of Geeks. (<– article canonical link)