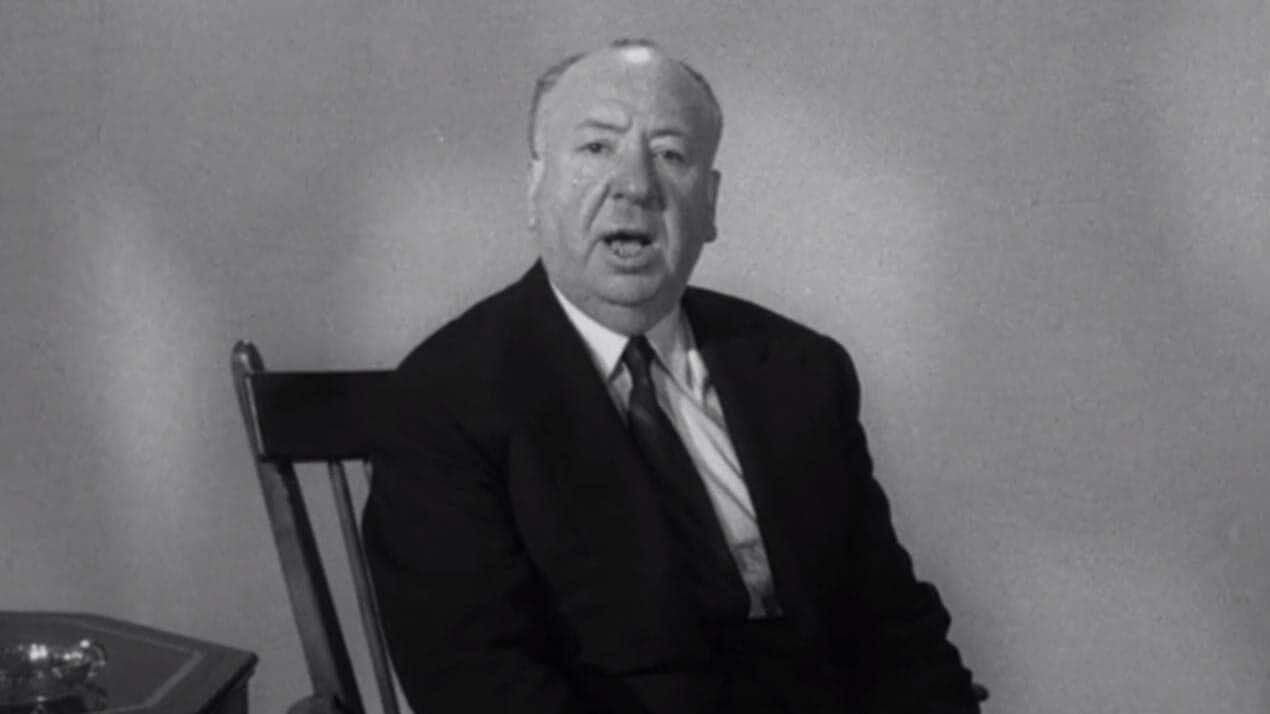 There is no director more iconic or integral to the development of film than Alfred Hitchcock. Making his debut in the late silent era, Hitchcock slowly rose to prominence in the early days of sound, spearheading some of the most famous movies of the '40s, '50s, and '60s.

Nowadays, Hitchcock is often referred to as the ‘Master of Suspense' — a name he clearly earned through his numerous thrillers, horror films, and psychological dramas.

But even if you take “suspense” to mean holding an audience's attention rather than relating to the thriller field, Hitchcock was a master. In any of his films, he could spark an audience member's interest, holding them on the edge of their seat as the action built to exciting, unexpected conclusions.

Hitchcock's influence on the filmmaking process is undeniable, his successors including everyone from Steven Spielberg and Brian De Palma to David Fincher and Christopher Nolan. With how utterly massive Hitch's impressive filmography is, we thought we'd look at some of the director's most notable films, listing where they're currently streaming.

John Robie (Cary Grant) is a former professional jewel thief who's since retired to the French Riviera. When a recent string of burglaries bearing Robie's trademarks began cropping up, Robie must set out to catch the thief, proving his innocence in the eyes of the police.

To Catch a Thief marked the third and final collaboration between Hitchcock and Grace Kelly — one of the best leading ladies the director had ever worked with. All of the signature Hitchcockian elements are there (the mysterious blonde femme fatale, a framed man trying to prove he's innocent, etc.), and the chemistry between Grant and Kelly makes the film a '50s classic.

Discovering his wife (Grace Kelly) is having an affair with a writer (Robert Cummings), a former tennis pro (Ray Milland) blackmails a university acquaintance (Anthony Dawson) into killing her.

From Stage to Film

Dial M for Murder is one of the several films Hitchcock adapted from a pre-existing stage play, the drama of the original narrative translating superbly onto film. Milland is transformative as the cuckolded husband, using his wife's affair as a means to secure his weighty inheritance. But it's Kelly herself that makes the film what it is — portraying the lead character as a complex, competent, and incredibly strong heroine.

Not Allowed To Work

If Hitchcock had had his way, Suspicion would've been far better — ending with the reveal that Lina's suspicions about her new husband were correct. Unfortunately, the studio axed those plans, preferring to keep Grant the misunderstood playboy rather than casting him as an outright villain. As a result, the movie tends to wither away at its anti-climactic ending, even if the suspense Hitchcock builds in the proceeding hour and a half is nothing short of excellent.

Iris (Margaret Lockwood) is a fun-loving English tourist traveling aboard a continental train through Europe. Upon learning that an elderly passenger (May Whitty) has disappeared without a trace, Iris and a young musician (Michael Redgrave) set out to find her.

The Lady Vanishes marks one of Hitchcock's most notable early films after the 1935 release of The 39 Steps. With this movie, Hitchcock seemed to embrace his directorial voice, introducing many themes that would become prevalent throughout his later work (the central mystery, the disbelieving romantic interest, and unexpectedly hilarious moments that still hold up to this day).

Brandon (John Dall) and Phillip (Farley Granger) are two academics who murder their “inferior” schoolmate to see if they can get away with the perfect murder. Inviting various guests over to a dinner party after the murder has taken place, the boys' former teacher (James Stewart) becomes increasingly suspicious of their behavior.

What separates Rope from being a good film and a great one is the lengths Hitchcock went to when making it. Shot primarily in more extended, uninterrupted takes, the unique craftsmanship of the movie alone makes it worth appreciation. Bold and experimental for its day, it's since become one of Hitchcock's most celebrated films, the longer takes also allowing each of the performers to shine in their own way.

Richard Hannay (Robert Donat) is a Canadian tourist visiting London. After falsely being accused of murdering a spy, Hannay goes on the run to prove his innocence, exposing a sinister conspiracy involving an espionage ring known as “The 39 Steps.”

Hitchcock's first memorable sound picture, The 39 Steps is one of Hitch's earliest and most engrossing spy films (a genre he would perfect with Notorious and North by Northwest). It bears many of the director's signature elements — a vague MacGuffin, a combative female lead, humorous dialogue, a wrongly accused man on the lam — and can almost be considered the first true Hitchcock movie — save, perhaps, for The Lodger.

9. Shadow of a Doubt

Charlie (Teresa Wright) is a teenage girl living in Santa Rosa who is thrilled to learn her favorite uncle (Joseph Cotten) will be visiting. The more time she spends with her uncle, though, the more she begins to wonder if he's actually a notorious serial killer known as the “Merry Widow Murderer.”

In many ways, Shadow of a Doubt seems like the film Hitchcock had tried to make with Suspicion. Allowed greater freedom in terms of the main antagonist's sinister personality, Shadow of a Doubt is a first-rate thriller propelled by Cotten's indelible performance and playwright Thornton Wilder's wonderful script.

It takes a truly remarkable director to capture the Gothic excellence of Daphne du Maurier's beloved Rebecca. Fortunately, by 1940, Hitchcock was a virtual master of the craft. Bottling the sense of mystery that envelopes du Maurier's original novel, Rebecca marked Hitchcock's first Hollywood film. With skillful actors like Olivier and Fontaine at his disposal, Hitchcock oversaw a film so wonderfully directed, audiences immediately took notice of the filmmaker's obvious talent. It's also the director's only Academy Award win.

Melanie (Tippi Hedren) is a San Francisco socialite who journeys to the sleepy town of Bodega Bay in northern California. There, she begins to notice the native bird population acting odd, culminating in several unexplained avian attacks on the local population.

From the plot synopsis alone, The Birds could've been an utter disaster — a campy, over-the-top mess that relied on dated practical effects. But the genius of this 1963 film is how sparingly Hitchcock relied on the movie's effects, choosing instead to build a foreboding atmosphere by simply showing the birds on a telephone pole or on a jungle gym. It's a lesson in substance over style, elevating The Birds from a potentially forgettable B-movie into one of the definitive horror films of the 1960s.

6. Strangers on a Train

Meeting by chance on a train, a tennis pro (Farley Granger) and an unstable passenger (Robert Walker) concoct a hypothetical plan to kill the individuals inconveniencing their personal lives. When the stranger ends up making the plan a reality, the pro is menaced to complete his end of the bargain.

If it weren't for Psycho‘s Norman Bates, Strangers on a Train would boast the most twisted villain in any of Hitchcock's films. Played by an amazing Robert Walker, Strangers on a Train is a palpable adaptation of Patricia Highsmith's novel, containing some of the most well-constructed scenes ever put to film.

Roger Thornhill (Cary Grant) is a successful New York City ad executive who is mistaken for being a secret agent. Pursued by a group of enemy spies, Roger embarks on a journey across the country, enlisting the help of a woman (Eva Marie Saint) who might be in cahoots with the men trying to eliminate him.

Compared to the outright seriousness Hitchcock took with Notorious, North by Northwest feels almost like a satirization of the espionage film. One of the more outright humorous of Hitchcock's movies, it's no wonder that practically every spy movie that followed (including the Sean Connery-led Bond films) looked to North by Northwest as a helpful blueprint. It's funny, well-paced, always moving in terms of its plot, and only slightly campy in terms of its action and characters.

LB Jeffries (James Stewart) is a famous photographer temporarily left in a wheelchair owing to a broken leg. Recovering in his Greenwich Village apartment, Jeffries spends his days spying on his neighbors, beginning to suspect one of them of having murdered his wife (Raymond Burr).

With the entirety of its narrative confined to Jeffires' apartment, Rear Window comes across as Hitchcock challenging himself, wondering how he can create a thriller with self-imposed limits on available locations. Luckily, as in most of Hitchcock's movies, the experiment pays off, giving way to a cinematic experience that practically merges viewers with Jeffries' point of view, becoming more and more complicit in his growing voyeuristic obsessions.

Psycho remains arguably the most crucial film in Hitch's entire filmography. In it, he created the proto-slasher itself, laying the groundwork for every big name horror franchise that came about in the '70s and '80s. Controversially received in 1960, it was the biggest financial success of his career, ushering in a new level of acceptability in regards to onscreen depictions of violence and sexuality.

Alicia (Ingrid Bergman) is a reckless German-American playgirl whose father is prosecuted for his ties to the Nazi regime. Recruited by an alluring government agent (Cary Grant), Alicia is tasked with going undercover and infiltrating a group of Nazi sympathizers gathered in Rio de Janeiro.

A love story under the guise of a spy film, Notorious is without a doubt Hitchcock's crowning achievement in the espionage genre. Bergman was always one of Hitch's most compelling leads, and here we see a double-sided performance to her character: cocky, overconfident, and alluring, yet hindered by deep-seated insecurity. As the main male star, Grant is the exceptional prototypical spy, his professional relationship with Bergman's Alicia complicated by their romantic feelings towards each other.

Scottie (James Stewart) is a former San Francisco police officer who retired from the force after developing a crippling fear of heights. Hired to surveill the wife (Kim Novak) of an old friend, Scottie feels himself having increasing difficulty completing the job as his vertigo worsens.

One of the Best

There's a reason Vertigo continues to rank as one of the best movies of all time. In it, Hitchcock strikes an effective balance between psychological thriller and an almost surrealistic art film. Like Stewart's Scottie, we're never quite sure what we're seeing is real, or just a product of our individual imagination. It's a level of ambiguity few movies have ever employed as profoundly as Hitchcock does here, giving way to one of the most suspenseful thrillers ever made.

Rajamouli’s RRR Is Mad, Masculine Extravagance. But Does It Merit All the Fame and Fawning?