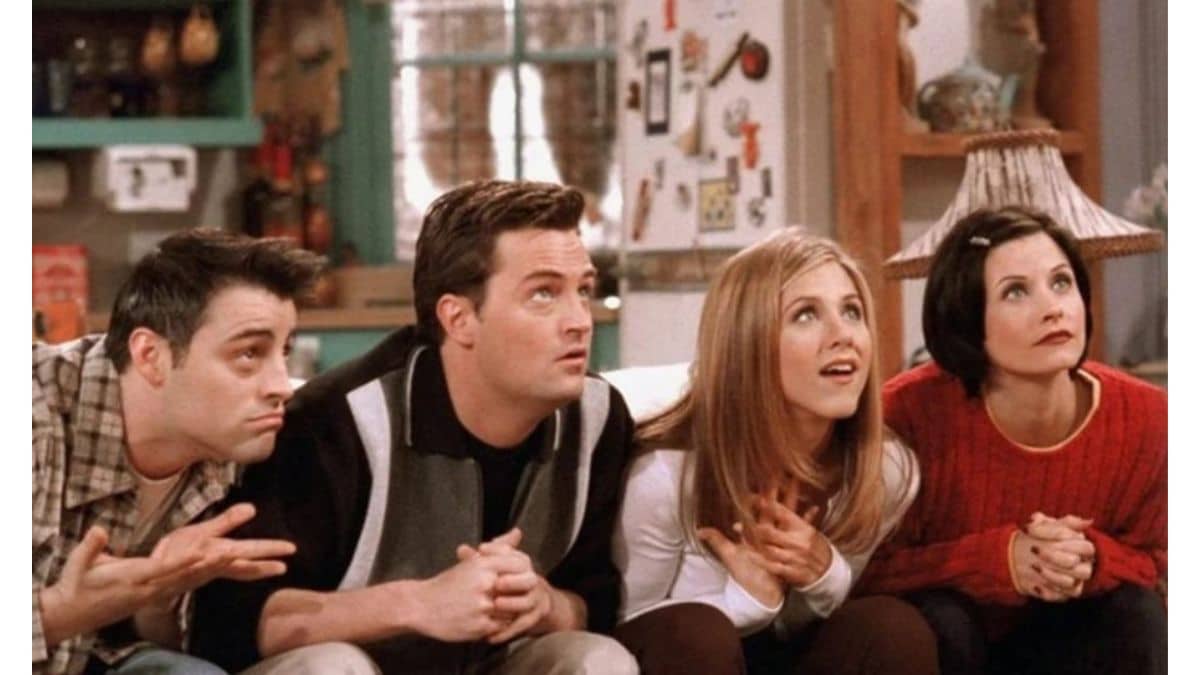 Friends gave us ten years of laughter and tears, and Chandler Bing (Matthew Perry) was responsible for both. So recently, someone asked, “What are some of your favorite Chandler Bing moments?” Here are the top-voted responses from die-hard Friends fans.

In “The One with Joey's New Brain,” Ross plans a special surprise for Monica and Chandler's wedding. He's learning to play “Celebration” by Kool and the Gang on bagpipes. Neither Monica nor Chandler wants him to play at the wedding. They can hear him practicing across the street, and Monica asks Chandler, “Why is your family Irish?” He responds, “Why is your family ROSS?!”

In “The One with the Cat,” Chandler comes home to find Joey locked in their entertainment cabinet and the entire apartment wiped out. Joey explains the circumstances, and Chandler is dumbfounded he got into it voluntarily. Joey asks, “You know what I'm gonna do if I ever see that guy again?” Chandler responds, “Bend over?!”

8. The One With the Metaphorical Tunnel S3, Episode 4

Chandler attempts to overcome his fear of commitment with Janice by giving her a drawer for her clothes. However, she panics and grabs her things to head out the door.

And Chandler responds, “Don't go. I've scared you. I've said too much. I'm hopeless and awkward and desperate for love!” Then, he calls her answering machine and apologizes for chasing her down the street before running out his door after her.

Before his best friend marries his sister, Ross decides to have the older brother talk with Chandler. Ross explains that for the next few minutes, he's not his friend before threatening if he ever hurts Monica, he will kick his bum.

Chandler laughs, and Ross is not amused. After Ross informs him that the minutes are up and they are friends again, Chandler says, “You won't believe what Monica's older brother just said to me.”

6. The One With Rachel's Assistant S7, Episode 4

After Monica tricks Chandler into telling him Ross' Disneyland story, Ross and the two of them tell each other's secrets. Ross confesses, “Chandler once entered a Vanilla Ice contest and won!” Chandler replies, “Ross came in fourth and cried!”

During the trivia game that determined Monica and Rachel would lose their apartment to Chandler and Joey, Rachel gives a wrong answer, and Monica admits she should know it because they steal his TV guide every week. So Ross informs Rachel that she is incorrect and that it comes to Chanandler Bong. Chandler responds, “Actually, it's Miss Chanandler Bong.”

In “The One with the Tea Leaves,” things between Joey and Rachel are awkward because he professed his love for her the night before. But, unlike Monica, Chandler Muriel Bing doesn't dole out advice and informs Rachel, “I'm not great at advice, but can I interest you in a sarcastic comment?”

In “The One With Frank Jr.,” Joey is building a giant entertainment center and accidentally drills through Chandler's bedroom wall right by his head. Chandler is upset, and Joey responds, “Oh, I'm sorry. Did I get you? And Chandler says, “No, you didn't get me! It's an electric drill! You get me. You kill me!”

After Joey and Chandler accidentally leave Ben on the bus while flirting with a couple of women, they go to pick him up from the Department of Human Services. There are two babies, and the guys are unsure which one is Ben, so Joey wants to flip for it and assigns heads for ducks because “Ducks have heads.” Chandler responds, “What kind of scary-*ss clowns came to your birthday?!”

The number one fan-voted Chandler Bing moment was when he asked, “Was that place…THE SUN???” Ross, of course, could not follow directions for getting his spray, despite his Ph.D. “I'm an eight!”

What do you think? Did Reddit get this right, or is your favorite Chandler Bing moment missing from this list? Also, check out who people voted as the most annoying character from Friends.