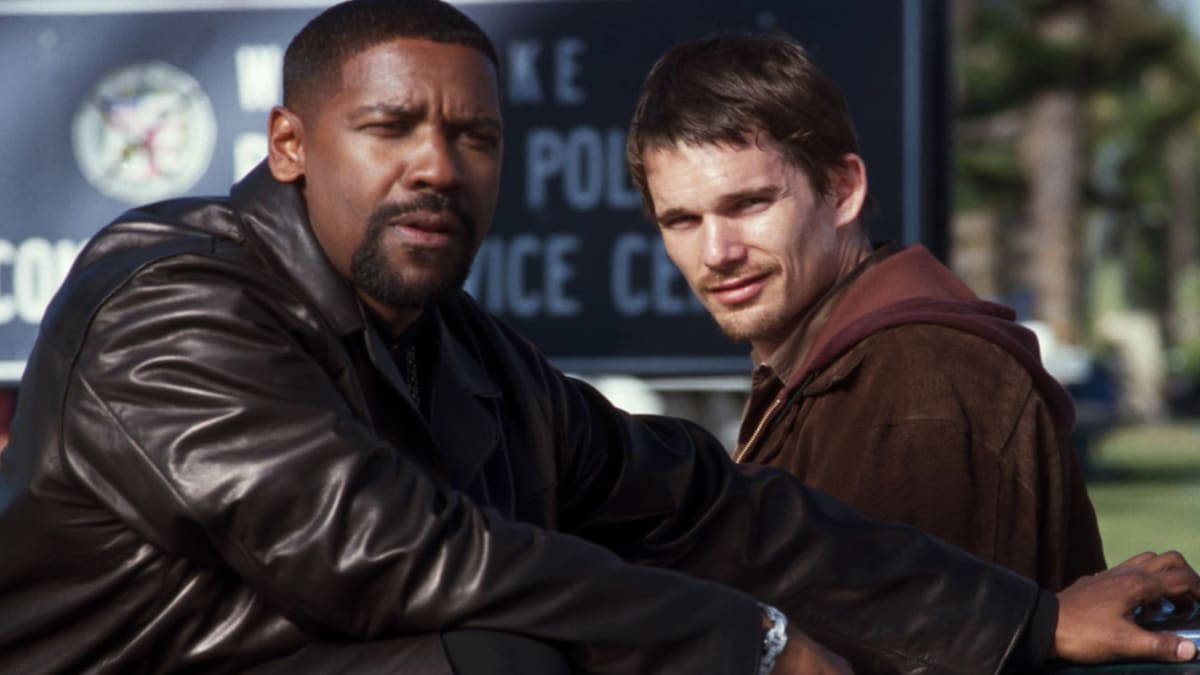 Denzel Washington has starred in over 48 films since 1981, and he doesn't appear to be slowing down any time soon. Washington has done everything from gritty dramas to romantic comedies to action thrillers. The two-time Oscar winner is arguably one of the best actors of this generation, though which of his films are his best is often up for debate. Does winning an award make the film one of the best? Or is it the screenplay? Or is it simply that Washington has such charisma on the screen one is merely drawn in by his acting? Let's break down Denzel Washington's 25 best films from top to bottom.

Set during the Civil War with a focus on the first all-Black volunteer regiment for the Union, Glory is undeniably one of Washington's best. Glory gave Denzel Washington his first Oscar for Best Actor in a Supporting Role as Trip. Though the main character is Matthew Broderick's Colonel Robert Gould, viewers cannot help but be drawn to Trip's emotional power and vulnerability. Washington's ability to inject humanity into inhumane moments makes this performance stand out.

Spike Lee's biopic about the controversial civil rights leader is one of Denzel Washington's most famous roles. In Malcolm X, Washington takes viewers on a masterful journey through all the sides of Malcolm's personality. Not only is the film significant in cinematic history, but it also reminds viewers that winning an award is not always the definition of a good film or actor. Many consider Washington's loss to Al Pacino in the Best Actor category at the 1993 Oscars one of the biggest snubs of all time.

The Academy couldn't deny Denzel Washington after his turn as corrupt LA Detective Alonzo Harris in Training Day. Is Harris a good guy? Is he a bad guy? Washington's performance leaves viewers guessing for a large portion of the film. Even though he won his second Oscar playing a corrupt human being, Washington's Detective Harris was such a compelling bad guy it was challenging to know who to root for (until the end of the film, of course).

Almost all of Crimson Tide is set inside a naval submarine, the USS Alabama. This scaled-down, almost claustrophobic set allows some of the most intense dialogue between Denzel Washington and Gene Hackman to explode off the screen. While the story is fictional, it is based on the Cuban Missile Crisis, which only ups the ante in terms of whether or not fiction would become a reality. Washington's unproven yet open-minded Lieutenant Commander Ron Hunter is brilliant against Hackman's stoic, war-weary Captain Frank Ramsey.

Denzel Washington had already won a Tony for the 2010 stage revival of Fences when he served as director, producer, and star of the same-named film in 2016. He reprised his role as former baseball player Troy Maxon alongside Viola Davis as his wife, Rose. Washington's portrayal of the complexities of Troy's past and present self is entirely relatable and reveal a deeper layer of vulnerability in his acting style.

Washington appeared in several movies with brothers Tony Scott and Ridley Scott as his director. 2007's American Gangster is one of his most memorable roles under Ridley Scott's direction. In equal measure, he played real-life drug kingpin Frank Lucas with both swagger and menace. Denzel Washington's ability to make viewers respect and hate his character in equal measure is quite a feat.

Robert McCall is a defender of the defenseless in director Antoine Fuqua's The Equalizer. Denzel Washington is phenomenal as the quiet but skilled vigilante determined to help those who cannot help themselves. Many action sequences seem over-the-top, but the dialogue Washington's character shares with the movie's other characters grounds the film.

In The Pelican Brief, alongside Hollywood darling Julia Roberts, Denzel Washington plays good guy newsman to Robert's law student on the run. Helped along by the source material of the same-named John Grisham novel, The Pelican Brief was well received by audiences and critics alike. A thrilling film that keeps viewers on the edge of their seats, Washington rose to fame thanks to his magnetic presence on the screen in this movie.

For many reasons, Deja Vu is an underrated film, but not because of Washington's performance. Though a bit of reality suspension is necessary to accept the time-traveling aspects of the movie, Deja Vu showcases Denzel Washington's ability to make a story believable. If nothing else, he demonstrates how important the human element is, even to a film pushing a “what if” technological narrative.

Another weird yet captivating movie, Fallen, is one of Denzel Washington's creepiest. Detective John Hobbes witnesses the execution of a serial killer he helped catch, but soon other murders begin happening with the same characteristics as the murders committed by the executed serial killer. Washington's rapport with his partner, played by John Goodman, keeps the film realistic instead of falling into a religious trope.

Tony Scott directs Washington in this film about an ex-CIA operative who accepts a job as a bodyguard for a wealthy businessman in Mexico City. Despite its less-than-warm critical reception, Washington delivers a raw, moving performance in Man on Fire. He is burnt out and has given up on life until he begins to care for the 9-year-old girl he has been hired to protect. Washington's portrayal of vigilante justice is both harrowing and emotionally poignant.

A predictable sports movie about an underdog football team in 1970s Virginia, Remember the Titans allows Denzel Washington to elevate the material. His commitment to the role of Coach Herman Boone raises the performances of everyone else in the cast as well. Without Washington, Remember the Titans would be another cheesy, feel-good film that one would easily forget.

The Preacher's Wife is another feel-good film with Denzel Washington in a significant role. Though his chemistry with Whitney Houston's character was obvious, the movie lacked a consistent narrative and relied too heavily on sappy tropes and too many subplots. However, Washington is delightful and fun, and The Preacher's Wife remains one of his most joyful works.

Leading an all-star cast in The Magnificent Seven, Denzel Washington shines as US Marshal Sam Chisholm. Swagger and bravado are not in short supply, and Washington has the most swagger. While critics did not think the film was unique or creative, everyone agreed that the ensemble cast was one of the highlights.

Denzel Washington's character in The Manchurian Candidate spends the majority of the film seeking to unravel the secrets of a vice-presidential candidate he previously served with during the Gulf War. His harrowing performance as Major Ben Marco opposite Liev Schreiber's Sergeant Raymond Shaw is compelling and anxiety-inducing. You want to believe him and uncover the truth just as Marco does.

2010's Unstoppable stars Chris Pine opposite Denzel Washington as two railroad engineers who attempt to stop a runaway train before it crashes and explodes. Pine is a newbie, and Washington is a seasoned railroad veteran on the verge of retirement. The push and pull of their relationship dynamics amidst the drama of the runaway train keeps viewers pulled in until the very end.

The Great Debaters is directed by and stars Denzel Washington as Melvin B. Tolson, a real-life debate coach at Wiley College. Tolson wants to challenge the famous Harvard University debate team to a debate against Wiley College. According to Rotten Tomatoes, the film scored a 79% among critics. While some argued the film was too formulaic, others said that the movie was positive and uplifting.

Tom Hanks and Denzel Washington in one movie? Philadelphia delivered that to theaters in 1993, and the relevance the film still enjoys today can be credited to the two men who masterfully fulfilled their roles. Joe Miller, Washington's character, grapples with his prejudices and ultimately changes thoughts based on his attorney/client relationship with Hanks' Andrew Beckett. Hanks won an Oscar for his role, but Washington carries his part in the movie equally.

Another Spike Lee movie starring Washington, Inside Man, is fast-paced and incredibly entertaining. Washington does an excellent job of creating pressure and anxiety through every scene. He acts as an NYPD hostage negotiator against a crew of robbers who hold a bank hostage for 24 hours. Inside Man is a tense thriller, and action movie all rolled into one.

Playing an alcoholic pilot who manages to crash-land his plane despite being intoxicated, Denzel Washington received his sixth Oscar nomination for Flight. He plays a man who is human and thus flawed, which is understandable to anyone trying to make their way in today's world. His compelling, honest portrayal is the most persuasive part of the movie.

Denzel Washington received his fourth Oscar nomination for his depiction of real-life boxer Rubin “Hurricane” Carter in The Hurricane. Carter was wrongfully imprisoned for 20 years and spent most of his life trying to clear his name. Though critics took issue with some of the dramatized and inaccurate additions to the film, most agreed that Washington carried the film. Roger Ebert, a film critic for the Chicago Sun-Times, wrote, “This is one of Denzel Washington's great performances, on par with his work in Malcolm X.”

John Q stars Denzel Washington as a desperate father who holds an ER hostage after discovering his son needs a heart transplant that his insurance won't pay for. Rotten Tomatoes gave the film a 23% based on 131 reviews, and Metacritic gave the film 30 out of 100, indicating “generally unfavorable reviews.” Once again, however, Washington's ability to rise above the screenplay and make his character relatable and believable shows how incredibly good he is at what he does.

While Kevin Kline is the “star” of Cry Freedom, Denzel Washington's supporting role as African activist Steven Biko is commanding. His charisma oozes off the screen and has viewers captivated until his time in the movie is, unfortunately, cut short. Washington made such use of his role that he was nominated for an Oscar for Best Supporting Actor, though he ultimately lost that honor to Sean Connery for his role in The Untouchables.

Ezekiel “Easy” Rawlins is Denzel Washington's character in the 1995 film Devil in a Blue Dress. Based on the same-named Walter Mosley novel, many critics agree that Don Cheadle's performance in a supporting role steals many of the scenes in which he appears. However, if not for Washington's equally impassioned performance, Cheadle would not have had as much to work with from a less talented actor.

25. The Tragedy of Macbeth

Finally, one of Washington's more recent films, The Tragedy of Macbeth, deserves mention on this list. This minimalist adaptation of one of Shakespeare's most well-known plays, directed by Joel Coen, relies on Denzel Washington's demeanor and presence to make up for the lack of grand set pieces. Washington, as always, absolutely delivers. It's almost as if he needed no props or set to hold the audience captive, even though we know how the bloody, violent tale ultimately ends.

The Most Googled Credit Questions and Their Answers

Six Online Courses To Understand the World of Finance