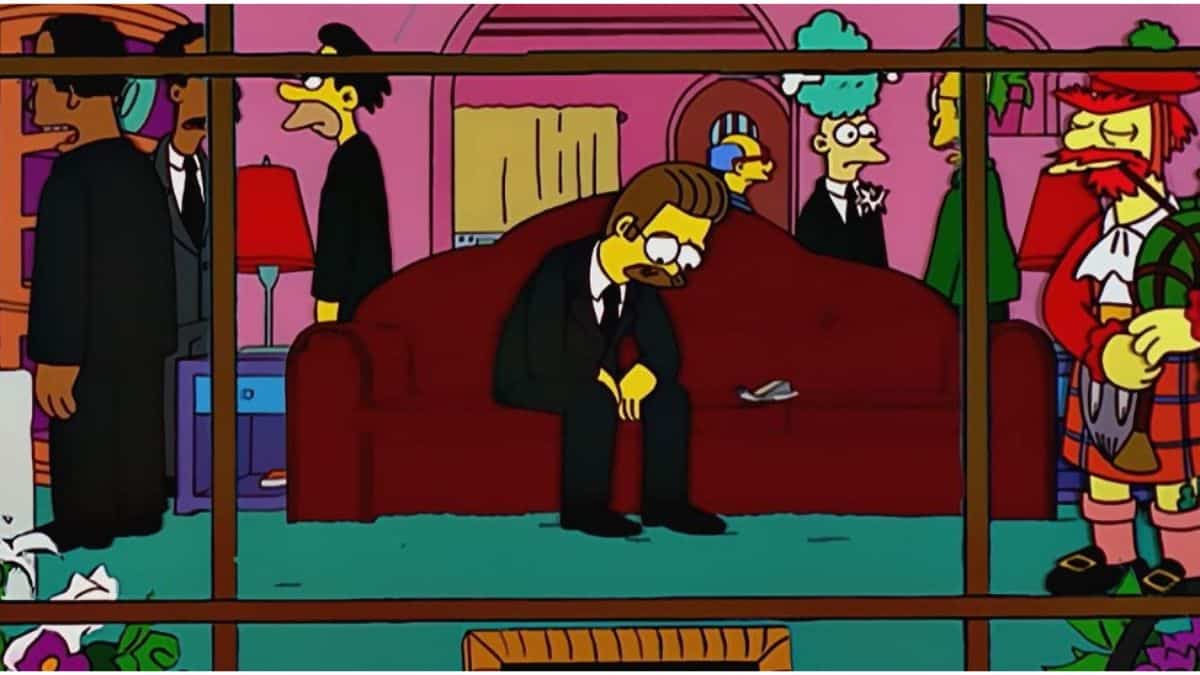 Are you a fan of The Simpsons? Or, at least, the classic seasons? Me too! Recently someone posted, “Hens love roosters; geese love ganders. So what's your favorite moment with Ned Flanders?” Here are the top-voted Ned Flander moments, according to Simpson fans.

In “Alone Again, Natura-Diddily,” the Flanders and Simpsons are at the Springfield Speedway. Maude is coming back from getting food and is hit by a barrage of T-shirts meant for Homer. She falls 20 feet to her death. Before she went to get the food, Ned's last words to his wife were, “No footlongs.” And it's the tenth top-voted Ned Flanders moment.

In “Hurricane Neddy,” Ned checks himself into a mental institution after going off on the townspeople. Ned said, “Oh, do I hear the sound of butting in? It's got to be little Lisa Simpson, Springfield's answer to a QUESTION NO ONE ASKED!” Another user added, “Flanders: You ugly, hate-filled man! Moe: Hey, hey, I may be ugly and hate-filled, but I… um, what was the third thing you said?”

Nikz07 nominated a touching moment for Simpsons fans. They said, “When Marcia Wallace passed away, they had a memory of Ned and Edna dancing. Then it comes out of the memory, and Ned says, ‘I sure do miss that laugh,' and Nelson says, ‘I miss her too.' It was a beautiful way to honor the actress.”

The Simpsons are known for their Halloween specials, and “Treehouse of Horror X” made this list. Carlosnz2022 said, “When Flanders is a werewolf, and he growls at Homer growl diddley.” “Homer's reaction to that killed me, Flanders; stop that!” Another user laughed.

GuyIncognito38 nominated, “His sigh of resignation after the mattress bounces Homer back into the burning building is an all-time classic.” This scene comes from “Homer the Heretic,” when Homer decides he's not going to church anymore. His house catches on fire, and Ned saves him.

In “Viva Ned Flanders,” a depressed Ned takes Homer's advice and goes to Las Vegas. It's the episode where Homer and Ned marry cocktail servers, starting with a night of drinking. Ned orders, a “White wine spritzer -spritzer – spritzer …”

One user quoted Flanders from the episode “Burns, Baby Burns.” They stated, “You know, most people don't know the difference between apple cider and apple juice, but I do. So now, here's a little trick to help you remember. If it's clear and yella', you've got juice there, fella. If it's tangy and brown, you're in cider town.”

3. The Trouble With Trillions S9, Episode 20

In “The Trouble With trillions,” Homer waits till the last day to file his taxes. So when Rod asks, “Daddy, what do taxes pay for?” Ned replies, “Oh, why everything! Policemen, trees, sunshine, and let's not forget about the folks who just don't feel like working. God bless 'em!”

While The Simpsons are at a ski resort, Flanders is wearing a skin-tight ski suit like an Olympic athlete. He tells Homer, “It feels like I'm wearing…Nothing at all. Nothing at all, Nothing at all,” before shaking his bum back and forth. Later Homer replays it in his mind and says, “Stupid sexy Flanders.”

It's at the end of The Simpsons episode “The Front,” “The Adventures of Ned Flanders” is a short clip added to increase the show's runtime as it was a minute short of the minimum required for broadcast.

What do you think? Did Reddit nail this list of best Ned Flander moments? Check out the best Simpsons episodes of all time.

Are Republicans Falling Out of Love With Trump for 2024?

10 Most Disappointing Horror Movies of the Last Two Decades