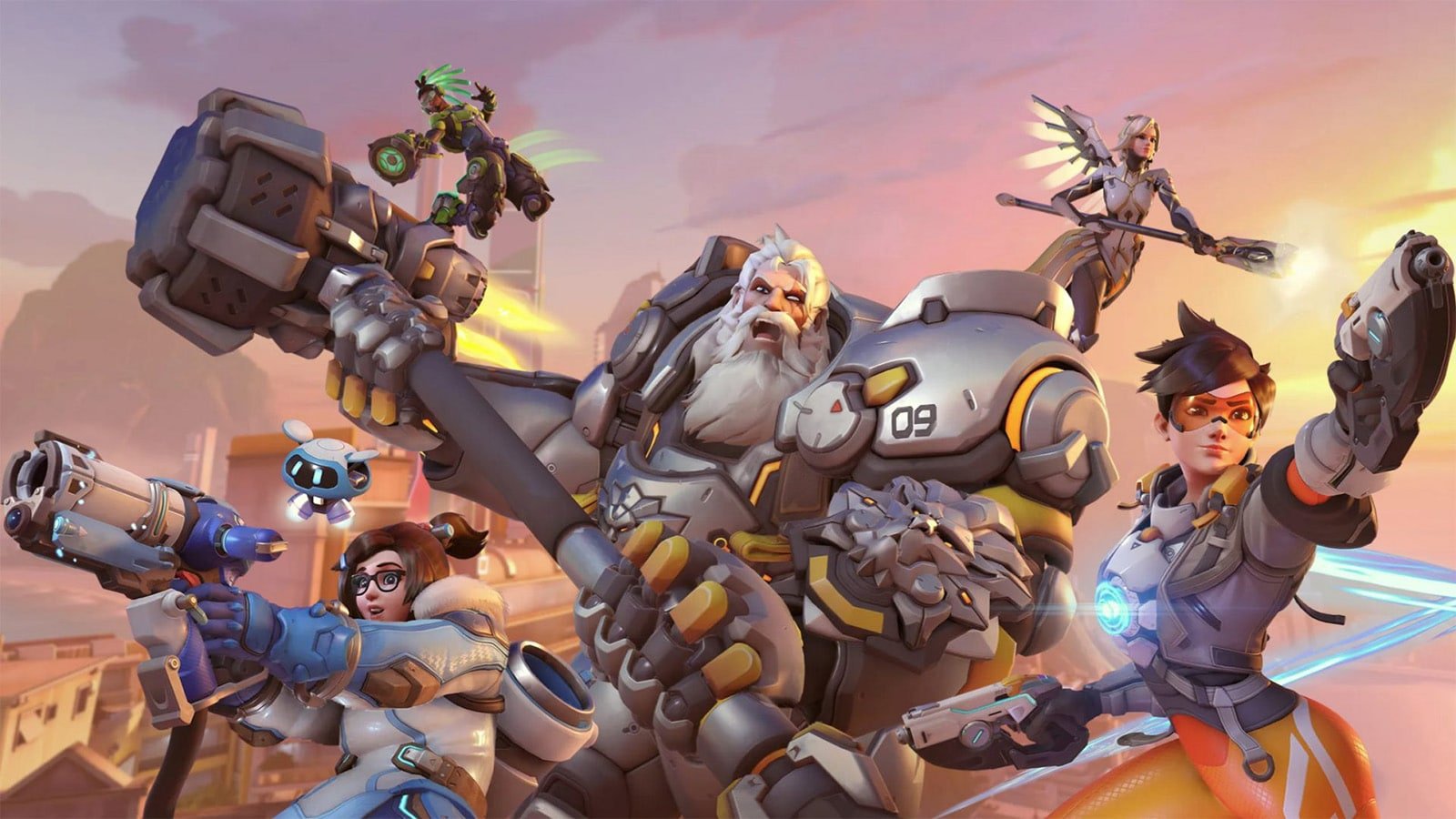 Overwatch 2 has a whopping 35 playable heroes available to players at launch. Overwatch is known for including characters that don’t feel like other First Person Shooter (FPS) games. With so many different move-sets, personalities, and uses, picking a starting character can be intimidating for new players.

Thankfully, amid all the chaos in the roster, Overwatch 2 includes several heroes that are easy to learn and teach new players the fundamentals of Overwatch. So if you’re wondering which hero to start with, look no further.

Zenyatta might be a questionable entry on this list. His primary fire is a long-range projectile that’s a little difficult to aim. On top of that, Zenyatta has a small healthpool and can be hard to master. But Zenyatta is a great support character for beginners because it forces players to consider several essential questions throughout an Overwatch match.

Who should I heal and when? Which enemy should I debuff? When should I activate my ultimate ability?

As a support character, Zenyatta’s main priority is to heal team members. Zenyatta’s Orb Of Harmony ability latches onto an ally and passively heals them as long as they’re close to Zenyatta. Alternatively, Zenyatta’s Orb Of Discord ability attaches itself to enemies and makes them vulnerable to damage.

Zenyatta’s abilities offer an interesting journey for newcomers as they decide whether to heal their tank in the center of the action or a Genji who’s applying pressure solo. The same set of decisions applies to Orb Of Harmony – do you debuff an enemy tank and quickly take them out of the action, or do you try to snipe a far-away sniper or support?

Zenyatta’s ultimate ability is probably one of the easiest ultimates to utilize but choosing when to activate it is crucial. It’s impossible to die under Zenyatta’s Transcendence, as it provides so much healing.

Reaper’s a good choice for novices since it’s hard to survive 1v1 encounters against him. His dual shotguns deal heavy damage at close range, and you don’t need to be super accurate to land shots. Tanks with high health pools will be just as vulnerable as a more flimsy support hero.

The best thing about Reaper is his Reaping ability, a passive ability that lets him regain health every time he deals damage. The Reaping makes him one of the most self-sufficient heroes in the game, not heavily reliant on support and incredibly threatening in a 1v1 situation.

Reaper’s other abilities add to his independence, allowing him to easily sneak up on foes or escape tricky encounters. However, it’s perhaps his ultimate ability that lands him so high on this list. Death Blossom sends a flurry of shotgun shells in all directions, killing any enemies within reach in seconds. It can potentially wipe out entire teams and is immensely satisfying to pull off.

Widowmaker is an easy pick for players who usually gravitate toward snipers. Widowmaker’s high-damage sniper can easily one-shot kill many enemies in the game and be a big problem for enemy support heroes.

You’ll need to have a passing knowledge of other heroes in the game since your primary focus as Widowmaker should be target prioritization. You also don’t want to choose Widowmaker if the enemy team has an effective counter like D.Va on the team.

Otherwise, snipers should feel right at home with Widowmaker. Use her grapple to reach a vantage point, camp out, and enjoy yourself.

Roadhog might not be too effective in super competitive modes, but his high endurance and one-hit kill potential make him a great tank for newcomers. Roadhog’s main allure for players is his biggest annoyance for enemies, the Chain Hook. Roadhog’s chain allows him to hook onto enemies, pull them close, and one-shot kill them with his short-ranged shotgun.

If you can land enough hooks, you’re guaranteed to earn a few eliminations as Roadhog.

Roadhog’s Take A Breather ability is just as useful, allowing him to gain ~350 health points through an inhaler. In the context of Overwatch, this is a massive amount of damage that Roadhog can mitigate. This recovery ability means that Roadhog doesn’t need to rely on any support heroes and can focus on earning kills and contesting points.

If you don’t want to focus on any complex strategies just yet, Roadhog is a great hero to learn the basics with.

Junkrat’s grenade launcher is a fantastic tool for players who aren’t super precise. The area-of-effect explosion on Junkrat’s gun means that you can deal massive damage as long as you’re close. Of course, Junkrat’s toolkit still requires that you understand the game a little bit.

If you see any chokepoints in a map (corridors that the enemy can flank through), lob a few grenades through it, and your enemies will think twice about entering.

The rest of Junkrat’s toolkit is just a lot of fun too. His bear trap can immobilize enemies and leave them vulnerable to incoming damage, and it’s a great pair with Junkrat’s other ability, the trip mine. Ultimately, Junkrat’s damage output, explosive capabilities, and funny voice lines put Junkrat firmly in B-tier.

Baptiste, Overwatch’s combat medic, will be a familiar support hero to any generic shooter fans. Baptiste’s move set and hefty rifle will make any FPS fan feel comfortable, even if you don’t fully understand how support heroes work in Overwatch.

Baptiste’s rifle is a long-ranged weapon, capable of lethal damage, but doubles as a healing tool that can shoot rounds of restorative pelts. These pelts restore much health to allies in its burst radius and can turn the tide in many fights. The rifle is a great tool for beginners since it simply reverses what many shooters teach players.

Instead of aiming to kill, you need to use all of the same skills to heal. Baptiste teaches players the role of support without sacrificing the twitch-based aiming that makes shooters so much fun.

Sojourn, one of Overwatch 2’s newest heroes, is a major threat on the battlefield. She’s fast, has incredible mobility, and can deal insane amounts of damage. She’s great for newcomers since any shooter fan can have fun with Sojourn.

Her railgun shoots automatic rounds, which then charges up a rail burst, a hyper-accurate, long-distance shot that can one-hit kill foes. Whether you’re more accustomed to automatic weapons, or precision ones, Sojourn does both.

D.Va is quite an untraditional Overwatch hero, which is saying something since every Overwatch hero is untraditional in the genre. What sets D.Va apart are her two different health pools. While she’s in her bulky mech suit, D.Va has access to a range of skills, but when she’s out of health, D.Va doesn’t die; she simply ejects. This gives D.Va a second life.

She’ll be vulnerable outside the suit since losing access to abilities and having much lower health. However, D.Va can still contribute to the fight with her light pistol and quickly charge up another mech suit to boost back into the action.

This second wind is terrific for beginners who don’t want to keep dying at the hands of more experienced players.

The rest of D.Va’s toolkit is just as great. In her mech suit, D.Va can isolate and solo kill many enemies. Her boosters allow her to fly right into opponents, knocking them away from their team and in range of your guns. She’s a versatile fighter that can soak up a lot of damage and can dish out even more damage.

Lucio is perhaps the most reliable healer at all skill levels. Lucio blasts music that can heal or speed up allies in his vicinity. Players won’t need to support their team manually; you’ll simply need to be close to your team to heal them. Lucio’s area-of-effect healing guarantees that everyone on your team stays healthy, so players at any skill level can provide decent healing as Lucio.

Lucio’s other abilities aren’t too bad, either. His wall-riding ability allows him to skate up any surface, giving players a whole other movement system to learn and master – it’s also great for evading enemy attacks.

In addition, Lucio’s soundwave allows him to push enemies back and can be utilized to push enemies off the map entirely. Overall, Lucio is easy to use, hard to master, and can make a difference in any match.

Mercy is the most straightforward support character in Overwatch. Her staff latches onto allies and provides fast, direct healing. But Mercy’s simplicity doesn’t diminish her importance on the battlefield, and she could easily be the difference between a win or a loss. Her healing speed can keep teammates alive even when they’re taking massive amounts of damage.

Mercy’s biggest strength is her Resurrection ability, allowing her to revive fallen teammates to rejoin the battle. Since Overwatch moved to 5v5 matches, every hero can make a game-changing play. So Mercy’s ability to reverse an enemy kill is vital for team skirmishes.

Essentially, Mercy is the perfect introduction to support heroes. She’ll teach new players who to prioritize first and give players an understanding of group dynamics.

Soldier 76 is easily the most traditional FPS hero in Overwatch 2, which makes him a great beginner character. First, he’s equipped with an automatic rifle that’s handy at any range. Then there’s the healing field ability that lets 76 heal himself and nearby allies, making him extremely hard to kill in some situations.

Finally, there’s his sprint ability – something every FPS player naturally tries to do. The lack of sprint in Overwatch makes it unique in the shooter space, but Soldier 76 is the one hero that Blizzard conceded to. Every FPS has trained us to sprint, and if you don’t want to end that habit now, 76 is a good hero to make the transition with.

In matches, Soldier 76 can be a deadly damage hero. 76 can easily eliminate enemies, whether they’re bulky tanks or weaker supports. His ultimate ability, Tactical Visor, will automatically aim at and kill enemies, meaning even your accuracy doesn’t need to be perfect.

Reinhardt is a classic tank hero in Overwatch 2. He’s been there since the beginning, and he’s been perfect in so many team compositions over the years. Reinhardt’s main feature is his enormous barrier that can protect the entire team from oncoming damage.

This is an excellent tool for newcomers, as it’s the simplest way to teach you about the role of tanks in Overwatch. Your job is to be a damage sponge and protect your team – going solo is a surefire way of getting your entire team eliminated.

Reinhardt’s shield is incredibly useful, but he can also land heavy damage with his giant hammer. If an enemy does get too close – or if they break your barrier – a few melee strikes can easily dispose of most enemies. Overall, Reinhardt is simple to use, but he sums up everything Overwatch is about: teamwork.