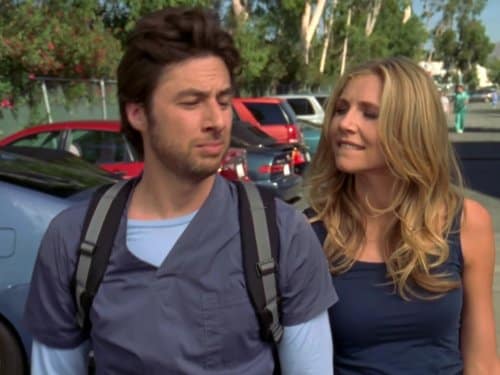 Redditor u/ankillme asked what the best scene in the entire show was before they informed us that their's was “Ted singing ‘Hey Ya' while the group is in the Bahamas and all the couples are making up.”

Here are ten more of the best moments from the television series Scrubs voted on by the r/Scrubs Reddit community.

Redditor wawig nominated “The Rabies scene with How to Save a Life.” In “My Fallen Idol,” Dr. Cox (John C. McGinley) secures organs for three of his patients. However, the organ donor had rabies, which caused Dr. Cox to lose all three unwittingly.

Another user, rohirrim_of_rohan, quoted, “He wasn't about to die, was he newbie? Could've waited another month for a kidney.” By this line, I have tears falling uncontrollably down my face.”

Scrubs is one of many TV sitcoms with the best crying moments in television history.

Redditor ksm59 stated, “It's Ted's band singing ‘Somewhere Over The Rainbow' for me.”

“My Way Home” pays tribute to the iconic film The Wizard of Oz. J.D. (Zach Braff) comes in on his day off and can't escape before Turk (Donald Faison) and Elliot(Sarah Chalke) needs his help with separate issues.

Ted's (Sam Lloyd) band sings “Somewhere Over The Rainbow” while the screen shows both Elliot and Turk resolving their issues after taking J.D.'s advice.

In “My Life in Four Cameras,” J.D. is dating Kylie (Chrystee Pharris), and Carla (Judy Reyes) is jealous of how cute their new relationship is, so she becomes romantically competitive.

Turk is freaked out but also not picking up on the hints. So when J.D. allows Kylie to beat him at arm wrestling, Turk slams Carla's arm down and screams,

Another Redditor, RoisinDubh999, quoted, “So?! Did the girl make it? Did she get her liver in time? Is that how it really ended? Let's just say that's the way I'm telling it.”

That's a direct quote from “The Princess.”  The episode follows Dr. Cox after a brutal day at work. He tells his son a bedtime fairy tale based on events at the hospital that day, and Jordan listens. Jordan (Christa Miller) is the one who poses the question.

Redditor saint-jimmy4 voted, “Turk's air band audition. I can never listen to ‘Poison’ without picturing that dance.” In “My Half-Acre,” air banding is sweeping the hospital, and Ted and the Janitor (Neil Flynn) are searching for a new member for their air band.

Turk auditions after laughing at “The Todd” (Robert Maschio) tryout.

Redditor paholmes quoted, “Where do you think we are?” Which is a reference to “My Screw Up.” They acknowledged “Masterful acting and storytelling in that scene.”

Jordan's brother Ben (Brendan Fraser) comes to town, and Dr. Cox has a mental breakdown after he dies. He talks with Ben throughout the episode, but at the end, it's revealed Ben died.

In “My Cake,” J.D.'s dad dies, and his brother Dan (Tom Cavanagh) comes to town to inform him. Dan falls into a depressive slump, but he and Dr. Cox eventually come through for J.D.

He shows up with beer and hockey jerseys and admits, “Truth be told, newbie, I'm proud of you.”

In “My Last Words,” J.D. and Turk stay with patient George Valentine (Glynn Turman) while he dies. They sneak a beer in for him after he expresses wanting to taste one before death.

In “My Advice to You,” Carla is in cleaning mode because her family is coming to town. Redditor Avatar_sokka quoted, “Carla: Turk, why is there a pancake in the silverware drawer? Turk: You mean, why is there silverware in the pancake drawer? Huhehh!”

And the number one answer for best moments in Scrubs comes from Guyver1-. He quoted J.D. talking to Dr. Cox after losing three patients in “My Fallen Idol.”

“I guess after all this time, I still think of you as like this superhero that'll help me out of any situation I'm in; I needed that. But that's my problem, you know, and I'll deal with that.

I guess I came over here to tell you how proud of you I am, not because you did the best you could for those patients, but because after 20 years of being a doctor, when things go badly, you still take it this hard. And I gotta tell you, man, I mean, that's the kind of doctor I want to be.”

50 Top Songs With the Best Beginnings

The Best Friends Moments with Chandler and Monica