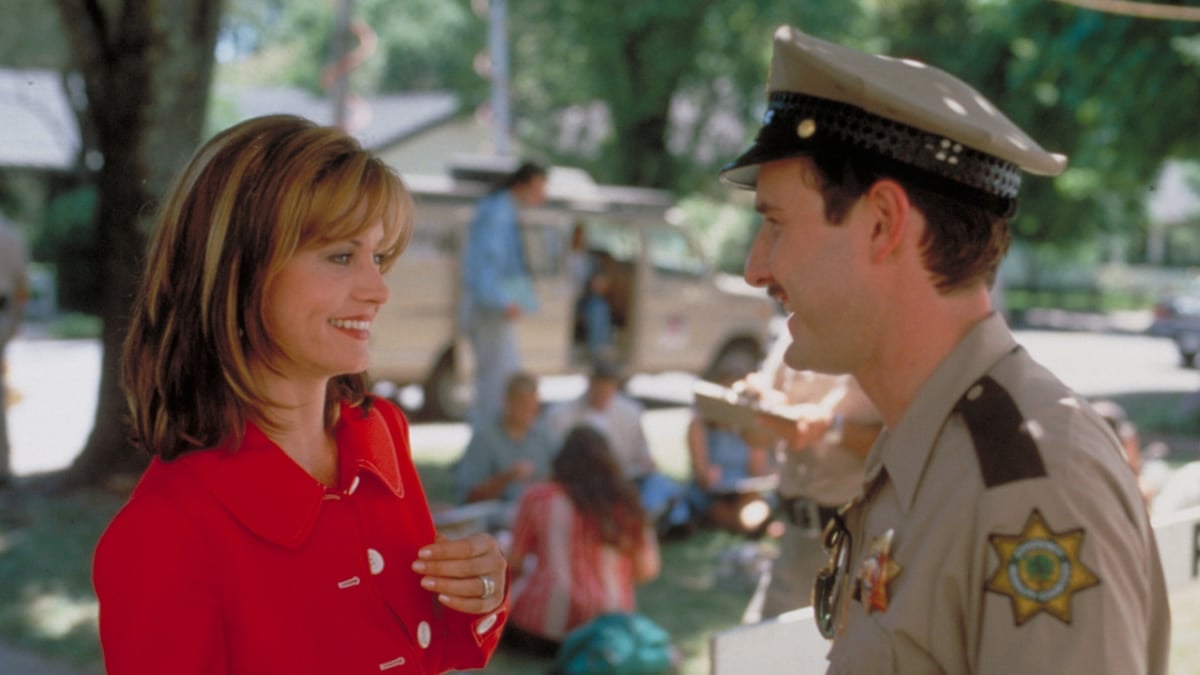 Whodunits are a staple of the mystery genre. Tense, suspenseful, and almost always engaging, they prompt the viewer to pay close attention and participate in the film’s overall narrative.

Everyone loves a good mystery, and the prospect of figuring out who a movie’s murderer might be is always appealing to our inner detective.

Decent whodunit movies are surprisingly hard to find. However, when you stumble upon a great whodunit film, you can easily find yourself sucked into the central mystery at the film’s heart.

From modern murder mysteries to adaptations of Agatha Christie’s classic novels, here are 15 of the greatest whodunit movies of all time and where they’re currently streaming.

Six people are invited to a dinner party at a remote countryside mansion. After their blackmailing host is killed, the remaining guests try to find out who killed him, using which weapon, and in what room the murder happened.

Perhaps the only good adaptation of a board game there is, Clue is a cult classic comedy starring the likes of Tim Curry, Christopher Lloyd, Madeline Kahn, Michael McKean, and Martin Mull (among others). Hilarious, original, and never boring, it’s an underrated gem of a movie that deserves its cult status today.

Anonymously hired to investigate the death of a world-famous mystery novelist (Christopher Plummer), a renowned detective (Daniel Craig) begins probing into the novelist’s toxic family to discover whether his death was accidental as it initially seems.

Another ensemble film that features notable cast members like Ana de Armas, Chris Evans, Jamie Lee Curtis, and Michael Shannon, Knives Out is the most notable whodunit film in recent years. An ambitious and modern exploration of the whodunit genre, it’s among director Rian Johnson’s best and most popular works.

A famous author (Laurence Olivier) invites his wife’s new lover (Michael Caine) to his isolated mansion for a formal meeting. Arriving there, the author challenges his romantic rival to a game — one with potentially fatal consequences for the loser.

Sleuth is an enthralling mystery film with increasingly dire stakes as the movie progresses, featuring a dramatic showdown between two of the most famous British actors ever to grace the silver screen. It’s a remarkable movie based on Peter Shaffer’s Tony Award-winning play of the same name, showing Olivier and Caine’s talents at the heights of their careers.

4. The Last of Shelia

One year after his wife is killed in a hit-and-run accident, a wealthy film producer (James Coburn) invites six of his closest friends on a Mediterranean cruise aboard his private yacht. As the cruise gets underway, the producer challenges the group to a game that reveals all of their deepest, darkest secrets.

With a fantastic script written by Anthony Perkins (star of Psycho) and Stephen Sondheim (that’s right, the Stephen Sondheim), The Last of Sheila is a well-written parlor mystery featuring an A-list cast for its day, including such talents as Coburn, James Mason, Joan Hackett, Raquel Welch, and Ian McShane.

5. Murder on the Orient Express

Traveling aboard a transcontinental luxury train halted mid-journey due to a heavy snowstorm, the famed detective Hercule Poirot (Albert Finney) interrogates his fellow passengers regarding the recent death of a wealthy American businessman (Richard Widmark).

No disrespect to Kenneth Branagh or his more recent remakes of Agatha Christie’s Poirot series, but 1974’s Murder on the Orient Express remains the definitive version of Christie’s novel.

Many actors have stepped into the role of Poirot before and after this film. Still, Finney is easily the best (as well as being the only actor to receive an Oscar nomination for his performance as everyone’s favorite mustachioed Belgian detective).

A spoof of the traditional murder mystery film, Murder by Death finds five famous detectives — many of whom are thinly-veiled versions of well-known literary figures (such as caricatures of Hercule Poirot, Sam Spade, and Miss Marple) — all trying to solve a strange mystery inside an eccentric millionaire’s mansion.

A parody of Agatha Christie-style whodunits, Murder by Death is a humorous homage to many of Christie’s best works and most popular characters. It’s a beautiful, original, and colorful exploration of the mystery genre, ideal for fans of Christie’s body of work.

Vacationing aboard an idyllic cruise ship venturing down the Nile River, Hercule Poirot (Peter Ustinov) finds his relaxing trip interrupted by the murder of a newlywed heiress (Lois Chiles).

From the Orient Express to the Nile

The sequel to 1974’s Murder on the Orient Express, Death on the Nile is another notable high point for adaptations of Christie’s famed novels. In the lead role, Ustinov gifts his version of Poirot with enough whimsy and wit to set himself apart from the dozens of other actors who’ve played the character.

It’s a clever and faithful take on the original novel and is undoubtedly one of the better films based on the Poirot series.

Sherlock, Is That You?

A parody of the Sherlock Holmes mystery series, The Private Eyes may be among the more underrated whodunits, displaying a fantastic atmospheric film that harkens back to the look and tone of classic Holmes adaptations.

It also showcases the tremendous comedic partnership between Conway and Knotts in their final on-screen pairing together.

When a young townswoman is killed after consuming poison seemingly meant for the film’s main star (Elizabeth Taylor), Miss Marple and her nephew, a Scotland Yard inspector (Edward Fox), try to find the person responsible.

Currently streaming on Prime Video and The Roku Channel (premium subscription required for both).

In a case involving a murder and a fake diamond, Hercule Poirot (Peter Ustinov) travels to a private resort on the Adriatic Sea. Finding one of the resort’s guests (Diana Rigg) strangled to death, Poirot questions the remaining resort visitors, all of whom have perfect alibis that exempt them from suspicion.

Featuring Ustinov in his second outing as Poirot following Death on the Nile, Evil Under the Sun may be a slight improvement over Death on the Nile. It’s fast-paced, scenic, and more limited in terms of its characters, allowing for a more taut mystery with plenty of twists and turns around every corner.

Currently streaming on Prime Video and The Roku Channel (premium subscription required for both).

Receiving a near-perfect play from one of his students (Christopher Reeve), a jealous, formerly successful Broadway playwright (Michael Caine) invites the student to his home with the plan to murder him and claim the play as his own.

Based on Ira Levin’s classic stage play of the same name (one of the most famous whodunits to have ever been produced), Deathtrap is famous for its ridiculously large number of plot twists and its more darkly comedic elements.

Just when you think you have some sense of where the plot might be going, the movie takes a massive narrative shift, making it near impossible to predict where the film’s going to turn next.

A group of rich and pompous aristocrats spend their weekend relaxing in a luxurious English manor in the 1930s. When the manor’s owner — a wealthy, arrogant industrialist (Michael Gambon) — passes away under suspicious circumstances, a buffoonish inspector (Stephen Fry) arrives to question the vacationing guests and the manor’s large staff.

Fry At His Best

Featuring one of the most ingenious approaches to the whodunit genre, Gosford Park is a delightful depiction of class separation and social hierarchy in pre-WW2 Britain. Directed by the legendary filmmaker Robert Altman, it’s an innovative, well-made film that feels like a stylistic precursor to Downton Abbey.

On the anniversary of her mother’s death, a teenage girl (Neve Campbell) finds herself targeted by a masked serial killer who uses famous horror movies as the inspiration for his crimes.

A deft blend between slasher and whodunit, Scream is often cited as one of the most influential horror movies of the 1990s, revamping the slasher genre and resulting in its resurgence for the next decade. One of the few horror movie franchises where the sequels are just as good as the original, the initial entry in the series remains a modern classic — and with very good reason.

Currently streaming on Paramount+ and Showtime.

In a world where cartoons and people live side by side, a famous cartoon rabbit asks for a surly private detective’s (Bob Hoskins) help in clearing his name of a murder he didn’t commit.

One of the significant highlights of Disney’s output of films in the 1980s, Who Framed Roger Rabbit is a crowning achievement in animation and live-action films.

This noir film features the likes of Mickey Mouse, Donald Duck, and Bugs Bunny. Bursting with imagination and creativity, it’s the perfect viewing option for adults and younger audience members.

Gathered on a remote island off the coast of England, a group of strangers is killed off one by one while attending a dinner party thrown by a mysterious host. Working together, they try to find the killer amongst them before it’s too late.

The One Who Started Whodunit

One of the earlier films based on Agatha Christie’s work, And Then There Were None became the prototypical film for virtually every whodunit that followed.

There’s the remote mansion setting, the unique characters with their idiosyncratic personalities, and the ensemble cast that dozens of later whodunits would adopt in the future. Several remakes of the film exist, but the original remains the best for our money.

Currently streaming on Prime Video and The Roku Channel.

The Best Noir Films Made in the Past 20 Years