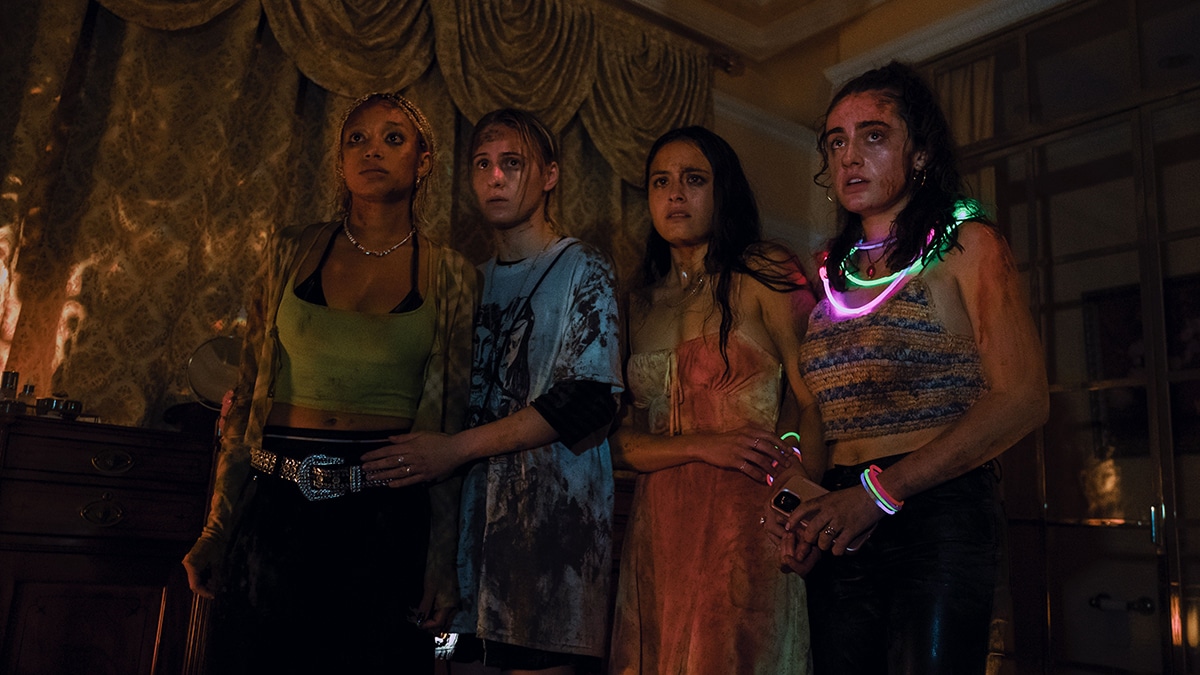 There is an illuminating exchange in Bodies Bodies Bodies when one of the young women trapped inside a house where the bodies keep piling up is so enraged by her friend's insults that she shoots her in the leg. But it's when her friends are expressing horror at what she's done is where it gets really interesting. She insists she didn't shoot her friend, despite that she had done so with full agency, and she still has the gun in her hands.

To her, this statement is not a lie. If there's one condition the rapidly dwindling numbers of young people share in Bodies Bodies Bodies, it's a need to see themselves as an underdog, and thus someone worth caring about, a trait that defines them so much it obscures other possibilities for exploration. And how does that play out after a murder mystery game designed to exacerbate their already ferocious appetite for drama leads to an actual dead body? The short answer is The Mousetrap meets Unfriended.

The longer answer involves a twist on the classic trope of people trapped in a home sans options to leave or call for help, resulting in dark truths and murderous intentions being unleashed. Bodies Bodies Bodies has pretensions of repackaging the concept to that ever elusive young audience, what with its ode to modern young love, or at least young tongue, beginning by introducing its central couple, Sophie (Amandla Stenberg) and Bee (Maria Bakalova) passionately making out as the camera films them in their unobjectified glory, proudly proclaiming allyship.

The two are en route for a literal port in the storm, a hurricane party being thrown by wealthy 20-somethings at one of the sumptuous family mansions in a remote location where that pesky other half is out of sight, out of mind, at least until Bee arrives.

Her dependence on having to work for money, along with Sophie's recent sobriety, translates to a general sense of estrangement from the group on both their parts. When a member of the said group ends up dead, the duo's solidarity is not a given.

Let's Hide Behind the Chainsaws!

Credit to Bodies Bodies Bodies for tapping into Gen Z anxieties and the usual appetite for a bloody good slasher, which feasibly eliminates not only any chance of escaping a party gone oh so wrong but all chances of connecting to any sense of sanity. One thing that needs no selling in our modern era is how all bets are off, not when the electricity goes out, but when the wifi does.

At least we can rest assured that the future of Hollywood is in pretty good hands since once the old people are taken off the board, we get to see that hot young talent front and center.

Those who only know Stenberg from The Hate U Give will relish her vulnerability as a recovering addict struggling to love and trust again under a lot of pressure, and Bakalova proving she has dramatic chops and comic ones after her breakout role as Borat's daughter.

But it's Rachel Sennott, practically fresh off her more serious turn in Shiva Baby, who steals the show in full comic relief mode as a hilariously oblivious podcaster.

Together they sell the allure of group toxicity so well that we barely question the idiocy of their decisions. These kids constantly separate, go off alone in a way that anyone with basic horror movie literacy would refuse to, and most of them barely allow a potential murder spree to hinder their cravings for Xanax or far more illicit substances.

Why wouldn't their group dynamic follow suit, with every dirty secret coming to the fore and heightening the paranoia and tension until the identity of the murderer almost seems beside the point?

The key word is almost since director Halina Reijn makes absolutely exquisite use of a claustrophobic setting robbed of just enough comfort to loom even larger in the dark while providing more than enough menace to make us all wonder what's lurking outside the relative safety of a cellphone flashlight.

But much like the shallow 20-somethings, the movie is bent on satirizing and savaging, Bodies Bodies Bodies proves wholly incapable of delving into what is separating – and potentially connecting – its talented cast, who are mostly reduced to characterizations that are as surface level as their characters' various internet personas.

We never fully realize why Bee is so reluctant to truly connect with Sophie or how class may play a part in the baffling actions of the former. Myha'la Herrold is given especially little to work with as Jordan, who is reduced to little more than a destructively jealous ball of rage.

But Sophie and Jordan's status as Black queer girls in a world that undoubtedly remains mostly white and heteronormative is fraught with a layered, barely referred to history that absolutely sizzles with indicators of a deliciously fascinating form of co-dependency. Which the movie mostly ignores in favor for the blood and gore it's by no means short on.

Maybe distrust seems like such a natural state nobody feels the need to work for it, but credit to Bodies Bodies Bodies for earning its ending, which sees its delectably dark humor and sense of nihilism to its natural conclusion. Additional depths may be absent, but who can argue with a landing that sticks so damn well?

For the latest in theaters now, follow us here.

Featured Image Courtesy of A24.

Amber Heard Controversially “Fired” From Aquaman 2, Will She Act Again?