The Harry Potter series was credited with getting a lot of reluctant readers to enjoy books, and the importance of that cannot be overstated.

However, now that most young readers are already familiar with the adventures of Harry and his friends, I suggest the following series for readers of all ages looking for something similar in tone or who are just looking for a new world to fall in love with.

Book Series To Read Instead of Harry Potter 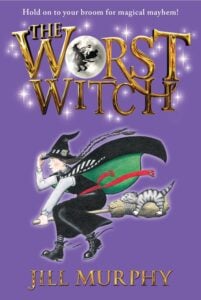 Jill Murphy's Worst Witch series might be lesser-known, but it's a natural choice for middle-grade readers looking for something similar to Harry Potter. The series follows Mildred Hubble, who attends Miss Cackle's Academy for Witches. Structurally, it's similar enough to Harry Potter that when I happened to catch an episode of the 1998 series as a child, I couldn't help but automatically draw parallels between the two.

There's also something to be said for Mildred's enduring popularity, since the first book was published in 1974, the most recent in 2018, and Netflix developed a rebooted series for it as recently as 2017.

Check out The Worst Witch series.Â 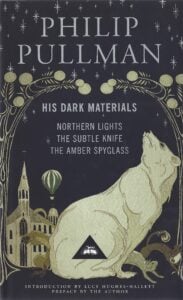 A series that hit a new level of popularity right as Harry Potter took off, Philip Pullman's His Dark Materials series is perfect for younger readers (and older readers too!) looking for something a little more serious and weighty. The story follows Lyra, a young girl living in a version of our world where every human has a daemon â€” an external manifestation of one's soul.

She uncovers a plot by the sinister Magisterium to experiment on children for purposes far beyond anything she could have imagined. The first two books were recently turned into a series for BBC/HBO, with the third book expected to be adapted. 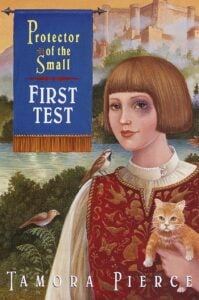 Protector of the Small

If you're above a certain age and grew up loving fantasy, then chances are you're at least familiar with Tamora Pierce, though her name doesn't get passed around much with the newer generation of readers much anymore. While I would recommend any of her books to a reader looking for a fantasy fix, the series I would most recommend to readers looking for that Harry Potter vibe is Protector of the Small.

The series follows Keladry, the first girl in the kingdom to (legally) train as a knight. The first two books especially have that fantasy academic setting, if anyone was ever curious about what it's like to balance math and history homework with dueling class.

Check out the Protector of the SmallÂ series.Â 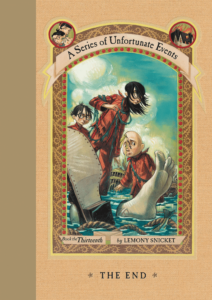 A Series of Unfortunate Events

Anecdotally, this is a series I see the children I know gravitate towards once they've completed Harry Potter. Lemony Snicket's grim, atemporal series about a trio of orphans being shuffled around from guardian to incompetent guardian is perfect for any young reader who gravitates to darker, quirkier content. The Baudelaire siblings remain solid throughout, though unafraid to get their hands dirty, and are all three compelling leads to guide readers through the darker themes of the books.

A Series of Unfortunate Events was adapted into a series by Netflix starring Neil Patrick Harris as the primary antagonist Count Olaf. It expands on the books to tie them all together even more neatly by introducing the central mystery earlier. Snicket's prequel series All the Wrong Questions is also very worth reading for readers who enjoy these books. 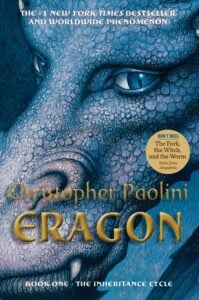 The mid-2000s saw a vast fantasy boom for young adult readers, and one of the best-known products of that boom is Christopher Paolini's Eragon. The first book was made into a movie in 2006. While the rest were never adapted, that didn't stop the series – about the titular character Eragon becoming a legendary Dragon Rider – from remaining a success through all four installments in the series. 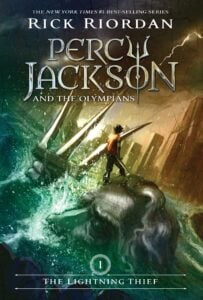 Percy Jackson and the Olympians

Percy Jackson has all the hallmarks of Harry Potter while viewing the world through a more contemporary relatable lens. It has the young boy who is special but doesn't know it, who is whisked off to a place where he will learn to harness his unique skills. Along the way, he makes unlikely friends and accidentally decides the fate of his world on more than one occasion.

It might be a little unfair to generalize that much, but when put like that, it's easy to see why a lot of kids gravitate towards Camp Half-Blood when they're done with Hogwarts. The series, along with Riordan's other two pentalogies in the Camp Half-Blood Chronicles, is also an excellent primer on Greek and Roman mythology in an accessible way, written by an author who tries to make sure underrepresented kids feel seen. 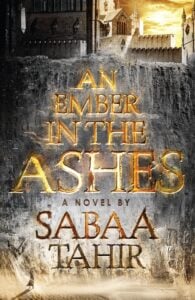 An Ember in the Ashes

Sabaa Tahir's Ember in the Ashes series – ideal for older YA readers â€” doesn't have much in common with Harry Potter, it's true. But it scratches the itch for those who grew up with stories about teenagers saving the world, fighting the system both from within and without, and how that system can sometimes break you to the point where you don't even know what it is that you're fighting or for whom.

The trio of main characters â€” Laia, Elias, and Helene – are also exceptionally well fleshed out and never quite land on the same side of anything, keeping each perspective fresh and exciting. 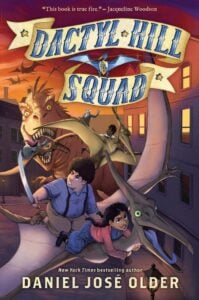 If the persistent popularity of books like the Percy Jackson series and properties like Jurassic Park tells us anything, kids like history, and kids like dinosaurs. Enter Daniel JosÃ© Older's Dactyl Hill Squad series, which asks what if there were dinosaurs during the Civil War?

The series sees Magdalys Roca and her friends learning to fly Dactyls,Â  settling into a community that appreciates them, and eventually fighting alongside the Union army. 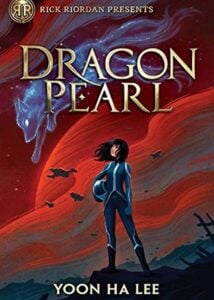 The books from Rick Riordan Presents

I acknowledge that it's deeply unfair to lump all of the books from the Rick Riordan Presents imprint under one heading, and the series under this umbrella could form a list on their own. The aim of the imprint is to publish novels by underrepresented voices that are telling “stories inspired by the mythology and folklore of their heritage.”

In an industry where too often authors try to tell stories that are not theirs to tell, the books published by Rick Riordan Presents â€” such as Roshani Chokshi's Aru Shah books, Kwame Mbalia's Tristan Strong books, or the recently optioned-for-development Sal and Gabi Break the Universe by Carlos Hernadez just to name a few â€” allows authors to tell their own stories, and for kids of all backgrounds to see themselves as the hero. 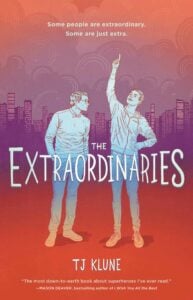 A love letter to superhero origin stories, awkward teenage love, and the not-so-subtle fanfiction we all wrote in high school. T.J. Clune's The Extraordinaries is set in Nova City, in a world where superheroes (or Extraordinaries) are extremely real. Nova City has a superhero and supervillain all their own in the form of Shadow Star and Pyro Storm.

The main character Nick longs to be one of them, not out of a desire to save the city, but to get closer to Shadow Star, on whom he has an enormous crush. His efforts, however, drive a wedge between him and his best friend Seth, who is keeping something pretty major from Nick (beyond how he may or may not feel about him). With superheroes in the mainstream now, T.J. Clune brings his voice to the genre with a funny, queer take that is nearly impossible to put down. 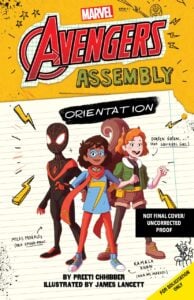 Speaking of superheroes, Marvel's Avengers Assembly series by Preeti Chhibber puts the younger of Earth's Mightiest front and center in the most dangerous of environments: middle school. As if public school wasn't rough enough, imagine a school for superhero kids.

Along with illustrator James Lancet, Chhibber brings her delightful sense of humor to this new series for middle-grade readers. It doesn't hurt that the MCU is one of the biggest properties in the world right now either, and this series is the perfect gateway to get younger fans invested. Also, graphic novels are novels. So that's that. 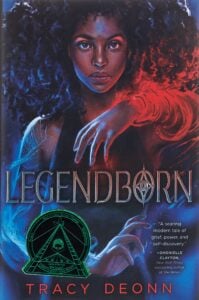 Legendborn, it is worth noting, skews much older than anything else on this list. Though the protagonist is still a teenager, she is starting college at the beginning of the book. It has the academic hijinks and the magic but in a more grown-up context.

The story of Bree Matthews, a young woman, dealing both with grief that threatens to consume her and with the Arthurian secret society she finds herself pulled into is a fantastic one that walks the line between fantasy and very grounded reality.

In any other author's hands, it would feel like discordant whiplash to go from the fantasy of King Arthur to the reality of being a Black woman in America. Still, with Tracey Deonn at the helm, the two parts of Bree's story fit together flawlessly. 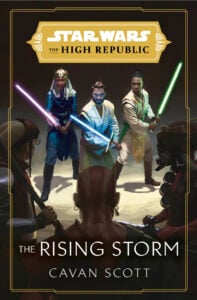 The High Republic, Lucasfilm's publishing initiative, is extremely wide-ranging, spanning books for all ages, comics, audio dramas, and manga. While a completionist like me will tell you to go and read all of it, that's not always possible, especially for younger readers. Fortunately, as of right now, each series within the initiative â€” middle grade, young adult, etc. â€” holds up fairly well as a series on its own.

So for those ready to make the leap from Harry Potter to Star Wars publishing, look no further than the middle grade and YA books within the High Republic. Each of the stories focuses on teenage characters balancing their training and the realities of growing up with huge galaxy-shaping events that threaten to upend everything they know. And with a wide range of characters from a handful of writers, there is a guaranteed favorite for every reader, no matter their personalities.

Review: ‘The Edge of Balance’ Tests the Jedi in New Ways