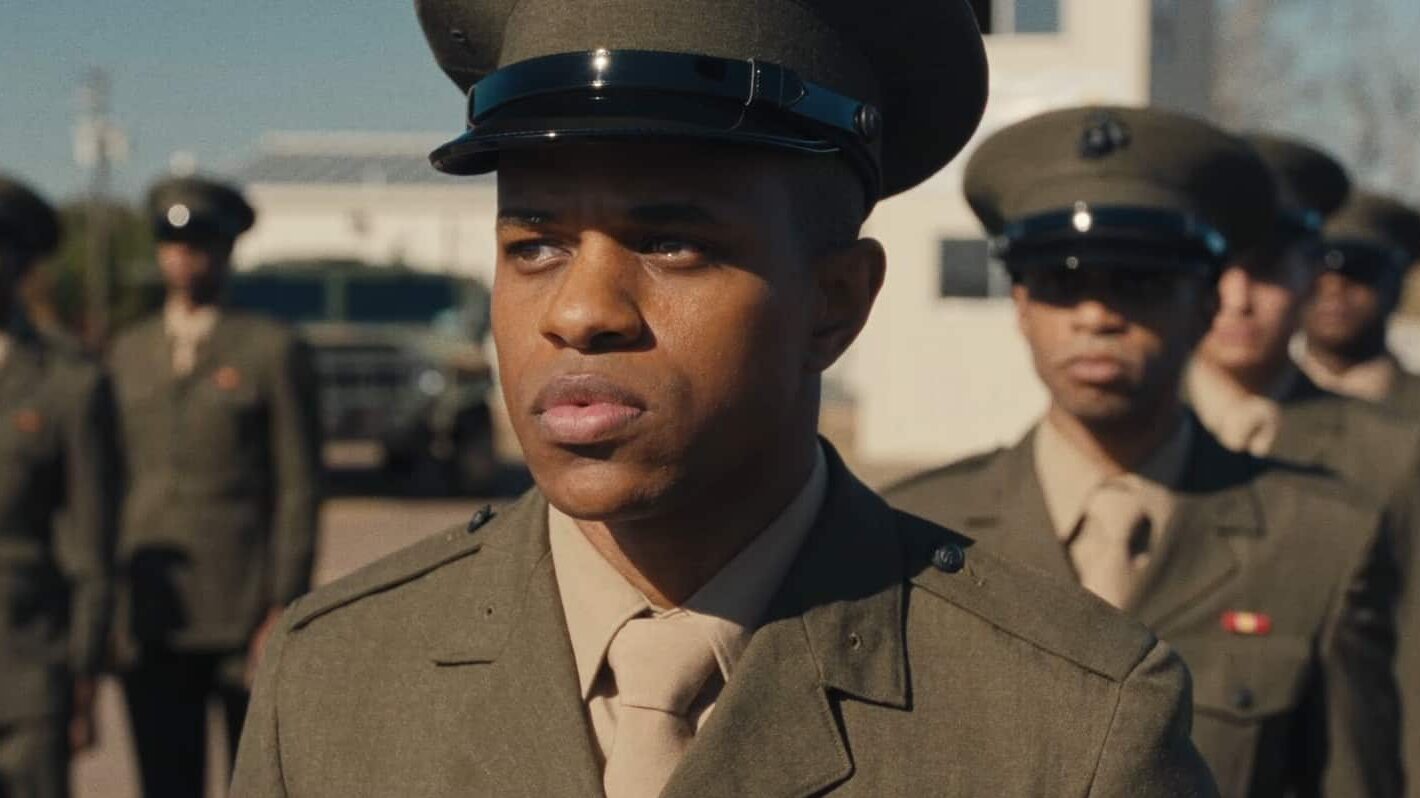 The Inspection has that “inspired by a true story” disclaimer which often doubles as an inadvertent warning for cringe.

Exceptions must be made in the case of A24 films, however, which are committed to artistic greatness, and above all, respectability.

There’s not usually this much commitment to a story like that of Ellis French, who is played with such ardent, grim sincerity by Jeremy Pope I briefly thought I'd wandered into the wrong screening. He's that convincing as the kind of guy you hope to God doesn't approach you on the subway as he attempts to just survive and navigate daily life as a homeless person with rapidly dwindling options.

If anyone besides Elegance Bratton had gotten their hands on this story, it would be a simplistic, uplifting tale of a young man who pulled himself up by his bootstraps by doing his patriotic duty. But Bratton, who both wrote and directed, actually lived much of the story he's telling, and he allows its dark complexities to unfold over his training in boot camp, a time period films typically devote a montage to.

The Inspection takes place in 2005, a time that a young Black gay homeless man joining the Marines during the height of the War on Terror and “don't ask don't tell” can expect to encounter some difficulties, to put it as lightly as possible. The vicious, violent hazing and harassment French endures after he accidentally outs himself is painful enough to watch, but when one obstacle is also his own mother Inez (an extremely unglamorous Gabrielle Union), nearly drowning thanks to a homophobic drill instructor (Bokeem Woodbine) seems almost manageable, or even forgivable.

There's also a less common trap The Inspection is intent on avoiding, that of a blanket indictment of the deeply toxic culture of the early aughts, and the hardened, black and white mentality it engendered, complete with villains who are as easily condemned as dismissed. But even Woodbine, who is about as unsettling a portrait of toxic masculinity as it gets, reveals a few surprising shades of grey that may be just enough for redemption, and not because he's another case of a self-hating closeted homophobe.

Getting to the Heart of the Story

Easy, overused routes to give depth to tortured homophobes aside, there are plenty of men in the closet in The Inspection. But their hatred is reserved mostly for themselves, not French, and they are the least dangerous men he encounters. The real obstacles are the so-called good soldiers, who believe that a trial by fire is the only way a gay man stands a chance of being a Marine, and that’s if they manage it in spite of their efforts to prevent it.

If there’s a sense of relief in The Inspection, it’s that pushback exists for what this time period represents, with its deeply embedded heteronormativity and reductionist thinking. We’re not nearly done dismantling it, and Bratton’s decision to focus on the time period in question is one that avoids easy answers, somewhat to his discredit. If he refuses to sugarcoat his motives for joining a club inherently hostile to him, its central love story can also be off-putting.

Bratton’s stand-in remains firmly devoted to the mother who threw him out of her house and remains unable to accept his sexuality, and even attempts to out him at one point. “I am never giving up on us,” French tells her. “You belong to me as much as I belong to you.”

There’s a sense of a long road to an eventual reconciliation, and trauma bonds formed under conditions that were their own boot camp, no less because Bratton dedicates the film to his own mother. But the movie refuses to deviate from the times it’s set in, leaving us to gather what we can about French’s commitment in the face of Inez’s ongoing refusals to see her son as he truly is.

Disappointments will also linger for those who expect more of an indictment of the military culture which nearly breaks French. But just as a uniform tends to cleanse men of many a sin, the crucible that soldiers must complete before they fully earn it, remains both sacred rite and an act of transcendence. Young men, and now women, find it’s one promise their superiors keep: they are broken down and made part of a brotherhood that will now fight and die for and with them.

No wonder that even French’s lowest moments are laced with the beauty of Lachlan Milne’s (Hunt for the Wilderpeople, Minari) gorgeous cinematography, which even sees drowning as an opportunity for wonder, even as it’s laced with Bratton’s elegantly framed slow-motion horror. The whole shattering picture is incomplete, but it also feels too big for one tightly focused film to put it all together.

What Non-Star Wars Films With Mark Hamill Are Worth Watching?

Personal Finance Tips for Veterans and Their Families