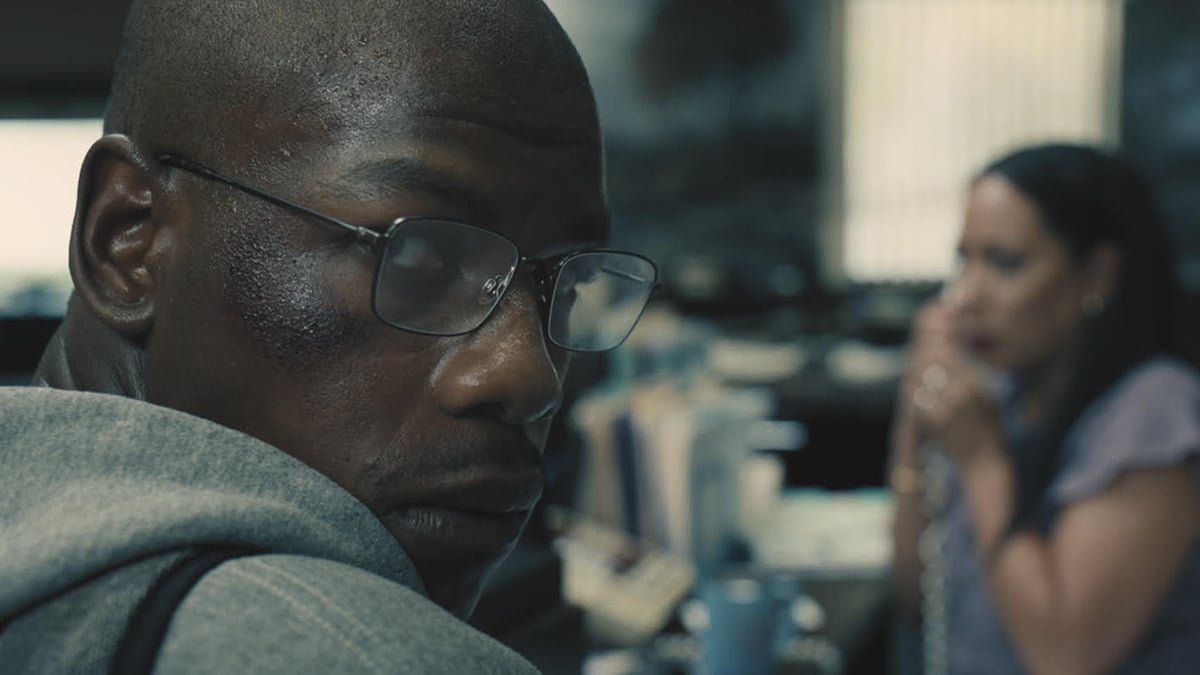 There’s a single shot in Breaking that explains much of the state of America and why it so often feels hostage to male rage. As Iraq War vet Brian Brown-Easley (John Boyega) departs Veteran Affairs after receiving none of the help he needs, the camera quietly lingers over a waiting room mostly comprised of silent men, each waiting for what they were promised after serving.

There’s a palpable sense of despair that is merely awaiting an outlet to be channeled into an exhilarating rage that relies on the classic false sense of strength, one founded on the denial of any sense of vulnerability, both in themselves and those they vent their pain onto.

But Brown-Easley makes a more compelling case than most despite the violence he threatened to unleash when he walked into a Wells Fargo Bank and held two employees hostage.

The qualifier based on a true story has become a genre unto itself and recently more of a warning for a cringeworthy, exploitative take on tragedy. But much like the life of its protagonist, Breaking strips the bank robbery genre of its glamor and bombasts for an experience far closer to Fruitvale Station than Dog Day Afternoon or even John Q.

The film’s determined simplicity isn’t extended to Brown Easley himself, who is allowed his own complexities. But, like many men whose cries for help have gone unheard, attention is part of the goal. He’s mostly uninterested in violence, or even money, saving most of his anger for the VA and demanding that his story gets out so he can reveal the many promises they’ve broken.

His desires amount to the disability check he was promised so he can avoid homelessness, the full amount of which is less than $1,000.

In other words, Brown-Easley is asking for the bare minimum, which is likely why Breaking depicts him as the unassuming middle-aged man that he apparently was. And Boyega is so far proving his commitment to avoid further entanglements with Disney as he does his damnedest to hide his natural charisma behind Easley’s spectacles and unassuming soft-spokenness.

True to the Aaron Gell article that inspired director Abi Damaris Corbin, Easley is polite to the two bank workers women he’s holding hostage, reassuring them that he will allow them to leave the building if he chooses to detonate the bomb, constantly apologizes, and takes messages from customers over the phone.

The movie’s sympathies may lie with yet another tortured man, but Corbin and her cowriter Kwame Kwei-Armah are able to build a truly damning indictment of just what drove Easley to such desperation while keeping a tight focus on the one day that would come to define his story – that of an individual who takes on a broken system the only way they know how and pay the price accordingly.

Due to the tunnel vision of its central character, Breaking somewhat neglects the people also caught up in the nightmare, including bank clerks Rosa Diaz (Selenis Leyva) and Estel Valerie (Nicole Beharie), the former embodying the fear many of us would experience in a life or death situation, and the bravery and compassion we hope we could show in the case of the latter.

Michael Kenneth Williams also made the most of what would be one of his last roles as a police officer who is well aware that Brown-Easley’s story will likely end one way and attempts to fight for a different conclusion.

Mostly, there’s a sense of weariness throughout Breaking, an exhausting sense of routine. We all know the rules of this deadly game by now and how each will play their parts, regardless of their willingness: the hostage negotiators, the media, and the police who may shoot first and debate later, if ever. But all of us know who loses, and the film’s coda reveals that Brown-Easley’s family still hasn’t received his payments.

5 Ways to Appear Smart in Your Next Job Interview