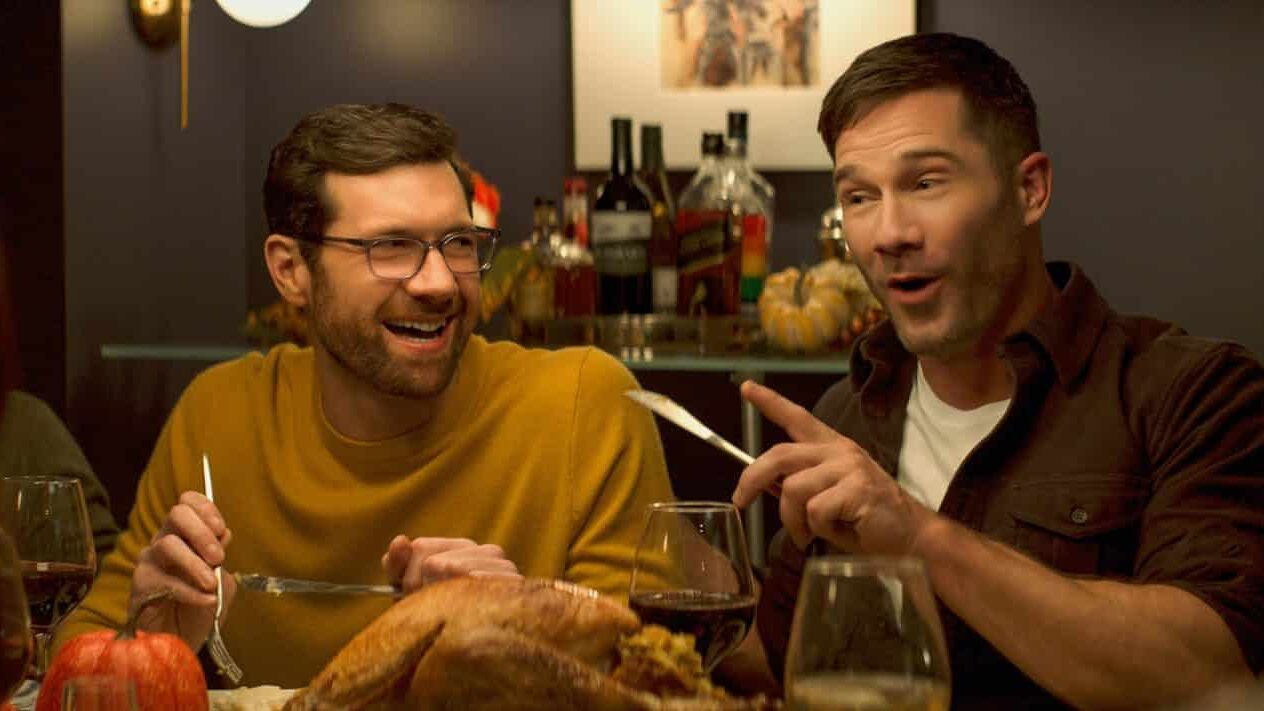 Bros begins on a meta note: star and co-writer Billy Eichner (as character Bobby) tells a story on his podcast about meeting with a big Hollywood producer to make a romantic comedy about gay men. The producer wants a movie that reiterates “love is love” and that gay people and straight people are the same, but Bobby takes issue with this. Gay men's sex lives and romances aren't the same as straight people's, and Bobby doesn't want to make a movie that perpetuates an assimilationist narrative.

The fact that Bros is a romantic comedy about gay men written by the man telling this story is impossible to miss. It's almost as if Eichner and the movie are calling their shot: this will be a movie about gay men as gay men, not a story about how every romance is the same. And while the film's narrative certainly follows the same beats we've seen for decades (if not a century), there's enough in the story to mark the movie as distinctly a story about gay men.

We've Seen This Before, but We Haven't Seen That

Bros centers on Bobby, a lonely podcaster and museum organizer, who meets the emotionally unavailable Aaron (Luke Macfarlane) at an app launch party one night. The two flirt, but Aaron repeatedly disappears (in a beautifully executed visual gag) while Bobby is still talking. When Bobby calls Aaron out on this behavior, Aaron becomes intrigued and gets Bobby's number from a mutual friend.

From there, the movie follows a standard rom-com narrative. The men court one another with some complications, encounter a significant problem at the start of the third act, and (spoiler warning?) overcome that problem. But the movie refuses to be another romantic comedy with a straight couple simply swapped out for two men.

Early on, we see Bobby flipping through Grindr and meeting up with a guy for an unsatisfying sexual encounter, and throughout the movie, there are several (surprisingly hot for a mainstream romantic comedy) sex scenes, many of which are group sex scenes. That commitment to showing gay sex, and group gay sex, in particular, shows that Bros is invested in distinguishing itself as a different love story than the ones we've seen before.

It's genuinely thrilling to see so many semi-nude male bodies entangled on screen from a major studio. Yet, the movie still feels as though it's holding back. For a film about gay men to not include a single penis is a bit surprising, and for a movie with this much gay sex to not show one is downright disappointing.

This lack of full frontal becomes more noticeable when Bobby tells a story about the positive effect of seeing a play with several nude men as a tween. It's an odd acknowledgment of the importance of this kind of nudity in a movie that refuses to show it.

The Burden of Social Responsibility

Bros isn't content to be a romantic comedy about gay men that's specifically about gay men and includes gay sex, though. It also feels the need to include conversations, monologues, and an entire subplot about queer history. Bobby works at a soon-to-be-opened museum centered on LGBTQ+ history, and several scenes show him discussing the museum with a group of other queer folks.

These scenes do a remarkable job of naturally adding other queer representations to the film without feeling like forced box checking, because they are so funny. These scenes offer familiar faces for broad audiences (Jim Rash of Community, Dot-Marie Jones of Glee) alongside some less widely known but duly celebrated within the community LGBT actors and activists (Miss Lawrence, TS Madison, and Eve Lindley). And the ensemble comedy chemistry between all of these actors is delightful. Frankly, there could have been more scenes of the museum planning committee in a movie that runs a bit too long with its generic rom-com plot.

Perhaps the irony of this subplot and the less funny and often tonally out-of-place earnest monologues on queer history is that it opens the film up to criticisms of social irresponsibility. While Bros specifically includes lesbians, trans, and bisexual characters, there are no explicitly non-binary characters.

Bobby also frequently acknowledges that he is a “cis white gay man” but has a monologue about how he has had to work twice as hard as any straight or straight passing man. That monologue shows no consideration of how hard non-cis white men have to work and instead feels like a very specific “cis white gay men have it so hard.”

But most alarming about the film's consideration of the importance of queer history (there's significant name-dropping of important figures), Bros also perpetuates a progress narrative of history. Progress narratives can be dangerous and pacifying, and this narrative is especially dangerous as LGBTQ+ rights come increasingly under fire nationally.

At Odds With Itself

Bros‘ most significant issue is precisely the commentary on gay films that opens the movie. It's a mainstream, wide-released romantic comedy that follows the formula countless other romantic comedies have followed while insisting that it isn't like other romantic comedies. Yes, the portrayal of gay men's sex lives as different from straight people's, and the inclusion of queer people of color and trans characters is significant, but at the end of the day, this is still a movie that wants to be accepted by mainstream culture.

In the name of that acceptance, Bros doesn't include things that might be seen as “too much.” Its adherence to a progress narrative allows the audience to feel as though they are succeeding in a form of allyship simply by watching the movie.

Yet, despite these significant problems, Bros is a crowd pleaser. It's a romantic comedy that is hilarious and tells a standard but not dull love story with emotional honesty from Eichner and Macfarlane (who is remarkable throughout). It's filled with cameos and jokes that will appeal to a wide variety of viewers. And while it is committed to appealing to mainstream culture, it ends on a thesis statement that “love is not love” and that gay men aren't the same as straight people, which counts for something.

And check out the latest on all the movies in theaters now!

Arkansas Marijuana Legalization Initiative’s Votes To Be Counted This November

Get Paid for Your Data With These 14 Data Collection Apps