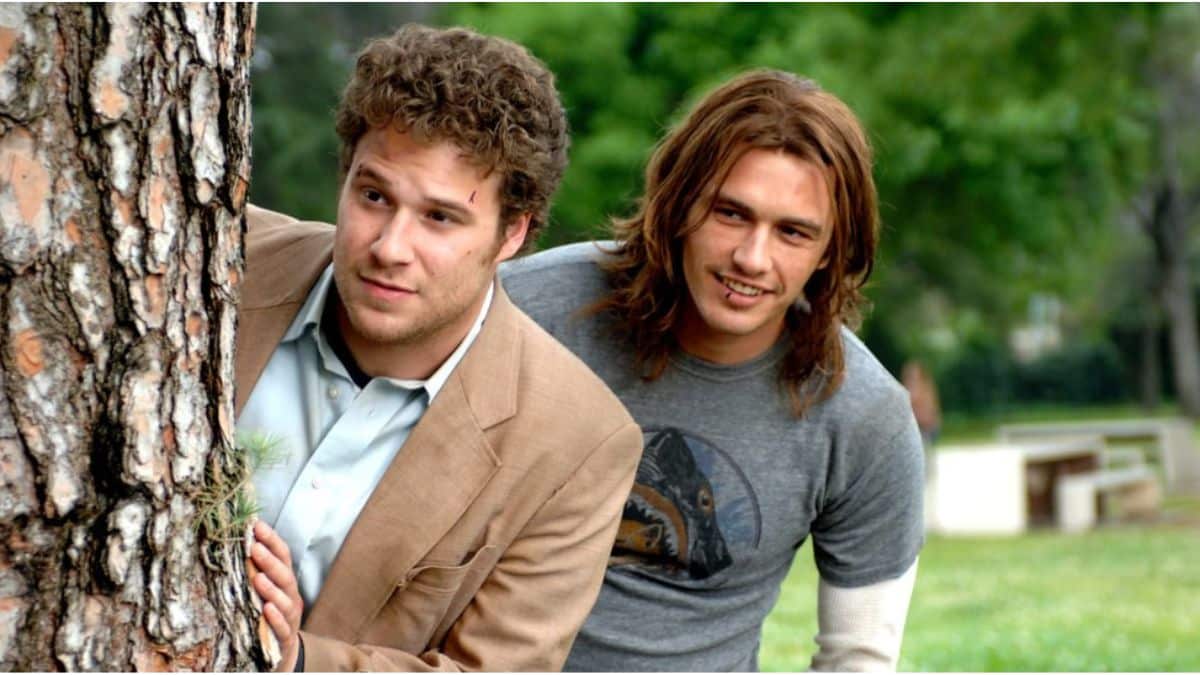 Are you a cannabis enthusiast looking for comedic relief? You're not alone. A Redditor recently asked, “What's a good comedy movie to watch while stoned?” Reddit responded to deliver this list of comedic gems.

Stepbrothers is a ridiculous premise with gut-busting laughs. It stars Will Ferrell as Brennan and John C. Reilly as Dale. Brennan and Dale both live at home with their parents. However, when their parents get married, they share a bedroom and mutually disdain each other as stepbrothers.

Eventually, Dale punches Brennan's obnoxious brother Derek (Adam Scott) in the face, and Brennan gains respect for him. Unfortunately, their parents quickly discover how worse things can get after the pair becomes best friends.

Based on the recurring Saturday Night Live sketch called “The Roxbury Guys,” A Night at the Roxbury expands on the characters hilariously getting rejected at clubs. Adult brothers Steve (Will Ferrell) and Doug (Chris Kattan) work in their father's floral shop while still living at home.

Incidentally, all they care about is getting into an exclusive club which they've been unable to do. However, after an incident with Richard Grieco, he chauffeurs them into a club, and their dreams start to come true. It co-stars Molly Shannon, and Haddaway's hit song “What Is Love” plays for a head-bobbing experience.

The Big Lebowski is a 90s black comedy classic following Jeffrey “The Dude” Lebowski (Jeff Bridges), a Los Angeles slouch and die-hard bowler. After being attacked in a case of mistaken identity, he discovers the other Lebowski (David Huddleston) is a millionaire with a kidnapped wife.

The millionaire employs The Dude to secure his wife's release by delivering the ransom. However, The Dude's buddy Walter (John Goodman) plots to keep the ransom, and things don't go according to plan.

Harold and Kumar Go To White Castle is a classic stoner buddy comedy and ideal for cannabis consumers. The premise follows Harold (John Cho) and Kumar (Kal Penn), who, after getting stoned, become captivated by a television ad for the fast food chain White Castle.

So they embark on a journey to find their desired sliders that incur many obstacles along the way. The film co-stars Neil Patrick Harris, Paula Garcés, and Ryan Reynolds.

Galaxy Quest is a sci-fi movie that parodies sci-fi series and films, notably Star Trek. It's amassed a cult following, including Star Trek fans. Many of them acknowledge it as a Star Trek film in rankings. It follows a fictional cast of characters from a television series that find themselves in an intergalactic conflict with real aliens who don't believe the series is fictional.

Instead, they think it's a documentary, and the aliens want answers. It stars Tim Allen, Sigourney Weaver, Alan Rickman, Daryl Mitchell, Sam Rockwell, and Tony Shalhoub.

However, Dean Carl Cain (Obba Babatundé) is not impressed and informs them that they must keep a 2.0 GPA to stay enrolled at Harvard. So they figure they will get high test scores if they study while high. The film is absurd but packed with laughter and quotable moments.

Austin Powers: International Man of Mystery is a spy comedy that parodies classic James Bond films. It stars Mike Myers in the titular role and as Dr. Evil. After Dr. Evil escapes in a rocket and cryogenically freezes himself, Powers volunteers to go on ice in case Dr. Evil returns in the future.

When he does, it's the 90s, and Austin and Dr.Evil need to acclimate to the significant differences in decades. It co-stars Elizabeth Hurley, Seth Green, and Robert Wagner.

Pineapple Express is the third film Judd Apatow has worked on with Seth Rogen; Knocked Up and Superbad are the others. It follows process server Dale (Seth Rogen) and cannabis dealer Saul (James Franco) flee from an assassin after Dale witnesses a murder and tosses out a roach, continuing Pineapple Express.

Because Pineapple Express is a rare strain, Saul informs Dale that the hitman can track them by it. On the run, they encounter colorful characters and deliver side-splitting laughs. It co-stars Ken Jeong, Rosie Perez, and Justin Long.

Friday is a classic 90s buddy stoner comedy with colorful characters, great music, and a couple of life lessons. It follows Craig (Ice Cube), who gets fired on his day off. And his best friend, all-day cannabis smoker, Smokey (Chris Tucker). Smokey vows to get him high because it's Friday, and he has nothing to do.

However, after Smokey convinces Craig to smoke with him, the day gets crazy right away. They find themselves indebted to Big Worm (Faizon Love), the local drug dealer, while also being harassed by the neighborhood bully, Deebo. It co-stars Regina King, Nia Long, Bernie Mac, John Witherspoon, and Tiny “Zeus” Lister Jr.

The movie is a homage to the 1930s and 1940s Universal Horror Monster films. It stars Count Dracula, Frankenstein's monster, Dr. Jekyl, and Mr. Hyde. Additionally, there are werewolves and other vampires in Transylvania.

We hope you enjoyed this Reddit pick list of funny movies for cannabis enthusiasts. Check out these comedy classics from the 90s.