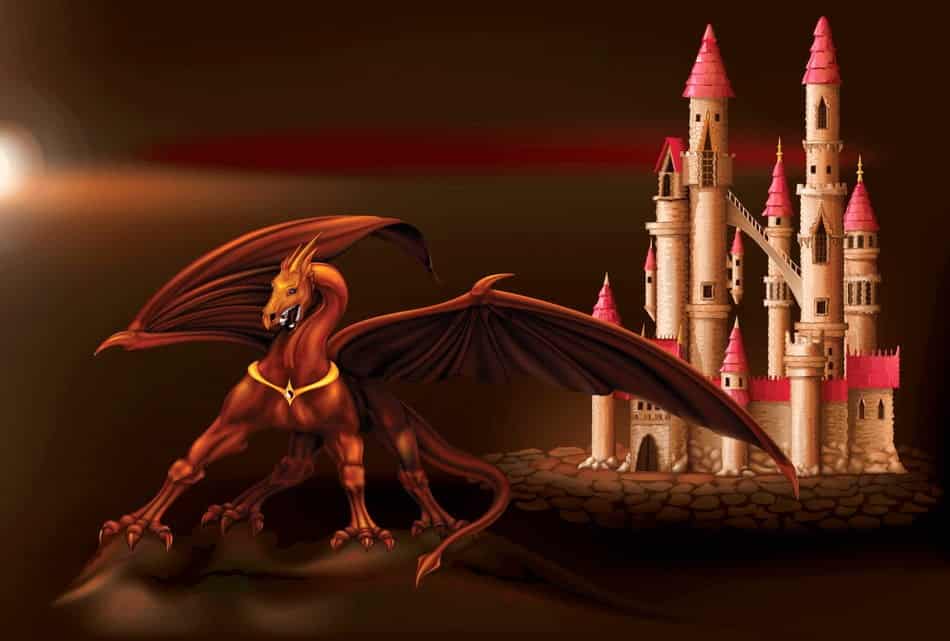 In today's review, we examine if you should take the plunge and purchase a copy.

Forged with Fire is a massive online sandbox RPG with magic spell casting, exploring, crafting, and kingdom conflict. Some might call it a mixture of “Rust and Ark” and the magical world of Harry Potter. If you're a fan of Harry Potter, you might feel the connection with the wands in the game, though you can use them to make stuff happen without chanting “expecto patronum.”

This is a game that brings innovation to the survival genre. It runs on the Unreal 4engine, and with the features we've seen so far, this is the game I'm sure a lot of people have waited for but never really knew they wanted.

The creators of Citadel, Blue Isle Studios, also recently posted an update on the steam page showcasing some of the weapon interactions, and they look pretty sweet.

About Citadel: Forged With Fire

It's a giant open-world populated by other players and AI enemies, with different landscapes throughout the map. It checks all boxes on the creativity charts. After a long, tedious tutorial that only consists of written text and no speech for some reason, you will be caught up.

Citadel: Forged with Fire offers a vast pool of materials to be crafted into gear and buildings, there are numerous creatures to be tamed, and you can team up with other players to conquer the land. Citadel: Forged with Fire is still in its early access at the time of our review.  For now, this game is nowhere to be seen on the survival genre player's radar.

The game has seen a drop in popularity online. However, Citadel's developers are still updating it on a semi-regular basis despite the game's decline, which means it's worth seeing where Citadel is now. 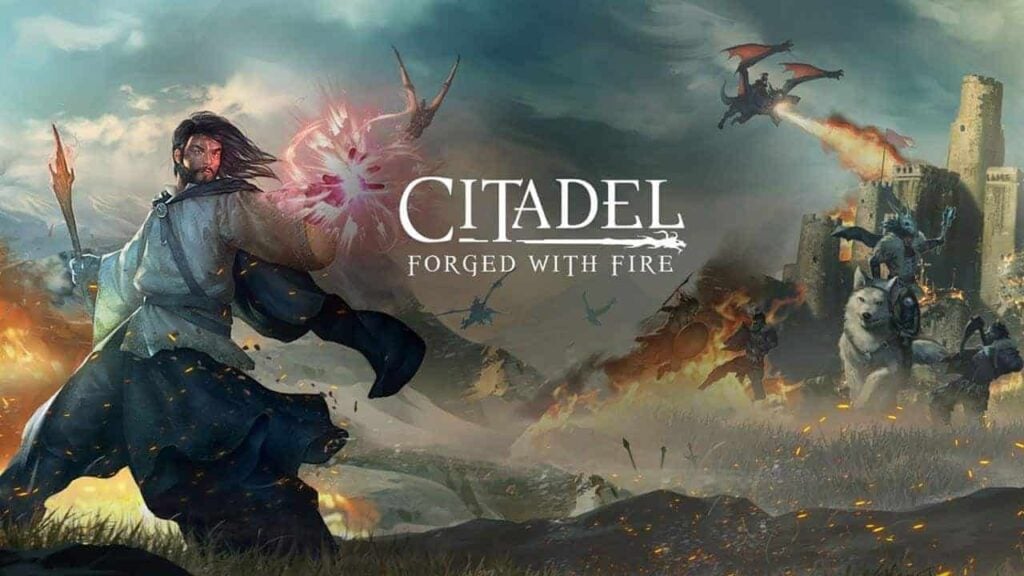 Citadel forged with fire is extremely impressive in terms of graphics; every character, every element is well designed, even the minute details like textures, lighting, and particle effects are well thought of.  If you dreamt of being a wizard so you can make stuff happen with your magic wand and fly around on your custom-crafted broomstick, Citadel forged with fire is your dream come true.

This 36-square kilometer vast world is full of diverse landscapes, scenic mountains, sweeping plains, dense forests, festering swamps, and frozen. Other than mesmerizing sceneries, this game has many creatures and characters to fight, tame, and mount, such as giant eagles, dire wolves, dragons, and much more.

Yes, there are some clipping errors, but the overall look of the game is impressive. In the early part of the game, it is incredibly addictive.

Well, there is no quest or storyline, so the main potential here is growing your gear, which is pretty fun; the building materials are in abundance, the addiction comes with finding more and more elements to unlock that piece of equipment that you want so that you could sling it over your character's body.

It will be hours before you'll realize that you got caught up in a constant loop, trying to get to the next level to unlock the next crafting recipe and then trying to find the right ingredients to build it; that is pretty much the central part of Citadel's gameplay.

The Blue Isle studio has successfully managed to give you the freedom to create your fantasy world. The best thing about this game is that it makes you feel like you are the driving force of your character's growth as opposed to depending on trading and buying items from other players.

There is a possibility of trading goods with a fellow player, but that will not help you. Even if they give you a piece of gear that you haven't unlocked yet, you still need to get to the right level to wear it anyway, so you might as well create yourself.

You can also use your Wizardly prowess to help you fly in the skies so you can cast from above and travel throughout the world. You can make up your very own style with a variety of clothing and weapon options such as magic wands and staves, magically imbued axes, swords, maces, hammers, and enchanted gauntlets. Your experience of the game depends upon your creativity and how you utilize the materials provided.

The building is the central part of Citadel’s gameplay. If you're going to invest in Citadel, it's good to keep in mind that the game overall is pretty empty in terms of features. So, at some point, going to try out the building system even if you didn't think you would eventually end up trying to build a cool-looking stuff castle and a throne to sit on.

The most satisfying moment is when you're putting the finishing touches on your new home, and the best part is that there are next to no limitations on where you're allowed to place your house. If you want to build on a high-up mountain with an insane view, go for it. If you're going to make right next to a forest that keeps your home well-hidden, you should be able to do that too. Fun right?

Despite the low system requirements, Citadel's performance: Forged with Fire is not as smooth as one could expect; Citadel will not provide you with a very polished experience at this point.

There is no arguing that the game is brilliant in the graphic department; the sceneries and character designs are just magical, but the animations of this game are stiff and jittery. You will find AI to be awful at times, and that is not because of your system; even on a workhorse or high-end systems, the game performance is a bit shaky.

However, with that being said, this game is still playable if you are not annoyed by these small jitters, and hopefully, the developer would be working on to fix that problem before release.

While there are still some indicators to keep you filled, like health and especially mana, there is no hunger and thirst factor in the game, which I found refreshing and positive addition to Citadel: Forged with Fire.

The idea of running, building, and fighting without keeping into account factors like feeding and stopping for a while to restore stamina is relatively new to the survival genre; at no point will you be searching for some mushrooms or trying to find water to survive the day.

Instead, the only thing that you will be worried about is health and mana potions because of the danger of combat with AI enemies and other players. Though the game developers are introducing new elements and capabilities, they might add hunger, thrust, and stamina as well. Still, I hope the majority of the gaming community doesn't approve of it. 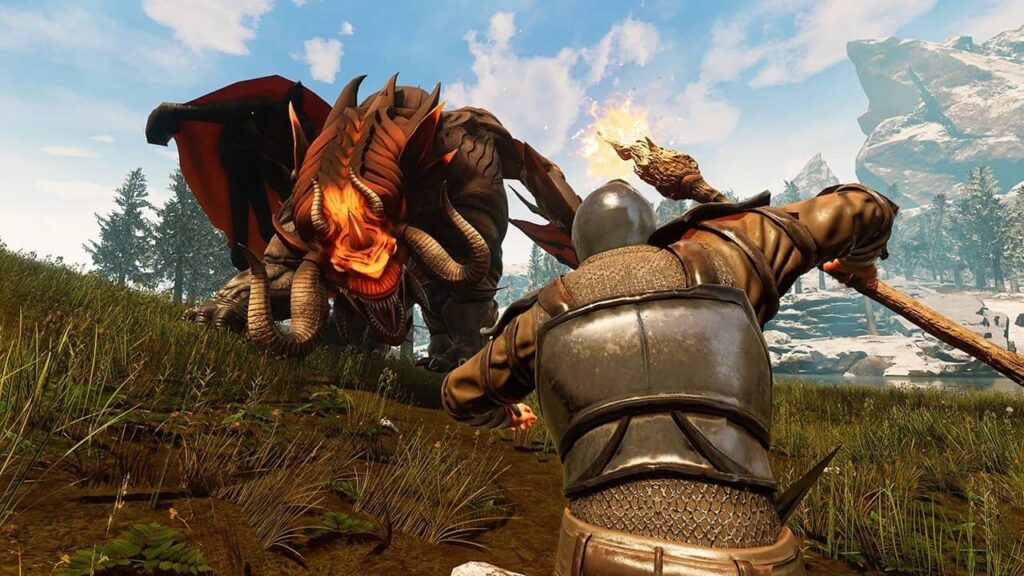 Citadel: Forged with Fire with fire doesn't bother giving you a storyline; the game has no main questline to drive any narrative; it's you and what you do with your character that will define the story for you. That doesn't mean that the game is dead; there is much more that keeps it alive. You will still have a vast pool of enemy creatures to fight with, and you can gather your team to compete in aerial competitions and dominate the world.

While playing Forged with Fire, you'll notice a lot of the castles or buildings you come across look quite similar, so it would have been nice if they added some more options, especially stuff like couches or any interior furniture that you could actually interact with so, when you go into your home after a long tiring day of building, fighting and exploring it actually feels like a home or you can go and relax and maybe sit in the throne you built for yourself.

Overall the game is refreshing for the most part, and only time will tell how it will perform when released.

My final verdict of the game is that it is incredibly addictive, but because of its repetitive nature and no main storyline, you will lose interest in it after a while. I enjoyed the gameplay and graphics, and it was refreshing to see the magic wands and broomstick in the genre of survival games.

I am not sure if I would recommend it over games like Fallout 76 or Skyrim. I know for sure that the wannabe wizards would like it a lot, so if you fancy a magical new take on online survival titles, Citadel: Forged with Fire is the game to look forward to. 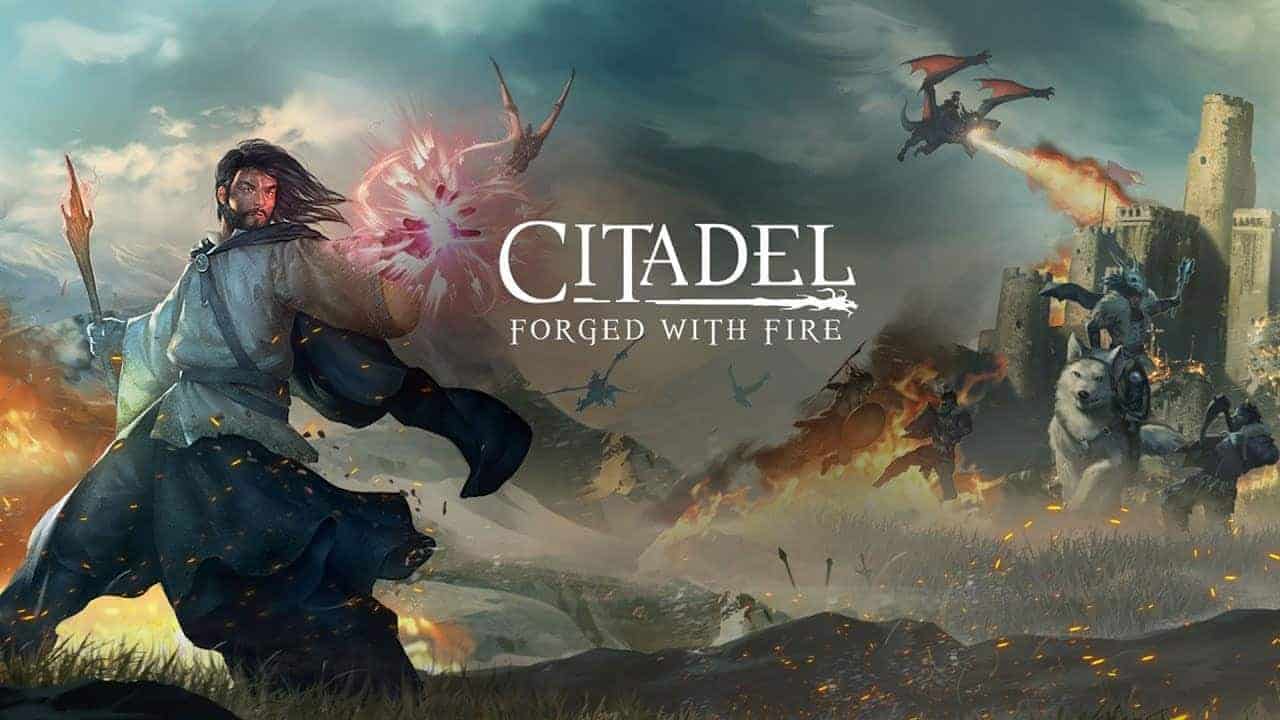