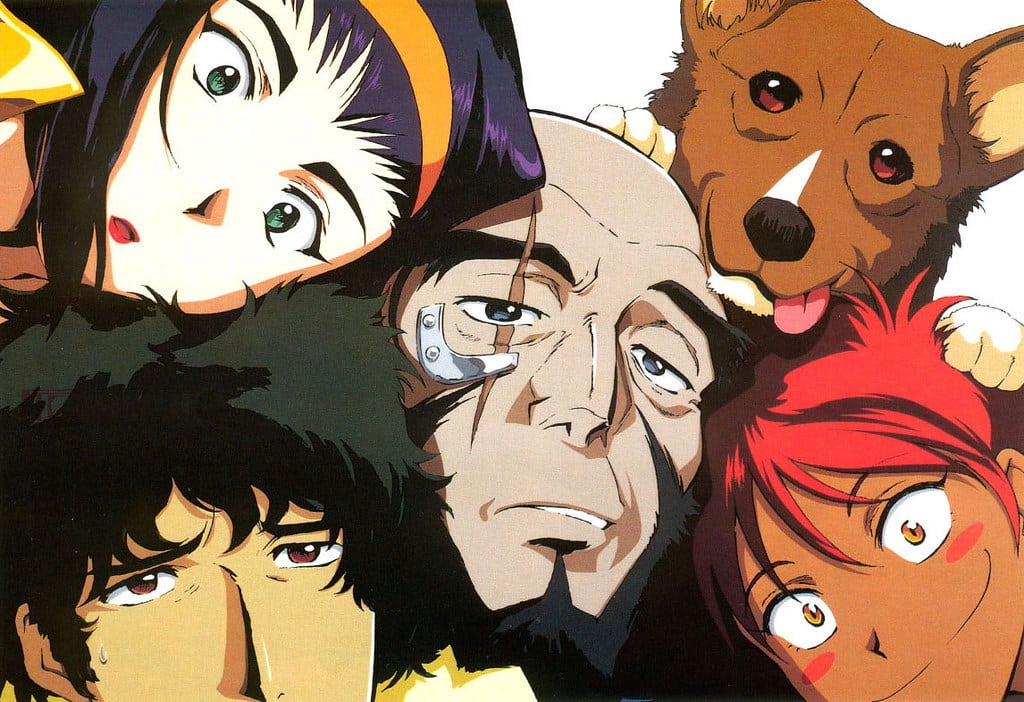 If Quentin Tarantino made a 12-hour long space-themed bounty hunter movie, it would probably look a lot like the classic 1998 anime, Cowboy Bebop.

Readers of a certain age may remember the former late-night anime curiosity-turned-classic as something that roused them to sudden consciousness if they fell asleep on a Friday or Saturday night with the TV on. So the sudden crescendo of jazzy horns to begin one of the most iconic opening credit themes ever certainly woke me on more than one occasion as a middle schooler.

Cowboy Bebop, whose original manga was written by Hajime Hatate and whose anime was directed by Shinichiro Watanabe, has long been recognized as one of the greatest anime series of all time.  Its beautiful artwork, multi-dimensional and mysterious characters, expansive universe, and semi-linear but still fully realized story have served as powerful inspiration for the next generation of creatives.

Viewers are taken on a journey that helps uncover the enigmatic pasts of the central characters while subtextually detailing a secondary storyline of humanity being scattered throughout the solar system, with Earth mostly abandoned and barely habitable.

If you've seen the recent live-action Cowboy Bebop adaptation premiering on Netflix and want more, here are some of the best episodes of the timeless anime to add to your watchlist.

The opening episodes of anime series can be a little boring.  Too much exposition, too many characters, not enough action.  Not Cowboy Bebop.  This series pushes the pace with a flurry of wild gunplay and Spike’s insane freestyle martial arts, all while preparing audiences for exactly what they’ll get throughout the series: wild adventures with a smoothly-written cast of characters who aren’t afraid to throw down in a not-so-distant future, all set to an amazing soundtrack.

The story begins with a simple tale: a small-time drug dealer, Asimov, has stolen a large stash from his former cartel to try and make a new life with his girlfriend on Mars.  The drug “Bloody Eye” gives the user an intense high along with superhuman reflexes.  Unfortunately, Asimov didn’t listen to The Notorious B.I.G. and decided to show that his drugs are the real deal by demonstrating them on himself… never get high on your own supply.  Asimov’s get-rich-quick scheme drives him right into the waiting arms of his local bounty hunter, Spike Spiegel.

What more could you want from a cold open to an anime? Guns, fistfights, crazy futuristic drugs; it’s all there as you set off into the lore of Cowboy Bebop.

The fifth installment of Cowboy Bebop is one of the most extraordinary of the series, pairing gorgeous artwork with an intense storyline and a peek into our principal figure, Spike’s past.

Until this point in the saga, the Bebop crew seemed like a loose association of interstellar drifters. Still, when Spike’s former-comrade-turned-enemy, Vicious, kidnap Faye, Spike springs into action to save her (in his own nonchalant Spike way).  The scene for the showdown between Vicious and Spike is set in an old church, so beautifully drawn that it is hard to believe that it was composed by human hands.  Bloody gunplay and fiery explosions abound in this no-holds-barred fight to the death between Spiegel and this ghost from his past.

This session starts like any other: our heroes are again devoid of money and food, looking for anything they can scrounge up to relieve their hunger.  Jet finds a refrigerator he’s never seen before in a storage room that he, apparently, rarely visits.

After a brief scene away from Jet’s discovery, the rest of the crew are startled by his yelling about what he thinks is a rat that bit him on the neck, where a strangely glowing purple mark has suddenly appeared.  The culprit is revealed to be some sort of Michael Myers-Esque space blob that doesn’t die, no matter how much you shoot it, punch it, or set it on fire, which presents Spike with a unique problem since those are his primary problem-solving methods.

I liken this episode to the Seinfeld episode, “The Parking Garage,” because basically, nothing happens.  “Toys in the Attic” has nothing to do with any other episode. It doesn’t reveal any information about anyone’s backstory. It’s just a plain old mystery and a fun, engaging palate cleanser to prepare viewers for the heavier episodes to come.

“Mushroom Samba” is a major fan favorite, and with good reason.  In search of rations to feed the starving Bebop crew after crash landing on the Jupiter moon of Io, Edward finds themselves caught between two bounty hunters, Coffee and Shaft, and their bounty, Domino Walker, a drug dealer, who is wanted for selling psychedelic mushrooms throughout the solar system.

When Domino is confronted by Shaft, who has a personal vendetta against Domino after his brother literally died laughing while tripping on Domino’s mushrooms, Domino escapes, dropping a sample of his product as he runs.  As a naïve 8-year-old would, Edward sees this as a meal for their friends, hilariously dosing and incapacitating their space-traveling companions.

What ensues is a comical romp that is such a far departure from the more serious episodes that it almost forces you to love it.  This episode also helps viewers see Edward less as a one-dimensional comic relief character and cements them as capable and integral members of the Bebop team.

This is easily one of the darkest episodes in the series.  Spike happens upon the slaughter of five Inter-Solar System Police (ISSP) officers by a gentlemanly assassin who wears a top hat and bullet-repelling tuxedo and mows down victims with a gun hidden in his cane.  Spike decides to mind his own business, but the assassin, Mad Pierrot, doesn’t allow anyone who sees his face to live.

I love this episode because it contains otherworldly surrealism that is reminiscent of earlier anime, like Katsuhiro Otomo’s 1988 classic film, Akira, that can only be truly captured through animation.  This episode also has Jet saying one of my favorite quotes of the series, “There’s nothing more pure and cruel than a child,” in reference to Pierrot’s childlike fixation and gamification of murder.

Enjoy One of the Best TV Series

The self-encapsulation of Cowboy Bebop’s adventures allows the series to effortlessly flow from super serious to heartwarming to silly nonsense, even within themselves, without any consequence to the quality of the overall project. As a result, this series has stood the test of time and is a pillar in the pantheon of anime, so much so that it has been voted #34 among the best television series of all time, according to IMDb.

Here’s hoping that the new, live-action series, starring John Cho, of Harold and Kumar Go to White Castle fame, as Spike and Mustafa Shakir, who recently played Bushmaster in the second season of Luke Cage, can properly honor the original and the creators can live up to the standard set by Hajime Hitate.

Every Pokémon Movie and Why We Love Them

Review: It’s Difficult To Love ‘Love Hard,’ but Easy to Like It

When George Bailey Looks in the Mirror, Does He See Patrick Bateman?