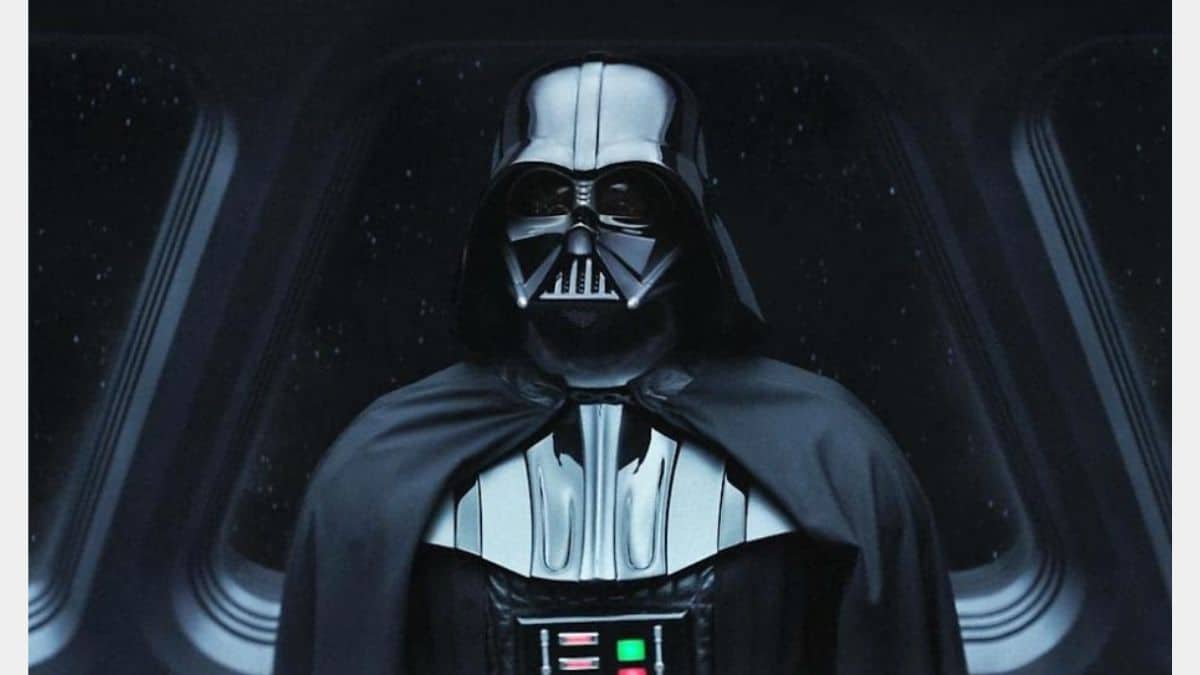 Darth Vader is one of the most famous movie villains ever to grace the silver screen. His incredible look, imposing presence, extraordinary powers, including the infamous ability to Force-choke a man, and ultimately tragic personal story have inspired critical acclaim and a place in most Star Wars fans' hearts. Here are twenty stories, facts, and myths about the most celebrated villain of all time.

The voice of Darth Vader is a cultural icon and one of the most easily recognizable sounds from cinema. However, while James Earl Jones is famed for providing the voice of Vader, the infamous breathing was not him.

Instead, Ben Burtt, the sound designer for A New Hope, is responsible for the final product. Burtt created Darth Vader's eerie breathing sounds using modified recordings of breathing in a scuba regulator.

The U.S. Patent and Trademark Office has Darth Vader's breathing sound effect listed under Non-Visual Trademark #77419252. The documentation officially describes it as “The sound of rhythmic mechanical, human breathing created by breathing through a scuba tank regulator.”

George Lucas reportedly considered Orson Welles to become the voice of the Empire's chief enforcer but feared his voice might be too recognizable. Orson Welles was well-known for voicing the 1938 radio broadcast The War of the Worlds. Additionally, he was an accredited film director, writer, and actor likely best known for the legendary Citizen Kane (1941).

People have misconstrued the pivotal line of dialogue between Darth Vader and Luke Skywalker in The Empire Strikes Back for decades. The line quoted is, “Luke, I am your father.” However, that is not what Darth Vader says.

His actual words were, “No, I am your father.” Nonetheless, ask anyone what Vader says to Skywalker in the Cloud City's central air shaft, and they will swear up and down it's the misquoted line. It's reminiscent of how Star Trek's Captain Kirk never honestly said, “Beam me up, Scotty,” but we've all heard that misquote. Crazy, right?

5. Darth Vader Has His Own Theme

Darth Vader has his own theme song composed by John Williams. Known as “The Imperial March.” They introduced his theme in The Empire Strikes Back movie and used it again in the prequels foreshadowing Anakin Skywalker's turn to the Dark Side of the Force.

Additionally, parts of “The Imperial March” highlight the sequel trilogy, Rogue One, and Star Wars shows, including The Clone Wars, Rebels, and Obi-Wan Kenobi. Of course, there are other musical gems in the franchise, but John Williams is the soul of Star Wars.

6. Less Than 45 Minutes Screen Time To Most Infamous Villain in The World

Despite having very little screen time in the story, Darth Vader is one of the most iconic villains in popular culture and one of the most notable fictional characters ever.

Have you heard the rumor that Darth Vader is named so because it means “Dark Father” in German or Dutch? You're not alone. However, it isn't true. Lucasfilm creative art manager, Phil Szostak, shared that “General Vader/Imperial Commander appears on an early-1974 list of potential character names by George Lucas.”

Additionally, “Darth Vader, a tall, grim-looking general, appears in the May 1974 The Star Wars rough draft. Also, Darth Vader is not Luke Skywalker's father until April 1, 1978, in the second draft of The Empire Strikes Back. Finally, Darth means nothing in German or Dutch. MYTH BUSTED!”

As previously stated, Darth Vader was not Luke Skywalker's father until April 1, 1978, in the second draft of The Empire Strikes Back. George Lucas hired Leigh Brackett, a science-fiction author, to help write the sequel. Initially, she'd written Luke's father appearing to him in ghost form to instruct him.

However, Lucas didn't care for this aspect and began conceiving Vader's claims to Luke's fatherhood. In the earliest drafts of The Empire Strikes Back script, Vader and Anakin are still two separate people, and Anakin is dead. Also, Luke meets Anakin's Force Ghost while training with Yoda and administers the Jedi Oath.

While Lucas has alleged he contrived this notion while writing A New Hope, there's no evidence of it until his April 1, 1978 draft of The Empire Strikes Back.

Bodybuilder David Prowse was the face of Vader in the original trilogy. According to Lucas, his six-foot-six-inch build “Brought a physicality to Darth Vader that was essential for the character. With an imposing stature and movement performance to match the intensity and undercurrent of Vader's presence.”

Renowned fencer, sword-fight trainer, and choreographer, Bob Anderson donned Darth Vader's black helmet and cape fighting in the lightsaber battles of The Empire Strikes Back and Return of the Jedi.

In Return of the Jedi, Sebastian Shaw also portrayed the Dark Lord. Shaw was an English actor, theatre director, novelist, poet, and playwright, who played the minor but critical role of a redeemed, unmasked, and dying Anakin Skywalker.

Hayden Christensen and Gene Bryant alternately portray Darth Vader in Revenge of the Sith. In addition, Christensen reprised his role as Vader in the Obi-Wan Kenobi series.

Actor and singer Brock Peters provided the voice of Darth Vader in the NPR/USC series, a radio dramatization of the original Star Wars film trilogy. Peters was best known for his roles in Porgy and Bess (1959), To Kill a Mockingbird (1962), and as Starfleet Admiral Cartwright and Joseph Sisko in the Star Trek franchise.

Nonetheless, James Earl Jones reprised his Vader vocals for Rogue One, and Daniel Naprous and Spencer Wilding alternated his physical portrayal in the film.

Darth Vader in Rogue One

C. Andrew Nelson spent more time in the Dark Lord's costume than any other actor playing Darth Vader. Andrew was Vader in the Special Edition re-release of the original trilogy. Also, in the Rebel Assault II and Dark Forces games from LucasArts. In addition, he starred in various commercials, TV shows, print, video games, and live appearances, starting in 1994.

10. The Original Vaders Wanted To Remain Uncredited in a New Hope

Arguably the most iconic embodiments of Darth Vader, James Earl Jones, and David Prowse weren't credited in A New Hope, per their request. Prowse feared the film would be a bust, so he didn't want his name attached. At the same time, James Earl Jones feared typecasting during the up-and-coming stage of his career.

11. Darth Vader Is The Master of Losing Limbs

Various Star Wars characters have lost limbs while battling forces. For example, Mace Windu beheads Jango Fett in Attack of the Clones, setting the path for Boba Fett, who witnessed the brutality.

Additionally, in Revenge of the Sith, Anakin takes off both Count Dooku's arms before beheading him per Palpatine's orders. Again Anakin takes Mace Windu's hand in the final scenes of Windu's life after Palpatine shocks him with his electricity, and Mace is about to deliver a lethal blow to the Sith Lord.

In Attack of the Clones, Anakin loses his right arm to Count Dooku. And Obi-Wan Kenobi takes his left arm and both legs in Revenge of the Sith. Then, of course, Luke Skywalker loses his right hand to Darth Vader in The Empire Strikes Back. However, Luke returns the favor by taking Vader's cybernetic hand in Return of the Jedi. Vader ties with C-3PO for limb loss counts.

12. The Darth Vader Grotesque at The Washington National Cathedral

There is a Darth Vader head sculpture on the Washington National Cathedral church building in Washington, D.C. It's part of the building's rain control system, bouncing off the top of his helmet and reflecting away from the North side of the Cathedral.

As Revenge of the Sith ended, viewers watch a devastated Vader scream, “Noooo,” after learning of his beloved Padmé Amidala's death. Palpatine smiles behind Vader's pain in the film. However, in the comics, Vader uses the Force to throw Palpatine against a wall, and Force-choke him upon discovering the tragedy.

Naturally, Palpatine uses his powers to prevent Vader from killing him and then gives him a choice to embrace the Dark Side or die. Additionally, he electrocutes Vader with Force lightning to guarantee his allegiance. Finally, Darth Vader submits to his new master while grieving Padmé.

It's a widely known fact that George Lucas admired and drew inspiration from the work of film director Akira Kurosawa and his samurai films. The Hidden Fortress (1958) is the most noteworthy similarity. So concept artist Ralph McQuarrie incorporated samurai-style armor into his 1975 conceptual designs for Vader's costume.

A layer of artificial skin constantly itches Darth Vader under his suit. The itching makes sleep nearly impossible, and he has droids scrub his skin frequently to alleviate the constant itching.

Additionally, within his suit and mask, there is a series of needles penetrating his skin. These needles transmit neurological data throughout his body, allow him to control his limbs, and, unfortunately, cause him constant pain.

Darth Vader's cape's material is Armorweave, a heavily armored cloth that can resist lightsaber strikes, dissipate the blots of blasters, and is fireproof, according to the Star Wars Wookiepedia.

Darth Vader's suit is restricting, causing him to suffer from claustrophobia. His only relief is through meditation in specially-constructed pressurized chambers that temporarily allows him to remove his suit.

George Lucas wanted the Star Wars universe to feel lived in, with the props feeling used while suggesting a sense of history. So he sent set decorator Roger Christian to scour antique dealers and thrift stores searching for the perfect pieces.

Ultimately, Christian secured 1940s Graphics Camera flash handles and modified them into the most iconic movie weapon ever. They painted them with blue and red projection materials to distinguish the Jedi from the Sith.

19. Darth Vader Didn't Have a Father

In The Phantom Menace, Anakin Skywalker's mother, Shmi Skywalker, told Qui-Gon Jinn that her son had no father. So either Anakin was conceived by the Force or by midi-chlorians, the intelligent microscopic life form in the Star Wars universe. Perhaps, it is why he has incredible powers and is The Chosen One.

Television and cinematic history has heavily referenced the Sith Lord Vader. Not surprisingly, there are far too many to list, but here are a few noteworthy pop culture references:

The diversity of these film references demonstrates how much Darth Vader impacts us all. We hope you enjoyed this list of facts, stories, and myths about the legendary Darth Vader. Also, check out these times when Star Wars is guaranteed to make you cry.

What Is a Life Coach? (And Why You Need One)