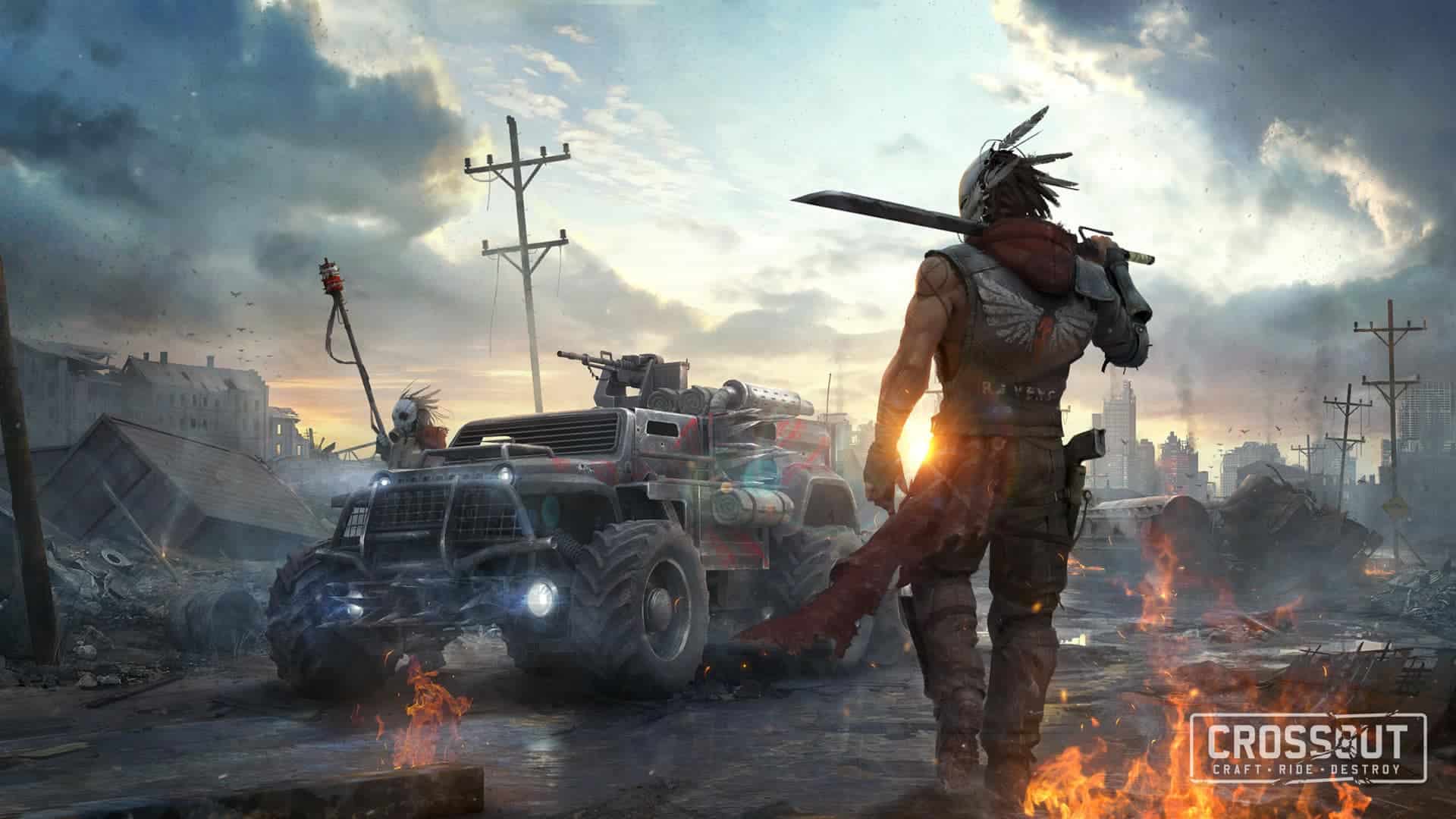 Welcome to the post-apocalyptic world of Crossout, a wild MMO developed by Targem Games and published by Gaijin Entertainment.

THIS GAME IS FUN!

Crossout is a mixture of Mad Max meets Twisted Metal from the old PlayStation 2 & 3 days. In this insane vehicular battle game, I was instantly thrown into a PvP battle against other players (or bots, I’m not sure) piloting gnarly cars, trucks, and dune buggies. 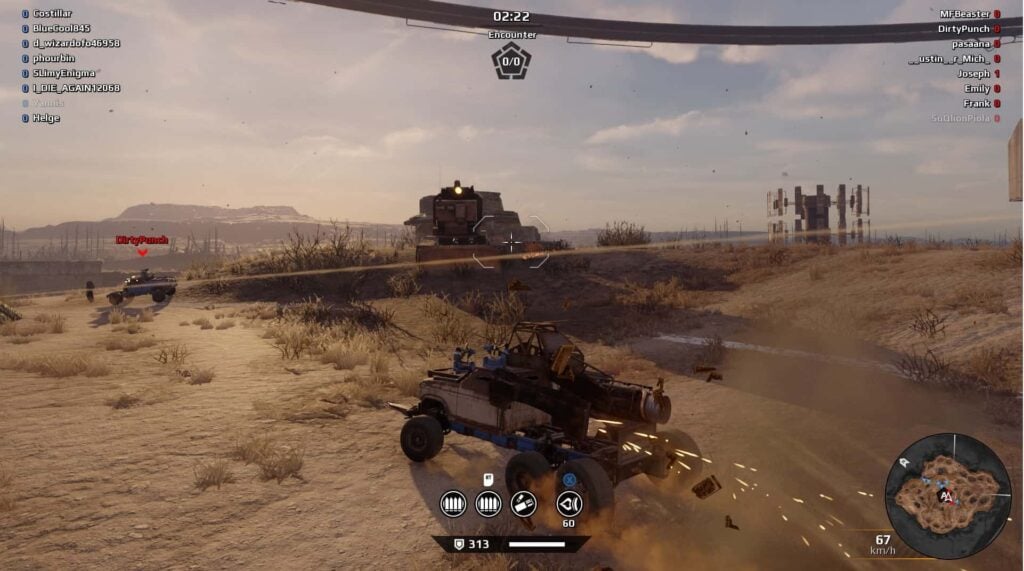 This Is an Action Mmo

First things first, if you play games on a PC (like I do), you are going to need a PDP (Xbox) controller. Wireless will cost you about $60, or you can go the wired USB route as I did and only pay about $25. I downloaded the game and, to my embarrassment, realized that a keyboard and mouse are not an option to play this game successfully.

Entering the fray, I was easily and quickly blown up twice in a row. Just call me “Captain Noobsauce” on this one. I can only imagine the laughter of the other people (or bots) I was playing against.

I put on my pants and flew out the door. I was on my way to Best Buy in two shakes of a “noob’s tail.” When I got home and plugged in my new controller, I was happy to find out that Windows 10 already had a “ready-to-go” driver to recognize it instantly. It even knew the color, Royal Purple.

There are a few controller configurations to choose from; I experimented with them in the “Test Drive” feature of the game. Once I found a setup I liked, I dove right into the carnage.

Within this high octane world, I am not only responsible for driving my vehicle and machine-gunning other players until they meet their maker, but I am also responsible for building and upgrading my automobile as I unlock new weapons, armor, engines, boosters, frames, paint, and cabins in the game.

This is the most frustrating part of Crossout. It is the most agonizing video game experience I have ever had. It might as well be Chinese algebra because whenever I selected a new part to place on my car, the highlighted piece would never match up with the rest of the car so I could place it on the frame properly.

It is a 3D grid type of system that doesn’t translate well for the player in real-time. I literally had to keep swirling the camera angles around and around to get the graphics to line up so I could build my vehicle.

One minor and humorous issue with Crossout is that some of the NPCs speak broken English. At one point, my female mentor said, “We want make warrior of you.”

My mind instantly flashed back to the year 1992, the game – Zero Wing. This game was released for the Sega Genesis and was poorly subtitled and translated. This led to the infamous internet meme- “ALL YOUR BASE ARE BELONG TO US.”

Nothing like some nostalgic memories to make Crossout even more of a fun and wild ride.

Be careful, my fellow gamers. Crossout needs a disclaimer/warning that reads like the side of prescription medication: THIS GAME MAY BE HABIT FORMING!

Except, in this case, it is OK to operate heavy machinery. (Because you are piloting a 2-ton death machine).

The fun never stops. I’m repeatedly dropped in a PvP battle with seven other teammates like rabid wolverines to destroy eight other players viciously.

It never gets old. Environments with hills and derelict structures to hide behind make Crossout a deadly-demolition-derby that only gets better and better the more I develop strategies on the various maps.

Crossout is true to the laws of physics as well. The bigger and heavier my vehicle, the slower I move and turn. When parts of vehicles are blown off, the vehicles instantly handle differently. 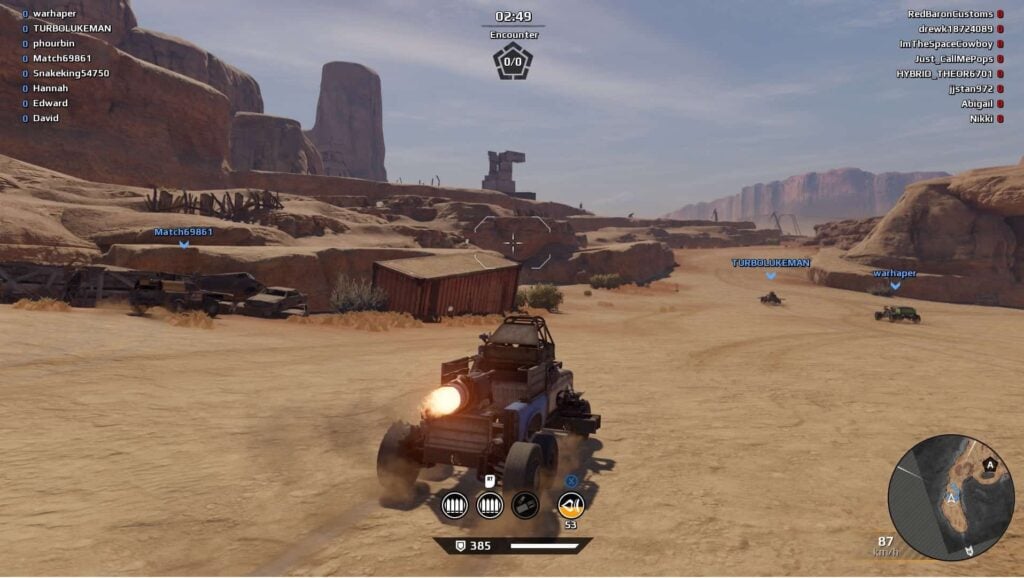 The Action Is Non-stop

Bullets and explosions engulf the battlefield as I maneuver between them and try to survive. If all else fails, I just smash into my enemy to cause the most damage I can. Don’t be intimidated by the controls in the beginning; you will be surprised at how natural they feel once you get going.

One intuitive feature of Crossout is that once the player has designed a vehicle that they really enjoy playing, they can save the template in the “Blueprint” feature.

I have a blue truck with two machines guns, a shotgun, and a rocket booster. I love this truck. I saved it as Cookie-Monster1.

The action is fluid as I drive through the chaos. Aiming and firing weapons is surprisingly simple and satisfying when it results in a kill.

However, the stakes are high, because if I’m blown to hell during the battle, I cannot respawn. From that moment on, I’m just a spectator hoping my teammates can win the battle without me.

Is Crossout Pay To Win?

Before I play and review a game, I look online to see what the community is like and how the game is being received in general. Crossout is not without its controversy.

Many a player has many a varied opinion about this game. It all stems from the inevitable “pay-to-play” feature that rears its ugly head in all MMOs.

As I play the game, I am constantly reminded and tempted to buy things with real money. However, these microtransactions are not very “micro” at all.

I mean, the prices for gear and upgrades just go up from there. Weapons, custom paint schemes, stickers and logos, armor, and various other hardware and cosmetics get pricey, fast.

This is where the controversy comes in. One complaint from the online community is that Crossout is a “pay-to-win” type of game. In other words, one must spend hundreds, if not thousands of dollars, to remain competitive and keep on winning battles.

I was shocked when I read how much money some people had spent on upgrades in Crossout. We are talking about the equivalent of a mortgage payment every month.

I’m not judging anyone. If someone wants to spend their own money to have a better gaming experience for themselves, more power to them, arguing about it online with other people, however, seems futile.

Some people have the money to spend; others don’t.

Whatever the case may be, the game is a riot whether a player spends money on upgrades or not.

Usually, when I review a game, I do a little research beforehand, play the game for a couple of hours, write about half of my article, and then take a nap. I like to sleep on it and let the game sink in a little bit.

When I wake up, I play the game for a couple more hours and finish my article-not this time. I started playing Crossout and, after three and a half hours, remembered I was supposed to write a review for it.

Yes, I was having so much fun.

I totally forgot why I was playing the game in the first place.

I suppose that is the highest compliment I can give an MMO.

I also find myself logging in and playing the game after I type each paragraph of this article. I must force myself to get back to work. I’m level 7 now. I admit I do not know what lies ahead.

From online research, it is my understanding the game doesn’t really start until I reach level 10. Perhaps this is when the controversy of the “pay-to-win” philosophy will make itself apparent.

Maybe I will have to buy expensive upgrades to remain competitive. If that is the case, I’ll just make a new login and start over because playing levels 1-10 is fun enough for me. I don’t believe that spending money will exponentially increase the fun factor of this game.

The concept is simple, and its execution is extraordinary. I have been up all night playing and reviewing this game nonstop.

I usually play MMORPGs set in a medieval fantasy world, so Crossout is a fun and refreshing break from those types of games. I encourage anyone looking for a gaming experience that is a little different to give Crossout a try.

It has a little something for everyone. Action, replayability, design, customizing, and strategy are the great features in this game. Whether you are building/making upgrades in your workshop or killing foes on the battlefield, the game is satisfying.

Having so much fun playing and reviewing a game is a welcome experience for me. Sometimes a new game can feel laborious and confusing. I reluctantly push my way through the game so that I can review it.

Not Crossout. It was just fun all the way through. Crossout is so much fun; I’m happy I remembered to put on my pants before going to Best Buy to get my PDP controller. 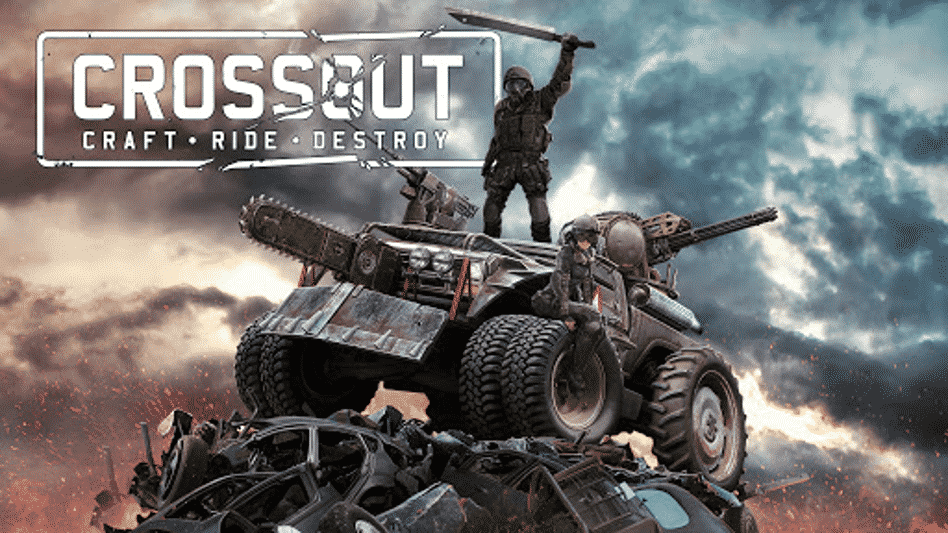