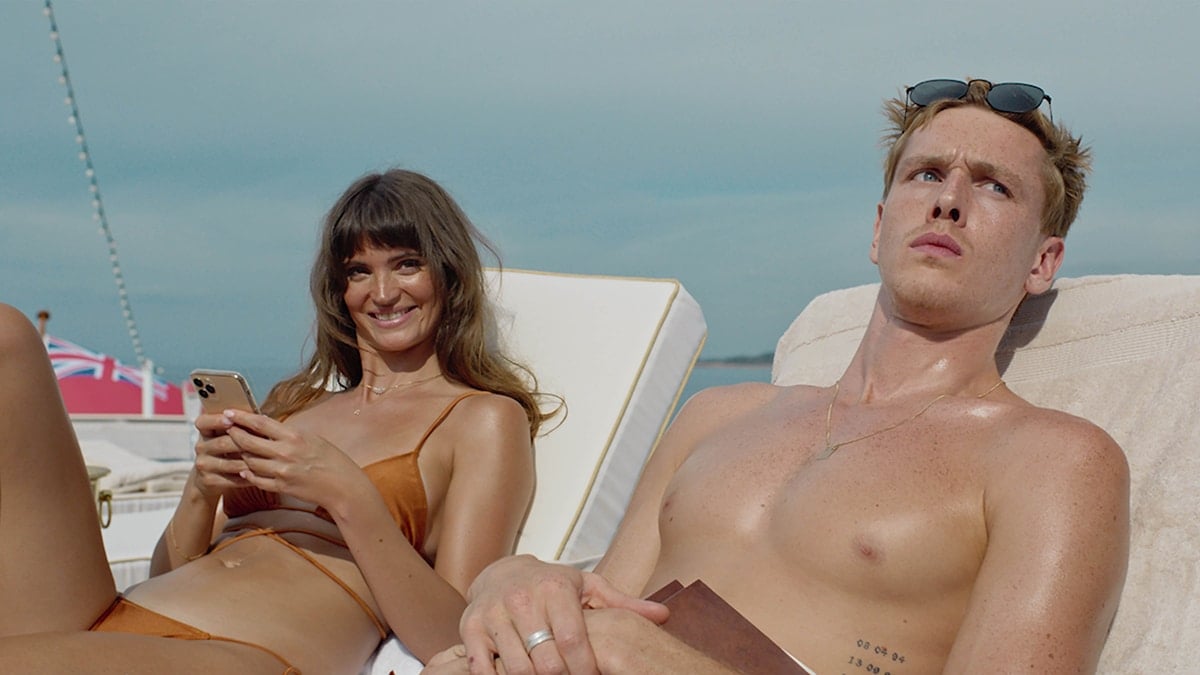 In terms of easy targets, you’d be hard-pressed to think of a better one than the fashion industry. But the utterly savage satire Triangle of Sadness has Ruben Östlund giving it a careful and critical eye, so expect the unexpected even amidst the familiar.

Östlund’s deadpan humor was used with wicked delight in his takedown of masculinity in Force Majeure, then the art world in The Square, and he’s in no mood to pull punches here. Our unwitting tour guides are two models, Carl (Harris Dickinson) and Yaya (Charlbi Dean), whose conflict stems from how unwilling they are to recognize their similarities.

Two models in a relationship will tend to want the same thing, which is to be taken care of by a more powerful force whose spending capital won’t wane once their beauty does. Yaya is the one who is able to be more honest about her desires, but Carl is supposed to be the man who provides the cash, despite women making more in their chosen profession. Their interactions are a study in the doublespeak of the industry itself, which can build an entire campaign based around equality while literally shoving its audience aside to make room for those at the top.

There’s no fiddle to play while the world is burning around them, but such small instruments would feel inadequate anyway once Carl and Yaya set sail on a cruise for the super-rich. Hell is other people, but when those people include a Russian businessman who proudly proclaims actual excrement as his source of wealth, a sweet British couple who made their fortune from weapons of war that include grenades and landmines (at least until those pesky U.N. regulations cut down on the latter’s profits), and the ship’s captain (Woody Harrelson), who leads a lifestyle as debauched as many of the passengers while proudly proclaiming his commitment to Marxism, you have to wonder if all purgatories include champagne.

These people have all the entitlement and self-awareness of pre-Revolutionary French aristocrats, and Östlund keenly exposes their vicious decadence to a disgusting degree, especially as a storm arrives to reveal the extent of the mass hubris. But it’s the third act that threatens to collapse the film as people are stripped down to essentials and Triangle attempts to get to the root of humanity’s darkness.

Filmmakers are by no means obligated to produce hope for our times, but it’s difficult to imagine how any progress is possible according to the bleak vision Östlund provides. It’s obviously meant to explore just how it came to this, but when this refuses to include our more benevolent impulses as well, the ruminations on our current state feel incomplete.

When Östlund chooses laughter and angles the camera to make the most of this approach is when Triangle works best. But its message also got a bit of an assist by a fortuitous twist of fate that would make any satirist proud, since the very first comment after my TIFF screening ended was that Queen Elizabeth had passed. And just like that, pessimism didn’t feel so out of place, given how our fascination and reverence for the wealthy and privileged seems to endure above all else.

After debuting at the Cannes Film Festival, Triangle of Sadness lands at select U.S. theaters on October 7.

Check out the latest films in theaters now.

8 Terrible 80s Movies That Are So Bad They’re Good

The New James Bond May Be Someone You Don’t Expect