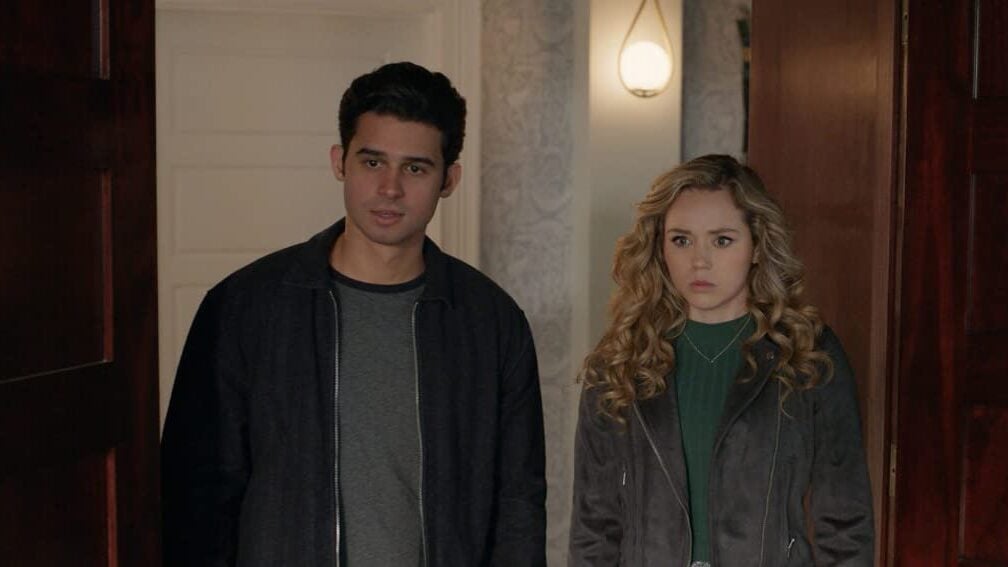 It has been hinted at a few times throughout the season that Cindy is going through a change, likely because of her father experimenting on her. DC’s Stargirl season 3 episode 6 kicks off with her eyes changing into lizard eyes, adding a bit more fuel to the fire.

Fans also see Rick using the (no longer limited) hourglass to train. After Sylvester told him that he could remove the inhibitor and have his strength past an hour (and presumably forever), Rick did just that. It is now confirmed that the hourglass strength no longer ends after an hour.

The audience isn’t the only one watching Rick though, as the screen zooms out and we see that the same mysterious person is keeping an eye on the Justice Society of America though the security cameras.

Yolanda Is Changing (Not for the Best)

At the end of the previous episode, Yolanda broke into Cindy’s home and stole The Gambler’s laptop. From the beginning of the investigation, the JSA has been saying that whoever has the laptop is clearly the killer. As the audience we have known for sometime that Cindy has it, but it still seems very unlikely that she is the killer.

Yolanda is extremely religious, so it was strange to see her do something so immoral. This fascination with exposing Cindy is turning her into a different person. She even goes to ask forgiveness at her church, full-on admitting she is not referring to what she has already done, but what she plans to do in the future.

She brings The Gambler’s laptop to a JSA meeting, where Sylvester instructs Beth to gain access to everything that is on it, and then for Yolanda to return it to where she found it. This is so that Cindy will not know it was discovered by someone, and won’t “know” she is busted.

The way he is handling this casts some suspicion on Sylvester. He is toxic for this group, even if he is trying to do the right thing (or perhaps he isn’t). He is the reason these kids are changing.

A Catfight Breaks Out

When Yolanda goes to Cindy’s to return the laptop, she is discovered. Cindy knew the laptop was gone, and tells Yolanda she knew it was her. Yolanda prepares to fight but Cindy tries to stop her, saying that she did not kill The Gambler and will explain her reasoning for taking his laptop. Yolanda however, is not willing to hear her out, and immediately attacks.

Cindy starts the fight off with purely defensive moves, however once Yolanda scratches her face and cuts off some of her hair, she changes her tactic. We see Cindy immediately heal before lunging at Yolanda and the two end up taking the fight to the lawn, where Beth can see them through the security feed now that she has access to what was on The Gambler’s laptop. We see her contact Courtney, but then Rick shows up – and he is extremely powerful thanks to the hourglass.

After knocking her over, her sleeve rips, which is when Yolanda and Rick notice her arm has green scales on it. They tell her that she is just like her dad. Courtney eventually arrives, stopping the fight in its tracks.

She gives Cindy the time to explain –something that no one else was willing to do. Cindy confesses that she started to change physically after getting back from the shadow realm. She stole The Gambler’s laptop so that she could through his files and try to find a cure and stop herself from changing.

Courtney offers help to Cindy, while telling her that she should have just been honest. This triggers Cindy who tells Rick and Yolanda that Courtney isn’t just dating Cameron, she is training him and helping him with his powers.

The JSA are furious with her, and say that she clearly chose him over them. He is a threat, and she should have shared the information she knew with the rest of them. Courtney suggests that maybe Sylvester should lead the JSA until they figure things out, and they reply that he already has been.

Courtney is spending her mornings helping Cameron to gain control of his powers. Yolanda told Sylvester, who has now let her whole family in on the secret. Pat and Barbara knew that Courtney had a crush, they were just unaware of who it was.

Now that they know it is Cameron, they are worrying. Not because of him, but because of his grandparents. They are nervous that if they know about Courtney, Mike, and the whole JSA, they could be in trouble.

In order to make a good impression, and perhaps see if there are any clues that Cameron’s grandparents do know about them, Pat and Barbara go to the house with a fruit basket. They tell them how thrilled they are that Cameron and Courtney are spending a lot of time together, and note what a nice boy Cameron is.

The conversation is a bit awkward, as the ladies tend to be a little condescending and rude to one another, but the men try to be polite. Cameron’s grandmother even gets mad at his grandfather for not trying to poison Pat and Barbara. He notes that all that matters is if the children are both happy, and she very reluctantly agrees.

As they are leaving the house, Courtney tells them that Cindy said Mrs. Mahkent has the same power that Jordan had, but if they wanted to hurt them, wouldn’t they have done it already? Pat and Barbara say they don’t know what they would be waiting for, and Pat even adds that he loves all people but the Mahkents scare him.

Another pan out and we see that the Mahkent residence is also being watched through the security camera by the mystery person, who is growling and putting a puzzle together.

The final moments of the episode reveal that Beth has discovered all of the security cameras, one of which is located inside the Whitemore/Dugan kitchen. She rushes over to tell them, turning on the juicer so that they cannot be heard. Another zoom out and we see they are being watched and the puzzle is almost complete, and resembles a skull face.

Cindy and Cameron’s parents were in the Injustice Society of America, as we all know, but this season has been all about redemption. While Cindy was once evil herself, Cameron never was. The recurring message throughout so far has been that they are not like their parents, and this episode further solidifies that.

Courtney has pretty much been the only one who is willing to give them both a chance, while everyone else is unable to look past who their parents were. Mike and Jakeem have been trying to recruit Cindy to the team they are starting, but other than that, everyone is judging them by their parents actions.

Speaking of action, fans finally got another fight in the season. The action has been few and far between in DC’s Stargirl Season 3, however the character and story development has been on point. This season is all about redemption and judging others for actions that were not their own. The drama is juicy. Eventually things are going to implode – and they are almost there.

The Top 5 Things To Do in Colorado Springs

Andor Episode 6 Is the Best One Yet