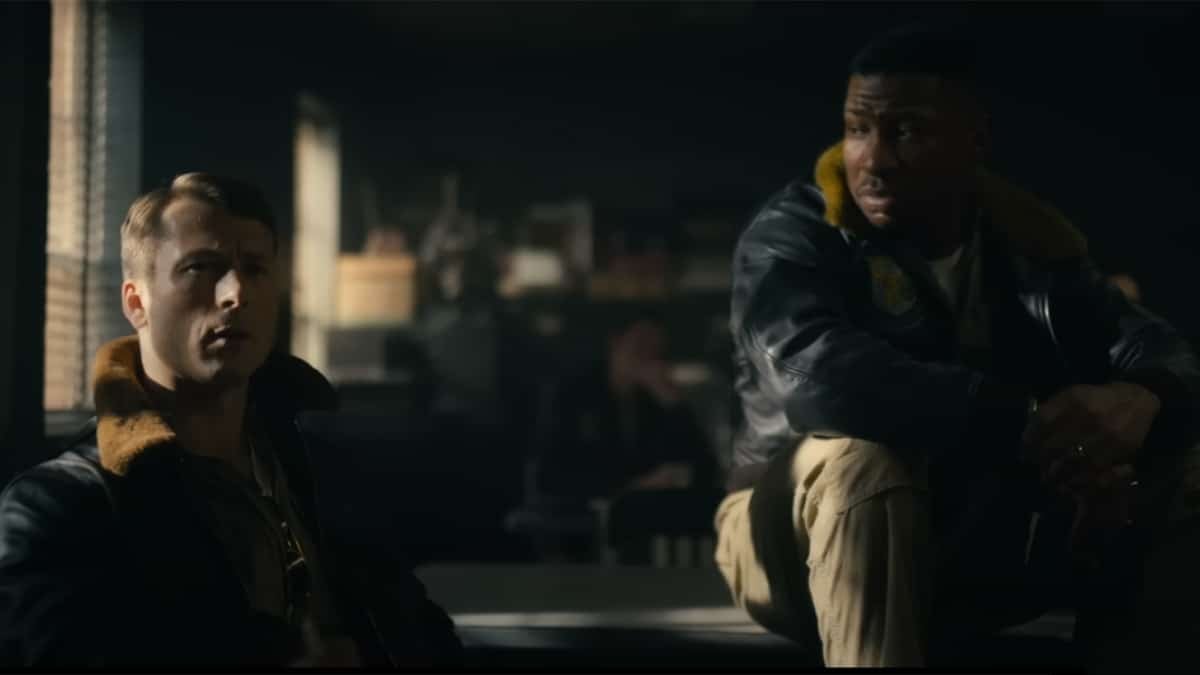 Devotion is an extremely powerful film that tells the true story of two elite U.S. Navy fighter pilots during the Korean War. Not only is it visually stunning, but it spends over two hours with these heroic men, telling their story, in a biopic that breaks the mold.

This epic film is based on the bestselling book of the same name, and it gives viewers a look into the lives of American aviator Jesse Brown (Jonathan Majors) and Lieutenant Tom Hudner (Glen Powell) – two of the Navy's most celebrated wingmen.

This movie doesn’t waste any time engulfing the audience in the aerial adventure being told. Viewers are hit with a wave of stunning cinematography as the pilots take to the sky. There are intense battle scenes as well as training sequences that take place in the air, each one more beautiful to watch than the last.

It is extremely easy to connect with the characters because of the actors that portray them. Hudner is instantly likable, as is Brown, although he is a bit more standoffish, and as we learn, this is rightfully so. The two form an unbreakable bond, which is one of the things that makes Devotion so special.

Anyone who has been in the military will tell you how much they rely on each other, and the friendships that are formed are more like a brotherhood than anything else. You have to be willing to lay your life down if you see combat, and that is exactly the type of camaraderie that exudes from the screen with the group of pilots that are part of this story.

However, it is Jesse Brown and Tom Hudner that are at the forefront of it all. Brown is the first Black aviator and that comes with a lot of condescending looks and comments. Hudner is never afraid to stand up for his friend, no matter who he needs to step to. Their bond and their friendship is inspiring and heartwarming. Majors and Powell do a wonderful job of displaying this on screen, and showing viewers what it truly means to be someone’s wingman.

Biopic movies are often hit or miss. But Devotion does a great job of sucking viewers into the story and keeping things interesting. The drama, battles, and lessons learned – even the everyday life events – play out on screen in a way that keeps everyone entertained.

If you didn’t know this is a biopic film, you would have no idea until they tell you at the end with an update on the real Jesse Brown. This man deserves to be remembered. He deserves to be honored. And that is exactly what Jonathan Majors and this story does for him. Even those who know nothing about this man are sure to be inspired by him, and will want to thank him for his service.

Majors brings a realness to Brown that will allow everyone watching to connect with him in one way or another. Whether we use what awful things others have said to us to inspire us to do better and prove them wrong, we have a dream that we will do just about anything to achieve, or we just want to be treated like a human being – there is something in him that everyone can relate to.

Biopics are often synonymous with boring, due to the real-life historical events that they tell. Devotion breaks the mold as it is a cut above the rest, and something truly special.

Devotion tells the emotional story of two men who became more like brothers during the Korean War. They were esteemed U.S. Navy aviators who showed braveness in the face of fear. Their friendship is one for the record books, and Majors and Powell helped to bring that to the screen in a way that is plain to see. The supporting cast does a phenomenal job in adding what they can to the story as well, but this is clearly meant to honor Jesse Brown – and it does.

Not only is this a powerful film, it is absolutely gorgeous as well. The scenes that take place in the air takes viewers on a journey and makes them feel like they are right there with the pilots. The aerial scenes are stunning, as the cinematography and directing choices are spot on.

Even though it is just over two hours long, it never really feels its length. That said, some scenes could have been cut or shortened to keep it under the two hour mark – but it wasn’t necessary. Yes, this is a war movie, but it is so much more than that. Devotion is moving and intense, but also often funny and heartwarming. The actors’ performances take this biopic to a whole new level, allowing the audience to fully connect with the characters.

Devotion comes to theaters on November 23rd and it deserves to be seen on the biggest screen possible. Just be sure to bring some tissues with you.

Essential Thanksgiving Movies and Where to Stream Them