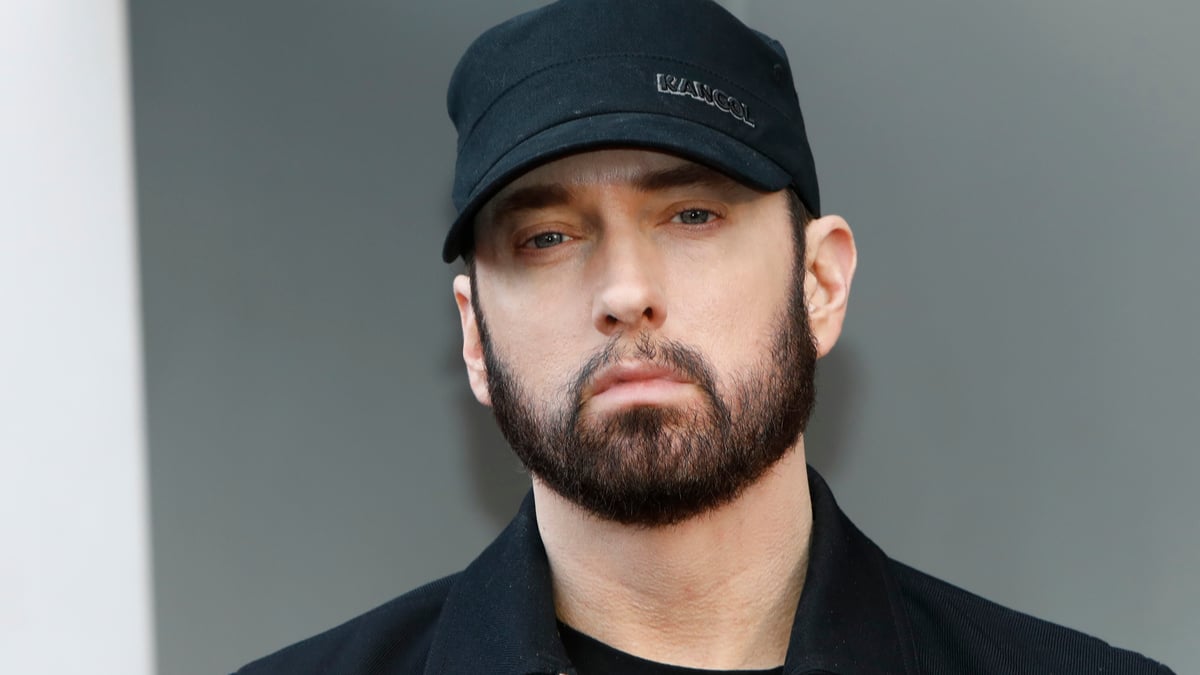 Marshall Bruce Mathers III was born in 1972 in St. Joseph, Missouri. You probably know him better by his stage name, Eminem, and he's a rapper, songwriter, record producer, and occasional actor.

He's the only child of Marshall Bruce Mathers Jr. and Deborah Rae “Debbie” (née Nelson). His father would later have two more children, Michael and Sarah, and his mother would have another son, Nathan “Nate” Kane Samara.

Before his parents split up, they were in a band called Daddy Warbucks, playing in Ramada Inns along the Dakotas-Montana border, which undoubtedly contributed to Eminem's musical nature.

Eminem regularly moved between Detroit and Missouri with his mother as a child. They rarely stayed in one house for more than a couple of years and tended to live with other family members. Their residencies included St. Joseph, Savannah, and Kansas City in Missouri.

Their most prolonged spell in one place was spent in a working-class, primarily black, Detroit neighborhood. They were one of just three white households on their block, and young Eminem took beatings from groups of black youths on several occasions.

Before discovering hip hop, Eminem was interested in storytelling and wanted to become a comic book artist. However, after hearing his first rap track (“Reckless,” featuring Ice-T) on the Breakin' soundtrack, he became interested in rapping himself.

He started rapping at 14 with his high school pal Mike Ruby, and they adopted the names “Manix” and “M&M” (which later became “Eminem”).

He attended Lincoln High School but would sneak into neighboring Osborn High School with his friend and fellow rapper Proof for lunchroom freestyle rap battles.

Eminem worked regular jobs to help his mother pay the bills – one at Little Caesar's Pizza in Warren, Michigan. But his mother would often throw him out of the house and steal his entire paycheck. When she used the money to play bingo, he would blast the stereo and write songs while she was out.

He and Proof attended open mic contests at the Hip-Hop Shop on West 7 Mile Road, which was considered “ground zero” for the Detroit rap scene. He found himself appreciated by underground hip-hop audiences, having struggled to be taken seriously in a predominantly black industry.

When he first started trying to make it big in 1988, he went by the stage name MC Double M, formed his first group New Jacks, and made a self-titled demo tape with DJ Butter Fingers.

It wasn't until 1997 when he developed the Slim Shady persona – a violent alter ego – that he started attracting real attention. He placed second in the Rap Olympics, and an Interscope Records intern in attendance called Dean Geistlinger asked for a copy of The Slim Shady EP (his first EP). It was sent to the company's CEO Jimmy Lovine, who played it for Dr. Dre, and the rest is history.

What Is Eminem's Net Worth?

According to Celebrity Net Worth, Eminem's net worth is around $230 million. That puts him on par with Benny Anderssen, John K. Delaney, and the late David Bowie.

How Did Eminem Earn His Net Worth?

Of course, the bulk of Eminem's wealth comes from his work in the music industry, but he has done many other things. Let's take a look.

Eminem has released 11 studio albums, two compilation albums, two collaborative albums, one EP (the previously mentioned The Slim Shady EP), 56 singles as a lead artist, and nine promotional tracks. He's also featured on 22 hits as a guest artist and entered the charts with more than 90 other songs.

He has sold over 220 million records worldwide and is one of the best-selling music artists ever.

According to RIAA, he's sold 154 million certified albums and singles in the United States. He has earned 50 platinum album certifications and 10 number-one albums.

His first compilation album, 2005's Curtain Call: The Hits, reached number one. His second, 2022's Curtain Call 2, has just been released and is sure to perform well in the charts.

The singles he's appeared on as a featured artist have also been wildly successful. Artists whose tracks he's featured on include Dr. Dre, Akon, Drake, Lil Wayne, 50 Cent, and Busta Rhymes.

In late 1999, following the massive success of The Slim Shady LP, Interscope offered him his own label. Along with Paul Rosenberg, he founded Shady Records in late 1999.

While the label has had some struggles, it's been largely successful. Current acts signed to Shady include Eminem, Bad Meets Evil, Westside Boogie, and Grip. Acts previously signed to the label include D12, 50 Cent, Obie Trice, Stat Quo, Bobby Creekwater, Cashis, Slaughterhouse, Yelawolf, Griselda, Westside Gunn, and Conway the Machine.

Eminem has also dabbled in the acting world, making his debut as an extra in the 1998 Korn music video for “Got the Life.”

He had a small role in the 2001 movie The Wash before making his Hollywood debut in the semi-autobiographical 2002 movie 8 Mile.

He also had cameos in 2009's Funny People and 2014's The Interview, and he appeared in the 2010 episode of Entourage called “Lose Yourself.”

Eminem has published two books. The first, 2000's Angry Blonde, is a non-fiction book featuring a commentary of several of his songs. The second, 2008's The Way I Am, is his autobiography.

In 2021, Eminem and Union Joints opened a spaghetti restaurant, Mom's Spaghetti (a reference to lyrics in “Lose Yourself”), at 2131 Woodward Ave in Detroit. It had been a pop-up in Detroit in 2017 and at Coachella in 2018.

In 2011, during the primetime ad breaks of Super Bowl XLV, Eminem appeared in two commercials. The first was as a claymation figure in a one-minute spot for Lipton's Brisk iced tea. The second was a two-minute ad – the longest in Super Bowl history until that point – for the Chrysler 200. In the ad, Eminem drives through Detroit to his show at the Fox Theatre with “Lose Yourself” playing.

How Does Eminem Spend His Money?

Eminem is a massive star with the money to live wherever he pleases. Still, he'll always remain loyal to Detroit.

He owned a lavish mansion in the city that was 17,500 square feet, then later purchased one in the Rochester Hills area, which sits on 15,000 square feet. It cost him $5 million and has nine bedrooms with ensuites, an expansive tennis court, a waterfall pool, and a huge guest house.

Eminem's other loves include expensive Rolex watches and comic books. To emphasize how much he loves comic books, it's worth noting that one item in his extensive collection – a mint-condition Amazing Fantasy #15 – is worth more than $1 million.

He's also a decent guy, spending much of his money on his family and giving it to charity. He donates to food banks regularly and contributes to the Eight Mile Boulevard Association.

Eminem is one of the most famous and successful men alive and arguably the best rapper ever. He's nothing short of a musical phenomenon, and everything he touches turns to gold.

He will undoubtedly continue to thrive in the music industry and beyond. We wish him well because he's a humble chap.

She-Hulk: Attorney at Law Brings Comedy to the MCU

Syndrome K Is Yet Another Inspiring Story About the Holocaust