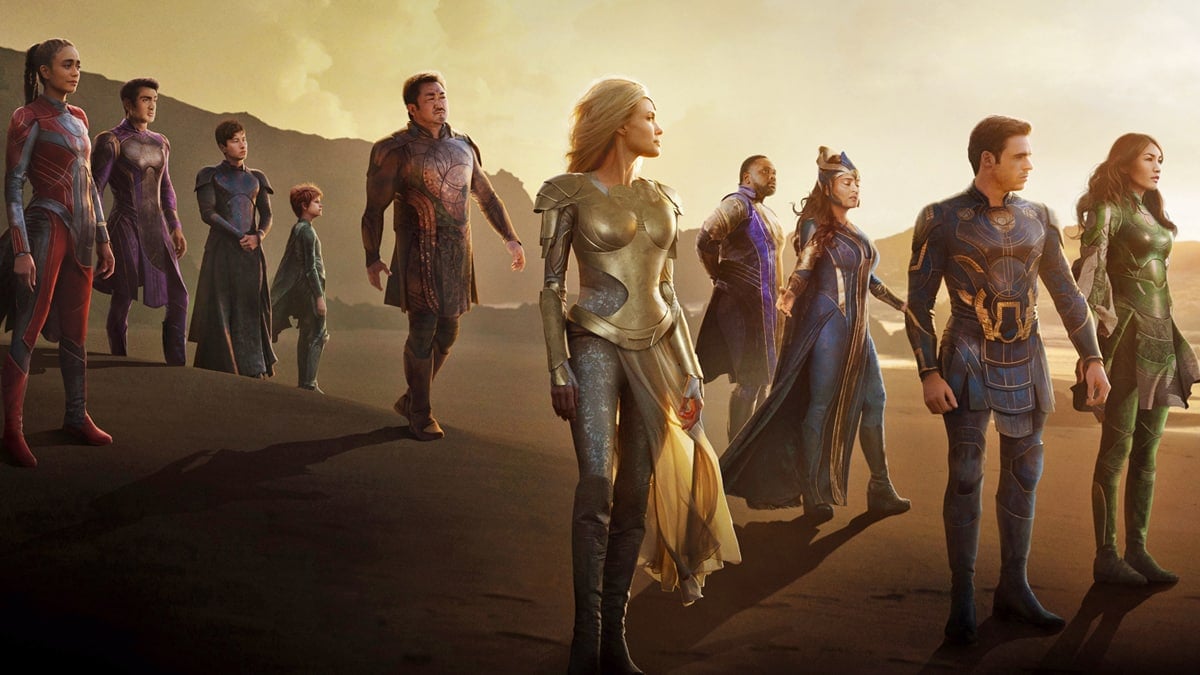 Now that The Eternals is on streaming and available for rewatching, we’re in a better place to assess and reassess its lasting worth.  And, yep, it’s still terrible. But why is it terrible? Chloé Zhao’s a talented director; there’s a star-studded and diverse cast; they spent $200 million on the thing. Why on earth (and in the cosmos) is it such a dud?

There are a lot of answers to that question—poor concept; too much plot; the damn greenscreens. But after watching the film for a second time, I think I’d single out for special censure that bane of contemporary narrative, the trolley problem.  The trolley problem—as we all know to our sorrow—is a thought experiment in utilitarian ethics. A trolley is racing along a track and is about to hit five people. You can switch the trolley to another track, but if you do the trolley will still hit one person.  What do you do?!

First, obviously, you give the person who thought up this scenario a swift kick in the trolley. Then you swear not to use this smug quandary as the basis of a major motion picture.

But alas, the Marvel Cinematic Universe skipped the second part. The Eternals is based around a trolley problem. The titular super team initially believes they were placed on earth 7000 years ago by the galactic being Arishem to protect humans from the evil CGI Deviants.

Eventually, we learn that the Eternals are actually preparing the way for the emergence of a Celestial, who was embedded in the earth’s crust millennia ago. The Celestial when it emerges will kill everyone on earth. But! The energy It gains from devouring billions of humans will go into creating new suns and galaxies, eventually generating billions and billions of intelligent beings.

So that’s the trolley problem; billions of humans die or many times billions of others never exist. Should our heroes help the Celestial, or push the trolley onto a different track and prevent its emergence?

The antagonist, Ikarus (Richard Madden), argues that the Eternals should fulfill their duty and make sure the billions live. Sersi (Gemma Chan), our hero, insists in contrast that, “Every time innocent lives have been sacrificed for the greater good, it turns out to be a mistake.” She opts for stopping the Celestial. If that feels contrived—well, yeah. That’s the thing about trolley problems. They’re a setup, which don’t so much simplify moral issues as conduct you efficiently but pointlessly around them.

The Eternals does provide some interesting insights into why trolley problems are so banal and irritating though. I think the narrative raises two main issues—personal or psychological and historical.

First, the personal. The argument between Sersi and Ikarus feels hollow because we know from the beginning that there’s no way they’re going to kill everyone on earth. This doesn’t have anything to do with who’s innocent—lots of people on earth aren’t innocent! It doesn’t have much to do with right or wrong either. It has to do with who is narratively central and who the story is for.

A story about humans is hardly going to advocate for sacrificing all humans to some abstract cosmic computer thing. More, the Marvel Cinematic Universe is a hugely lucrative franchise; killing off all its heroes and ending the universe would be a major financial mistake on Disney’s part, to put it mildly.

The leader of The Eternals, Ajak (Salma Hayek), all but explicitly admits that her motive in advocating for earth is that she wants to see future installments of the MCU. In explaining why this world, unlike the thousands she’s already destroyed, should be preserved, she recaps the plot of Infinity War/End Game. She was so thrilled at watching the Avengers defeat Thanos that she can’t bear for this (extended, multi-movie) narrative to end.

Trolley problems assume a view from nowhere; the people on the tracks are just numbers. One individual is as valuable (or expendable) as the next. But when people make actual moral choices, they’re invested. They have personal attachments to some and animosity towards others. They care about certain stories more than others. Moral conflicts are more interesting and meaningful when they acknowledge this, rather than pretending (however transparently) that ethics is a numbers game, or based on some sort of uniform understanding of innocence..

This also speaks to the movie’s ideological or historical confusions. The Eternals live through basically all of human history; as such they see a lot of atrocities. In particular, the movie shows the Spanish conquest of Tenochtitlán and the aftermath of Hiroshima. Both of these horrors are framed as the fault of technology; the Spanish weapons allow them to massacre the Aztecs (there’s no mention of smallpox)  and the atom bomb leads to terrifying carnage.

The ins and outs get a bit garbled. But once you’ve run through the twists, you can see you’re on the trolley again. Atrocity and genocide are framed as a problem of science, and scientific advancement can be turned on or off like a switch. Is progress worthwhile because of the lives it saves? Or is it bad because it enables more killing? You balance pros and cons, and throw the lever whichever way is best. In theory.

In practice, things are a good bit more complicated. Technology can enable horrific violence. But to direct that violence, you generally need ideologies of hate. The moral response to that is more complicated than refusing to invent a better mousetrap or just mind-controlling combatants, as the Eternal Druig (Barry Keoghan) does on occasion.

In the trolley problem, deaths are essentially accidental. People just wandered onto the tracks; they didn’t get pushed there by racism or sexism or imperialism or systems of marginalization. The erasure of colonialism from the European invasion of the Americas (and for that matter from the history of the Aztec empire); the erasure of racism from World War II—it feels out of place with the post-racial casting of the Eternals. The film includes admirable representation for many groups that rarely get to see themselves as heroes in big budget franchises—Asian women, gay Black men, Black deaf women. But there’s little engagement with the historical experiences or marginalizations of these groups. Ikarus is the only white man and he tries to impose his morality and vision on the others. But the possible metaphorical implications are merely raised not explored.

There is an in-universe explanation of sorts. The Eternals aren’t human; they come from space, where identity and morality are, apparently, less messy. Trolley problems, too, are supposed to cut away most of the weeds, so you can see your moral choices starkly. But the weeds and the shadows are where most of us make our moral choices. The Eternals, for all the irritating reversals and time jumps of its plot, ultimately feels like it glides too smoothly down its preordained track.

More From the Wealth of Geeks

The 5 Most Important Studios Owned by Embracer Group