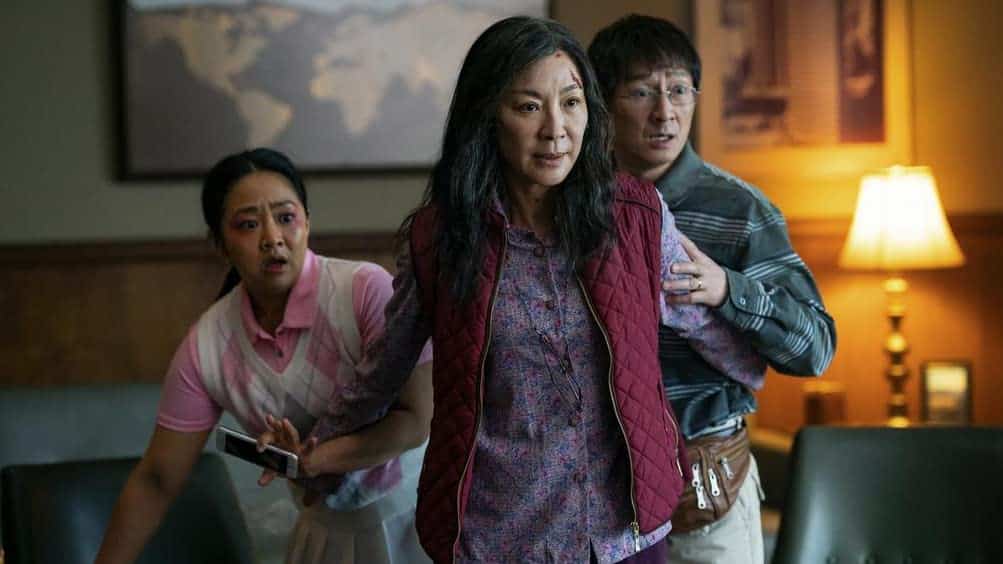 When Daniels’ previous movie, Swiss Army Man, came out, we probably all thought to ourselves, “Okay, these guys can’t make a weirder movie than this.” Flashforward six years later to Everything Everywhere All At Once, and we’re finally able to realize just how wrong we were and how little faith we had when it came to the directors’ abilities to top themselves in new, unforeseen ways.

Because rest assured, Everything Everywhere All At Once is weird — incredibly so actually, as you’ve probably concluded from seeing the trailers or even looking at that fantastically colorful poster. But like Swiss Army Man, which offered a fantastic introspective look at a man’s loneliness and his desperate desire to form an emotional bond with someone else, Everything Everywhere All At Once offers a similar analysis of family, self, and dreams, ultimately concluding with a hopeful message advocating for kindness and positivity, even when things seem pointless.

Everything Everywhere All At Once centers on Evelyn Wang (Michelle Yeoh), the co-owner of a failing laundromat with her husband, Waymond (Ke Huy Quan), who is being audited by the IRS after incorrectly filing their taxes. In addition to the audit, the Wang family is also suffering from mounting internal tension—Evelyn is on the brink of divorce with Waymond, her estranged, ill, conservative father (James Hong) has recently arrived from China, and Evelyn’s daughter, Joy (Stephanie Hsu), has been trying to get her mother to acknowledge Joy’s new girlfriend, Becky (Tallie Medel).

Amidst such mounting pressure, Evelyn is soon contacted by a version of Waymond from an alternate universe, who warns Evelyn of a dangerous multiversal threat seeking to destroy her. When that threat enters her own universe, Evelyn must access the knowledge of herself from parallel worlds in order to survive, eventually coming face to face with the threat itself — an omnipotent, multidimensional version of her own daughter.

That brief two-paragraph summary does nothing to capture the sheer ridiculousness of Everything Everywhere All At Once — in fact, in a movie as sensory-heavy as this one, I don’t think words alone could ever sum up such a crazed, energetic, visceral movie. Watching it is like trying to watch The Matrix while on the back of a roller coaster at Disney — manic and wild and immersive, lacking any dull moments whatsoever.

A few moments here and there may have reminded me of The Matrix or the surrealism and humor of a Charlie Kaufman movie, but really, such comparisons dilute Everything’s originality. Because really, even when it’s sometimes similar to those movies, it’s nothing at all like them either.

The concept of the movie’s “verse-jumping” is obviously original and the humor is frequently surreal, but the inherent messages the movie conveys and its exploration of life and familial relationships is unlike anything else out there. It’s a movie that depicts the multigenerational strain that can sometimes manifest between family members (if you have a bad relationship with your father, let’s say, you might be worried about one day having a similar relationship with your own child), using action, humor, kung fu, the multiverse, and large, black hole-like everything bagels to explore its themes.

I should begin by pointing out the movie’s strengths — aside from its unique premise and approach to the multiverse, that is. As the star of the film, Michelle Yeoh is nothing short of spectacular. Time and time again as Evelyn, we see Yeoh undergo dramatic mood shifts and personality changes as she travels through the multiverse, her knowledge of the world and of herself changing significantly along the way.

Evelyn begins the film as a stubborn, old fashioned-minded mother whose personal and professional life is imploding around her, without her necessarily even realizing it or being able to do anything about it (she has no idea that Waymond wants to talk about a divorce, for example, nor does she know how to fix her increasingly distant relationship with Joy).

When she is first introduced to the multiverse, we see Evelyn change from a simple laundromat owner to a more lamentful version of herself — someone who realizes how small and unaccomplished her own life is compared to other versions of herself as a kung fu master and movie star or world-renowned singer (as Waymond tells her, she’s living the worst version of herself, a life where she made all the wrong decisions and ended up practically achieving nothing of personal merit).

In the second half of the film, we see her personality shift yet again as she briefly falls under the spell of her daughter’s worldview — the belief that, because each decision leads to an alternate universe where we make the opposite, life is meaningless and nothing truly, genuinely matters. This new Yeoh nearly destroys multiple universes for herself, wreaking havoc because she doesn’t believe there are any repercussions to her actions. Only when she stops and listens to Waymond, who’s desperately trying to get everyone to stop fighting and just be kind to one another, does she adopt a new, optimistic view.

That, too, soon falters when she realizes the limitations of optimism — even if you’re always happy and hopeful about your situation, there are inevitably points where life doesn’t go the way you want it to — giving way to Evelyn’s final worldview: a more realistic outlook that relies on kindness and understanding, but also emphasizes holding onto the good moments in life in order to help you through the bad. It’s a much more grounded, accessible worldview compared to the overly-simplified Hollywood conclusion to films (“Don’t worry, just be happy”), and doesn’t come across at all as being too obvious, jaded, or condescending to the audience members.

Opposite Yeoh is Ke Huy Quan, perhaps best known for his appearance in The Goonies and as Indiana Jones’ lovable, pint-sized sidekick, Short Round, in Temple of Doom, marking his return to film after a 20-year hiatus. Despite his lengthy absence, Quan shows absolutely no rust whatsoever when it comes to his performance in the film, playing the multiple versions of Waymond each as effectively and uniquely as possible.

As Evelyn’s husband in the main universe, he plays an adorable husband figure — dancing around to jukebox music, enthusiastically greeting his daughter’s girlfriend at lunch, and just trying to make himself as accessible and useful as possible. As Alpha Waymond (the parallel Waymond who informs Evelyn of their corrupted, all-powerful daughter), he’s equally enthralling to watch — self-confident and knowledgeable and loyal, compared to the self-doubting, insecure Waymond of Evelyn’s universe.

Relative newcomer, Hsu (whose first break comes with this movie), also offers an interesting, career-making performance in the film. Like Quan, she’s able to swap between emotions seamlessly and portray the varying versions of Joy — most especially the simple, more grounded Joy of Evelyn’s universe, and also the omniversal, indifferent iteration of the character, known as Jobu Tupaki.

Quan and Yeoh are amazing to watch together — having great romantic and comedic chemistry — but arguably the most emotional scenes in the movie are between Yeoh and Hsu, each of them trying to connect with one another on a deeper level, but unable to because of generational and personal differences, despite their extraordinarily similar personalities. You can tell they want so very much to admit their feelings for one another, to say how much they love and respect and care for each other, but just … can’t.

It’s a relatable issue I’m sure many people have when thinking about their own parents — especially young adults still finding out who they are and what they think about the world like Joy — and Yeoh and Hsu help ground their characters’ interactions with each other, even in an otherwise silly scene or setting. (Even when the movie cuts to alternate versions of Evelyn and Joy as, say, silent rocks or piñatas — which, yes, are both real scenes in the movie — they’re still shown having an emotional heart-to-heart conversation as mother and daughter.)

At 93, James Hong is also still killing it in his acting roles, age having not even remotely slowed the prolific Hong down. Playing the character of Gong Gong, Hong hands in a more grounded performance that harkens back to his straight man characters. Though he does a fantastic job playing the character as the emotionally distant father to Evelyn — perpetually disappointed at his daughter, disdainful of her “too nice” husband, and seemingly dismissive of his granddaughter’s nontraditional, Americanized lifestyle — his straight-faced, dialed back presence in the middle of such surreal chaos provides many of the movie’s most unexpectedly comedic moments. (One of the funniest scenes was seeing the pissed-off, elderly Hong ripping googley eyes off of his clothing while disdainfully saying “So stupid!” in the movie’s climactic final battle.)

If pressed to say whether Everything Everywhere All At Once is about one central thing, I’d say it’s about a film about family, about empathy. But even more than that, it’s a movie that celebrates life — your life especially, warts and all, because even when you feel like you’re living your worst life and have made all the wrong choices, it’s guided you on a path to something meaningful, full of people who love you and who you love back, even if it takes time for you to see or realize it.

It’s a movie that encourages you to embrace others, especially those closest to you, but also complete strangers as well. (Because you never know — that seemingly heartless IRS agent auditing you may be your lover in an alternate universe where everyone has hot dogs for fingers.) It’s a film that advocates for love and kindness and optimism over cynicism, nihilism, and depression (epitomized by Jobu Tupaki’s “everything bagel”).

As Evelyn says to Joy at the end of the film, the two finally embrace and admit how much they mean to each other, “Nothing matters” — a seemingly depressing statement at first, but that sums up one of the movie’s message perfectly: it’s up to us to find meaning and love in a universe where nothing seems to make sense or matter.

It’s a strange, funny, off-kilter movie, as you might expect from the directors of Swiss Army Man, but it’s also a movie that’s never boring and contains literally no wasted scenes when it comes to either displaying heartfelt emotion or going for some sort of ridiculous, over-the-top joke. It’s bristling in creativity and imagination and possibility, a movie that can advocate for hope and sincerity through an impassioned speech in one scene, and then brilliantly and hilariously lampoons Ratatouille with raccoons in the next.

It is, in other words, a purely joyful movie to watch, charming in every way imaginable, and a huge mistake to miss out on seeing in theaters while you still can.

Big Box Stores Routinely Overcharge: Here’s How To Get the Lowest Prices

How To Write a Retirement Letter the Right Way (With Examples)