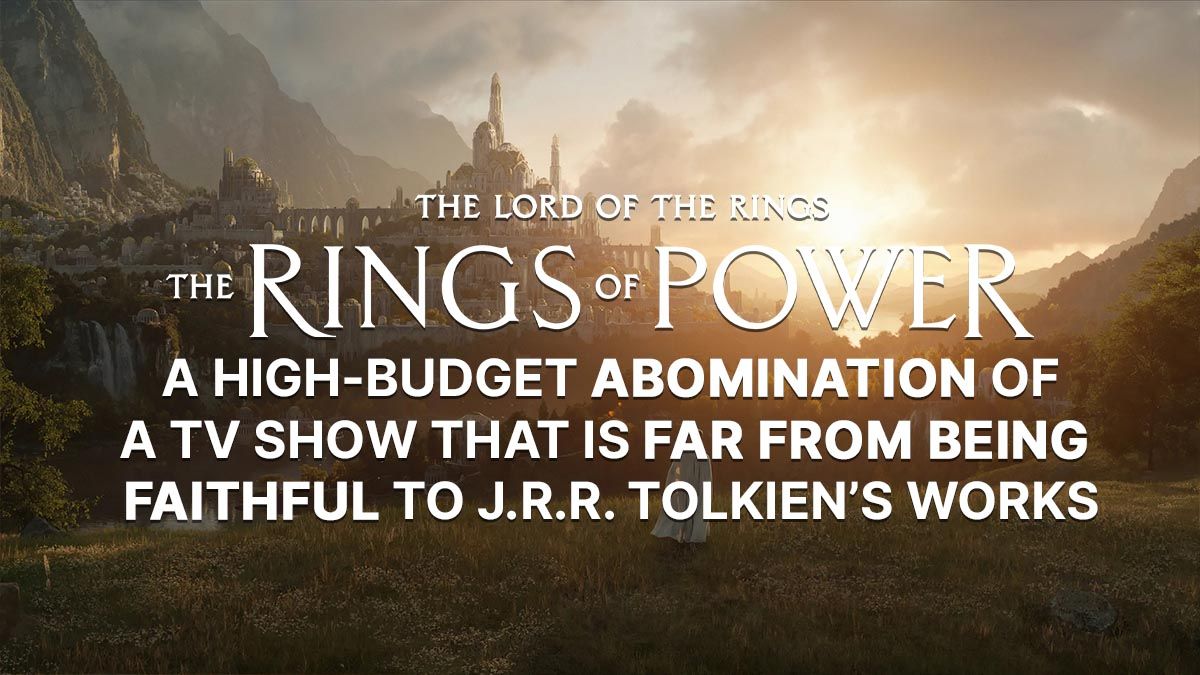 After waiting more than five years, the highly anticipated The Lord of the Rings TV show has landed on Amazon Prime Video. The high-budget TV series is set nearly 5,000 years before the events that take place in The Lord of the Rings trilogy. It is the first adaptation of J.R.R. Tolkien's legendarium since Peter Jackson's Hobbit movies.

That's one of the reasons why millions of fans around the world were both excited and concerned. They were excited to see a glimpse into Middle-Earth once again for 10 years. But they were also worried due to the possibility of seeing an adaptation far from the works of J.R.R. Tolkien. Alas, those doubts proved true as the new The Rings of Power TV series is, unfortunately, nothing more than a travesty.

It is not the show that we have been waiting for. And it seems like it will not evolve into that in the upcoming episodes. We listed everything wrong with The Lord of the Rings: Rings of Power.

Why Do People Hate The New Lord of The Rings TV Series?

To put it simply, fans believe that the show is not a faithful representation of Tolkien's works. From elves and dwarves being black to Amazon blocking reviews, it is safe to say that the controversies revolving around the show are many.

But the reason why The Rings of Power is such a problematic adaptation is not related to the casting or Amazon suspending reviews. While there's so much to say about the fans who believe that “elves must be white, they can't be black,” it is actually more than that as well.

1. Depiction of Characters in Rings of Power.

The problem with The Lord of the Rings: Rings of Power is not the black elves or black female dwarves that lack facial hair. The problem is that the elves or the characters we have seen in Rings of Power do not represent the ones we have read about in the books. The show miserably fails every time when Galadriel speaks to another person or when we see an elf, dwarf, or a harfoot. The elves of The Lord of the Rings:The Rings of Power lack the majestic, serious, and soothing mannerisms of this fictional race. Harfoots, on the other hand, seem very “artificial” with their clothes and behaviours.

On the other hand, Arondir, the controversial black elf in the show, is actually a somewhat faithful representation of a Silvan Elf. We know this from the works of J.R.R. Tolkien. Yes, the very works that have been with us for more than 60 years. And yes, the works Amazon showrunners somehow missed reading in the production process. But they somehow managed to get something right Arondir. Then ended up “coupling” him with a human farmer.

Because it has to be there for the sake of the narrative.

2. These Are Not The Elves We Have Read in The Books.

From the first minutes of the new TV show, the majestic elves of the Second Age look like flowers trying to hold to the ground during a storm. Tolkien's elves are far from being that fragile. They are not only very swift, but they are also competent travelers. We know this from this very quote from The Lord of the Rings: The Fellowship of the Ring.

“Legolas watched them for awhile with a smile upon his lips, and then he turned to the others. ‘The strongest must seek a way, say you? But I say: let a ploughman plough, but choose an otter for swimming and for running light over grass and leaf, or over snow— an Elf.”

Elves are swift runners who can easily overcome the obstacles before them. Even snow storms and harsh conditions can not best the endurance of an elf.

With that, he sprang forth nimbly, and then Frodo noticed as if for the first time, though he had long known it, that the Elf had no boots, but wore only light shoes, as he always did. And his feet made little imprint in the show.

Moreover, we also know that the elves we see on the show are the elves of the Second Age. But they do not look or feel like them, for sure.

“Farewell!” he said to Gandalf. “I go to find the Sun!” Then swift as a runner over firm sand he shot away, and quickly overtaking the toiling men, with a wave of his hand he passed them, and sped into the distance, and vanished round the rocky turn.

Similar to Legolas, the elves of the Second Age are powerful and very proud. After all, they are the ones who defeated the father of all evil in the realm. Basically, they should not falter and flee their path after toiling on a snowy mountain. Which is one of the first scenes we see in The Rings of Power.

3. Places and Interactions Between Characters Do Not Feel Genuine.

One of the most powerful elves in the realm takes walk a in the park with another incredibly talented powerful elf. Yes, we talk about Elrond and Celebrimbor as they go on their small journey to visit the dwarves to ask for their assistance. They require their talent to build a great forge in Eregion, the realm of the elven-smiths.

In Tolkien's world, you do not see members of different races knocking on each other's doors like that. They ask for an audience instead of hitting their hands on a random mountain wall in casual clothes. Unlike the scene below, we should be seeing a group of royal elves of both Lindon and Eregion walking in the mighty halls of the dwarves. Regardless of Elrond's once close friendship with Durin, an interaction such as this should be arranged in a whole different way. That's why the depiction of their interaction is absurd and does not sit well with the fans.

You do not see Elrond the Half-Elven, Vice Regent to High-King Gil-Galad knocking on some random rock on a mountain. And the answer will not be a simple “No” when that happens.

And in this absurd scene, Elrond asks Celebrimbor to return to Eregion after getting refused by the dwarves. It is highly absurd and far from the atmosphere that we have immersed ourselves in The Lord of the Rings books and movies.

4. These Are Not Tolkien's Dwarves.

We have seen countless dwarf depictions in the last 20 years. Almost every fantasy fiction novel included this stern and rigid warrior race. There is even a book series called The Dwarves, written by Markus Heitz. So there is no doubt in saying that we have a dwarf stereotype on our hands.

Dwarves in many fantasy worlds love ale and often come with a heavy Scottish accent along with long beards. Almost all of them are humorous, hot-headed and bad-tempered.

But the dwarves in J.R.R. Tolkien's legendarium are different than the ones we have been seeing in pop culture. They are proud masters of stone and are known for their stubborn and secretive mannerisms. Unlike a typical dwarf in a fantasy fiction, Tolkien's dwarves are staid, calm, and almost awe-inspiring. They are dignified in all of their actions. They are both proud and earnest yet never afraid of dictating change. They are definitely different from the pop culture dwarves that we see in The Rings of Power.

“Since they were to come in the days of the power of Melkor, Aule made the dwarves strong to endure. Therefore, they are stone-hard, stubborn, fast in friendship and in enmity, and they suffer toil and hunger and hurt of body more hardily than all other speaking peoples; and they live long, far beyond the span of Men, yet not forever.”

Unfaithful to this very description, the dwarves of the show are one of the many things that are wrong with The Rings of Power. They seem like they come from a random DnD setting instead of Tolkien's Naugrim, Belegost, or Erebor.

In case you haven't noticed, we have not delved into the portrayal of Galadriel and her adventure. We believe that it is best to avoid discussing Galadriel's arc in The Rings of Power. At this point, we really want to believe that the show is about an elven warrior who has the same name as Galadriel, one of the most influential characters in Tolkien's works.

Otherwise, it will be sad TV series consisting of five long seasons troubled with poor pacing, chaotic narrative, and soulless depiction of a brilliantly-designed fictional universe.