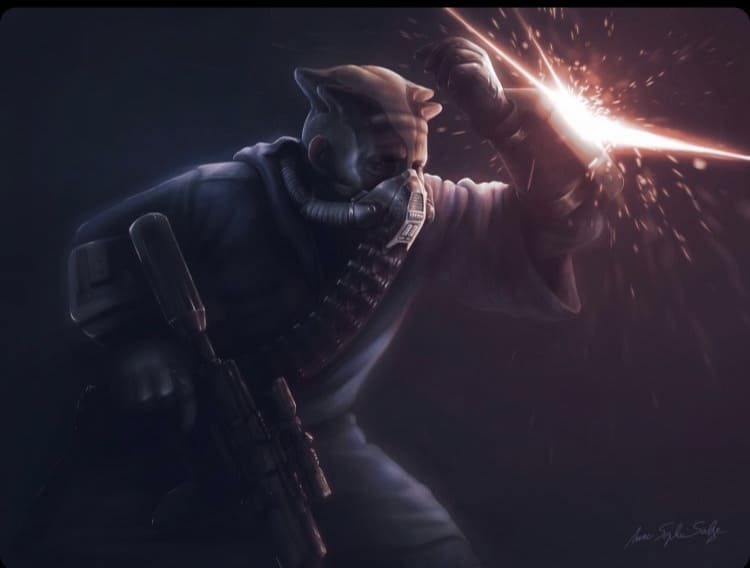 In 2019, Dominic Pace got to live out every Star Wars fan’s dream by bringing to life a character within the Star Wars universe. He hails from Ossining, New York, and currently calls Los Angeles home.

He has been steadily working in the industry for twenty years, lending his acting abilities to shows like NCIS, Desperate Housewives, and Superstore. But it’s his appearance in Chapter One and Three of The Mandalorian that has earned him a loyal fanbase.

Wealth of Geeks previously interviewed Dominic Pace about his role on The Mandalorian, and we are thrilled to have another chance to speak with him about his career.

Maggie Lovitt (ML): After you landed a one-of-a-kind Featured Bounty Hunter on The Mandalorian, who was the first person you told? Did you manage to keep it a complete secret?

Dominic Pace (DP): I sent a text to my family.  I’ve been in the business for quite some time, so they all knew not to publish anything on social media.  I wish I could say I enjoyed every minute from the start of the production, but there was a lot of ‘what ifs’ at that time.  When you’re only featured, it’s not about you, so there’s a reason for hesitation to celebrate such a dream for any Star Wars fan completely.

You could be cut from the film, and the producers could choose that they didn’t like the makeup selected and cut you.  There [was] also two-thirds of a chance they were going to put me in a helmet, which would’ve been a little less climactic.  Then, there’s the anticipation of the camera covering you during the scenes.

It wasn’t until September of 2019, one year later, that I could genuinely celebrate being immortalized in the Star Wars universe.  I received a text from a friend who saw me in the trailer.  That was when I could officially announce as I did keep it a secret for a year for anyone other than family and a few trusted illustrators. 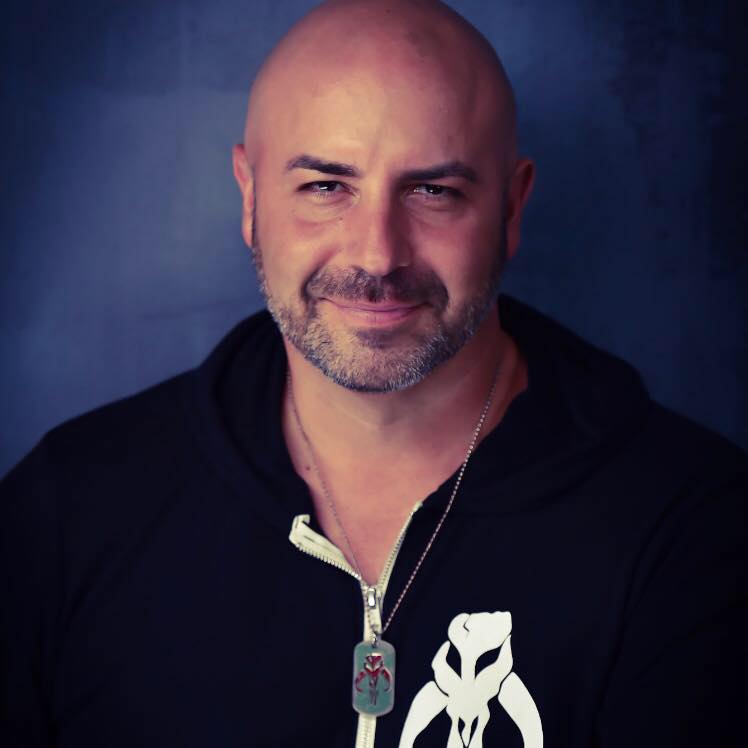 ML: As an actor, I had the surreal privilege of being part of one of my own favorite franchises. For you, being a Star Wars fan, what was it like being on set and becoming part of the legacy?

DP: It really was special, and it takes a Star Wars fan to understand the excitement and meaning behind it.  I just had my first bit of snarky hate mail where this one man couldn’t understand what all the ‘hoopla’ was about.

He’s right in a way.. if it was any other project, less than one minute screen time really wouldn’t mean a thing.  Star Wars is the only franchise where every character is unique, including the side characters.

Not to mention being a Bounty Hunter.  The original six Bounty Hunters had the same amount of short screen time in The Empire Strikes Back.  This is a universe where millions of fans gravitate towards and for a good reason.  They want to know the backstory and species of every character.  I’ve embraced the fans and also completely acknowledge this is not an acting accolade like my normal career as a TV character actor, but more of a fan experience of a lifetime.

ML: What was the prosthetic process like for becoming Gekko? How early were your call times?

DP: I would get in as early as 5 am.  Brian Sipe is a prominent member of Legacy Effects. He, along with his amazing team, brought “Gekko” to life for about ten days of shooting.  From makeup to wardrobe, it was about a two-hour process, but I was in my glory.

Normally 15-16 hour days would seem like work, and the costume would seem heavy and hot.  The adrenaline was pumping each day as I knew I was part of something special.  I have almost 100 principal television credits to my name. Still, the opportunity of being immortalized in the Star Wars universe was second to none, and I am so grateful for it. 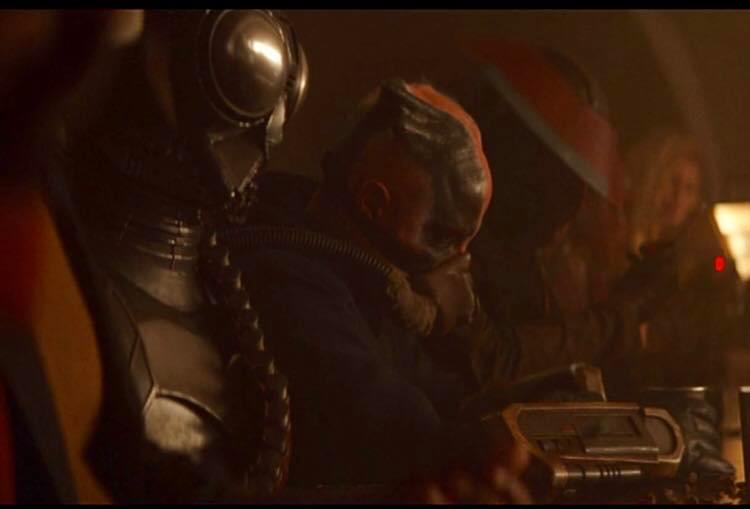 ML: You have done a number of Star Wars podcasts since your appearance on The Mandalorian, how has that been?

DP: I’ve loved everyone, and I’ve embraced the fans and charities.  The world is such a dark place, and what George Lucas has created has been a common denominator for people from all walks of life.

It’s about positivity, family, and the beautiful mythology of believing in yourself for all that is good.  The podcasts have been similar to a die-hard sports fan talking about sports.. an absolute pleasure, and I’m so grateful for all the support and attention.

ML: Do you have any fun experiences from The Mandalorian set that you can share with us? Funniest moment?

DP: The nickname “Gekko’ came from a model/piece that Brian Sipe had done years prior.  Initially, my Bounty Hunter was supposed to have bumps on its head, which looked similar to boobs.  The other Bounty Hunters and I had a good laugh on the first day of screen tests.

I joked that there was a Bounty Hunter support group that empathized with my look.  We chuckled, but as soon as I could, I begged Brian to change the look to some sort of horns if it wasn’t too inconvenient.  Brian is one of the nicest and most talented makeup artists in the business. I was really grateful he changed the look, and I am hopeful it will make a great action figure someday.

ML: As a fan, what did you think of The Mandalorian? Where do you hope the series goes?

DP: I think Jon and Dave, along with their incredible team of directors, understand the fans as well as what makes a good story.  Even observing from afar, you could tell their production team had it all under control.  They were confident with what they were creating, and I think those eight episodes show.

I’m a fan of the original trilogy, so I always love it when they give the nod to legendary characters or species.  I’d love to see some of the legendary Bounty Hunters show up and, of course, would love to return myself. Anything is possible.

ML: You’ve been in the industry for over two decades. Looking at your resume, you’ve had a lot of Prison Guard, Detective, Henchmen-type roles. Is that a character type you’re looking to break from, or is that the niche you love?

DP: Honestly, I’m just so grateful to work. It’s a joy to be on set and to be cast in what I play well.  The opportunity to make a living at what I love is more than I could’ve asked for.  Sure, I’d love larger roles here and there with some appearances, but I’m proud of what I’ve achieved and proud I’ve taken every opportunity Hollywood has offered me.

ML: Your first credit on IMDb is an uncredited role on Saturday Night Live (SNL) in the 90s. I feel like that’s a New York actor right of passage. What was that experience like?

DP: I was studying in New York at the time, and similar to today, I never turn down work of any kind.  I’ve had agents over the years who have tried to persuade me to take Guest Starring roles or higher.  I just love being on set, and that week with the SNL cast was no different.

Such amazing energy of excitement on that 8th floor at Rockefeller Plaza.  Helen Hunt was hosting, and Jack Nicholson made a cameo appearance that night. I’m walking around the corner of the hallway, and I bump right into him.  He gave me a nod, and I gave him one back.  I went down to the lobby for a break one day of rehearsal and had the privilege of riding the elevator up with just Lorne Michaels and I.

I played a basketball player who busts out of the closet at the end.  The energy of the crowd that night was as if all the excitement of New York City was bottled up in one room.  I remember standing on the X, where all of the stars have given their opening monologue.  It was a week I’ll never forget.  Studying in New York City during the mid-nineties was filled with great memories.

ML: I've always joked that I personally got into acting because of the catering on set. What has been one of your favorite meals on set?

DP: Kevin Costner and Tom Cruise have had the best catering where they spare no expense.  I was a teammate of Costner in For Love Of The Game.  There [were] literally ice sculptures during lunch by the food.  I remember surf and turf one day, and that was really amazing.

Tom Cruise ordered an In and Out truck for Collateral, and I definitely packed on a few pounds while doubling Frankenstein on the set of Van Helsing.  Food galore and sometimes that is definitely my weakness.

ML: What is one thing you have to have at crafty?

DP: It’s a catch-22 as I love the breakfast burritos in the am.  The problem is you’ll be sluggish if you have a significant role.  I’ve definitely splurged more than once so long as my wardrobe isn’t too tight.

ML: How are you handling quarantine? Have you and your sons been building Lego sets? Bingeing anything good on streaming?

DP: We have finished a 1000 piece puzzle of Thomas Kincaid, as well as completed out Lego Star Wars Galaxy in their room. I bought a large shadow box frame for some Mandalorian replicas I wanted to be displayed as well.  I’ve been really active with the Star Wars podcasts as well as the fan base.

Sending videos to cheer up Star Wars fans, along with shout outs to so many charitable organizations involved with the Star Wars community.

I’ve been handling it ok, but like everyone else, just hoping to see the light at the end of the tunnel as this was supposed to be quite the year for touring the world.  I had a 25-city comic-con tour I meticulously planned this past December.  Though I’m disappointed, I think of those less fortunate during this time, and I am grateful for what I have.

ML: Over the past year, you have appeared at a number of conventions and also worked to raise funds with the 501st Legion. Are you currently working with any charities?

DP: I’m very humbled to have become inducted as an Honorary Member of The 501st Legion, The Mandalorian Mercs, The Rebel Legion, Sith Dynasty, as well as the Imperial Outlanders.  Countless autographs handed out to their local charities, as well as their members who do so much for their communities.

I have donated a handful of personal items and original illustrations to benefit the Make A Wish Foundation for an event in September. That event will be in association with The 501st Legion of Oklahoma. So much more planned as soon as we are all out of the quarantine.

ML: What can fans see you in next?

DP: I will be making a fun appearance on ABC’s To Tell The Truth hosted by Anthony Anderson.  The season premiere will be on Thursday, May 21st, on ABC.  I am also starring in a feature film titled Anonymous Killers, which is scheduled for a theatrical release later this year.

As soon as the quarantine ends, I plan to return to a moderate convention tour, which will roll into 2021.  I appreciate all the support from the Star Wars fan base.

How High Risk Individuals Can Be Financially Stable During Quarantine

How Long To Beat the Most Popular Video Games