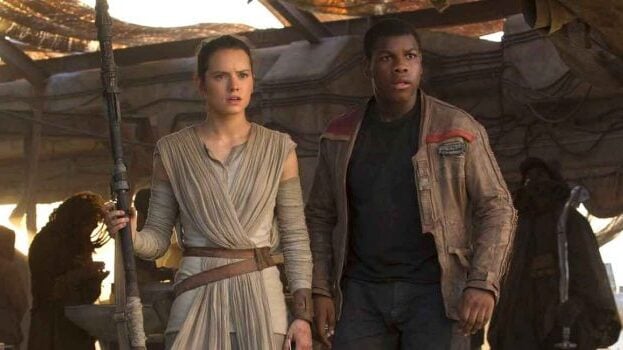 Everyone can remember that opening clip. John Boyega lost in Jakku's ocean of sand, our first glimpse of the Millennium Falcon, and Andy Serkis's metallic voiceover as Supreme Leader Snoke. The 88-second montage sent shockwaves through the ranks of Star Wars devotees across the globe.

Those Star Wars disciples of Generation X were excited at the prospect of J.J. Abrams helming this mothership of science-fiction heritage. What could be better than Disney's resources joining with their generation's most celebrated sci-fi director?

When we look back and compare the first and last Star Wars trilogies, the portrayal of male and female characters is unsurprisingly different.

We can start with Episode IV to Episode VI. Here, we have our leading man in Luke Skywalker. He follows the hero's journey with his mentor Obi-Wan Kenobi (and later, Yoda) to one side, his antagonist, Vader, to the other, plenty of foil characters around him, and a curious potential love interest in Princess Leia. Then, after his family dies, he reluctantly enters the unknown world and follows Obi-Wan into the fray.

Luke follows his destiny and hero's arc as any intergalactic Jedi master might. He rescues a princess from an evil overlord, trains with a wise sage or father figure, and eventually saves the citizens of every galaxy from the space Nazis.

Luke suffers abject hurt when his family and, later, Obi-Wan die. He also sacrifices a symbolic hand in a battle with the universe's most fearsome dark knight.

Luke's arc is partly about revenge, which manifests itself in the climax of Episode V. Still, it is more about becoming a man — in 1970s terms at least. Luke starts the trilogy as a bright-eyed farm boy racer in a dusty backcountry. He ends his journey a fearsome, deadly ronin in black: an alpha-Jedi who is now the universe's most feared warrior.

The backdrop of this space opera puts women in specific roles; Princess Leia is a tough-talking royal with the steeliness necessary for resistance to tyranny. However, Leia of the original films is no passive damsel in distress. Nevertheless, she is thrust into this archetype throughout much of the trilogy, culminating as that golden bikini servant in Hutt Castle on Tattoine. She must be rescued once more by her brother in black in Episode VI's opening act.

It is slim pickings in pre-Disney Lucasworld for other female roles. What is left is a litany of cut scenes, small walk-on parts, and shallow stock characters. But for the heroic exploits in the prequel trilogy of Padmé, we have very little in the way of strong female characters.

Sure, in Episode IV, Aunt Beru is sage-like in her assessment of Uncle Owen's rigid treatment of Luke. Mon Mothma is similar in her small role as the founding commander of the Rebellion with Leia's adopted father, Bail Organa.

The first trilogy has great women doing great things, though their screen time doesn't do their characters justice. Leia holds her own in every scene and comes third in total screen time throughout Episode IV to Episode VI. The rest of the screen time is for male characters. However, as we look at the treatment of female characters in the newer trilogy, this is far from the case.

In Rey's journey through Episode VII to Episode IX, she follows a path akin to Luke's as a Jakku desert dweller, this heroine coming from more humble beginnings as a scrap-hunting orphan drifter, albeit with a similar ambiguous past.

She joins the cause of the Resistance through sheer chance as opposed to destiny when she meets BB-8 and then later Finn at the market. She gets embroiled in his escape from The First Order (our updated, more brazenly Nazified version of the Empire).

Within minutes, Rey is behind the controls of The Millennium Falcon and thrust into the world of post-Empire First Order vs. Resistance as Episode VII makes its mark in the new Star Wars universe. Rey's parallels to Luke become clear by her alliance with the ever-reluctant Finn and affectionate relationship with BB-8 (the new R2-D2).

Like Luke, she must also come to terms with her past: her emergence as a Palpatine shadows Luke's destiny as the son of Vader. Rey's need to reject the seductive dark side drives her inner turmoil. In contrast, Luke's focus is on rescuing his father from it.

Just as Darth Vader offers the black glove to his son in Episode V, Rey arrives at a similar crossroads with Kylo Ren. He extends the same dark hand as he becomes drunk on the elixir of his considerable Force strength. Like Luke, Rey has no sights set on romance until, at least, Kylo Ren finally sees the light, saving her life. Rey reciprocates with a kiss that seals the Force dyad prophecy.

There is no sense at any moment during the film that Rey is in danger from Kylo Ren, but for the first movie's climax and inevitable face-off. Kylo Ren's reversion to Ben Solo finally cements one of the trilogy's male protagonists as a hero.

The other men in Episodes VII through IX don't cover themselves in much glory. Finn spends most of the trilogy in self-preservation mode, manifesting as a result of the trauma he experienced as a child and under the First Order.

Another female character, Rose, serves as his moral compass throughout the trilogy. She even saves his life when in Episode VIII, Finn commits himself to a kamikaze attack on the First Order's artillery.

In another boy vs. girl dichotomy, Amilyn Holdo scolds Poe Dameron and names him a “Trigger-happy flyboy” before Poe attempts a mutiny and gets arrested. Poe maybe represents an older Star Wars archetype, much like Han Solo in the first trilogy.

However, eventually, Poe redeems himself. Amilyn passes into immortal heroic status when she saves the fleeing rebels: sacrificing herself and doing what Finn couldn't manage earlier.

Luke ends Episode VII with an almost god-like aura. When Rey passes her new mentor the lightsaber, it is an iconic image of Star Wars folklore. However, just as when Kylo Ren murders his father, Luke's tired warrior suffers his demise throughout Episode VIII before salvaging his credibility. (sidenote: Disney must know the hurt that seeing Luke toss that lightsaber into the sea caused older Star Wars fans).

There is, for sure, a strong pattern of redemption for male characters in Disney's trilogy, and though it is heavy-handed, it is for a good reason.

When we hear that final, goosebump-inducing “Skywalker” from Rey outside Luke's rebuilt childhood home, the spirit of Star Wars reverberates. Much as it has done throughout many years of joyful history for children and grown-ups worldwide. But, it indicates where we are that these words are uttered into the wind by a powerful female lead actor.

Love Accidentally Is A Rom-Com Stripped of Genius, Wit, or Charm