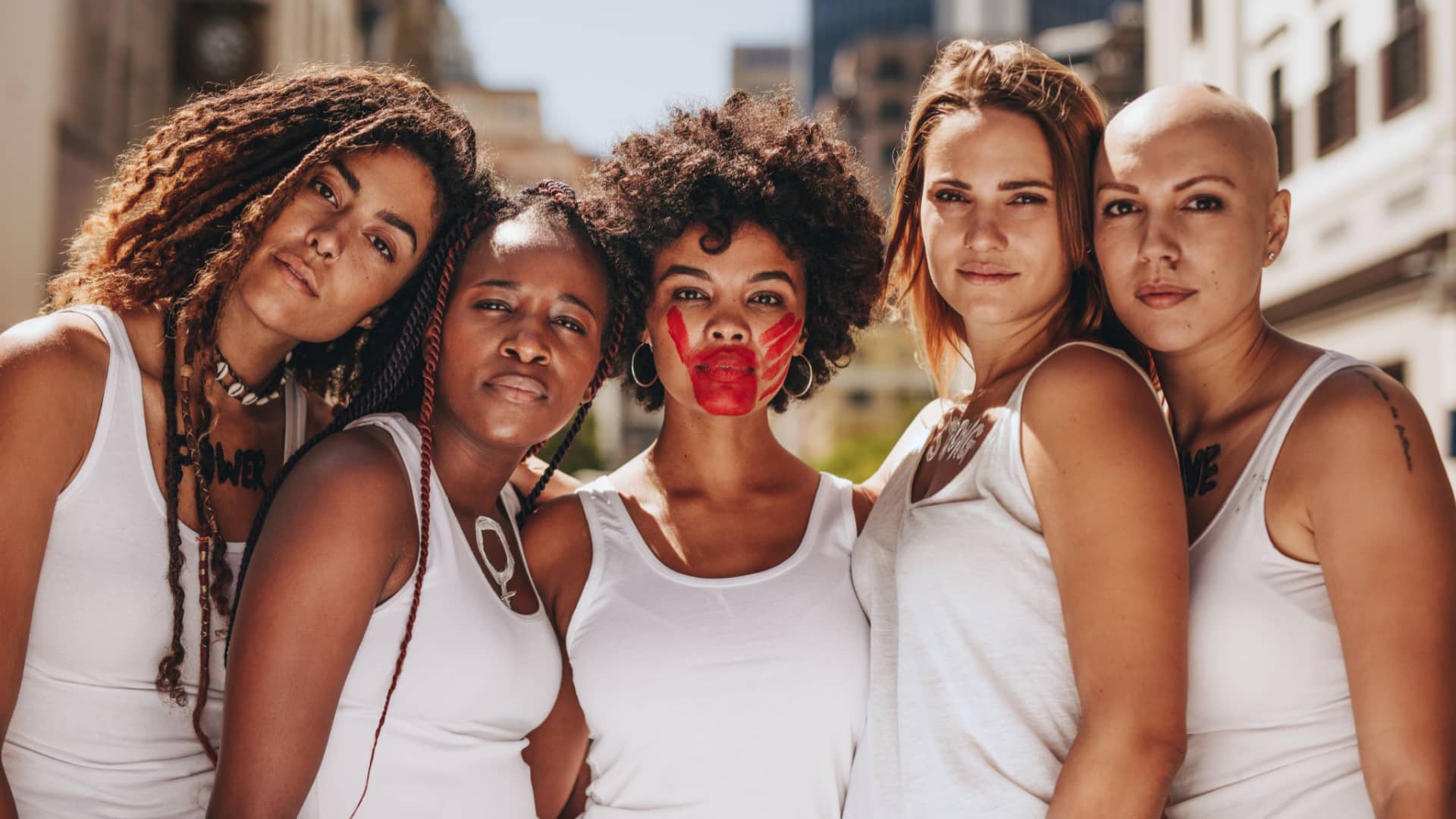 The uncomplimentary margin between men and women grows thinner with time, even more in the 21st century with the invasion of “woke” culture. Good news for Hollywood – and us. There's more to a female actor's life than drab stereotypical roles of complacent wives, nuns, and hot office clerks.

Many celebrities who have suffered the brunt of the tragically sexist movie industry have spoken up against the discrimination and even pioneered movements opposing it.

Guardians of the Galaxy and Avatar star Zoe Saldaña admitted that she often feels lonely on set, with fewer females present. “Art is primarily male-driven,” she says on Sway In The Morning, “We have to address the pink elephant in the room.” And she's right. Not about the elephant – they don't come in pink yet. But, prejudice is a big problem that we must contend with. Fortunately, mass media and gender activists are all tooth and nail in fighting for the fundamental right to equality, so much so that the script is being rewritten.

From the ludicrous, cringe-worthy Super Girl to franchises like Terminator and James Bond, we see more girl-power in action – yay! Just kidding, make it stop.

Indeed, the newfangled zeal for women's representation in entertainment is a splendid movement. Still, hey – too much of any good thing can be bad. Especially when it is being done the wrong way.

To induct feminism into Hollywood is to portray it in its proper form, with its foundational values upheld. Not playing with the concept and projecting half-truths. Else, it's no more representation but commodity feminism, which appropriates the supposed ideology of female liberation. A capitalist venture to feed off the sentiments of an oppressed community. It's not flattering; it's insulting.

Okay, maybe not everyone is in it for the money. Some filmmakers/production companies are genuine in their fight against inequality. But most others are opportunists of a mainstream socio-political issue. They pander in the guise of advocacy to gratify their appetites for more box office profits. They leverage exploitation, knowing no matter how badly they get the job done, at least they get it done. And anyone who has a problem with the “job well done” can take it up on social media. That, at the expense of sounding anti-feminist and being lynched by a mob of faux activists and feminist posers. Good riddance to the other fundamental right of expression.

Capitalism aside, there are several things wrong with Hollywood's toe-dipping in feminism that have to do with its pretentious, forceful nature.

It's an ugly truth, but let's face it: the divide between men and women exists, not just in movies, even as we strive for its abolishment. But apparently, the movie industry might be too eager to see that happen. And when they portray falsehoods in place of reality, they earn eye rolls instead of accolades.

By painting a pseudo-gender-balanced world, it is safe to assume that these filmmakers remain oblivious to the core of sexism. As such, they choose the easiest option of total eradication, birthing a weak art form from incompetence.

Unfortunately, it isn't as easy as flipping a magic wand and making the problem disappear. That may be the point of – and plausible in – fiction, but it's a wrong approach to subversion and/or inspiring a change. See, you can't just infuse women into the picture, adding no actual substance, hoping it solves the problem of sexism.

You can't just reinvent things to tick boxes of representation. The best ways to strive for equality do not involve downplaying or acclimating the subject to presupposed standards.

We carve all stories, fictional or not, from the truth. So, honesty is a fraction of any authentic piece of art.

True feminism entails woman empowerment – the invincible feeling every girl gets when Beyoncé's Lemonade or Renaissance comes on – nothing more or less. Most people want to practice feminism with the caveat that they can tailor it to their needs whenever they please. It's an outright abuse of the culture – a crime even Hollywood is guilty of.

The Woman King with award-winning Viola Davis is one blueprint. A group of women warriors fights to protect their land and people from imperialists and an enemy empire – not from men. Even though the imperialists and enemies were men. Yet it doesn't ignore the existence of sexism. When Oba Ade (Jimmy Odukoya), leader of the Oyo Empire, finds the slaughtered heads of his men, he appears more angry because women murdered them.

The female warriors don't waste screen time comparing their strengths to the men they see as equal opponents. Neither do they whine about the victimization cost of being a woman – how every man on earth must pay. This is despite the fact that the Oyo captured and sexually abused General Nanisca, leader of the Agojie. Instead, they're too busy creating a movie that feels like a movie.

Feminism becomes as big a problem as sexism when it toes the line from its true meaning to bordering antipodal notions.

Sometimes, as in She-Hulk: Attorney at Law, they depict the female gender as superior, flipping the age-old narrative but achieving the opposite of what they hoped. The common misconceptions that factitious feminists and Hollywood oligarchs showcase are feminism as misandry and reverse-misogyny.

Sure, retelling these stories, changing the narrative, and putting women in the spotlight is nice. But it seems gender-deprecating to be in the spotlight that is really the shadow of men who have not only played but owned those roles.

It is saying women are incapable of telling their own stories, or unworthy of even having them.

The worst-case scenario is flaunting an all-female cast that brings nothing besides an all-female cast to the table. A movie becomes disappointing when the entire plot is the female actors having to remind us they are the major acts, not the supporting cast. Unless your audience comprises hamsters and seventy-year-olds with brain aneurysms and Alzheimer's, get to the point.

We Don't Need To Denigrate To Celebrate

In She-Hulk, Jennifer Walters (Tatiana Maslany) sizes her trauma to her cousin, Hulk. In case you're wondering, yes – the same green guy who fought Thanos was forced into isolation and learned how to control the “other guy” all by himself. Walters never needed the whole hero's journey, though. Apparently, she's had to deal with triggers like anger her entire life because of – you guessed it – men. She quickly gains complete control of her abilities and psyche, while Bruce wrote a double encyclopedia to master his. It's as though for women to shine, we must de-elevate the status and credibility of men – which sounds an awful lot like misandry to me.

Again, The Woman King‘s Agojie could have easily hated ALL men on behalf of those who oppressed them. Still, their battle remained with the Oyo Empire.

Hollywood needs to take an objective stance. It's literally traumatizing, ripping apart older narratives and antagonizing men to make room for women to shine when there are thousands of untapped source materials. It explains why many feminist reboots receive massive backlash. Take Ghostbusters and Ocean's 8, for instance. The latter overhauls itself with female stars who are “just as good as men – and better.” At the very least, I hope there's an Oscar category for that.

Again, we get to see some cool female empowerment with Black Widow. She fights Hawkeye at Vormir, then sacrifices herself to prove that she can be the one doing the saving, for once, and, pfft, women don't need saving. Except, of course, by fellow women, vis-à-vis the all-female help Wanda Maximoff had in Avengers: Infinity War fighting against Proxima Midnight.

In overcomplicating simple concepts, they've misconstrued feminism to mean “strong leads”, being quite literal in their definition of “strong,” too. As a result, Hollywood is screening feminist scripts through shady binoculars, hoping it involves fighting men or fighting like men. Even just a single scene. Like, seriously, stop.

We're screaming, “down with the patriarchy,” and claiming the ladder of sexism for ourselves, basking in hypocrisy. It makes one question the propriety of those allowed to tell these stories and the risk hazards they face in the wrong hands.

Marvel's had another awful wrap with Captain Marvel, one of the most disliked Marvel characters. And why? Honey, guess. Not to mention Dr. Jane Foster in Thor: Love and Thunder. One day she's a professor, the next she's easily wielding the precious Mjolnir, Thor's weapon, which, news flash, no longer answers to him. Let's say she was worthy. Not only does she face Gorr the God Butcher with it, instantly as skilled as a Valkyrie, she also picks a cute catchphrase.

Phew. Forget about creating strong female leads, and create characters that are human as much as they are superhuman. Characters the viewers can actually relate to, not ones that are easy sells for a market strategy. We want all the intensity of human emotions that aren't neglected because they seem feminine. So, the silver screen flaunts toxic masculinity, and we're forced to embrace it?

The makers of Star Trek could have easily depicted Nero as a man solely notable for his killing sprees, criminal for the love of it. Instead, they lead us through his character arc and development. They answer all the why's. To excuse his stoic personality, Batman suffered significant trauma, blaming himself for his parents' accident.

In The Boss, Michelle Darnell (Melissa McCarthy), despite being a woman of notorious reputation and wealth, has her weaknesses connected with family after being rejected from many foster homes. It explains her determination for success, aside from belonging to a male-dominated society.

Anatomy of a Scandal cites the young Holly Berry, who had her virginity stolen from her in college. So, we understand her desperate quest to help another sexually abused victim – even though she is at first introduced as an autonomous, impassable lawyer. They take a deep dive into her personal sensibilities and vulnerabilities without taking away anything from the fact that she is a strong woman.

They also rip into the “I don't need a man in my life” narrative, as she has an affair with a married man. Her fellow lawyer, which she opens up to amidst a breakdown in her latter days of paranoia.

Suppose filmmakers are so intent on making women independently supreme and lone protagonists. In that case, they need to answer all the why's – shout-out to WandaVision.

We need more Agojies, Amazons, Mulans (*coughs* the Disney animated version), and fewer female actors/characters being used for social and political gains. Yes, they could make it look like they care about the plot – it's the minimum.

We love the diversity, but Hollywood has to lend a keen ear to women's perspectives to understand our plight or steer off gender-sensitive matters.

To paint feminism in its true light, storytellers must realize that it's not about men – it's about women. It's not about hate; it's about empowerment. And it's certainly not a profit fountain. With the rumored reboot of Pirates of the Caribbean on the way, we can only hope they get it right-er this time. I mean, how bad can they screw up?

Holidays on a Budget: 13 Tips To Create a Memorable, Affordable Holiday

The 10 Best Sitcom Characters of All Time May Surprise You