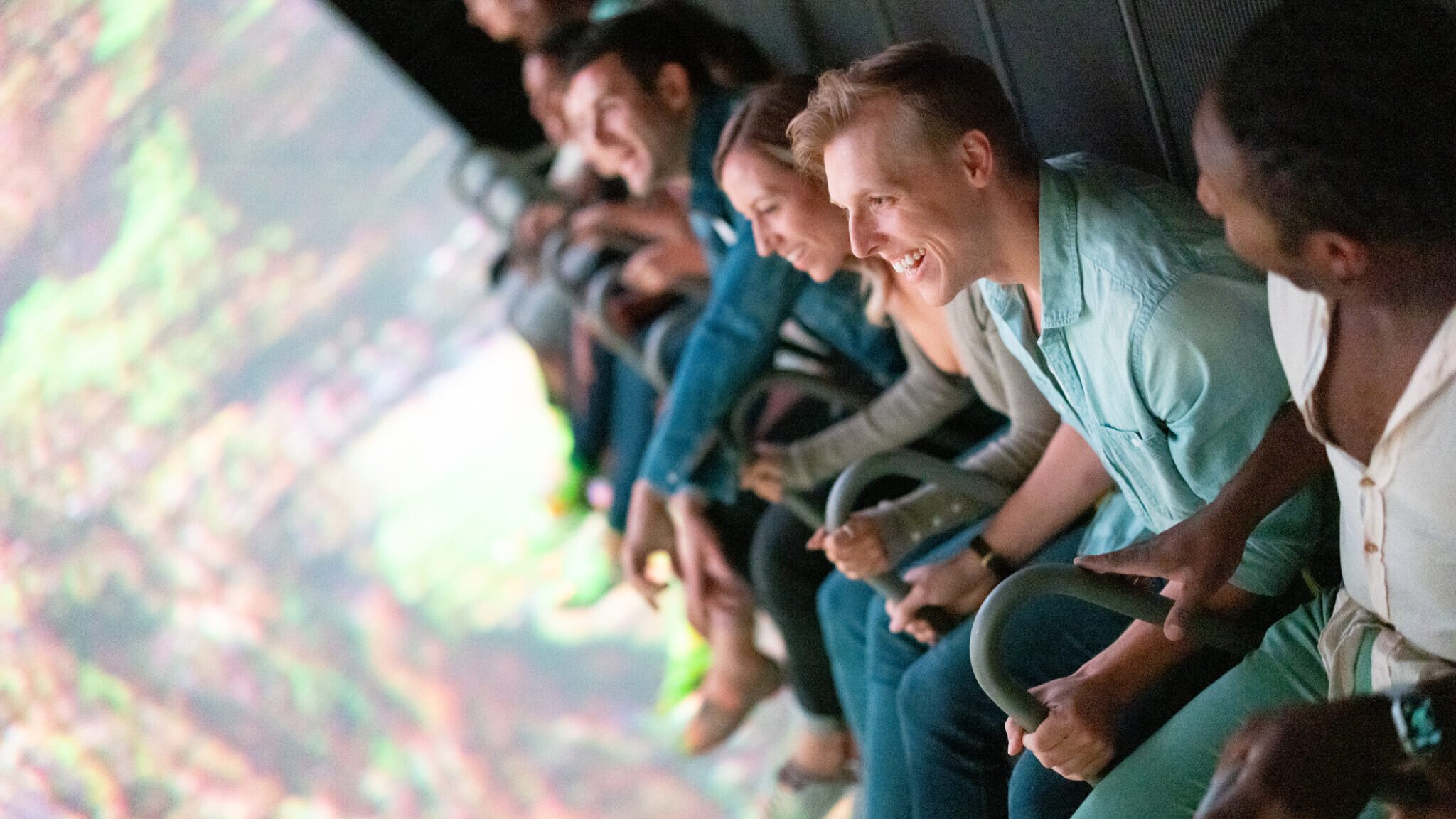 Looking for an experience that is both exhilarating and unique? Smell the saltwater above the waves in California and feel the wind as you soar over Iceland without ever using your passport. With special effects and 6 points of motion, FlyOver is the closest thing you can ever experience to flying.

The state-of-the-art technology will make you feel like you are soaring above some of the most famous locations and gorgeous landscapes in the world. If you want to feel that unmistakable feeling of flight, FlyOver is a must-see attraction.

From the Talents of a Visionary

So what exactly is this incredible flying experience? FlyOver offers visitors almost 9 minutes of pure magic, showcasing 8K high definition productions on a 52.5-foot wide spherical screen. Riders sit suspended on the most technologically advanced seating while they are whisked away on adventures around the wild west or across Iceland.

Creative director and “founding father of flight rides,” Rick Rothschild is the mastermind behind these attractions. Rides using this new technology would not exist without the vision and creativity of Rothschild. During his 30-plus-year tenure as a creative executive at Walt Disney Imagineering, Rothschild produced more than 25 separate theme park attractions and was responsible for developing Disneyland's “Soarin’” experience.

Rothschild's favorite movie growing up was Peter Pan, and he always dreamed of flying. He spent his days climbing trees to see the world from a different perspective.

“What we do is transport you and immerse you in a flying experience,” says FlyOver's Rick Rothschild. “Essentially, you've detached yourself from reality and accepted this new reality that we're giving you.”

Together with Cannes Lion Award-winning director Dave Mossop, their expertise allows riders to explore the virtual skies with a unique bird's eye view of stunning landscapes and locations.

There are endless attractions in Las Vegas vying for visitors' attention in sin city, but FlyOver in Las Vegas has become one of the hottest attractions in town. FlyOver Las Vegas took over the former United Artists Theater and Famous Footwear spaces right on the iconic strip beside the Hard Rock Cafe and across the street from the MGM Grand.

Two theaters at FlyOver Las Vegas currently show The Real Wild West and Legendary Iceland. However, the FlyOver experience isn't just about the ride. From the moment you walk in off the Strip until the time you leave is an experience. The renowned studio Moment Factory created the immersive multimedia venue, creating a multi-faceted pre-show experience leading up to the ride itself.

As you purchase your tickets and walk through the corridor to the lobby, you'll be visually mesmerized by the calming light show and the Grand Canyon-inspired environment that will set the tone for your adventure. You will feel like you're a world away from the restless energy of Las Vegas Boulevard.

Before you enter the rides boarding area, you can relax at The Lost Cactus Bar. The cocktails are simply some of the best in Vegas and are an experience themselves. All the cocktails are heavenly, but you must try the Sin City Cocktail or the Prickly Pear Margarita. There are also refreshing mocktails for a non-alcoholic option.

As you enter the pre-show room, you will be immediately transported to the film's location. The story will unfold before your eyes, revealing more about the film location's history and culture. The pre-show is an essential part of the filmmaking process that allows you to fully immerse yourself in the world of the film. By the time the lights dim and the film begins, you will feel like you are right there in the midst of the action.

Following the pre-show, riders are split into two groups and take their seats for the ride. One group of 20 is seated in the top section, and the other group of 10 is seated in the bottom section of seating. No matter where you sit, you will be delighted by the multi-sensory experience in front of the 52.5-foot-wide spherical screen while the seats move in sequence with the film — giving audiences the sensation of flight.

Every detail on the screen is crystal clear, and the sound system envelops you in every action-packed scene.

This is not a theatre where you simply sit in your seat and watch a show. The ride lifts you into the air and suspends you in front of a circular screen where the experience is all around you. The physical movement of the seats moving in correlation with how the camera was filming is just part of the ride.

“It's in front of you, below you, sometimes it's even happening above you,” Rothschild says. “You are fully immersed in the environment.”

The sounds of the soundtrack, the smells coinciding with the landscapes in the film, and the sensation of the wind against your face as you soar above the breathtaking scenery all add to the feeling of flying.

Hundreds of Hours of Filming

The Real Wild West and Legendary Iceland rides are both under 9 minutes long, but the filming amassed over 200 hours of footage.

The Real Wild West is an adrenaline-pumping film, and one scene follows two wingsuiters as they soar through the Stehekin Valley. The film captures the beauty of the Cascade Mountains from a unique perspective, and the 8K camera mounted on the helmet of one wingsuiter gives viewers a front-row seat to the action.

The wingsuiters are expert stunt people who put their lives on the line to provide audiences with an unforgettable experience. The Real Wild West is an exhilarating film that will leave you on the edge of your seat.

In Legendary Iceland, you will soar across iconic locations like Breiðamerkurjökull Glacier, Mountains of Hörgársveit, Island of Elliðaey, Aldeyjarfoss Waterfalls, City of Reykjavík, and more. The film was shot over six months in all seasons to capture the country's diverse landscapes. The result is a stunningly beautiful film that takes you on an unforgettable journey through one of the world's most amazing countries.

Currently, there are three FlyOver locations: Vancouver, Iceland, and Las Vegas. FlyOver recently announced that new locations in Toronto and Chicago would be opening in 2024. These new locations will be owned and operated by Pursuit and will bring the total number of FlyOver attractions for the global tourism and hospitality brand to five.

All FlyOver locations are destinations in their own right. For example, FlyOver in Las Vegas has a prime location on the iconic strip, FlyOver Vancouver is perched at the end of the pier at Canada Place, and FlyOver Iceland is located in the heart of Reykjavik.

Whether you're a thrill-seeker or simply looking for a unique and breathtaking experience, FlyOver is sure to delight riders of all ages. Soar above some of the world's most iconic locations and natural wonders in an immersive, state-of-the-art experience that makes you feel like you've truly flown.

This article was produced by Karpiak Caravan and syndicated by Wealth of Geeks.

How Can Spending Now Turn Into Travel Later? Find Out.