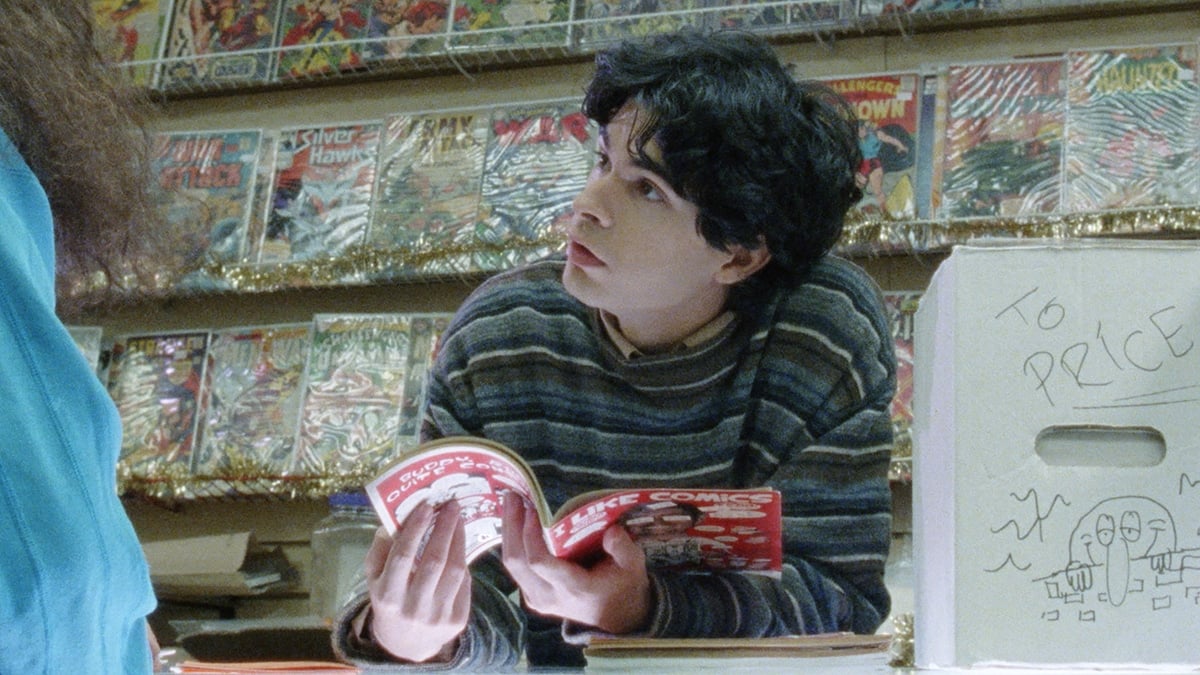 There’s nothing quite like the nihilism of the young and privileged. At least Owen Kline, the writer and director of Funny Pages, doesn’t exactly try to pretty it up. In any sense.

That goes for the comics of the young anti-hero Robert (Daniel Zolghadri) and the grimy surroundings he takes a kind of twisted pride in embedding himself in after he decides to forgo college and middle-class comforts to strike out on his own and make it as a cartoonist. And since no one in Funny Pages seems to have heard of the words ‘gap year,' everyone involved can’t help but take it seriously.

In spite of his status as Hollywood royalty (he’s the son of Kevin Kline and Phoebe Cates), Owen Kline has a keen sense of the economics of poverty and privilege. He makes few excuses for Robert’s actions, which are often despicable, and his refusal to look inward, let alone come to terms with how his identity allows him to get away with truly asinine acts with few consequences.

At least until even his luck runs out. Even the movie’s setting in New Jersey is indicative of Kline’s refusal to stoop to anything that stinks of coolness.

In other words, Kline knows gritty, and he’s determined to show his audience the full extent of his knowledge (and on the faces of his cast; there’s a lotta acne). And he will find plenty of eager acolytes in a time where young white men are expected to face actual consequences, and we are openly discussing how class shapes many a future.

But Kline very conveniently forgets how privileged the film’s sense of nihilism really is. What is ultimately more privileged than the ability to eschew any sense of catering to your audience, including closure?

Part of the reason is Robert’s insistence on taking to the worst mentors. His art teacher Mr. Katano (Stephen Adly Guirgis), could be a creep or the most unconventional of educators for stripping down naked and insisting that Robert sketch him in all of his glory. But his life is cut short right before his young’s student’s eyes, ensuring his legacy in Robert’s mind.

He then becomes determined that former comics colorist/comic artist Wallace (Matthew Maher) will be his guide on the next stage of his artistic journey. Those who mostly know Maher as half of one of the most beloved couples on the pirate series Our Flag Means Death should be warned – Wallace is another breed of discomfort entirely. Or, more accurately, an irredeemable, unstable, havoc-inducing force of nature.

The result is a darkly funny clash of worlds; an odyssey that Kline is determined will mean nothing at all.

But it does prove something – how middle-class comforts will only become more treasured in a world where it’s the only shelter a vulnerable, idiotic 18-year-old kid has against the sheer viciousness of an omnipresent need, including a woman in a wheelchair tearfully begging for Percocet in a pharmacy.

Working class life is nothing to be romanticized in a time when the already feeble safety net threatens to come apart entirely. Still, there’s also far more to it than the endless parade of utterly depressing depravity that is once again all about the middle-class tourist in their midst.

Owen Kline is clearly on the cusp of a long career, so hopefully, he’ll at least skewer the upper classes as a whole in the future. It beats heaping scorn on one representative whose unlikability is merely an outlier compared to the far more impoverished he and the movie outright fetishize as indicators of how far we’ve fallen.