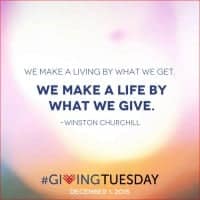 Everybody knows about Black Friday & Cyber Monday, the two largest days of the Christmas shopping season, but what about #GivingTuesday?  This “spending day” isn't a household name yet as it only began in 2012.  Giving Tuesday is a concept that I am happy to be promoted on an international level!  If you haven't read a lot on Money Buffalo yet, I believe charity it is an important piece of being financially literate and is also “Unique Christmas Gift Idea #5.”

Some Quick Stats on #GivingTuesday:

I started this post off with a quote by Winston Churchill and I think his words still strongly resonate today.  A century ago, The Carnegie library system built libraries in small cities throughout the United States and is part of the legacy of businessman Andrew Carnegie.  Today, country music star Dolly Parton and her Imagination Library program has donated over 60 million children's books to families in the United States, Canada, Australia, and the United Kingdom

Your identity is defined by how you spend your money.  What do I mean?  If you live a lifestyle of parties, fast cars, and smoking fine cigars, you will probably gain the reputation of seeking a good time.  Somebody who stays home on a Friday night to read a book instead, won't be know as the “life of the party.”  If I need to borrow $5 who am I more willing to ask first?  Going off assumptions, I would ask the bookworm because I'm assuming that Mr. Popular has already blown through all his cash like it was going out of style.

So how do the words of Churchill fit into Giving Tuesday?  We all make money & spend it on things we need and want.  Life can be more rewarding by donating your money or time to somebody that doesn't have what you are giving them.  If you don't believe me, drop your loose change into the Salvation Army kettle for starters.  Even “The

Grinch” found the joy of Christmas by giving back the presents he stole.  Perhaps the old adage, “It's better to give than receive” isn't an Old Wives Tale.

I'm not trying to make this article feel idealistic or an admonishment on people who like to buy the latest gadget, but giving & charity is an integral part of humanity.  How many times have people helped you in your life?  You might not think of an example immediately, but perhaps it was a hiring manager of a company that decided to choose inexperienced you over more-qualified candidates.

Why Giving Tuesday Is Important

I've elaborated on the importance of charity already.  We already know that Giving Tuesday occurs on the Tuesday after Thanksgiving.  For a month now, people have been getting their inboxes flooded with “good deals” that can be purchased beginning 6 p.m. Thanksgiving Day to 11:59pm on Cyber Monday.

In the five-day stretch from Thanksgiving to Cyber Monday, the Western world spends a crazy amount of money buying things for themselves & their family.  Every year, I cringe to look at the news because I really don't want to see people stampeding into a store to buy a flat screen TV at a steep discount.

Like the flip of a switch, people go from being the kindest around the Thanksgiving table to the akin of savages fighting for commercial goods like they are the last drop of clean water.

What if people used that same energy for Black Friday deals to give to their favorite charity instead?  I dare to say that if people were to donate as much money as they spend during this 5-day stretch or buying Christmas gifts for the person that already has “everything,” the world would be a better place.  More people who have nothing would have something.

#GivingTuesday is a creative capitalistic opportunity to motivate people to donate to a charity.  It is on the tail-end of the five-day stretch when consumers have ingrained mentality of “Me, Me, Me.”  So after five days of looking inward, there is one day to look outward towards others.  I would say that this is the unofficial “day of charity” as more people will know that #GivingTuesday exists but a select few know that September 5th is the official “International Day of Charity.”

A secondary reason for why Giving Tuesday is important, is because it is a year-end reminder for people to maximize their charitable deductions.  Although I personally believe that the primary motive for charity is the desire to help others, not for personal glory or tax deductions, if the IRS (or your respective tax agency) is going to “reward” you for giving why not take advantage of the tax code.  If I'm going to be spending the money anyway, I would rather give it to a charitable organization that can do good things than let Uncle Sam keep it.

Your charity might even have a matching challenge on Giving Tuesday!  For example, an anonymous donor will match every dollar donated up to $10,000.  Or for every $100 donated, the organization will donate an extra piece of clothing.  As the day gains more popularity and traction, I predict you will see more organizations with matching challenges.

Why we don't need Giving Tuesday

You probably were not expecting this header in a post that is promoting Giving Tuesday.  While Giving Tuesday is great, particularly for those that might only give once per year, charity should be happening year-round.

My wife & I have charitable donations that are automatically deducted every month on the same day.  Part of our monthly household budget is that a specified amount of money is set aside for donations.  We also donate extra money, throughout the year as we feel necessary.  Studies have shown that households that regularly budget for charitable donations are typically more financially responsible!

Another “charity” concept that I just discovered this year is a children's book called The Sparkle Box.  It too was created in 2012 & its purpose is to teach the importance of helping others.  This following sentence is a small spoiler alert, but you write the various good deeds performed & put them in the “Sparkle Box” that is opened at Christmas as the gift to others.

We don't need a day or a book to tell us to give.  Charity should be a natural behavior.  If you have money, give money to the charity of your choice.  If you want to give your time instead, that is excellent as volunteers are just as vital as cash.  If you can donate a little of both, even better.

Do I Need To Give On Giving Tuesday?

In my opinion, No.  I think Giving Tuesday or #GivingTuesday, whichever term you prefer to call it, is a great reminder for people to look at their spending priorities & if their money is being spent wisely.  This reminder is especially timely with all the hustle and bustle of the Christmas shopping season that surrounds this single day.

I think it's a great idea to give on #GivingTuesday and I encourage every person to do so that has the desire to give their money or time.  Especially if your charity has a matching challenge to capitalize fully on another person's generosity.  If you are looking to make a year-end donation to maximize your tax deductions, the matching challenge can be a “double-dip” of sorts.

If you want to give on Giving Tuesday, I am not holding anybody back.  But I ask everyone to consider giving the other 364 days of the year.  With all the Black Friday & Cyber Monday madness beginning earlier every year, perhaps the “Season of Giving” can begin before the leaves change color as well!

Do you plan to give on #GivingTuesday?  Is charity part of your household budget?

Thanks For Reading & Happy #GivingTuesday,

How the Test Launch of the Tie Fighter Prototype for Filming of a New Hope Went Terribly, Terribly Wrong.