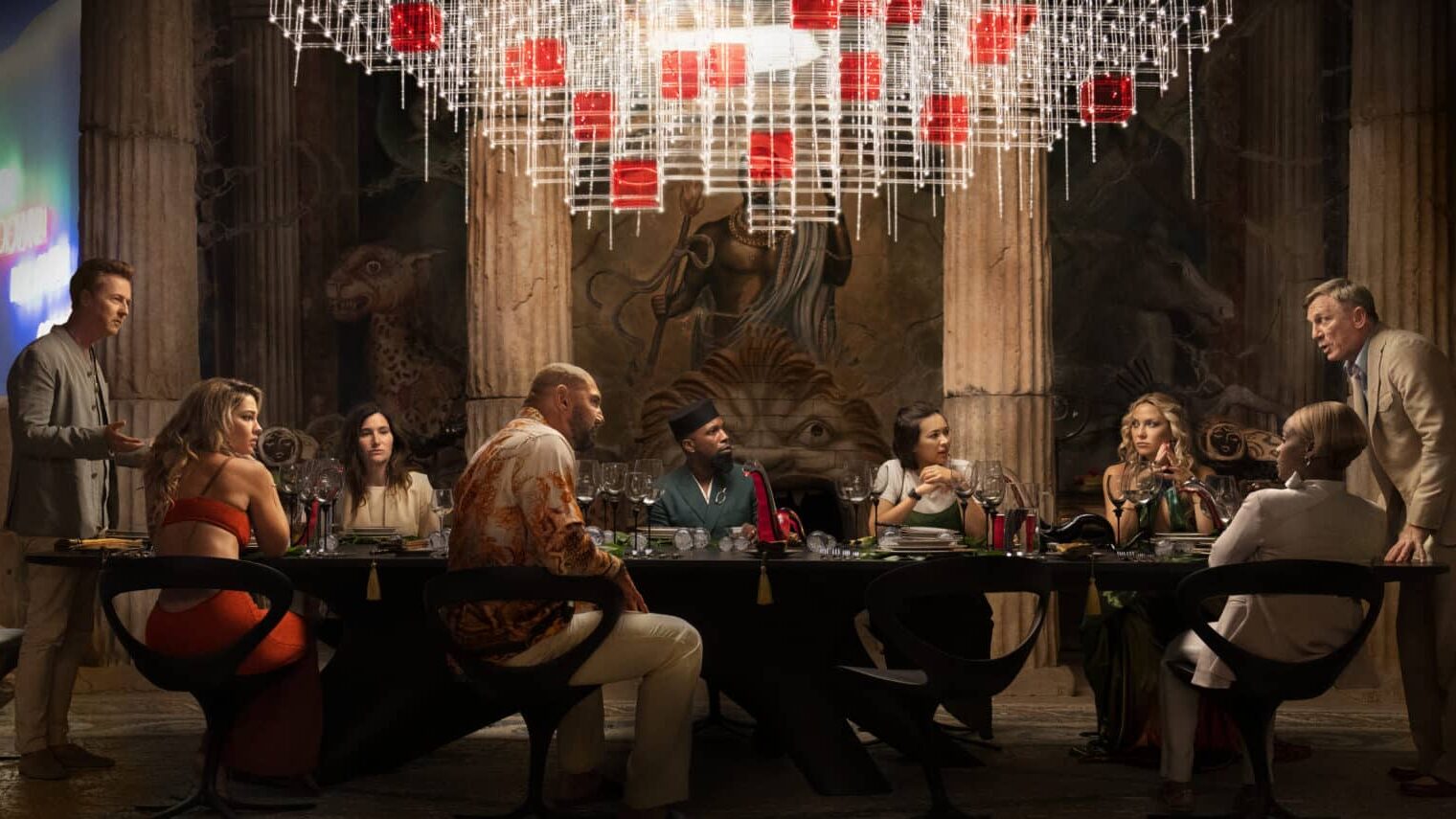 Knives Out may not have been the first movie to kick off the current A-list ensemble cast whodunnit resurgence, but it’s easily the best of the bunch we’ve had. Or at least it was until now.

Glass Onion, or Glass Onion: A Knives Out Mystery, surpasses its predecessor in nearly every way. “Nearly” because the mystery of Glass Onion isn’t quite as surprising as the one in Knives Out. But even that becomes a feature, not a bug, as it allows the film to focus on its greatest strengths as an ensemble comedy.

An Ensemble Comedy in Whodunnit Clothing

Glass Onion feels closer to a Howard Hawks comedy or one of Soderberg’s Oceans films than a mystery film. More than Agatha Christie, Glass Onion evokes 1985’s Clue, a movie that famously includes three different endings. Not to say Glass Onion isn’t brilliantly constructed. Writer and director Rian Johnson once again beautifully subverts expectations and frequently rearranges and reorients pieces of the puzzle before everything clicks perfectly into place, but that’s never the film’s focus.

The focus is spending time with the larger-than-life characters the film introduces. The only returning character is Daniel Craig’s Southern detective Benoit Blanc. He’s surrounded by new suspects, all of whom bring their own specific flavor to the proceedings. The best among them are Kate Hudson as Birdie Jay, a model turned fashion designer with a penchant for racial and cultural insensitivity, and Janelle Monáe as Cassandra “Andi” Brand, the brilliant but cold woman forced out of the tech empire that connects the ensemble.

Miles Bron (Edward Norton) now rules that empire. And as ruler, he has gathered his friends for a weekend getaway on his private island, where they will play a murder mystery game. But, of course, things soon become more than a game when an actual death strikes the island. Yet that death takes its time to strike, allowing the film to bask in the glory of an ensemble that includes Dave Bautista as an insecure men’s rights activist and Kathryn Hahn as a constantly frazzled housewife turned politician.

Beyond the joy of spending time with these characters, the film takes place on a stunningly beautiful Greek island creating a movie that doesn’t even need a plot to be successful. There’s visual delight in every frame, whether we’re looking at beautiful people, the gorgeous landscape, or the ostentatious architecture of the titular Glass Onion villa.

Where Glass Onion excels is its ability to include extremely timely conversation pieces without sacrificing its jaunty tone. Unfortunately, far too many films in recent memory have felt as though they are bending over backward to “engage in discourse” to ensure their relevance.

These attempts at relevance often come in the form of overly reverential and awkward momentum-breaking conversations about identity or trauma. Scenes in which films seem to be begging the audience to see how seriously they take these things. Glass Onion, on the other hand, deals with issues like offensive tweets and men’s rights Twitch streaming as part of the landscape of life in the 21st century.

There’s an irreverence that feels real and honest. Even though these characters are over the top, the way they talk about these issues feels more authentic (and less forced) than almost any movie that attempts to take them seriously. That irreverence is also precisely why Glass Onion, like Knives Out before it, works as a piece of social commentary, or at least socially and politically conscious entertainment. The film never feels desperate for its audience’s approval. Instead, it delivers a hilariously satisfying takedown of white male mediocrity and entitlement without pausing to congratulate itself.

Glass Onion plays a similar trick on its audience as Knives Out near the middle of the film, but it never feels like it’s retreading the first film. In fact, more than a repetition, it plays like a possible promise for a new gimmick of a burgeoning franchise. Like Knives Out, Glass Onion plays so many tricks with our assumptions about whodunnit plot structures that the subversions all feel joyously exciting instead of hamfisted or overly smug. And because there are so many tropes that have been built up over the last hundred or so years of these stories, it seems like Johnson has enough to play with for at least three more Benoit Blanc adventures.

Personally, I hope we get to see a new Benoit Blanc film every few years, each with a star-studded cast and perfectly quotable dialogue. Whether they would all be as crowd-pleasing and satisfying as Glass Onion is hard to say, as it sets high, but then again, so did Knives Out.

Glass Onion will have a week long theatrical run beginning November 23 and will premiere on Netflix on December 23.