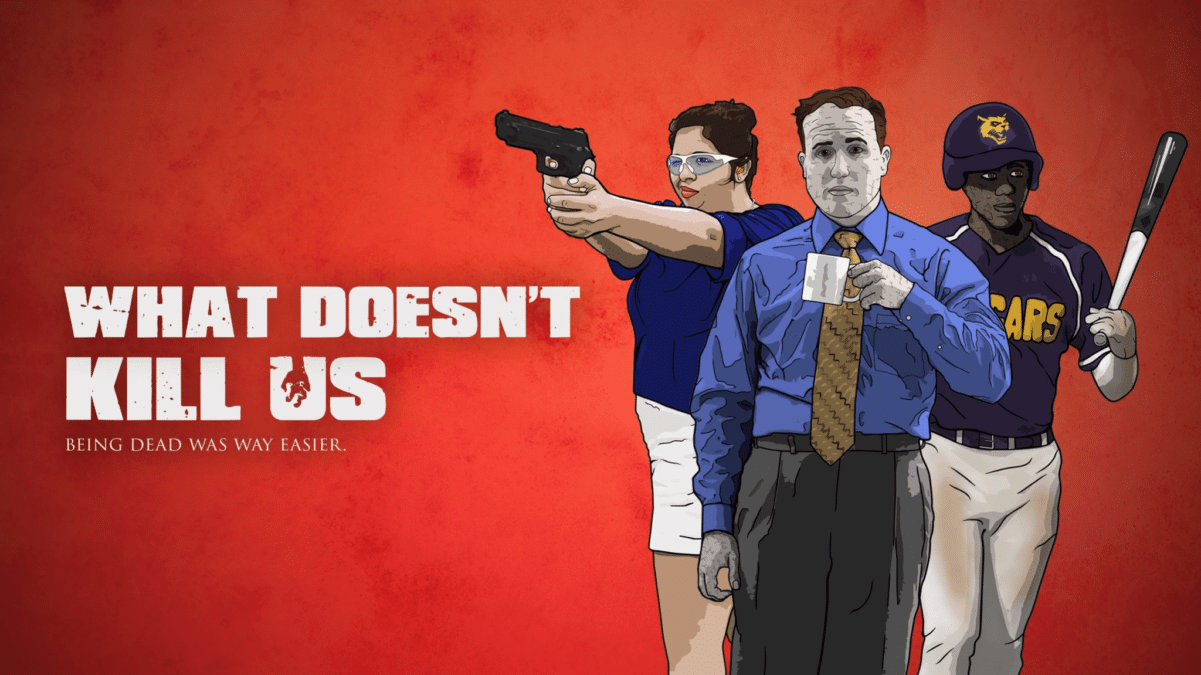 A premise is a terrible thing to waste. Especially when the timing is worse than usual.

True, there was never going to be a good time for the extremely low-budget zomedy What Doesn’t Kill Us, but watching it now leaves an especially bad taste.

What Doesn’t Kill Us seems well poised to take full advantage of the mockumentary format by following various people who are sentient zombies, or necrosapiens as they’re now called. In a letdown akin to basically everything that happens after the first five minutes of La La Land, which gave us a joyous, bittersweet ode to Los Angeles and the dazzlingly diverse dreamers who are irresistibly drawn there, What Doesn’t Kill Us shows us various necrosapiens speaking of their complicated feelings towards the word zombie and the various stereotypes they encounter in their daily lives, only to prioritize white male angst.

Give it a chance, and this alt history version of 2016 only gets worse. Wish fulfillment would be an understandable, even sympathetic impulse, but this movie is more of a textbook case of how many men believe the world works against all evidence to the contrary.

The movie can’t even seem to decide on a direction, whether it wants the story of a zombie outbreak that led to the creation of a cure which allowed the undead to regain sentience and live normal lives to be a character-driven comedy or a political satire. It seems to want to parody some of our current politics by having a necrosapien candidate for public office, then decides to focus on one of his campaign workers, the very human Bridget (Tevia Loeser), a cartoonish stereotype of a young female Democratic activist.

Others the movie chooses to follow at least have more consistency. There’s Jeremy (Richard Scott), a young Black necrosapien who has major league dreams but finds that the pressure and prejudice is wearing him down. Lastly, there’s Keith (Peyton Paulette) the white office drone to whom the movie devotes the most time and attention, and whose problems involve a toxic office environment that defines him by his identity and a wife whose goal is having a baby.

Spending so much time on Keith’s troubles wouldn’t be so troublingly regressive if he wasn’t given so much leeway for his bad behavior, which includes sexist dismissals of his wife’s education degree, which he actually refers to as an MRS, and letting the cameramen come into the bathroom and film her getting her pregnancy test results without her knowledge. He’s the one who’s allowed to comment on the lack of accurate zombie representation, while virtually no time is devoted to just why Bridget chose to quit school and work for a necrosapien political candidate, or just what lies behind Jeremy’s abruptly dismal athletic performance.

But what will really cause many viewers to grit their teeth is the ultimate takeaway, which is basically not to take attacks on our basic rights so personally. Jeremy is told he needs to grow a thicker skin, Bridget is told she made a fool of herself for standing up to bigots and that she needs to get a hobby, and even Keith learns to relax and enjoy stereotypical zombie movies. The real kicker though is Bridget being informed that no one is at war, and her method of relaxation turns out to be…shooting guns.

This is a message that hopefully few would welcome in 2022, with a rising tide of fascism rapidly stripping any and all rights from anyone who doesn’t match the description of white and rich.

No, current events are a far more savage take than What Doesn’t Kill Us or any other film could give. And this one comes at a time when such a lack of prescience (it was apparently made in 2019) simply can’t be dismissed so easily anymore. If there’s one thing that could provide a kind of relief, it’s that there’s also no shortage of zomedy offerings anymore either.

What Doesn't Kill Us is available on most VOD streaming platforms.

For the latest on movies now in theaters, follow us here.

20 Modern Films With an Old-Fashioned and Vintage Style