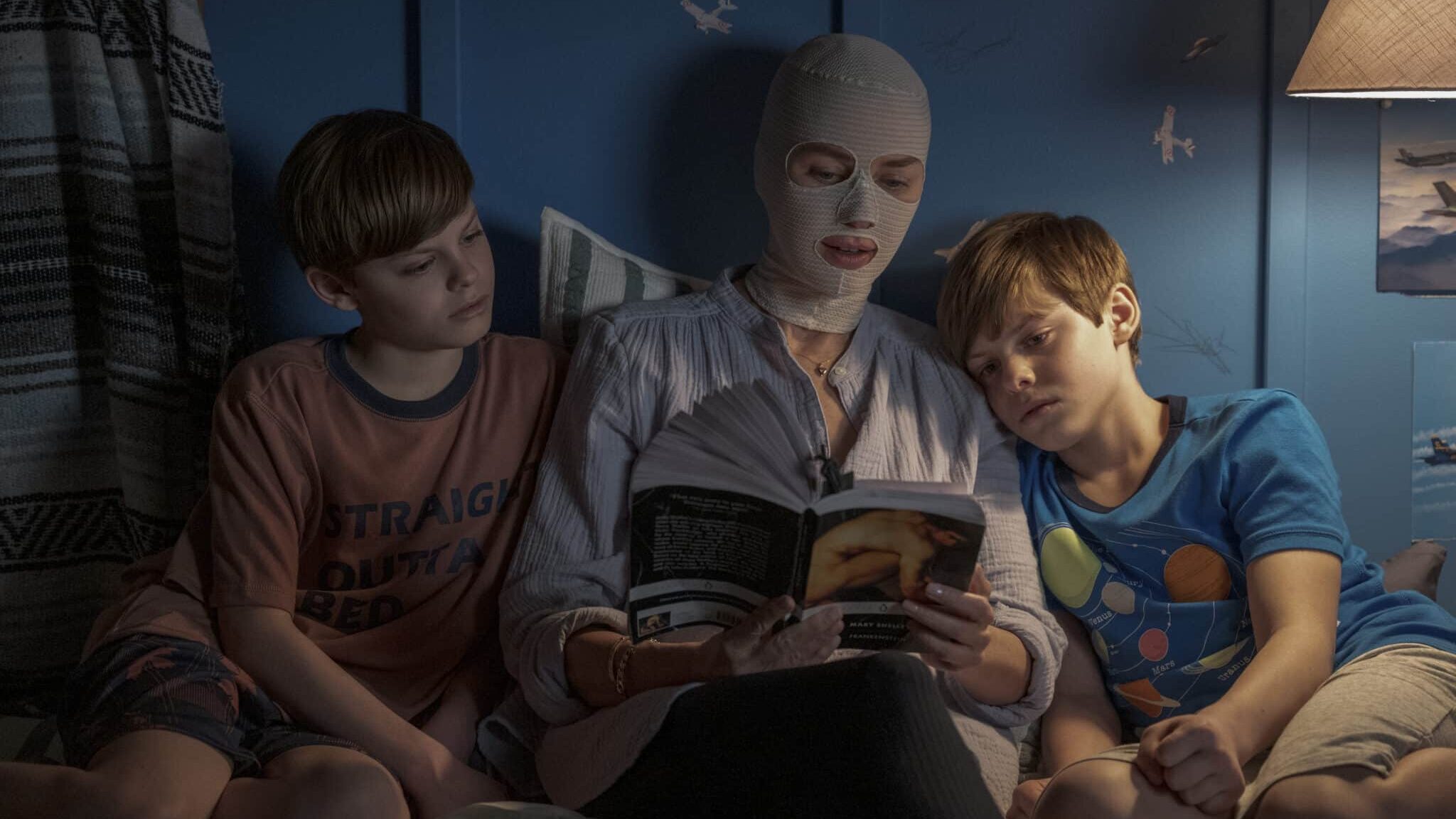 The year 2022 has seen some absolutely terrible remakes of great films.

You will not find many worse films than Firestarter (2022) and  Texas Chainsaw Massacre (2022).

Matt Sobel’s Goodnight Mommy, a remake of the 2014 German film by Veronika Franz and Severin Fiala, is nowhere near those levels of badness. Neither is it a revelation though. Instead, it’s a faithful, if somewhat bowdlerized, recreation, which seems to exist mostly for American viewers who refuse to read subtitles.

Twice Is the Charm

As viewers of the original film know, the plot is based on a big twist reveal towards the end. The new version does little to tamper with it.

Identical twins Elias (Cameron Crovetti) and Lucas (Nicholas Crovetti) are dropped off at the remote vacation property where their minor celebrity mom (Naomi Watts) is recovering from facial surgery. The boys are disturbed when they see her bandaged face.  Even worse, Mom is behaving somewhat erratically. She won’t sing the kids her usual lullaby, she seems to have taken up smoking. She also has an erratic and unpredictable temper.

The boys start to suspect she isn’t their mother at all, but an imposter. They try to escape, and then they try to find their real mom. The violence escalates. And then there’s the twist, which makes you reconsider everything that came before.

Naomi Watts, who spends much of the film with her face covered, does a fine job with a tricky role. She projects both sincere affection and a real capacity for violence, which keeps you wondering whether she is or isn’t what the boys think. The Crovetti twins are perhaps even better. The movie hinges on its child actors and on their negotiation of reality and fantasy worlds. If they weren’t top-notch, the whole thing would fall apart.

The main changes here from the original film are in the interest of less squick and more clarity. The German film didn’t really hold your hand much through the big reveal; you either caught on or you didn’t. This version is determined to make sure that you get the point. It throws in a flashback montage, and a lot (a lot) more exposition.

In a parallel effort to clean things up for a mainstream audience, the boys in this version don’t have a huge, repulsive bug collection. Also, no pet dies. And, in general, the violence is significantly ratcheted down. The original was unquestionably a horror movie. This one might be better characterized as psychological suspense.

The most interesting scene is one which unexpectedly introduces a tinge of queasy sexuality. The boys, hidden, watch their mom dance provocatively for the mirror with her bandaged face. An odd primal scene, it underlines the ways in which children don’t always know the entirety of their parents’ lives. The movie doesn’t improve on the original for the most part, but in adding that scene, it does.

Dance With the Mom That Brung You

Improving on the original shouldn’t necessarily be that hard, though. The German Goodnight Mommy was a decent film, but not a great one. That twisty plot relies on abandoning its most interesting and powerful themes—as the remake shows once again.

The symbolic power of the film is in its representation of child abuse from a child’s perspective. Elias and Lucas’ mother is a loving, caring woman who would never hurt them. And then, at the same time, she is this other woman who flies into a rage when they lock their door, strikes them, destroys their things, and devises innovative ways to hurt them.

The boys’ conclusion that their mother is not their mother seems paranoid and fanciful. But it has a metaphorical truth. An abusive parent is the parent you love. And then she’s also someone else, a monster who has taken the loved parent’s shape.

The movie’s most effective moments are when you feel the terror of that and the helplessness. The monster who is the parent is bigger and strong. No one will help you escape from them. Your only hope is that the real mother will come back—but where is she if not standing before you?

But Goodnight Mommy, in both its iterations, almost seems scared of this insight into real terror. It backs away from it quickly, into a less charged, and less convincing, story about grief and the dangers of different doubles.

The loss of emotional resonance is, again, in the interest of that big hidden revelation. This is why I am not a fan of horror movies, like The Sixth Sense, which are constructed around a big spoiler warning.

Yes, surprising the viewer can be fun if you’re in a mystery whodunnit, where solving the puzzle is the point. But if you’re dealing with lasting trauma—well, trauma isn’t exactly a surprise. It’s the absence of surprise in a lot of ways; a day after day tedious weight that you can’t shift out from under. When you’re done with watching Goodnight Mommy, in either version, you have the uncomfortable feeling that the movie you saw wasn’t the real movie, but a vision designed to keep you from thinking about the real horrors.

Gen Z Is Lonely Thanks to “Flexible” Remote Work, Falling Behind