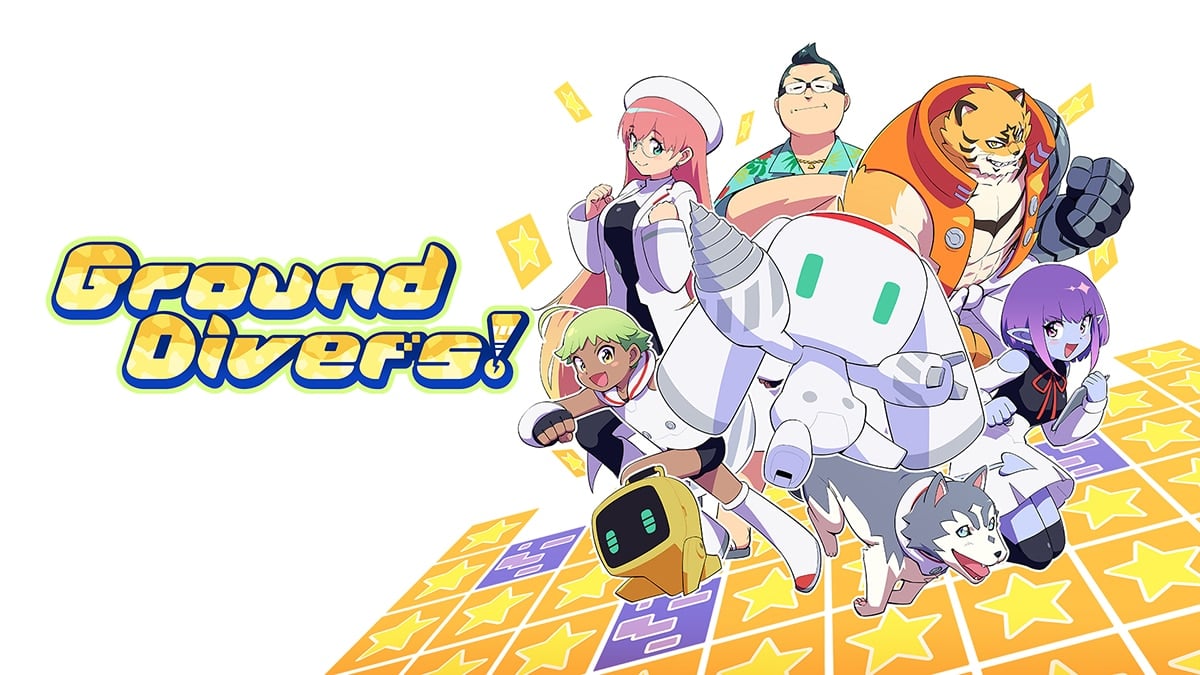 Ground Divers! is a charming arcade-style game chock full of personality. It takes place in a dystopian-style reality where humans have depleted all of the earth’s energy resources, creating widespread suffering and war. However, when a mysterious figure introduces the people of the world to a strange substance called Rare Matter, people begin to hope again. But before long, the strange figure disappears.

As people clamored to discover more sources of Rare Matter for themselves, they began to build teams of Ground Divers to penetrate deep under the earth’s surface and extract valuable minerals to create new energy sources for humanity.

Your job is to assist Anne, the scientist leading your ground diving mission. Your teammate is the bubbly and adorable Tsuruhashi, a specialty mining robot with the ability to gain strength when you cheer him on.

Your mining expeditions with Tsuruhashi are the meat of the game. Anne or one of her team members gives you the assignment to dig deep into the earth to discover rare minerals and other materials in each location. Tsuruhashi does the digging for you and even has a mind of his own.

Your job is to guide him on his journey into the deep. Each location is split into sections. To pass into the next area, you must dodge enemies and obstacles while you make your way to the bottom of the screen.

Guiding Tsuruhashi is relatively straightforward. You use pins to mark his path. Each pin costs 10 AP, so you must ensure you collect AP on your mission. You can do that by defeating enemies, but the most effective way to gain AP is by destroying special star blocks as you dig.

It’s best to avoid enemies if possible because counterattacks deplete your HP quickly. If your HP runs out, you lose all the resources you collected on the mission and must start it over again. You can use special tools you create in the Resource Shop and the power of the CHEER crystal to help you make your way through the underground maze. You will also come across stations where you can gain health and make repairs to Tsuruhashi.

You pass the CHEER energy to Tsuruhashi through a cable he leaves behind as he digs deep into the earth. When you cheer for him, he can tunnel faster, break through large sections of blocks, and defeat the most vicious of enemies.

There are extensive story sequences placed between each completed mission. I found myself growing tired of just how lengthy the stories can be, but I have to admit that each character is endearing in their own way. And not to mention, the character design is adorable.

Dorothea is obsessed with Anne and constantly fawns over her while the robots cheerfully beep to contribute to the conversation. You often have the option to skip the stories, so if you want to cut to the chase, you can skip the talk. But be warned: if you decide to skip, you may lose some crucial information to help you stay on track in the game.

Don’t let the tutorial overwhelm you when you first pick up Ground Divers! It gives you a lot of information that isn’t relevant until later in the game, which may confuse some players. My advice is to take the tutorial with a grain of salt and take the time to learn the intricacies of the game yourself.

This game is repetitive in design. There are a total of seven locations to mine, and each has about three to five sub-levels to pass. Once you complete the basic requirements, you’ll go back and have the opportunity to gain all six stars for each location. That means playing the same sections repeatedly and looking for new resources and tools to pick up.

On top of that, the strategy remains pretty constant throughout the game. While the difficulty evolves quickly, you’ll accomplish similar tasks in each location. You guide Tsuruhashi through each level and to the target resource, then move on to the next level.

That means Ground Divers! isn’t ideal for hours-long gaming sessions. Nevertheless, I enjoyed Ground Divers! as a welcome distraction during short moments of boredom. For example, I had a doctor’s appointment last week and got stuck in the waiting room for forty-five minutes. Luckily, I had my Nintendo Switch, so I pulled it out, and the time passed like a flash.

This fun, light-hearted arcade-style strategy game is an excellent addition to any gamer’s arsenal. The well-developed narrative, surprisingly detailed gameplay, and loveable characters make Ground Divers! a game that suits a wide range of players. That being said, the story sequences can be a bit of a bore, and the tutorial is unnecessarily confusing.

If you’re looking for a lowkey game with arcade and puzzle elements, I highly recommend checking out Ground Divers.

Glorious Is a Horror Movie With JK Simmons, and Not Much Else