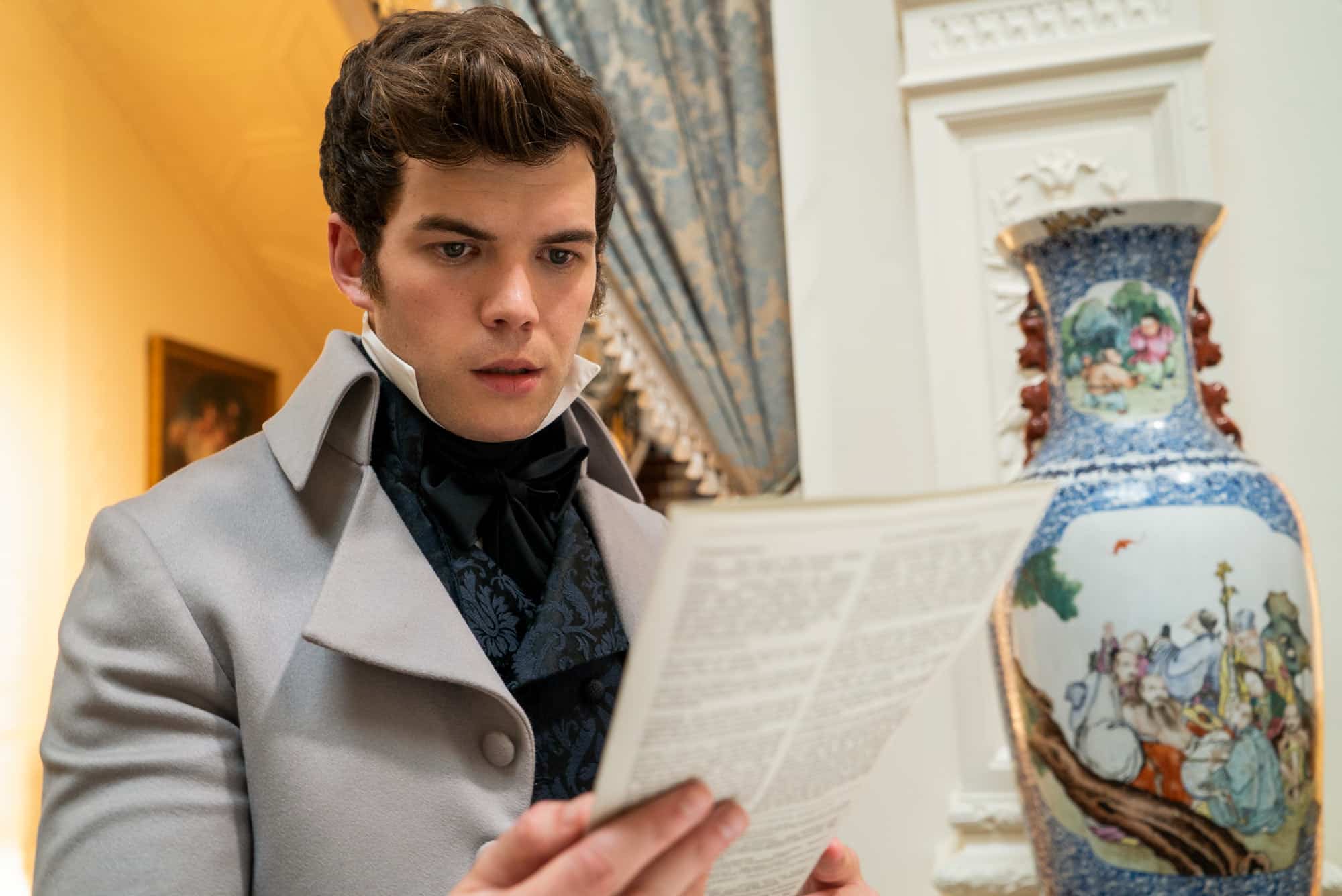 With Season 3 of Bridgerton still months and months away, fans of the book and show alike are waiting with breathless anticipation.

But if you’ve already read all the Bridgerton books and need a new way to make the wait feel just a little shorter, consider trying out another book by Bridgerton author Julia Quinn.

With a back catalog as vast as hers, it might be difficult to pinpoint where exactly to start, so we present this handy guide recommending eight Julia Quinn books to try based on your favorite Bridgerton story!

If You Liked The Duke and I: Try Just Like Heaven

It’s a tale as old as time: boy meets girl. Boy cannot be with girl because, among other reasons, she’s the younger sister of his best friend. Readers saw this in The Duke and I and this delightful little tradition is carried on in Just Like Heaven, the first book in the Smythe-Smith Quartet.

Avid Bridgerton book fans will recognize the name “Smythe-Smith” as belonging to one of the ton’s more…clueless families. As well-bred as they are, the family carries on a grand annual tradition of forming a quartet of young unmarried Smythe-Smith women to put on an annual musical during the social season. Unfortunately, none of the girls are especially good musicians, though for the most part, they are blissfully unaware of their lack of skill.

Honoria and Marcus’s love story is funny, sweet, and a great introduction to the clueless but well-meaning Smythe-Smiths as a whole. It’s not the most out-there of plots, but much like The Duke and I it is an engaging, solid romance with everything readers have come to love about the world Julia Quinn has created.

If You Liked The Viscount Who Loved Me: Try The Other Miss Bridgerton

The Other Miss Bridgerton is focused on Poppy Bridgerton, a cousin of eventual Bridgerton patriarch Edmund, and Captain Andrew Rokesby, a privateer (which is a very respectable, legal way of saying “pirate”). Poppy is in the wrong place at the wrong time, grabbed by Andrew’s men, and brought aboard the ship. Naturally, this is not a recipe for immediate friendship, but they have plenty of time to get there as the crew immediately sets sail for Portugal.

True, the plot doesn’t have much in common with The Viscount Who Loved Me, but Poppy and Andrew have the same contentious-turned-romantic vibe that Kate and Anthony display, along with crackling chemistry all wrapped up in a very engaging plot. And after all, how different are a capital-R Rake and a pirate really?

If You Liked An Offer From A Gentleman: Try A Night Like This

Of all the options, this connection is the most obvious. An Offer From A Gentleman is a Cinderella-type story, with an upstairs-downstairs romance between Sophie and Benedict. A Night Like This, the second book in the Smythe-Smith Quartet follows along in a similar vein, with a similar dynamic between the main characters Anne and Daniel.

A Night Like This has the same hallmarks of An Offer From A Gentleman that makes that book so much fun. We have a heroine who is hiding something about her identity, and high, melodramatic stakes. What sets it apart is that hero Daniel Smythe-Smith has something of a shady, dangerous air himself. He’s no easygoing Benedict, though. Daniel has a past that threatens to catch up with him and that puts both him and Anne in danger. But doesn’t that make the happy ever after all the sweeter?

First Comes Scandal follows Nicholas Rokesby, the fourth son of the family, and Georgianna Bridgerton, the younger sister of her family. An unfortunate encounter leaves Georgianna with her reputation close to ruin. Rather than forcing her to marry the man responsible, Nicolas and Georgianna marry, fully acknowledging that theirs is a marriage of convenience, not one of affection. Much like Colin and Penelope though, Nicholas and Georgianna slowly grow closer, from friends to lovers, as their two lives become intertwined.

While it’s true that friends to lovers is not my personal romance preference, I admit I like it in the historical romance setting. There’s still a layer of uncertainty there, even after the couple gets together as they try to work out what this new dynamic means for them, and the result is usually very sweet.

This is one of the slower-burn romances Quinn has written but the payoff in Nicholas and Georgianna inevitably fall in love is still just as satisfying. And if you loved Romancing Mr. Bridgerton, then you love a slow burn. At least this one is all resolved in one book rather than four!

If You Liked To Sir Phillip, With Love: Try The Lost Duke of Wyndham

If your type is big, broody heroes being thrust into a world they were not prepared for, then The Lost Duke of Wyndham is definitely worth checking out. Like Sir Philip, Jack Audley is a man with no expectation of nobility, and with a trade of his own. Unlike Sir Philip, Jack’s vocations are not necessarily the most upstanding or acceptable in polite society. A soldier is one thing, a highwayman is something else entirely.

Things change when he robs the wrong carriage, and rather than being frightened at the circumstance, the old lady within declares that Jack is the spitting image of her deceased son, and insists he come home with her because he is the rightful Duke of Wyndham. Along for the ride is Grace Eversleigh, the old woman’s companion, who helps Jack transition from the aimless existence he knew to his potential new role as a titled peer of the realm.

While Jack and Grace aren’t quite Phillip and Eloise, their story bears similarities in that much of it is set away from high society, and is a journey about reconciling the past with the present, and taking life for what it is — and naturally finding love along the way.

If You Liked When He Was Wicked: Try Mr. Cavendish, I Presume

On the flip side of The Lost Duke of Wyndham comes Mr. Cavendish, I Presume, the exact same story told from the perspective of Thomas Cavendish, the man raised to become the Duke of Wyndham until Jack’s arrival throws a wrench into things. Interestingly, the two stories occur simultaneously, dipping in and out of each other in a very interesting literary experiment.

Where Jack and Grace are figuring things out as they go, Thomas and his betrothed-since-childhood fiancée Amelia Willoughby are completely adrift. They know what roles they are expected to fill, and then quite suddenly find they might not be able — or indeed, expected — to fill them anymore. The fight is bigger than they are, and it’s all they can do to hold on to a shred of the familiar while they journey to help things comes to light.

Like Francesca and Michael in When He Was Wicked, Thomas and Amelia’s romance is the product of two people throwing societal expectations to the wind and figuring things out on their own terms, and making the active choice to be together, rather than accepting the terms laid out for them by another.

If You Liked It’s In His Kiss: Try What Happens in London

The second book in the comedic Bevelstoke series, What Happens in London, has quite a few things in common with It’s In His Kiss. Both have an intriguing central mystery the characters must work to solve, and both feature one of the main characters working as a translator. It’s true that Olivia Bevelstoke and Harry Valentine don’t have much in common with Hyacinth and Gareth per se, but the camaraderie-turned-romance dynamic is something both couples do share.

More than anything else, What Happens In London is possibly one of the funnier entries in Julia Quinn’s bibliography. One of the things Harry is tasked with in his job with the war office is to spy on Oliva and her goings-on. In an attempt to do so as naturally as possible, things often descend into absolute chaos, including one very memorable rendition of the in-universe penny dreadful novel Miss Butterworth and the Mad Baron, performed by Harry’s friend Sebastian Gray.

If You Liked On The Way To The Wedding: Try Ten Things I Love About You

Speaking of Sebastian Gray, he was such a standout in What Happens In London he got a book all his own with Ten Things I Love About You.

As in the final Bridgerton book, the couple in Ten Things I Love About You, Sebastian and Annabel are torn between wanting to be together and not being able to due to inconvenient things like guardians, secrets, and forced betrothals.

The comfort of romance novels is knowing that things always work out in the end for the couple at the heart of it all. But things between them get dragged out so long and begin to look so bleak that even the most determined of romance readers, like myself, start to despair of things ever working out for Sebastian and Annabel. The two of them are just so convinced they’ll never be happy that I found myself believing it too and I honestly have rarely been happier to be wrong.

Hiring Insights and Strategies Designed for the Future of Work